Penne, a tiny gem of Abruzzo

I bet you’ve probably never heard of Penne, a city in the Italian region of Abruzzo. However, this city played an important role in the history of Italy, was even compared to Siena and lately was named one of the Borghi più belli d’Italia: Most Beautiful Towns of Italy! Moreover, it has a strong connection to the Brioni brand.

Scroll down to learn more!

The first habitants who seem to have settled in this area in VI-V century BC were Vestini, an ancient italian tribe. When the area was conquered by Romans, they called it Pinna (aka the peak) Vestinorum because the city was built on an elevation of over 400 m. After that, its history was reflecting the situation of the whole area: in the 89 BC Penne became a fully Roman city with the Roman temples, in the 8th century it became a diocese, then it was occupied by Normans and, many centuries later, in the 18th century, by French. 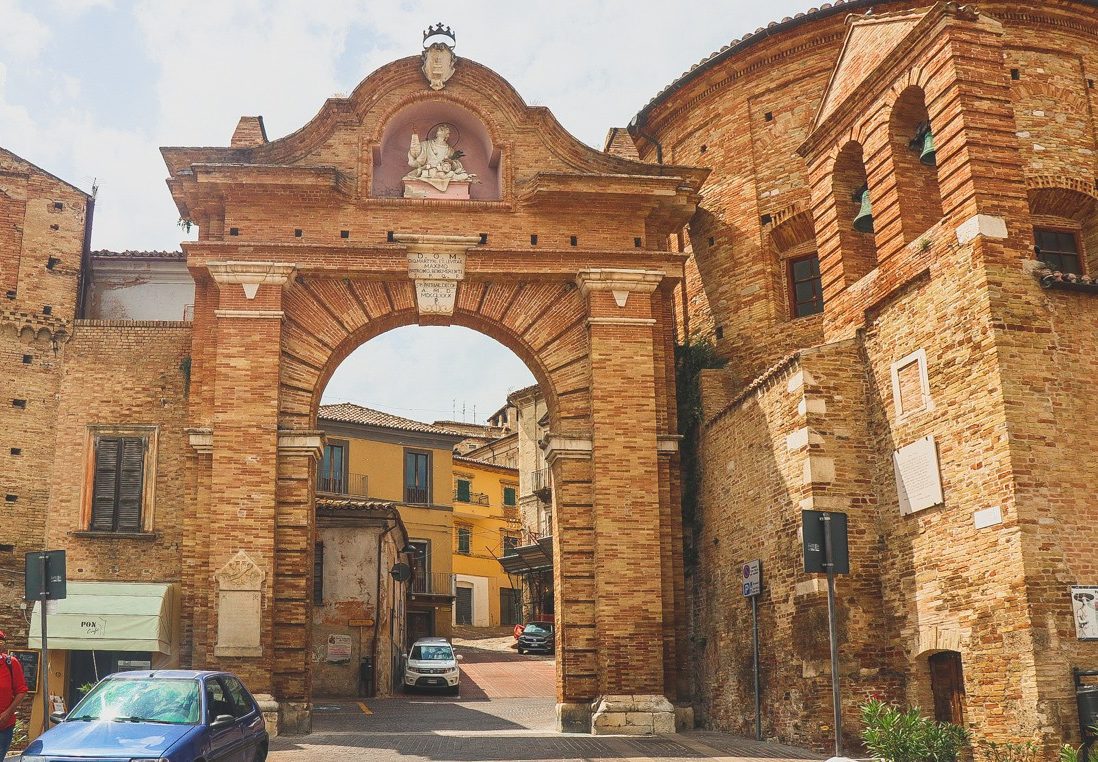 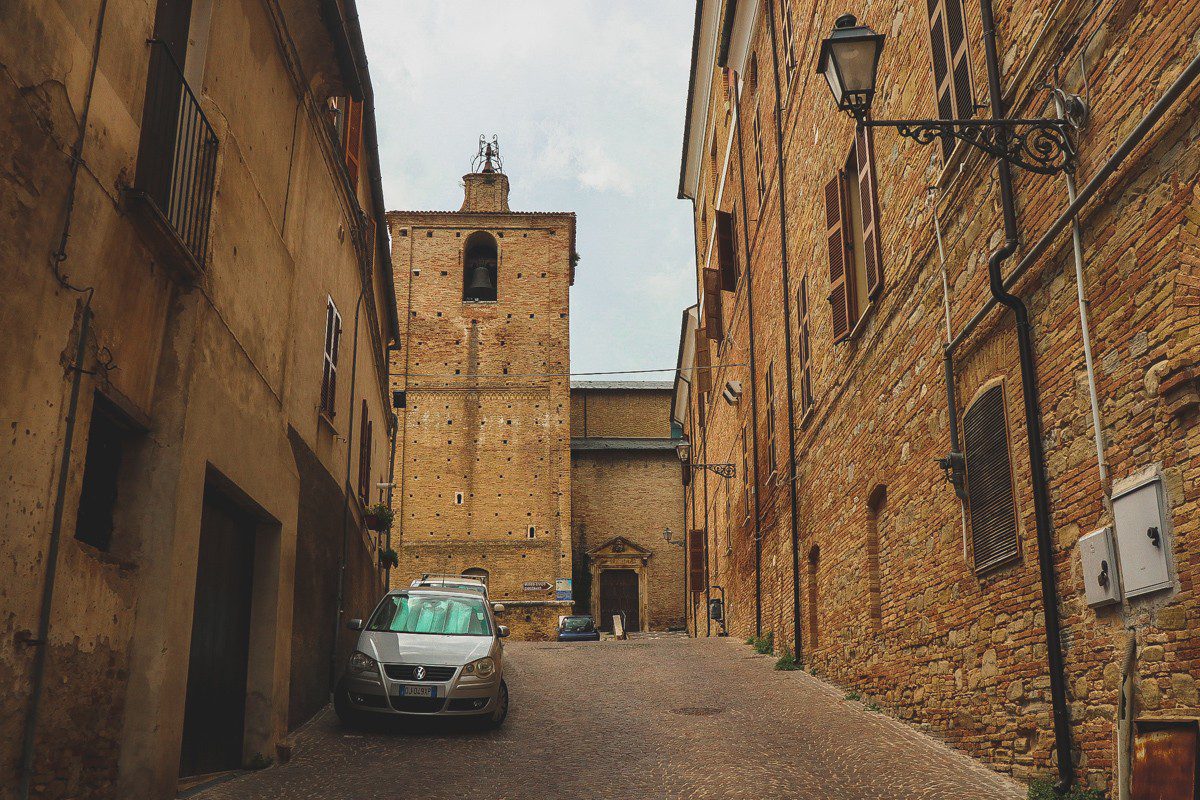 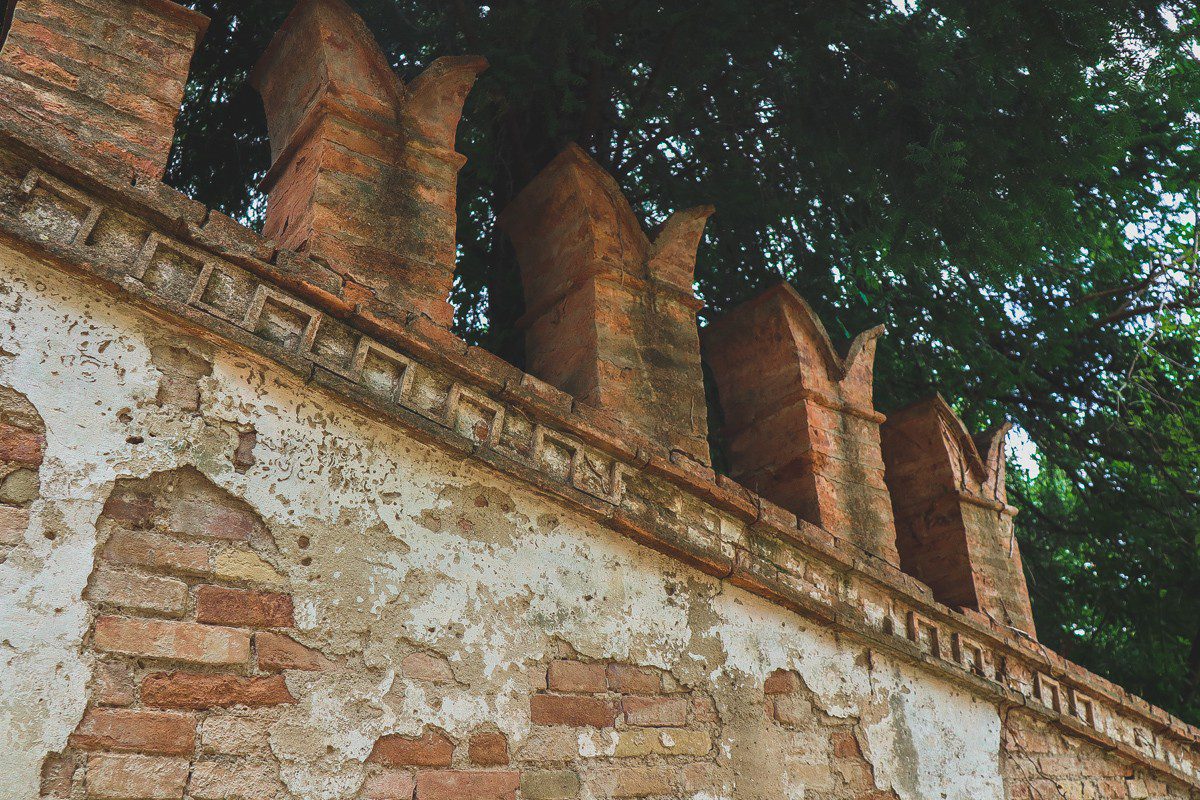 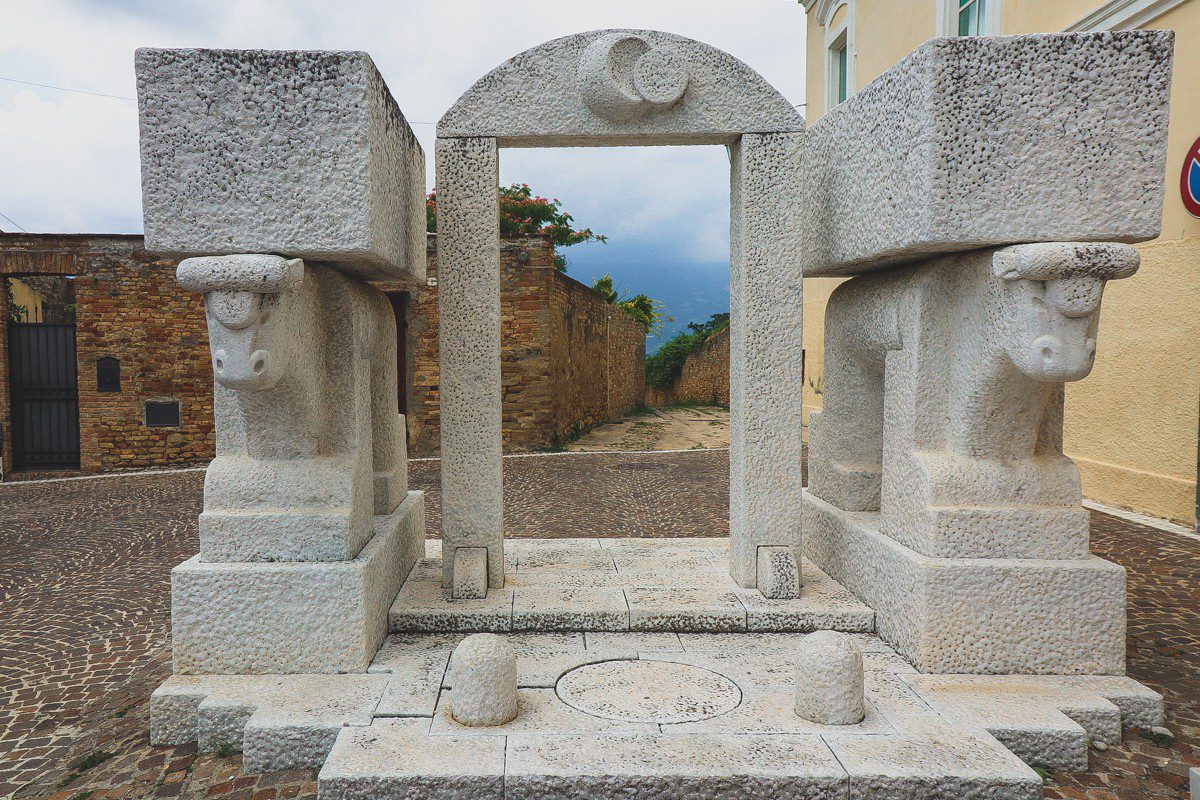 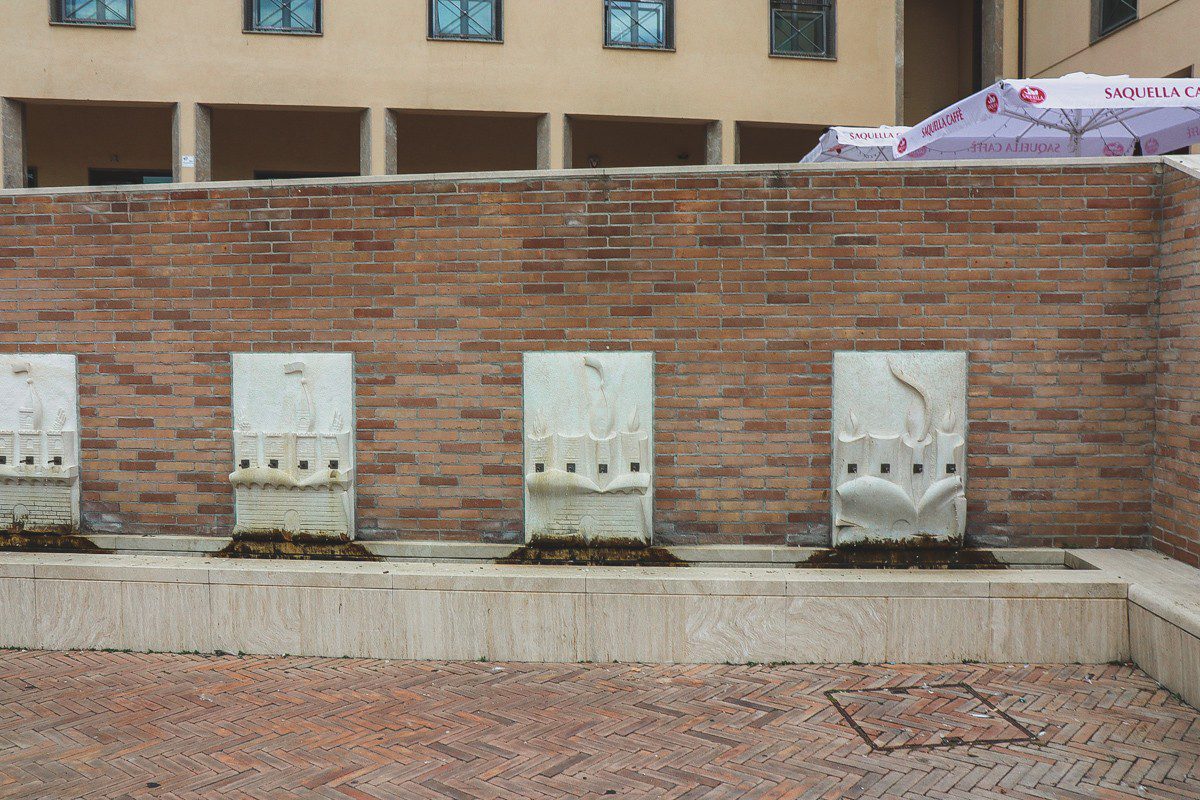 Nevertheless, probably, the most important events for Penne occured in the 16th century. In the first half of the 16th century, emperor Charles V gave Penne to his illegitimate daughter Margarita of Austria, Duchess of Florence, of Parma and Piacenza and later the Governor of Abruzzo. Thus, Penne started being associated with the richest and the most powerful families of Europe.

Recent history of Penne has its milestones too. For instance, Brioni, the worldwide renowned brand of bespoke men suits, has a very close connection to it. Brand describes this city as ‘home to the heart of the Italian men’s tailoring tradition’ and even mentions that ‘Penne is Brioni and Brioni is Penne’. Nazareno Fonticoli, one of the brand founders who was born in Penne, created an atelier here back in 1959, and the suits are still produced by the locals. 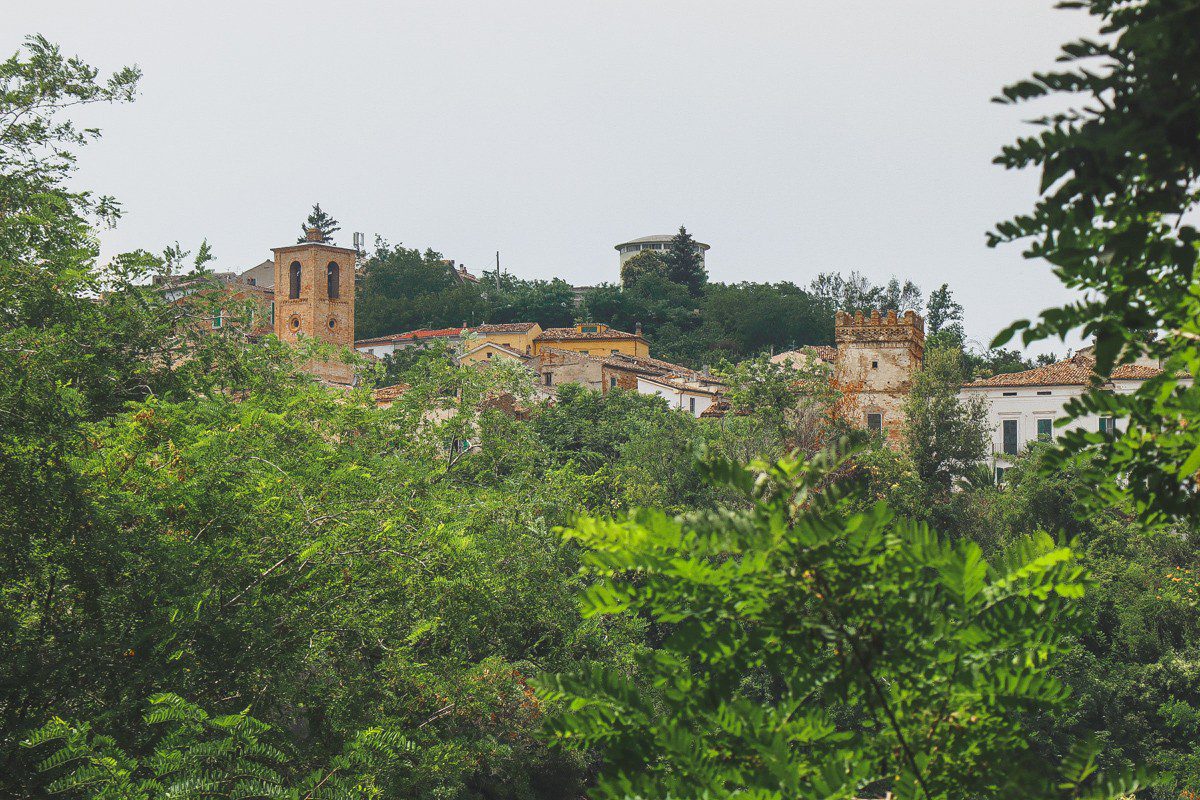 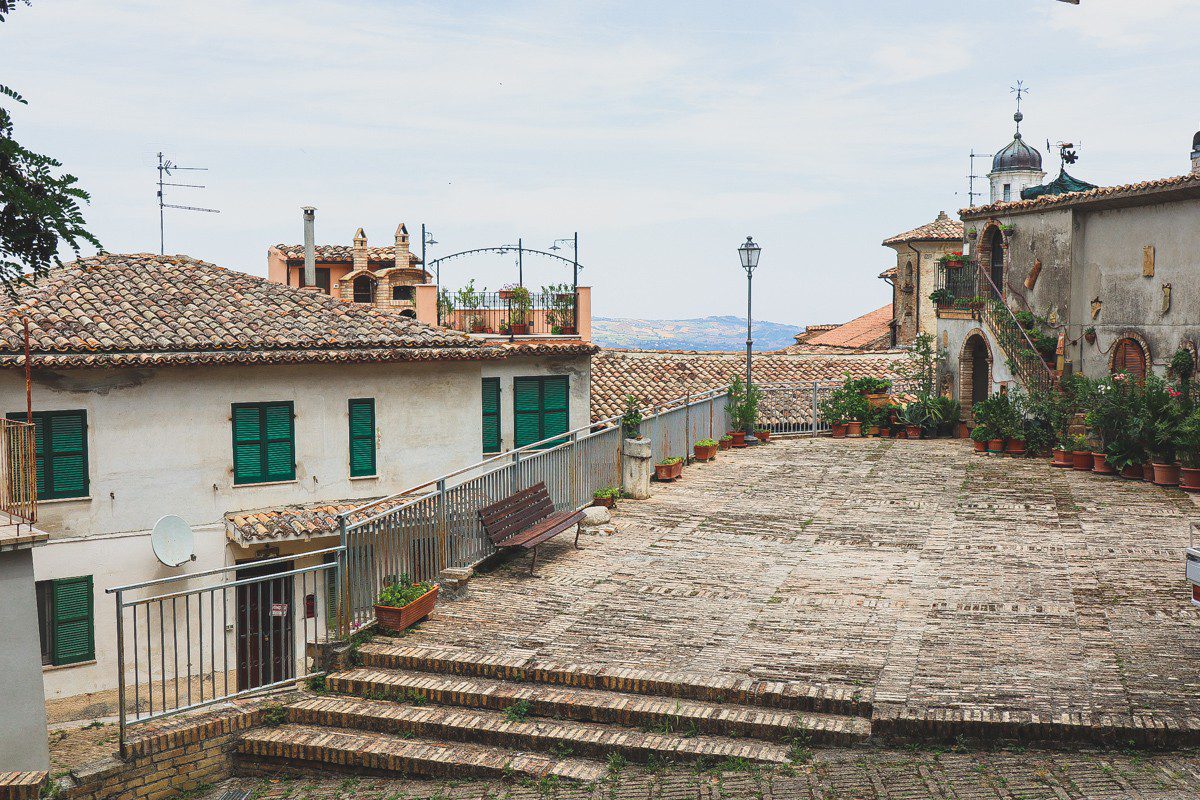 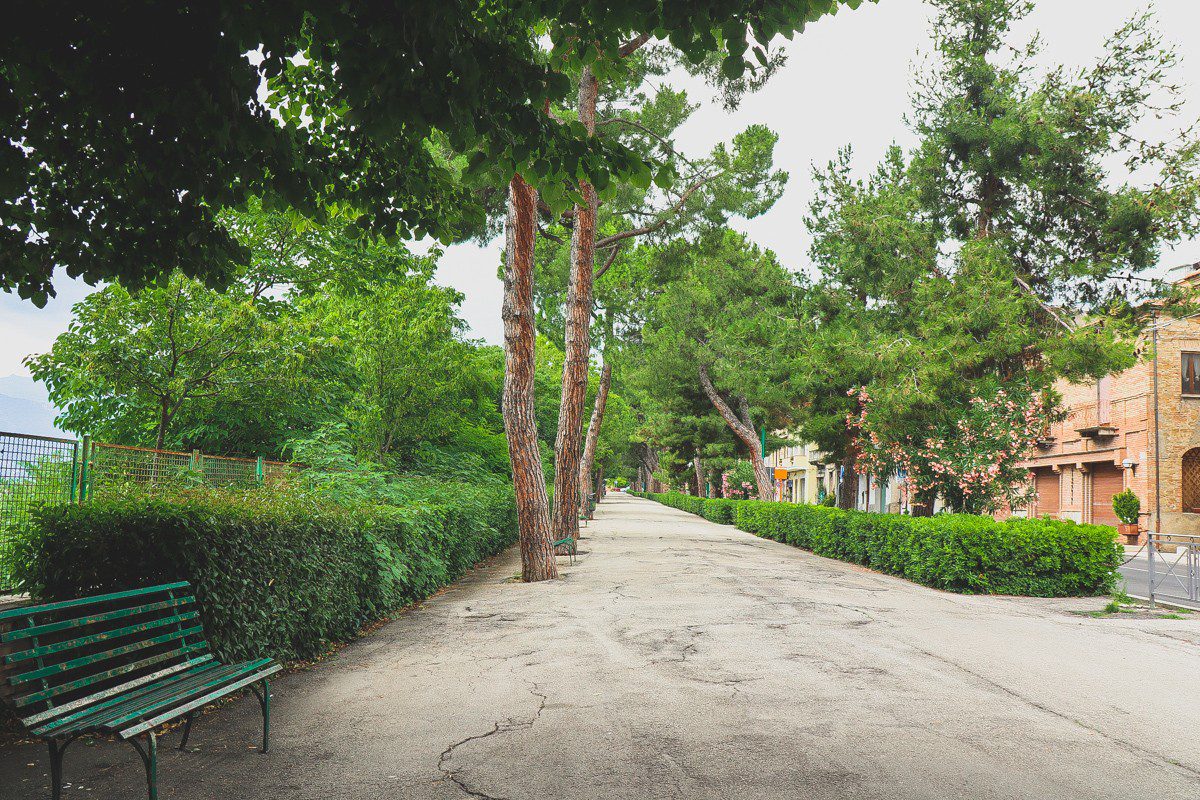 In 2012, it was named one of the Borghi più belli d’Italia: Most Beautiful Towns of Italy.

Penne was often referred to as the city of bricks, or La città del mattone. And it’s not hard to guess why looking at these photos! For the same reason, it was compared to Siena, a gorgeous tuscanian city I’ve already been writing about: the amount of brick buildings is even more impressive there!

San Francesco gates with the sculpture of San Massimo, the patron of the city (his day falls on the 7th of May), is probably the most appropriate ‘postcard-like’ view of Penne: aren’t they simply gorgeous!

One of the other notable gates in Penne is Porta della Ringa. 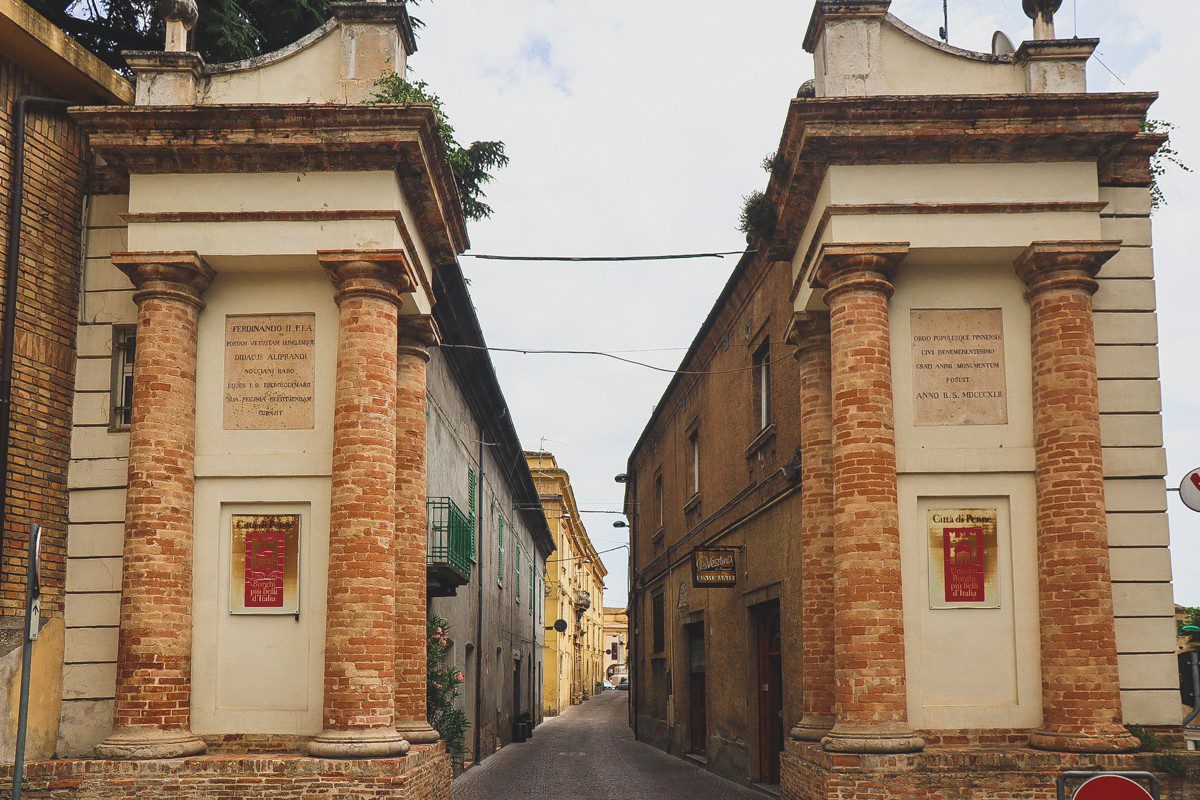 As in every respectable Italian city, Duomo situated on the top of the Holly Hill (one of four hills Penne is located on) plays the vital role in local life. This Duomo originally refers back to the crypt San Massimo on the same site and even before that, the temple dedicated to Roman goddess Vesta probably stood there too. It was first mentioned in 868 AD when the relics were moved here from Causaria and was rebuilt several times in different architectural styles. Sadly, it was heavily damaged during WWII and rebuilt almost from scratch. Museo Civico Diocesano is located on the same square.

When you walk along the city, you most probably will see many other churches too!

Palazzo Scorpio, Palazzo de Dura, Palazzo Stefanucci, Palazzo Aliprandi, Palazzo di Teseo Castiglione, Palazzo Abati, Palazzo de Paschiniis, Palazzo Vestini… Sadly, the palazzos in Penne have probably seen their best days already because now many of them are crying for a proper restoration and care. Nevertheless, you can still imagine how beautiful they must have been back in the days of their glory!

Santa Chiara’s Church dating back to the 17th century sadly was closed during our visit and we didn’t get to see the interior of it – and I believe, the best view of it you can see only from the drone shots. Nevertheless, even if you explore the city by walking as we did, you can admire the belltower from the outside!

Tip: if you travel by car, you can also visit the Chruch of Santa Maria Assunta in Colleromano nearby!

The views of Abruzzo you can observe from Penne are simply incredible: the fields, the hills, the vineyards, small houses and all the way down to the Adriatic sea. 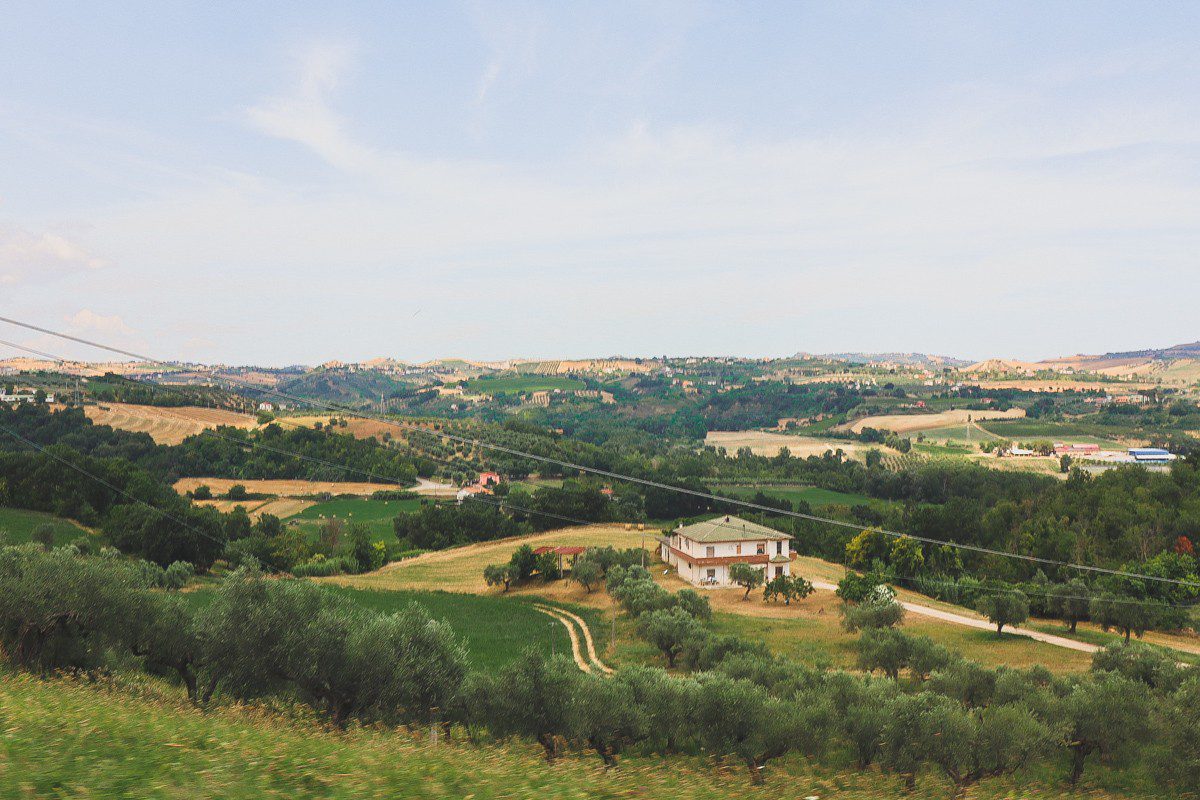 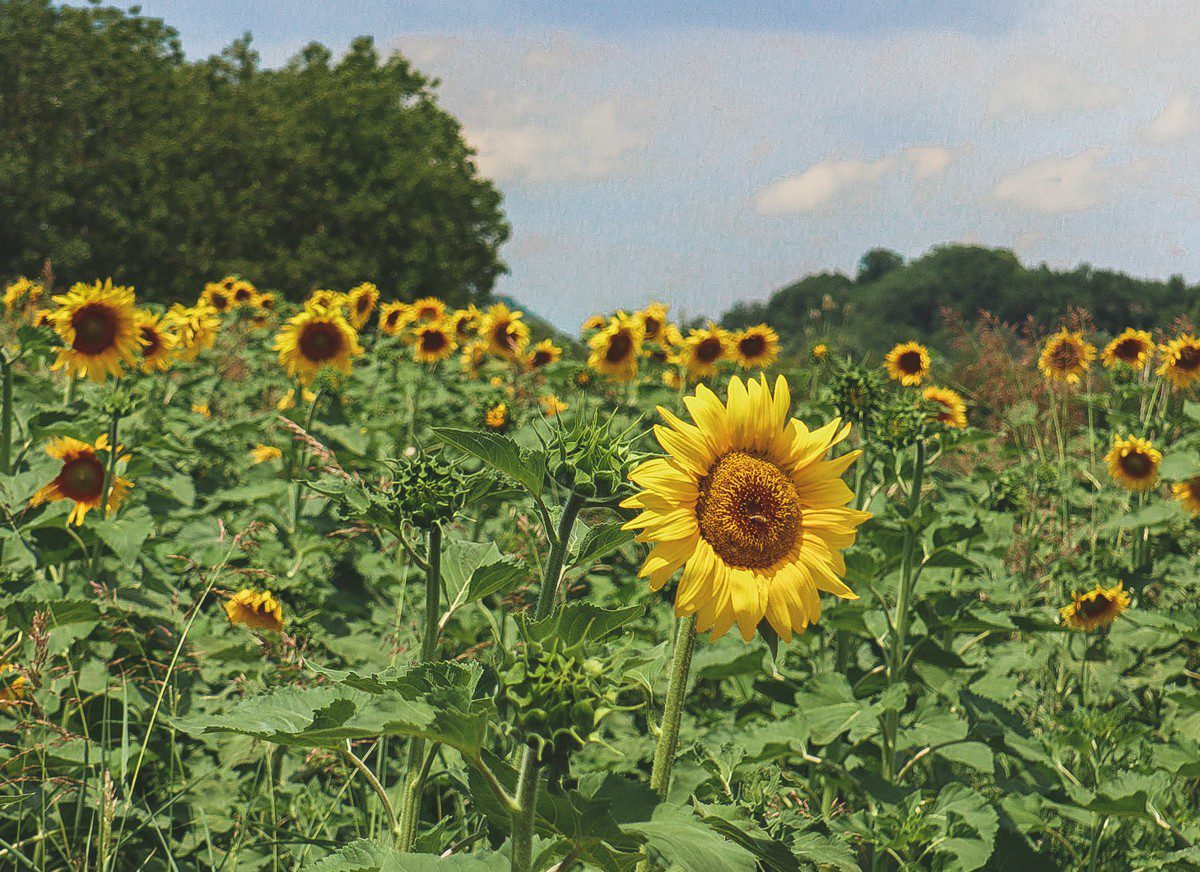 Have a coffee with a view at Cafe Belvedere – this title suits the cafe very well!

Tip: Walk along the passagio around the walls of Penne up (it connects the elevators’ tower with the San Francisco gates). 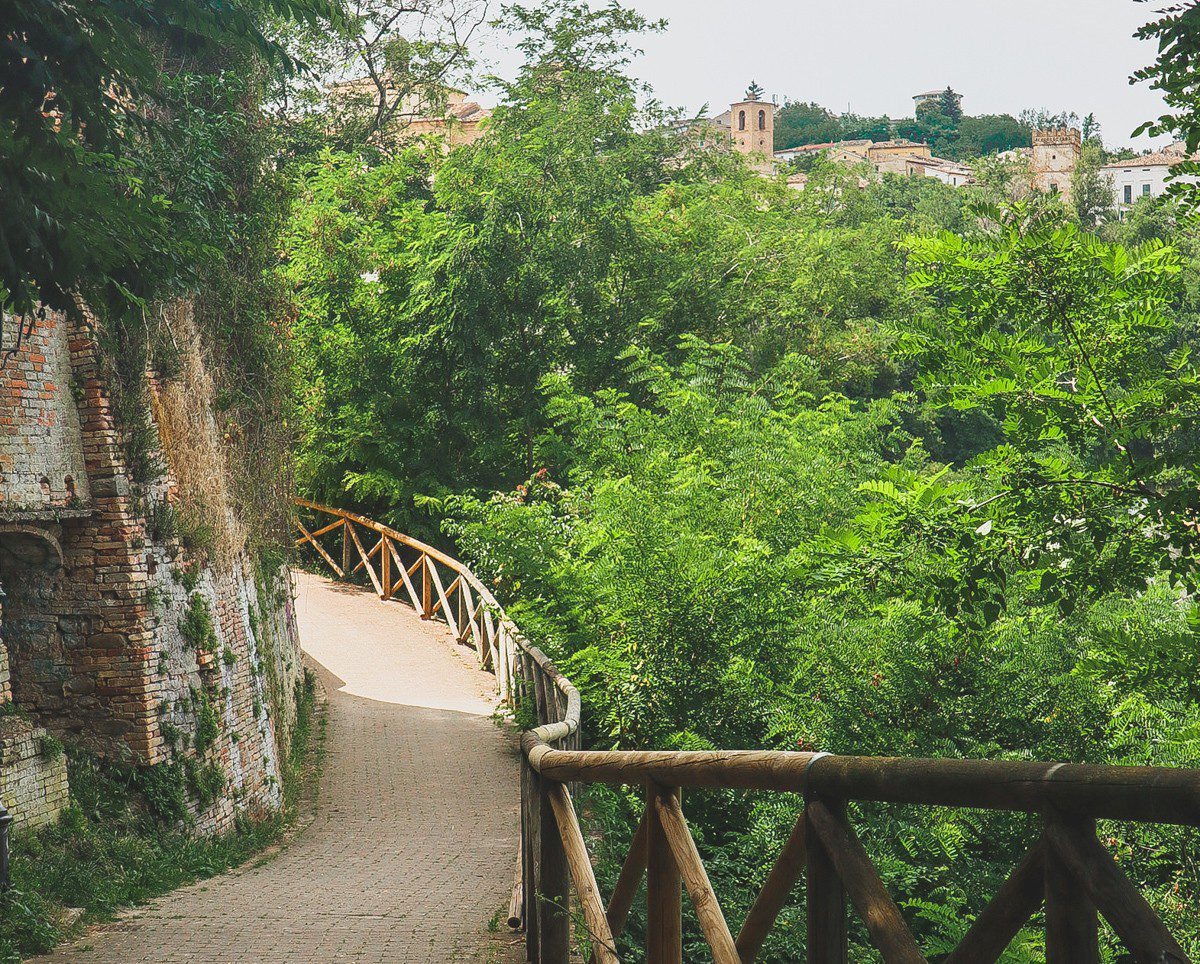 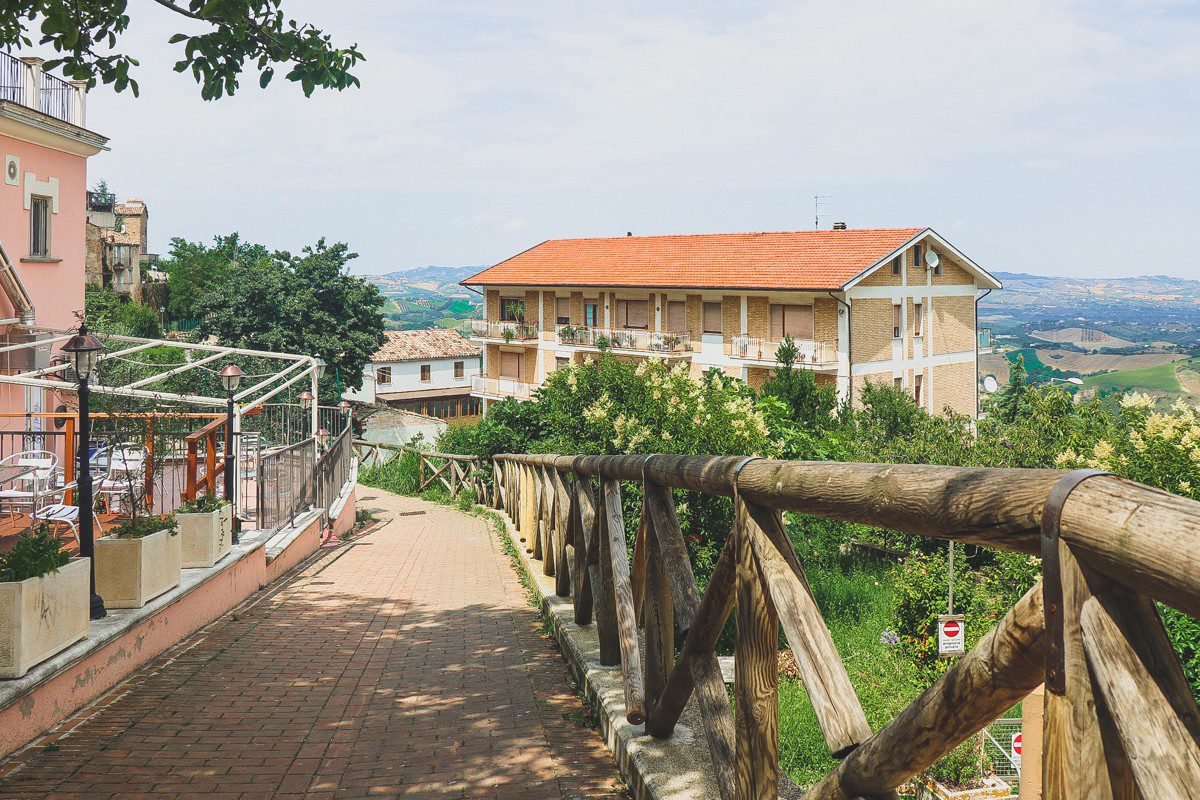 Hope you enjoyed my today’s blog!
Yours,

3 thoughts on “Penne, a tiny gem of Abruzzo”