Galápagos Islands: all you need to know to make your trip epic

Are you planning a trip to the Galápagos Islands, Ecuador? Read my blog about it!

My trip to the Galápagos Islands, Ecuador, was one of the most exciting trips I’ve ever had! So I thought it would be nice to share some facts about this amazing place with you. Check my blog about Quito, the capital of Ecuador, too!

Galápagos Islands are an absolutely unique place which has been largely untouched by humans for the major part of its history. There is some evidence that this place has been visited by inhabitants of the continent in pre-Columbian Era, then, starting from 1535, ships from Europe became a (not very frequent though) guests too – with a ship called the Beagle in 1835 carrying Darwin to the shores of Galapagos and resulted in evolution theory inspired by finches. However, the site remained highly isolated. Since 1978 it’s a UNESCO World Heritage Site.

Galápagos archipelago consist of comptex of almost 20 islands including Santa Cruz, Baltra, Bartolomé, Española, Fernandina, North Seymour, Santa Fe, and Santiago. Puerto Ayora located on the Santa Cruz and named after the Ecuadorian President Isidro Ayora is the largest and most populous city there. 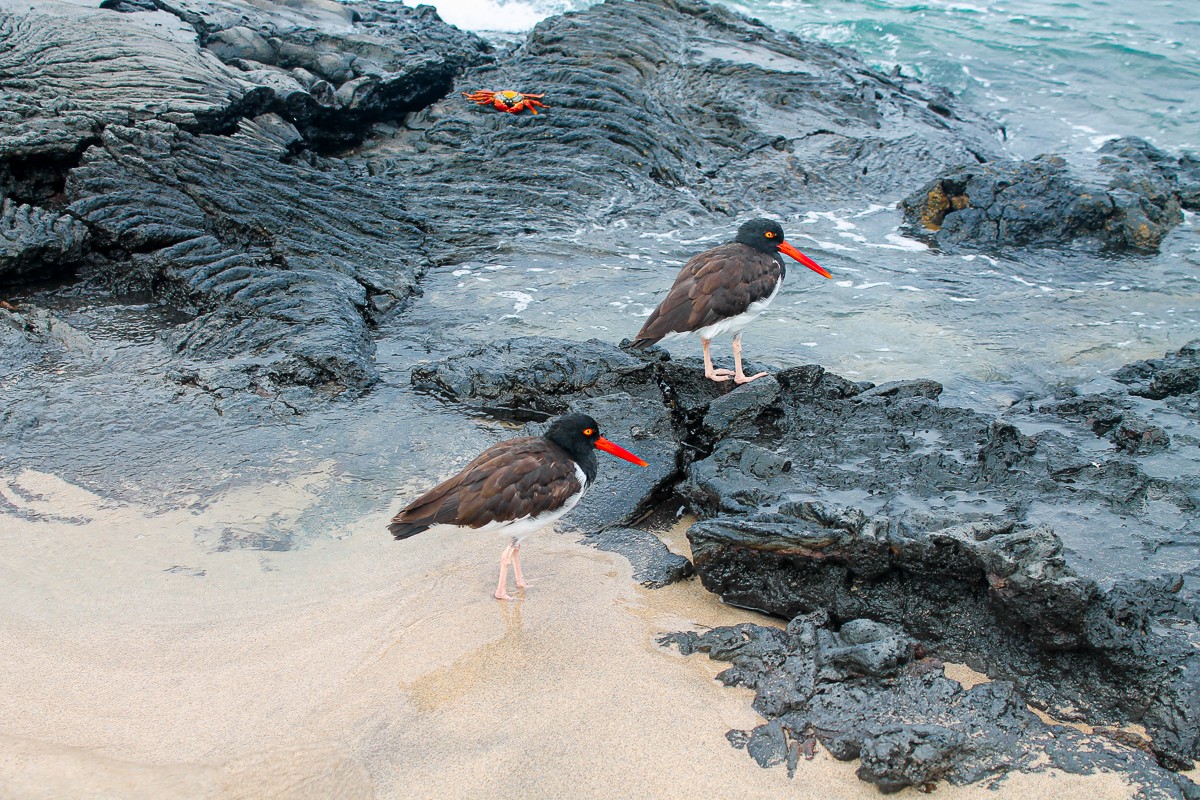 The climate at Galápagos Islands is unusual too because it is influenced by proximity of Equator, cold Humboldt Current and sometimes warm waters brought by El Niño.

And another thing that shaped Galápagos Islands is volcanic and seismic activitie coming from the three tectonic plates meeting underneath. It not only form the archipelago about 3-4 million years ago but also shapes and changes it today as many volcanoes are still active. All the islands are of various ages with Isabela and Fernandina being the youngest.

I promise you will never forget the black-ish wrinkles of lava should you see it once.

There are no direct international flights to the Galápagos Islands, but you can reach one of two local airports – on Baltra and San Cristobal islands – from Quito or Guayaquil. Then you can choose between staying in the hotel on the shore and a naval experience. But I sincerely believe that the best way to explore the archipelago is from water – that’s how we’ve done it.

You spend most of the day on the boat and go on the land with the guide for a tour, for instance, for bird watching or snorkelling around the beach. It offers you not only the best sunsets and sunrises but also have a chance to be woken up at dawn by a member of the crew to see whales – exactly as we were! It’s not properly seen on the photos – but these are a whale mom and a whale baby!

Of course, you cannot mention the Galápagos Islands without talking about its flora and fauna! It all is protected by law.

The list of amazing creatures you can meet there is too long: sea lions, whales, sharks, lava lizards, frigatebirds, marine and terrestrial iguanas, frigates, swallow-tailed gulls, different species of boobies, Galápagos tortoises and turtles, Darwin’s finches, flamingos, and even Galápagos penguins! See lots – I mean LOTS! – of photos of them!


Moreover, even plants are very unusual – the landscape sometimes looks like it is from a different planet doesn’t it?

As the Galápagos Islands are a protected area, there are some strict rules you have to obey. Never approach animals too close, don’t smoke, don’t touch the plants, stay on trails and listen to all the instructions from your guide.

1 thought on “Galápagos Islands: all you need to know to make your trip epic”