Discover the best festive food you can have in London, the capital of the UK!

London is notorious for being one of the best decorated cities for all the festive occasions – and surely Christmas is not an exception. 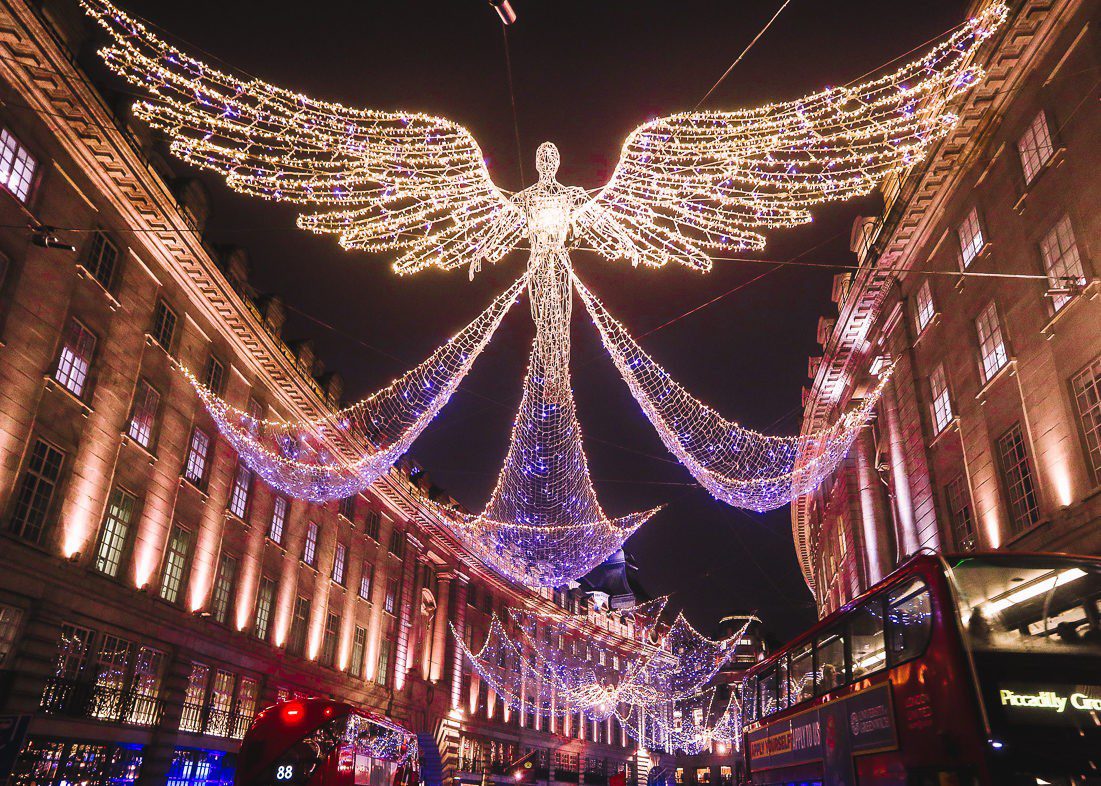 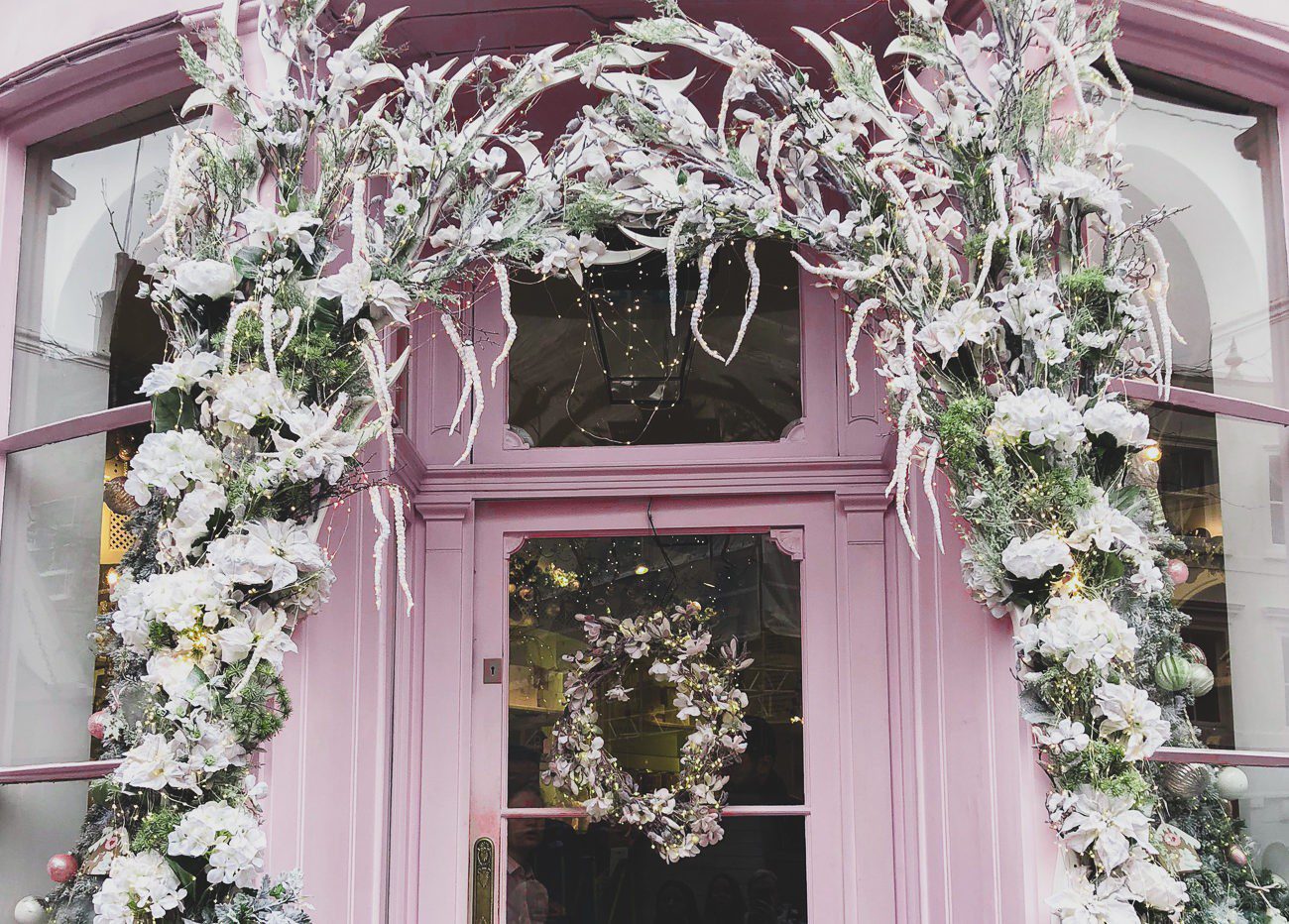 Strolling along the Regent street, drinking mulled wine at the Winter Wonderland or waiting to take a photo in front of Annabell’s or Peggy Porschen are all good options but why not enhance your winter mood by planning a limited edition afternoon tea or curling up in an igloo while it’s windy and cold outside?

Check the list of locations below I was lucky to visit this season, and maybe you would decide to give one a try while you can!

There is no way you’ve never heard of the Dorchester, one of the most iconic London hotels opened in 1931 and overlooking the Hyde Park. This season its display turned into some carousel horses in cartoon-ish style and so did its afternoon at The Promenade restaurant! 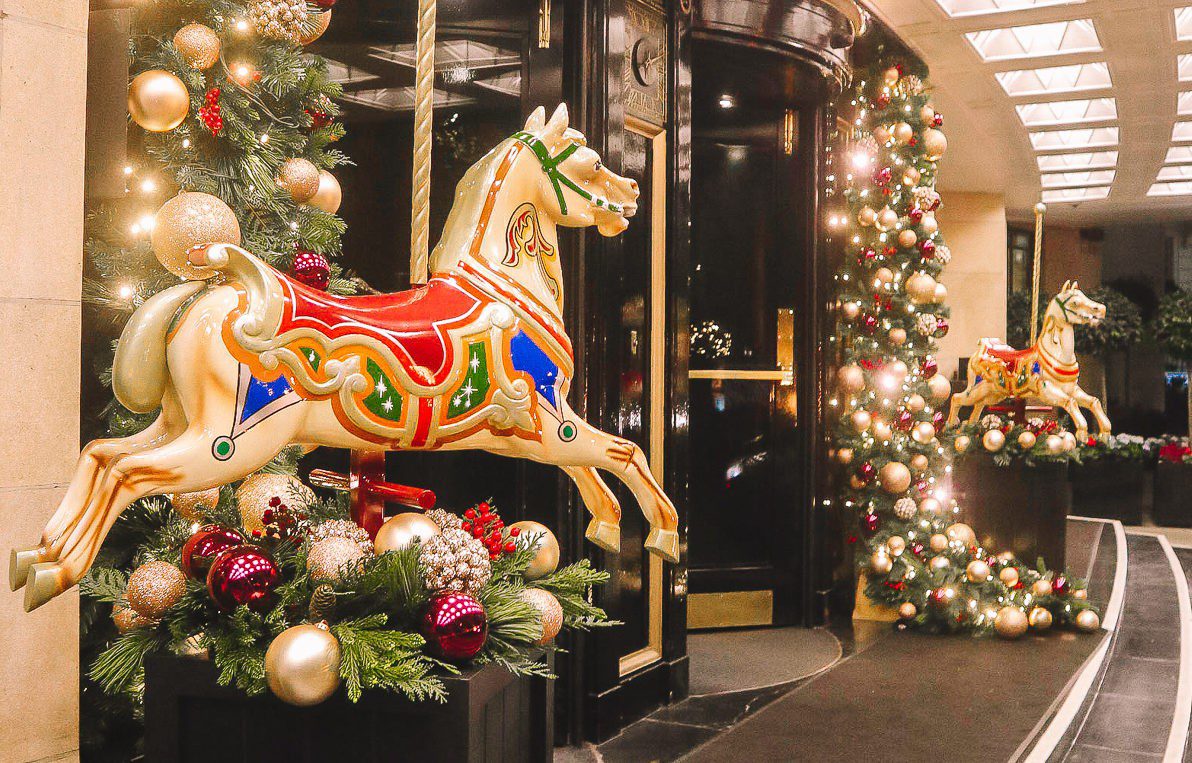 The general idea is classic: a tea chosen from a wide selection of teas, bottomless sandwiches, scones and dessert all served on the fabulous tableware. But for Christmas, it just becomes better – and I was very glad to have been invited to open my season of festive afternoon teas in the most magnificent way in the Dorchester! 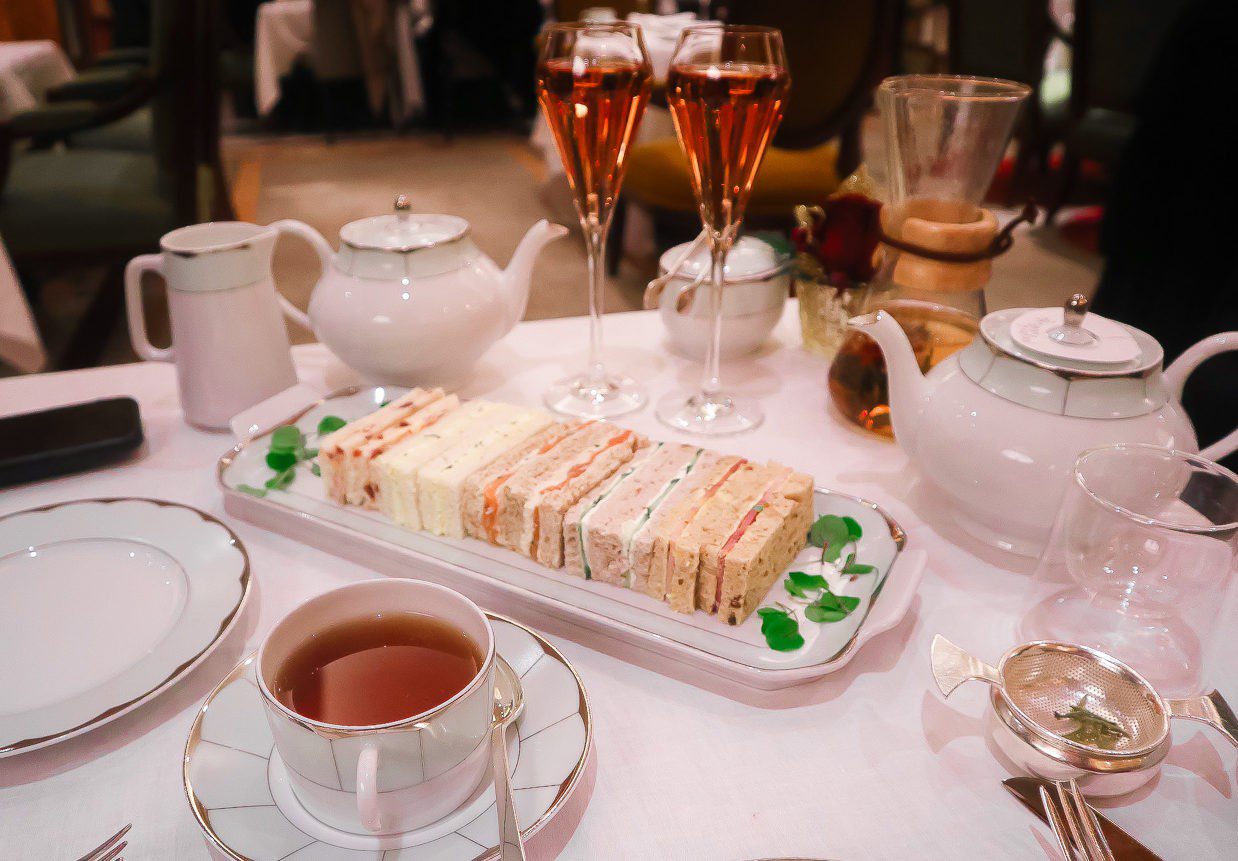 See for yourself how fantastic their festive twist on sandwiches and desserts looks like! Bottomless sandwiches were delish, truffled mayo egg stole my heart and stomach and cranberry scones were really good. Desserts acquired the winter looks thanks to the Sarah Barber, the pastry chef who invented these designs!

Santa’s hat and Christmas bauble are fabulous aren’t they? 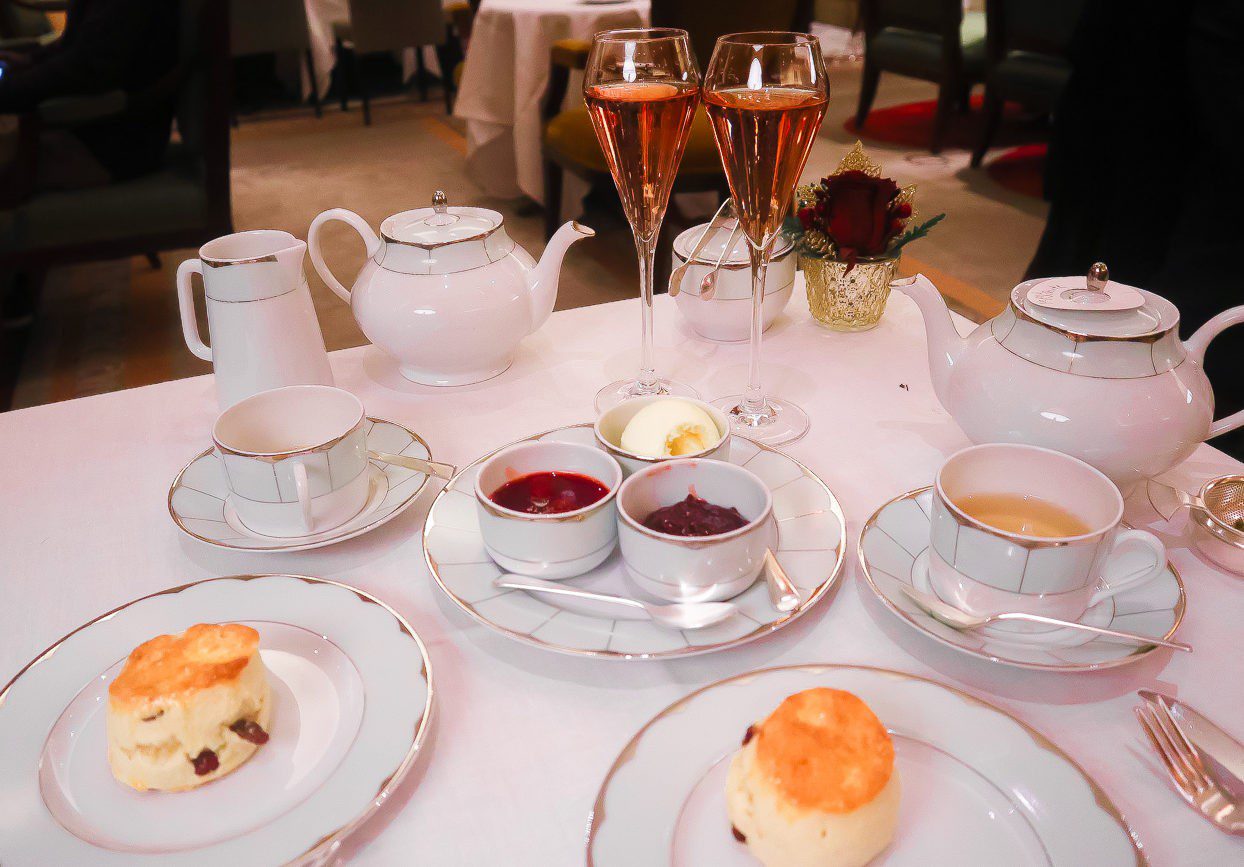 The best company for such feast is some quality rosé – and so we went for Laurent-Perrier.

The Langham Hotel Afternoon tea in collaboration with the Liberty London 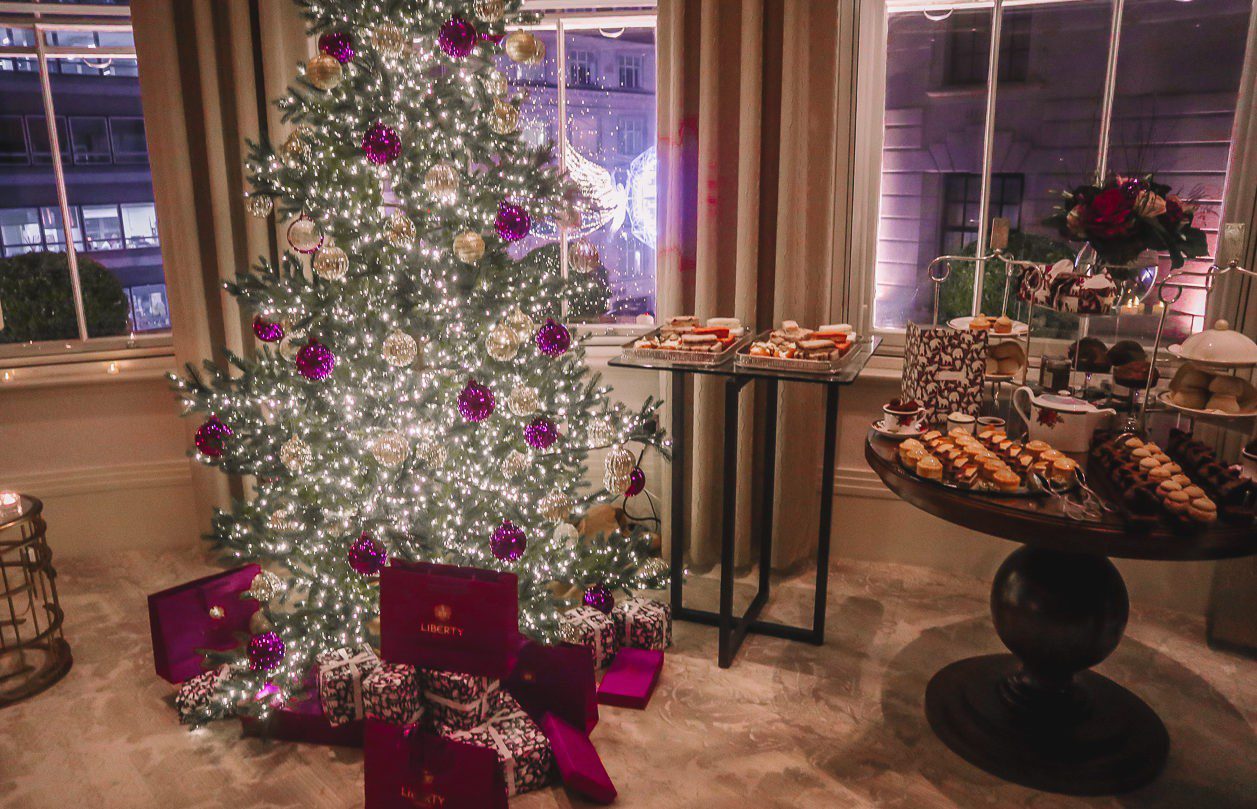 The bloggers’ event dedicated to this launch was held in the Infinity suite with this amazing Christmas tree which definitely looked like a tree you usually see in a high street ad! And this certainly is a perfect place to watch the Christmas lights isn’t its?

Interesting: the Langham Hotel was the first place to serve afternoon teas commercially to the public, and in 2011 it was limitedly served for the 7 pence only, the original price back to the 1865! 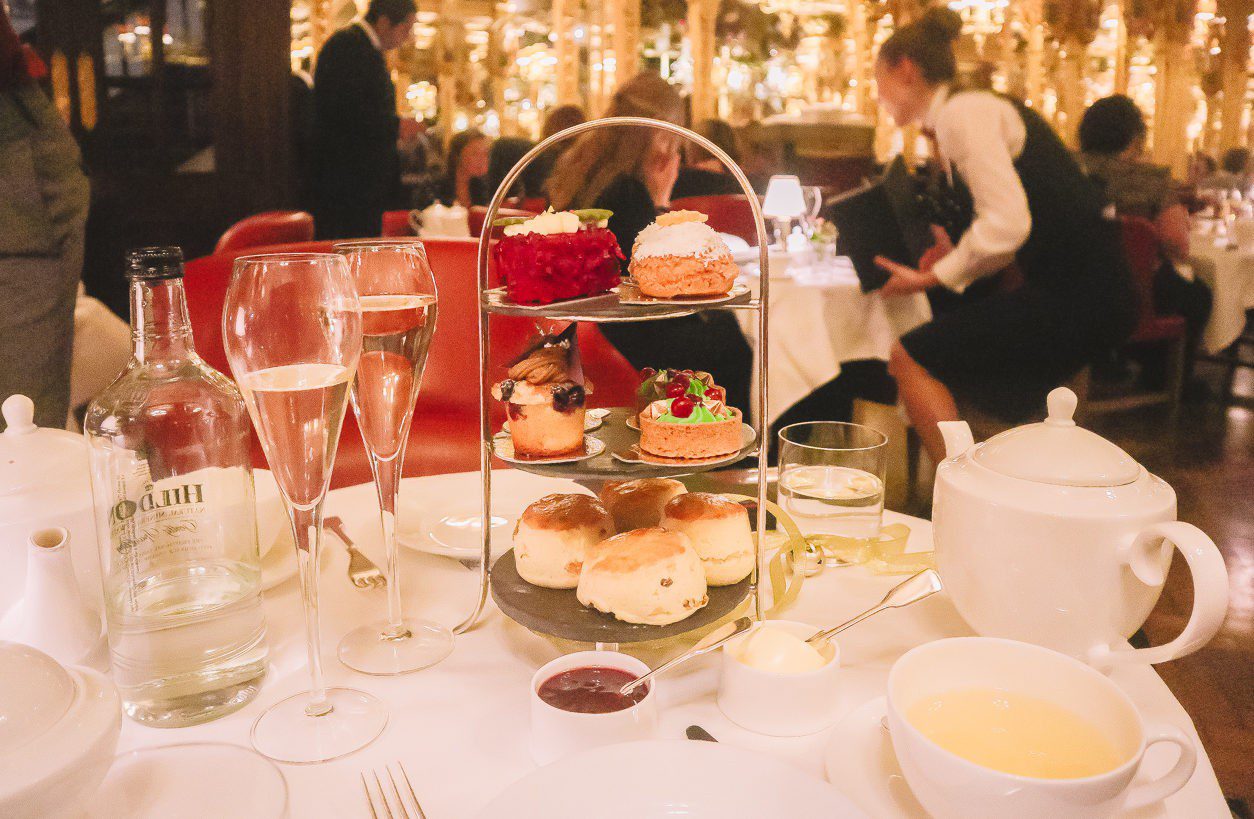 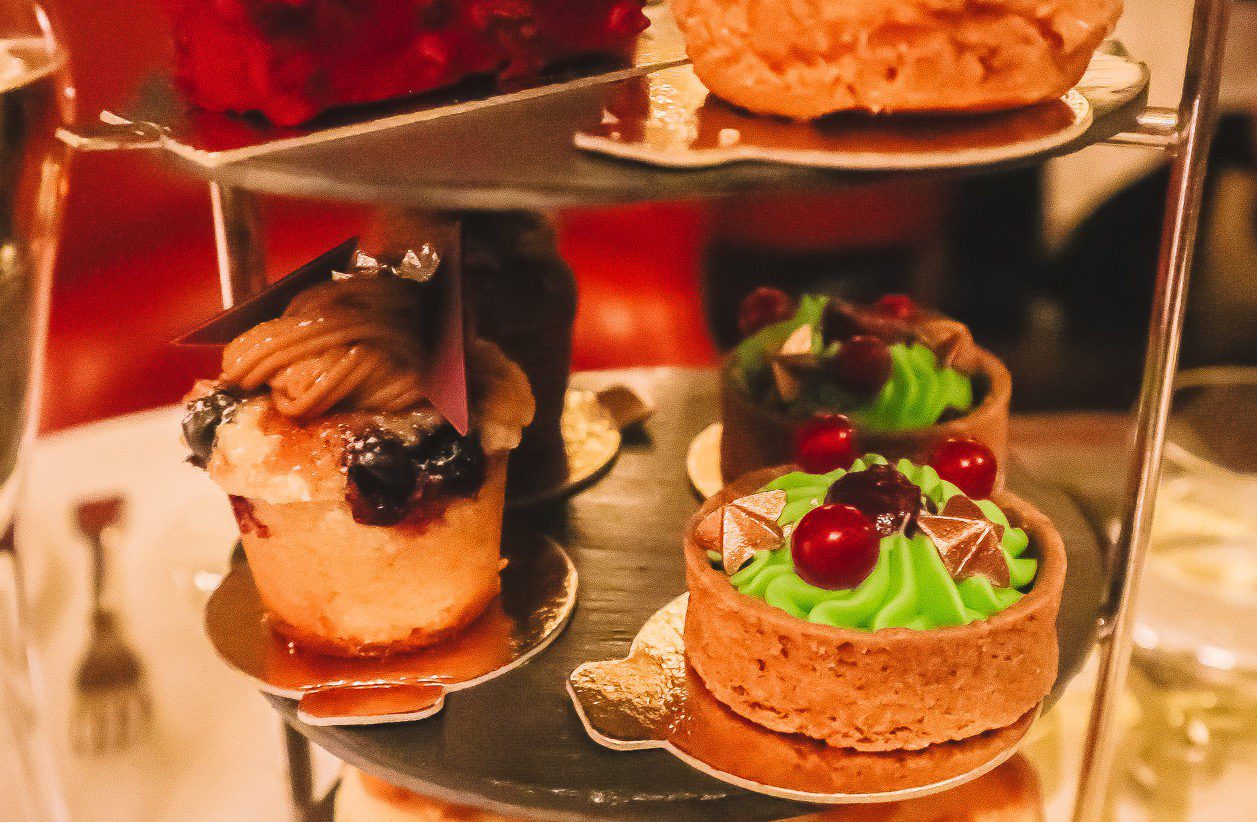 Another historical locations that turns festive is the Hotel Café Royal. You might think that after winning the Best Traditional Afternoon Tea in the UK at the Afternoon Tea Awards 2017/18 they could’ve just relax. But no, they put the most wonderful Diptique Christmas tree at their entrance and serve the Diptique afternoon tea with some cute arrangements.

Of course, it’s still served at the Oscar Wilde lounge loved by so many talented people and is accompanied by a live music! We were lucky to spend the most wonderful time in there with my fellow Instagrammers 🙂

Interesting: if you were wondering where these famous shots of Christmas lights on the Regents street from the above are coming from – they are taken from the Hotel Café Royal.

All you need for Christmas are Cakes and Bubbles

Just next door at the Regent street the Albert Adrià’s Bubbles and Cakes café is located, and it fully reflects its title! It’s a really guilty pleasure to sit with a glass of champagne (alcoholic or non-alcoholic – it’s up to you) and to watch the Christmas Angels from a warm and cozy chair. 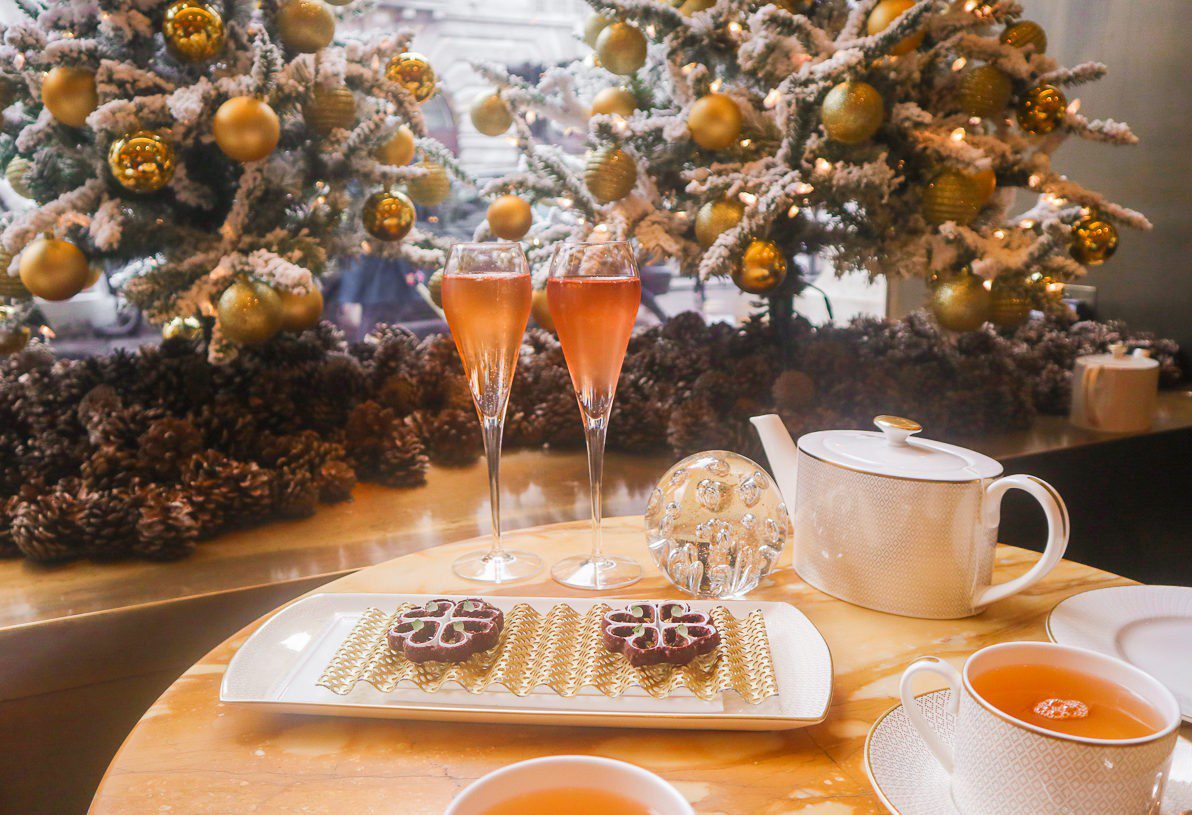 Christmas decorations in there are chic, don’t you agree? 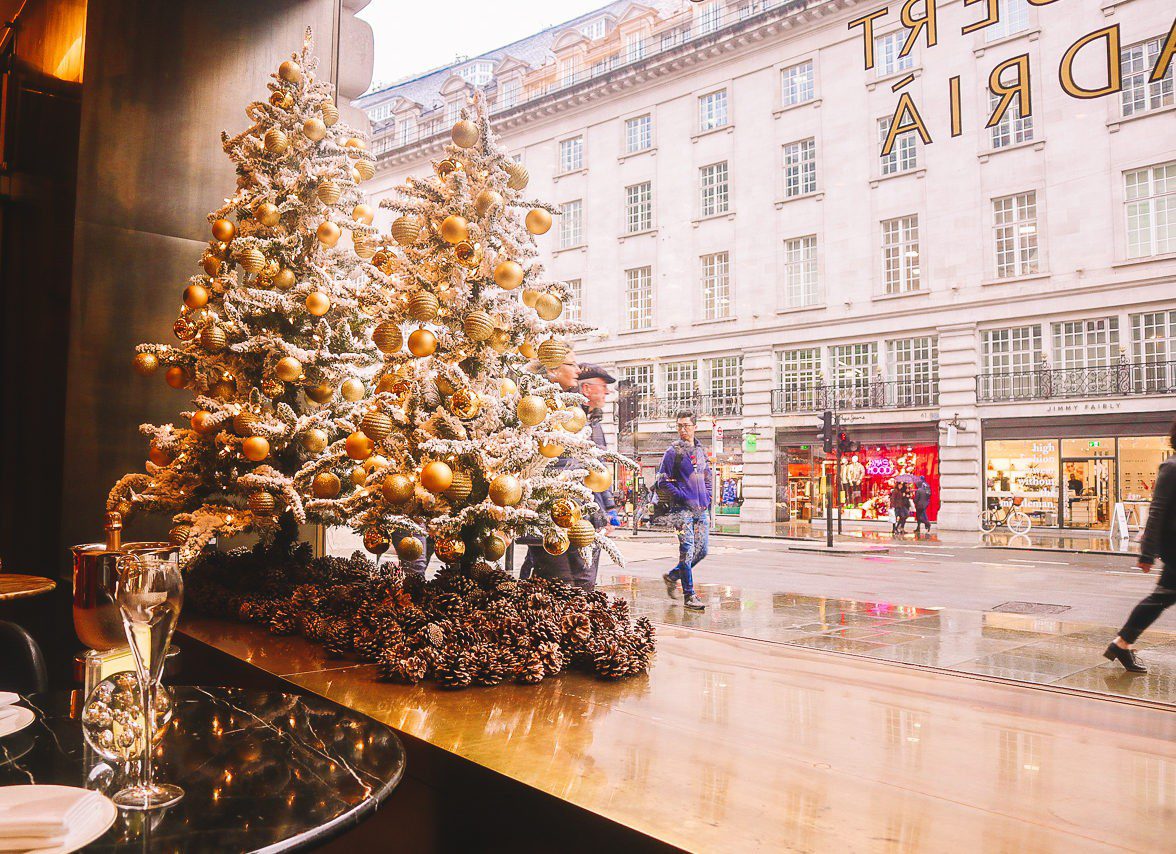 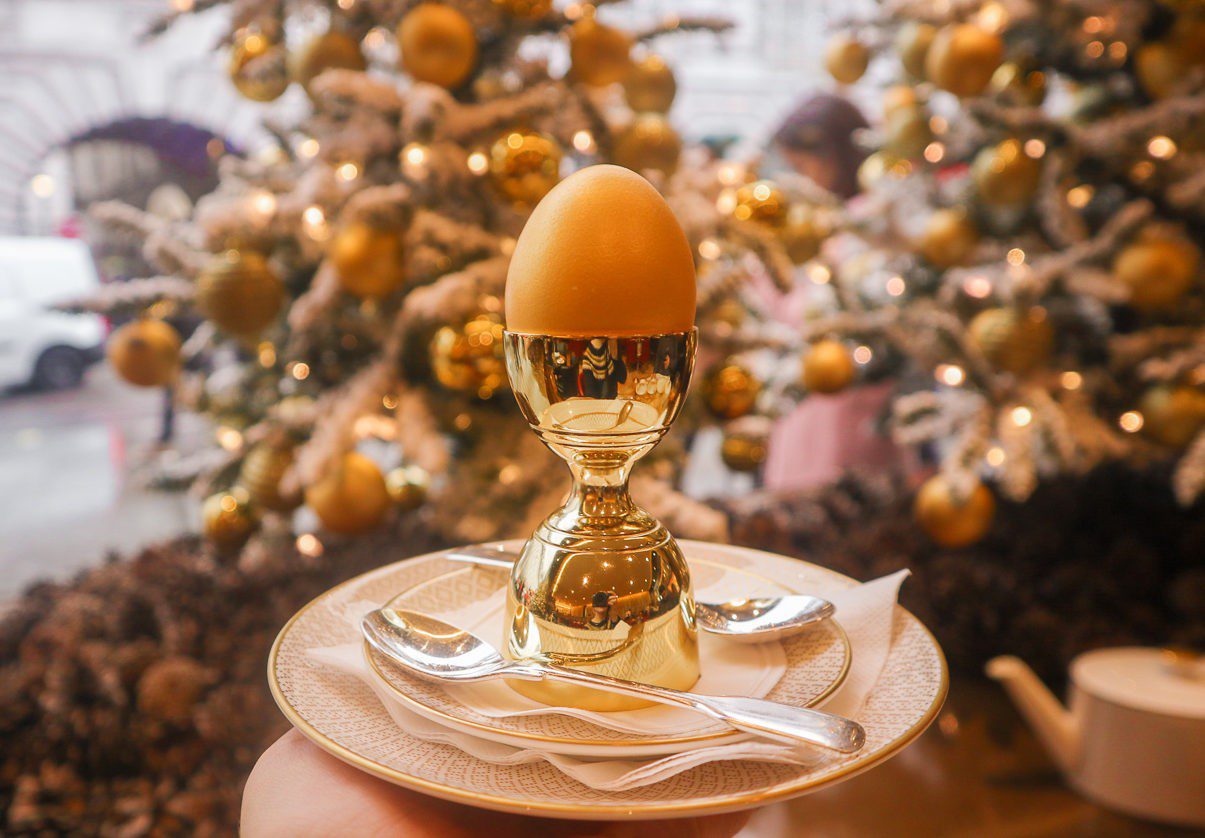 I bet you have never seen such a creative serving of desserts as Cakes and Bubbles does: frozen chocolate and coconut flower on a golden lace, edible ‘corks’ on top of half bottled champagne or an Egg Flan inside a real eggshell covered with gold.

Cheesecakes prepared either in a classic form or with a hazelnut twist are worth a go as well! 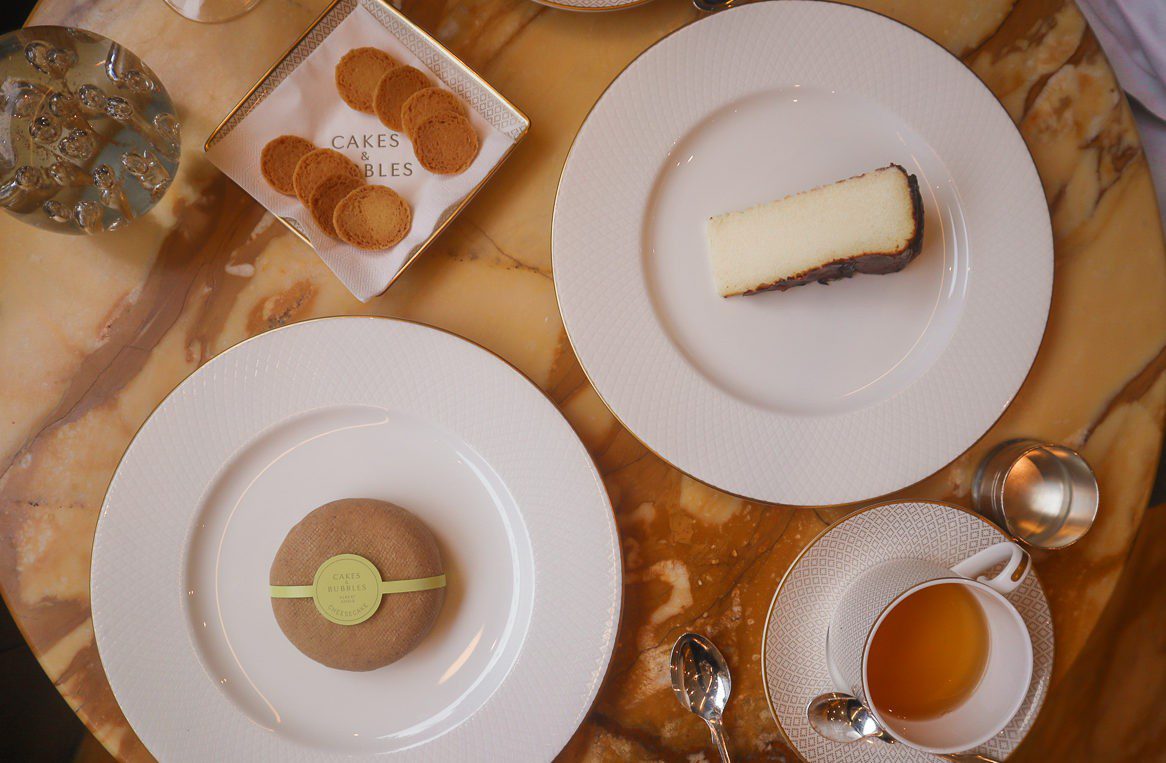 A real festive break isn’t it?

Tea with the Royals (almost)

I always visit Royal Garden Hotel for two things. First are the views over Kensington Park – who knows maybe Duchess of Cambridge would be walking around. And the second is a Peking Duck in one of the restaurants – because it’s amazing! This season we’ve also tried their festive afternoon – and I wasn’t disappointed at all. 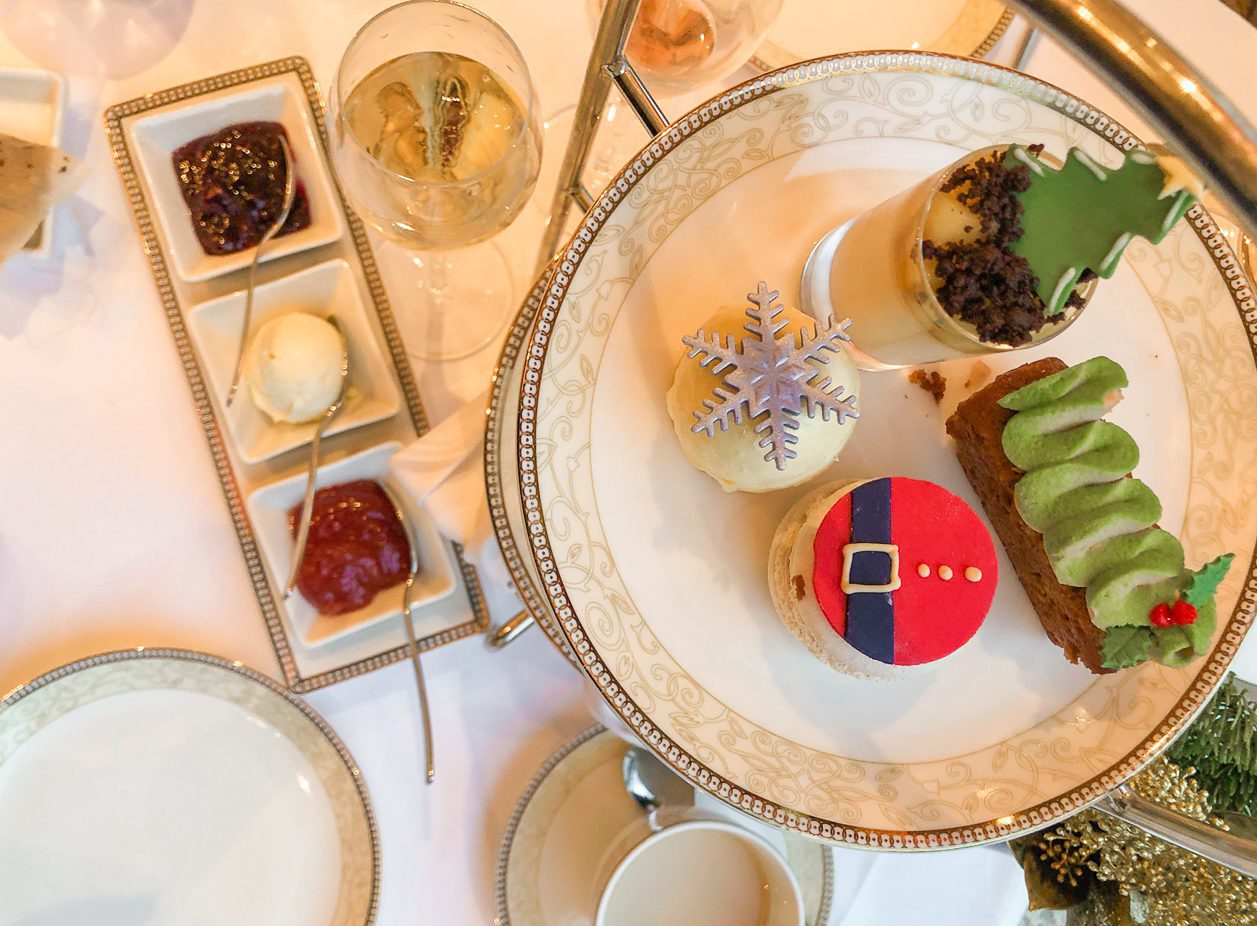 First of all, you choose your tea from a tea tray selection – it’s a really good idea because it’s always nicer to smell and choose the tea you liked than to pick it randomly from a printed piece of paper. They also put the selected tea into the teabag themselves. 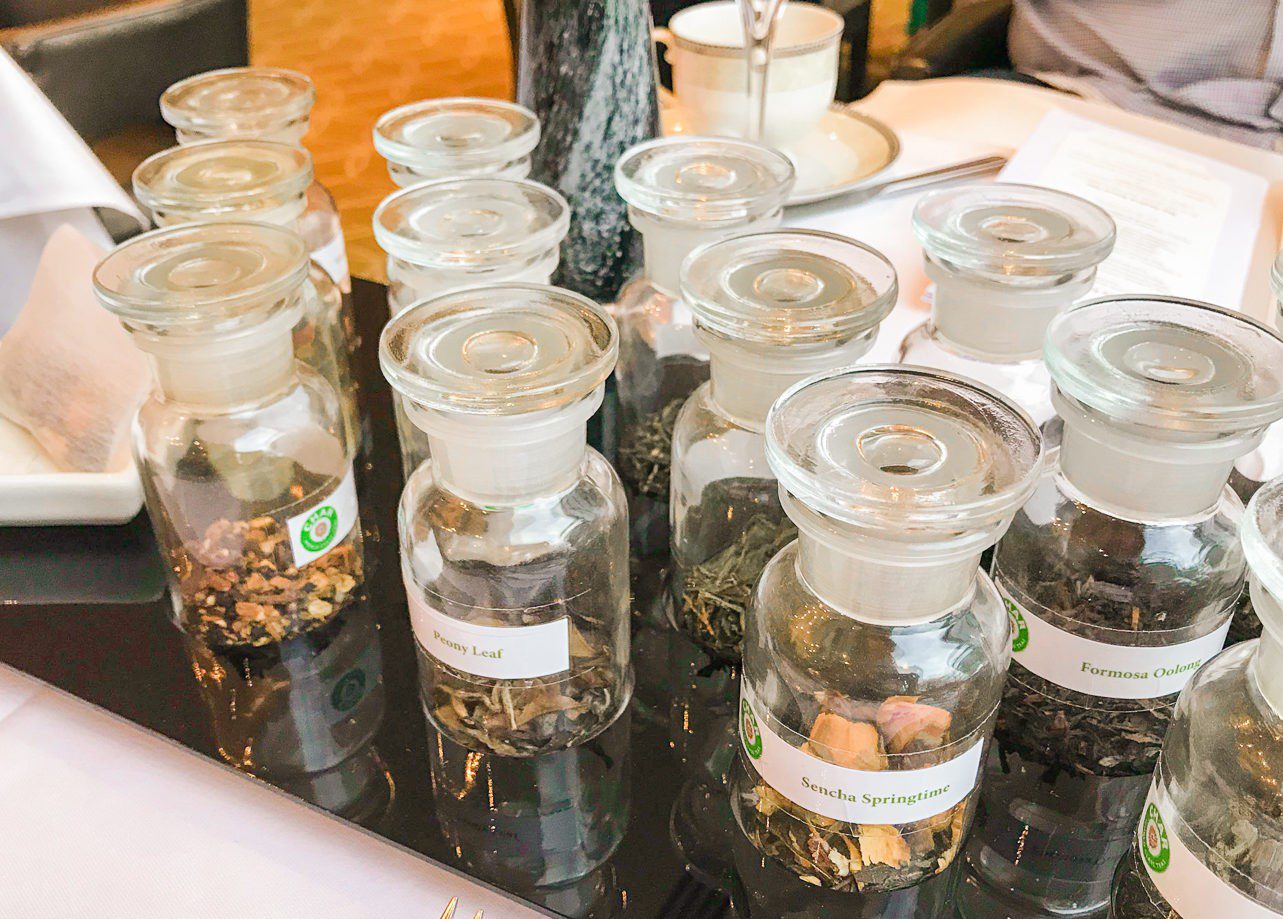 Next comes a plate of sandwiches of a pretty peculiar shape and the stand of scones, cakes and other desserts. Although they were really mouthwatering, I was a bit puzzled why all the desserts on the top plate were just one piece a type (usually, when you order a tea for two you get two pieces of each dessert) and why there were six different desserts promoted on all the official shots pictures and we got only four…

Nevertheless, they all were extremely tasty and nice looking!

If you prefer to try something absolutely innovative but still in line with traditional British ‘cup of tea’ pop into the Nobu Shoreditch hotel for an afternoon tea with a Japanese twist! The hotel itself  represents Japanese themes incorporated into the Westernised environment.

As for the afternoon tea, it looks really pretty doesn’t it? Tofu bun with a truffle cream and Maraschino cherry & chocolate Christmas tree were really amazing. And I was really glad to be invited there because I cherish every possibility to try my favorite Japanese ingredient – the citrus called yuzu – which was part of one of the desserts. 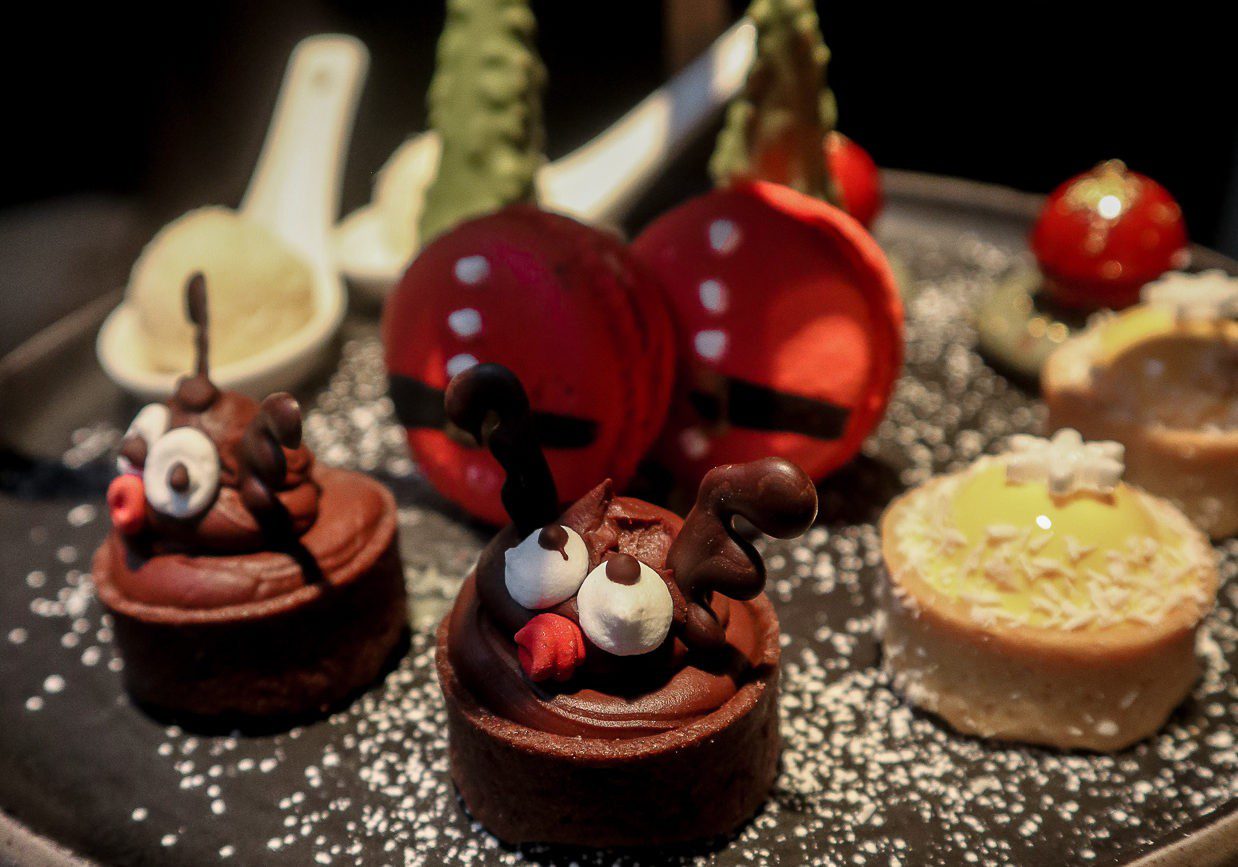 No scones unfortunately are included into this afternoon tea but we were pretty full even without them.

If you’re frequent to Instagram you’ve probably seen these unusual scenery (for London) shots when the Thames embankment fills up with the igloos? Well, it’s a really unique experience so why not to pop into Coppa Club Winter igloo with a bunch of your friends! 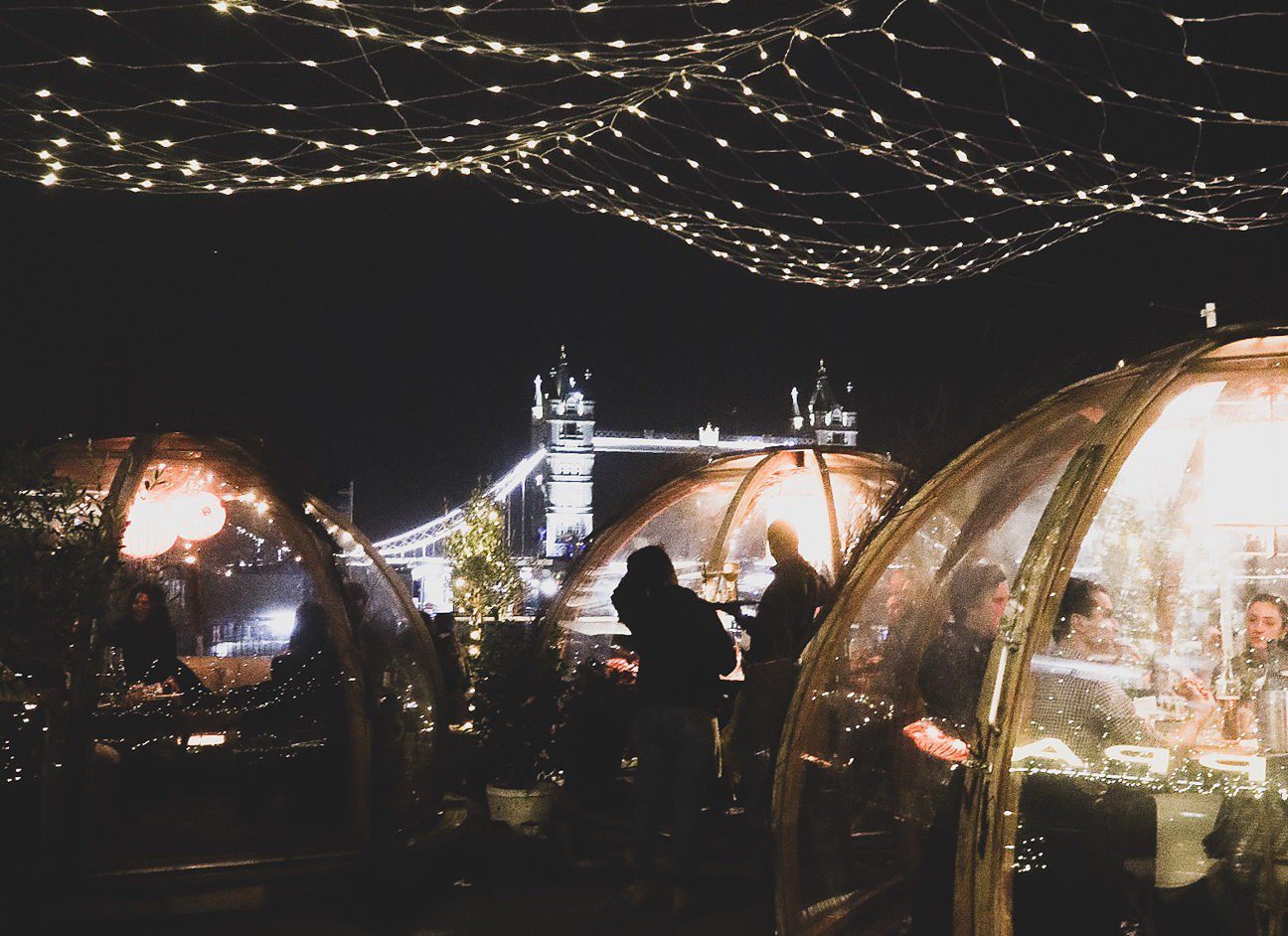