The capital of Taiwan is a buzzing and charming city I’d suggest everyone to visit!

Taipei, the capital of Taiwan, or the Republic of China (sadly, not recognized as an independent state by all countries), is a buzzing and charming city I’d suggest everyone to visit. We had a chance to visit it only briefly when we came there for one day from Hong Kong – but it was enough to fall in love with it and to have a glance at the main touristic and historical landmarks!

Just a little historical note not to go too deep into the topic:

When the communist party won over mainland China, the opposing party – Chinese Nationalist Party called the Kuomintang – relocated to Taiwan under the leadership of general Chiang Kai-shek. He became a practical ruler of Taiwan till his death in 1975. The majority of historical Chinese artefacts survived only because they were relocated to Taiwan too, as during the Chinese cultural revolution they would’ve been destroyed. Now many of them are displayed at the National Palace Museum which to be honest impressed me more than any museum in mainland China (see its exhibits at the end of the blog).

Chiang Kai-shek Memorial Hall is one of the most well known landmarks of Taipei completed in 1980. Dedicated to the first president, dictator, national hero and leader, it’s a huge architectural gem – and, I must say, it impressed me more than the Lincoln memorial in Washington DC!

The first floor serves as an exhibition area where you can learn about Chiang Kai-shek’s life as well as see temporary exhibitions and have a snack and take the lift to access the main chamber with the giant sitting statue of Chiang Kai-shek.

The gates of the memorial are gorgeous too!

Chiang Kai-shek Memorial Hall stands on the Liberty Square, 240,000 square meter space where the National Theater and National Concert Hall are located as well. During our visit the festival took place there too.

National Revolutionary Martyrs’ Shrine built in 1969 on the slopes of the Chingshin Mountain  is dedicated to 400,000 martyrs who died for the Republic of China at the wars of the XX century (the depictions of the battles are there too). 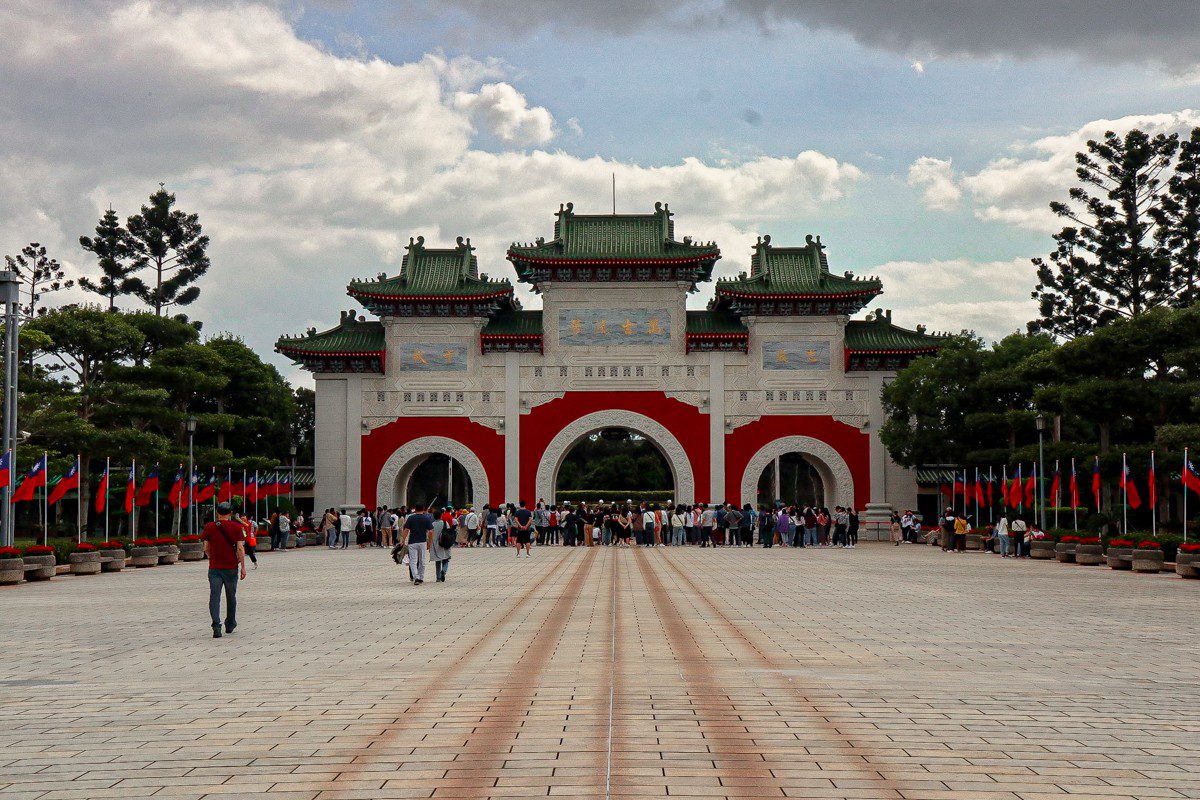 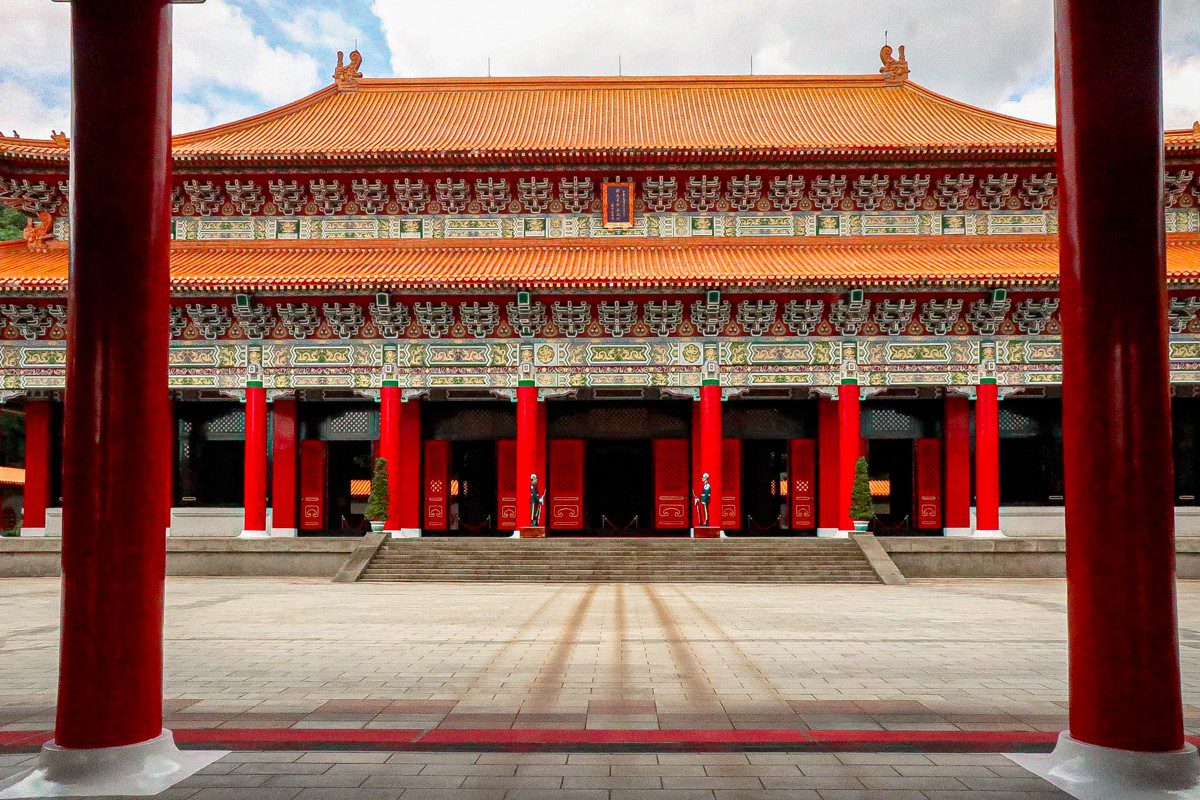 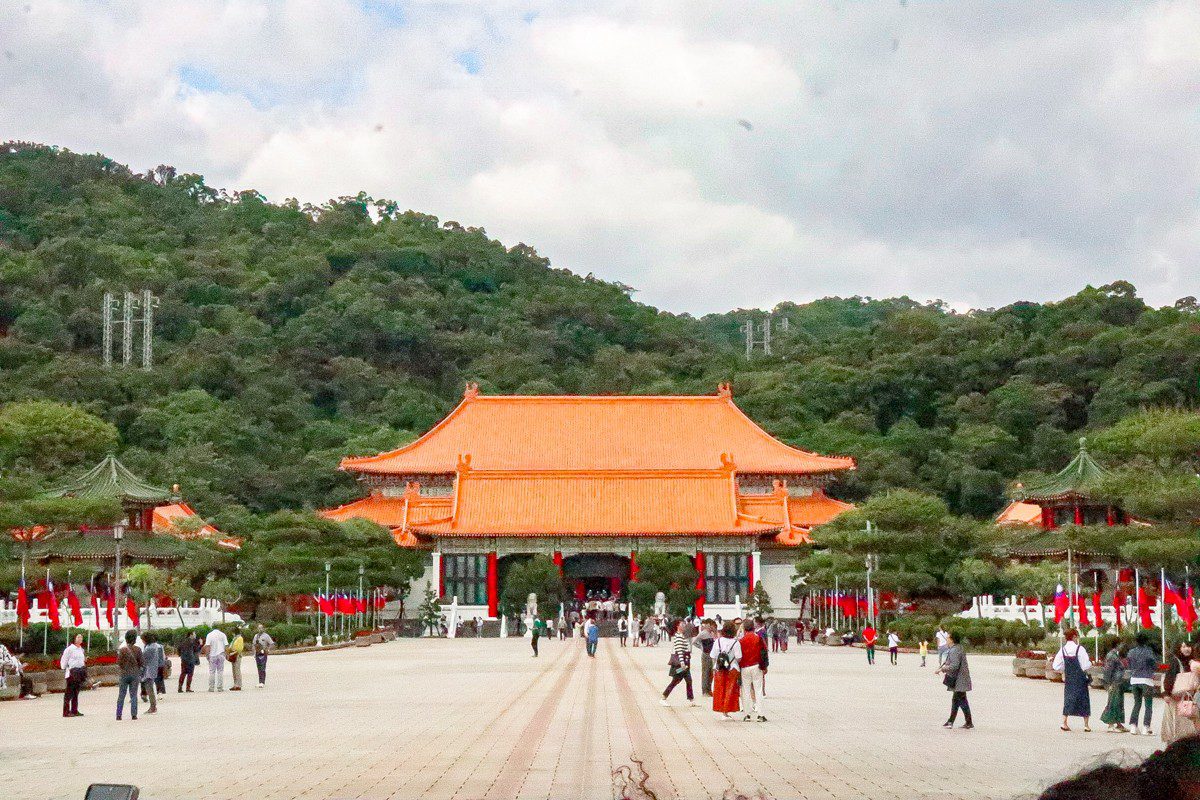 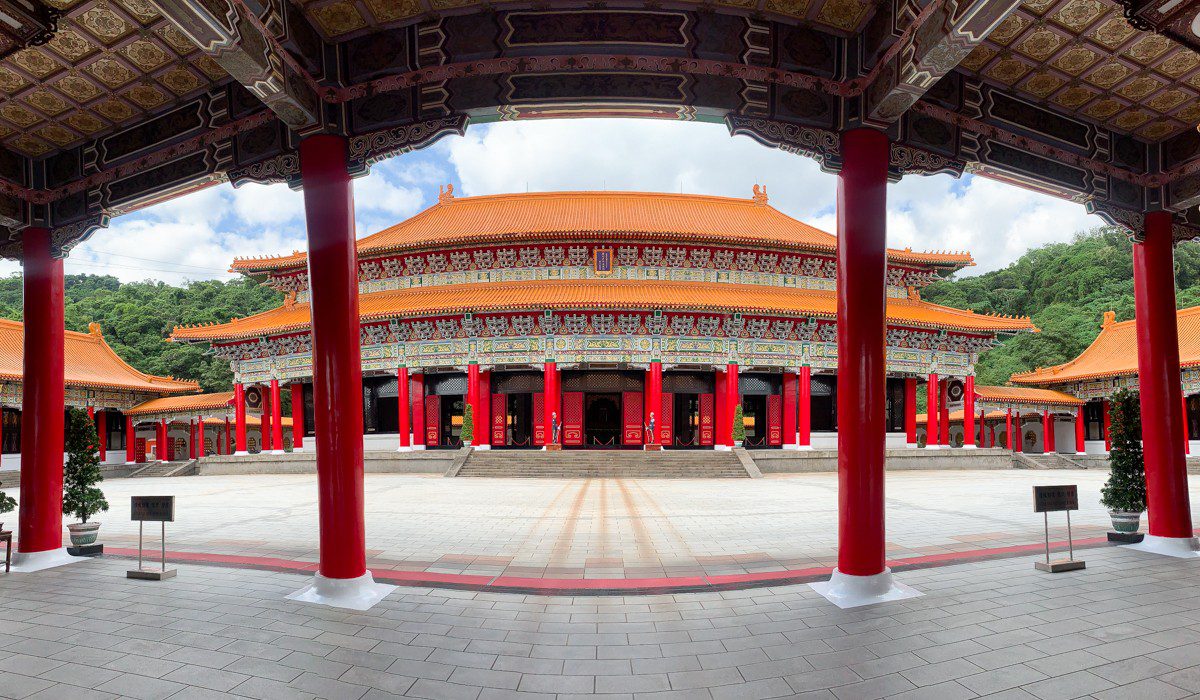 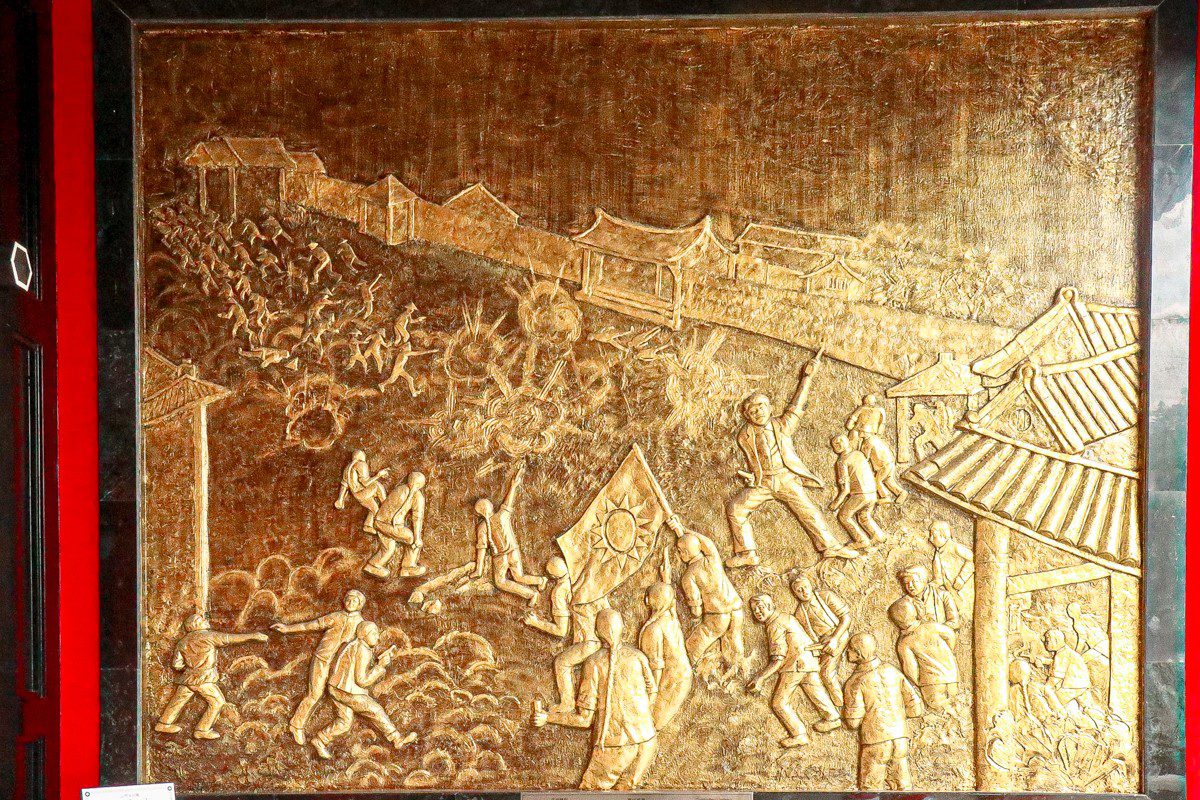 We were lucky to catch the change of the guards in front of the main three-arched gate – it takes place every hour and it’s a real must-see!

If you’re looking for observational points in new cities just like we do, don’t hesitate to visit Taipei 101 Tower, once the tallest building in the world (before Burj Khalifa was built – check my blog about Dubai too!). This skyscraper was opened on 31 December 2004, its height is 509m and it is often referred as ‘a stalk of bamboo’. You can get to the observational desks of the 88th and 89th floors by the elevator from the 5th floor of the Taipei 101 Shopping Mall. The 91th floor is open too if the weather permits, and it’s an open observational desk.

Tuned mass damper is one of the points that are hard to miss – thanks to this 720-ton yellow ball the Tower stays balanced during earthquakes and typhoon winds! The science behind it is revealed in educational videos provided for the visitors.

On your way to the exit you’ll go through shops and restaurants, and this is  exactly where we decided to spend our last hour before heading to the airport.

We didn’t want to spend hours in the queue, so we opted for the VIP entrance which was super quick and convenient.

Ximending  in the heart of Wanhua District totally felt like returning to Tokyo. This pedestrianized district offers you a colorful range of buildings, shops of all kinds, bars and, of course, the tastiest street food! It’s also referred to as Taipei’s largest LGBT district.


On the historical note, the famous Red House, once a theatre and the market now, is also located in this area.

No doubts, Longshan Temple built in 1738 is the most well-known temple of Taipei. Actually I’m planning to write a blog about Taipei temples, so I’ll just post these photos there to keep the intrigue alive 🙂

Lin An Tai Historical House is a real villa of the Lin family, a prosperous and successful traders back in time who moved to Taipey from Fujian County in China. It dates back to the 18th century and now is one of the oldest buildings in Taipei.

Lin An Tai Historical House’s architecture corresponds to the fengshui basic principles for bringing prosperity. You can explore not only the traditional Chinese house but also the pond and the magnificent garden.

Looking for something historical and entertaining at the same time? Head to the Bo-pi-liao, a restored Qing dynasty street showing you the trading history of the district in bricks and wood. Bo-pi-liao street has lost its importance during the Japanese tule but now is restored to its former glory. It is filled with many shops and walk-in locations from different time periods to explore. I was particularly impressed by the Tsay Jaang-Jung’s Hand Puppet shop and the tea house!

The Heritage and Culture Center of Taipei City is also located there.

When talking about the beautiful buildings of Taitei, the Presidential Palace is worth mentioning indeed. It was built during the Japanese rule of Taiwan. Sadly, we didn’t have a closer look but I suppose the best of it would be from Ketagalan Boulevard.

As I’ve already mentioned, the National Palace Museum (Northern Branch) is a must if you’re into the history of Chinese civilization and maybe even into human history in general because the collection of this museum covers over 8 thousand years! Many artefacts were saved from the Forbidden city in Beijing.

It includes prehistoric objects and ancient metal work, calligraphy and scrolls, use of jade, porcelain and ceramics, historical documents, objects of imperial Ming and Qing dynasties everyday life and so many more – the whole collection includes over 700000 objects (but only part of them are on display). Its most cherished treasures include Jadeite cabbage and meat-shaped stone (aka braised pork belly) but I sincerely suggest you to visit every single room of this museum. Spam of the photos below:

2 thoughts on “Best landmarks of Taipei”