Unleash the magic of a British Christmas

Have you ever considered Surrey and Kent as an escape for the Christmas holidays?

Usually we headed somewhere out of the UK for Christmas time to escape the crowds of London that grow immensely during the winter holidays. But this year (of course, by the time I’ll publish my blog it’ll be correct already to call it ‘last year’ but I need some time to get used to that 🙂 ) we’ve decided to plan a trip to British countryside instead. Quite unsurprisingly, the traffic wasn’t at its best but in about 1,5h we made it out of town and went straight to Chiddingstone.

Chiddingstone’s a very iconic Tudor village in Kent, owned by National Trust. Its name comes from a real sandstone that likely served as border stone for saxons who inhabited this area long time ago. 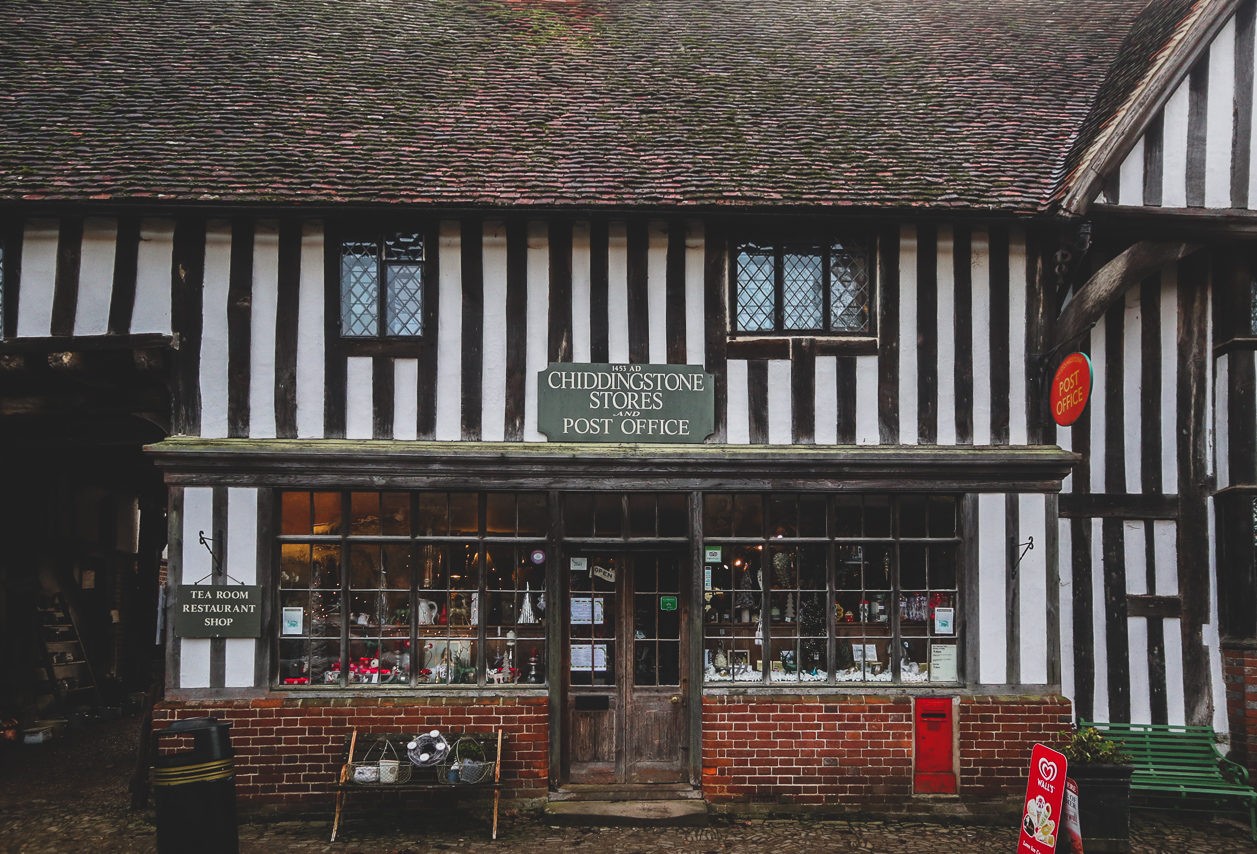 Chiddingstone is tiny: there are just a few houses and literally one street – but look how beautiful it is! One of the most notable buildings is the High Street House closely linked to the Streatfeild family.

Its first stones date back to the 16th century but later on, in 17th it was remodelled. The local church called St Mary Church and has been rebuilt several times during its long history. Remodelling of the house’s grounds in the 19th century resulted in the current diversion of the road through the village. 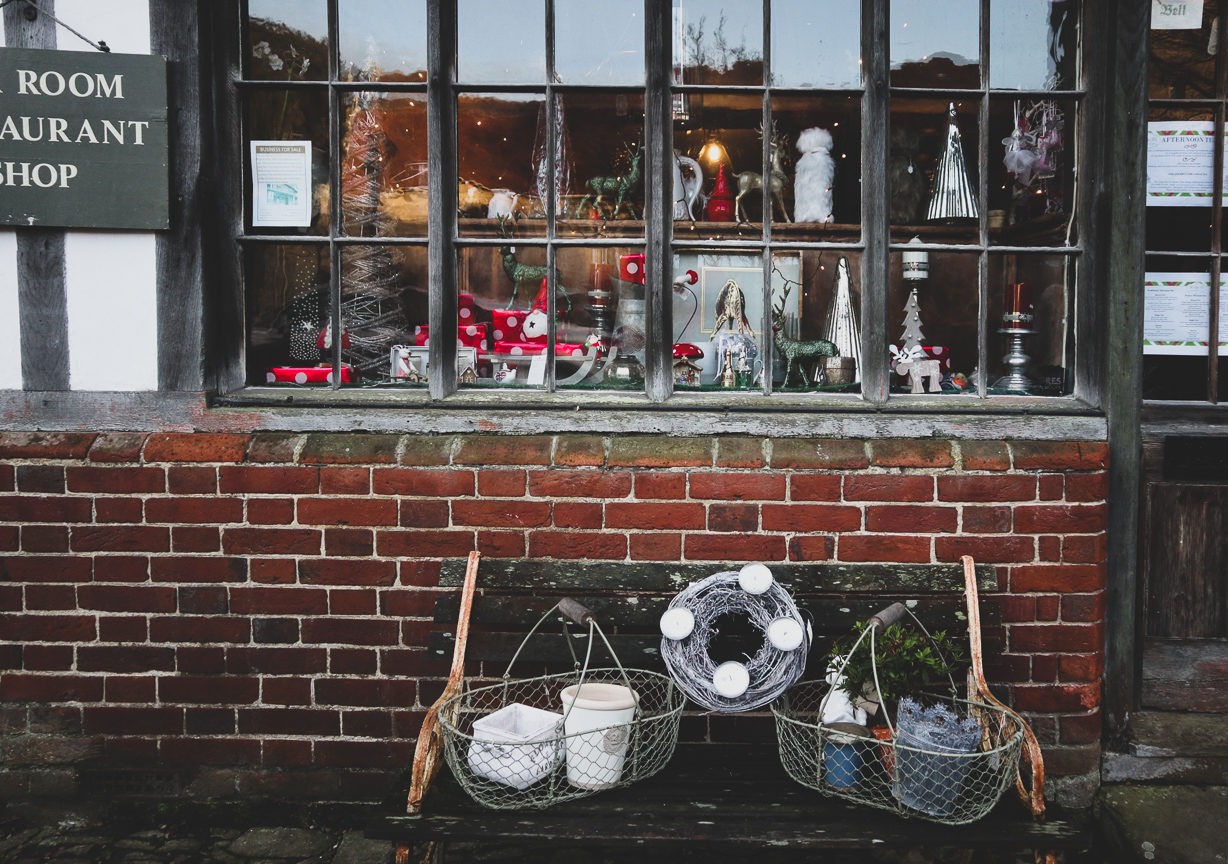 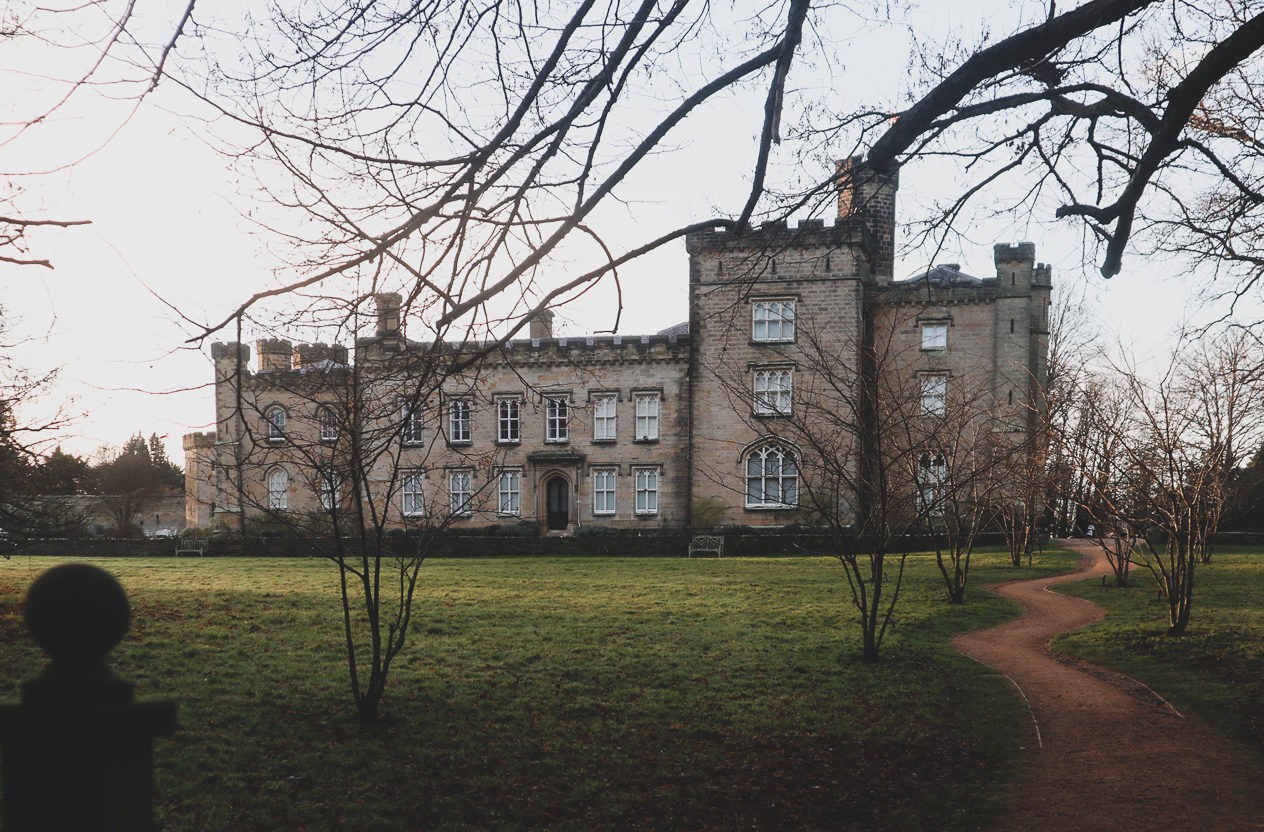 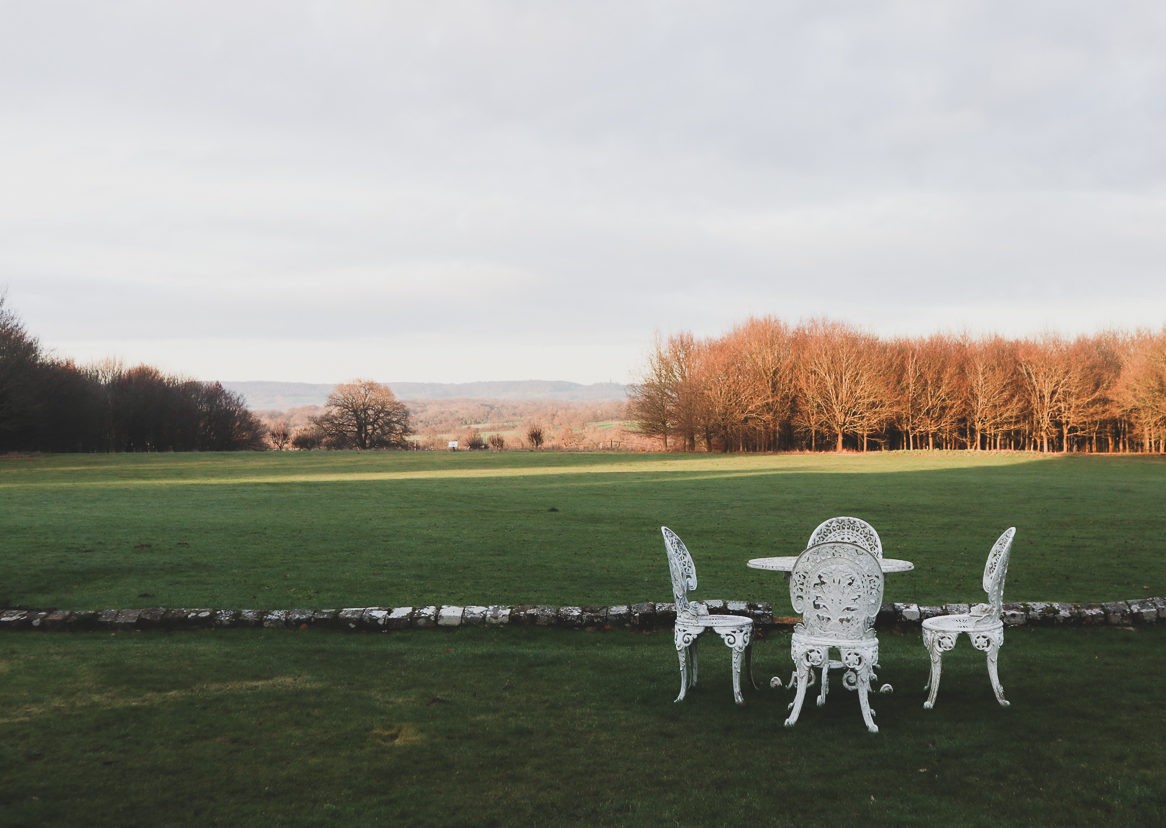 In a very short walk from the village the Chiddingstone Castle is situated. To accompany the Chiddingstone scale, it’s quite small as well and was founded by a member of Streatfeild family as well in the early 19th century.

Surpassing several architects, owners and engulfing some more ancient constructions, it was finally bought by Denys Eyre Bower who decided that it would be a perfect place to display his antique collections from Japan, Egypt and objects related to Buddhism and British history. 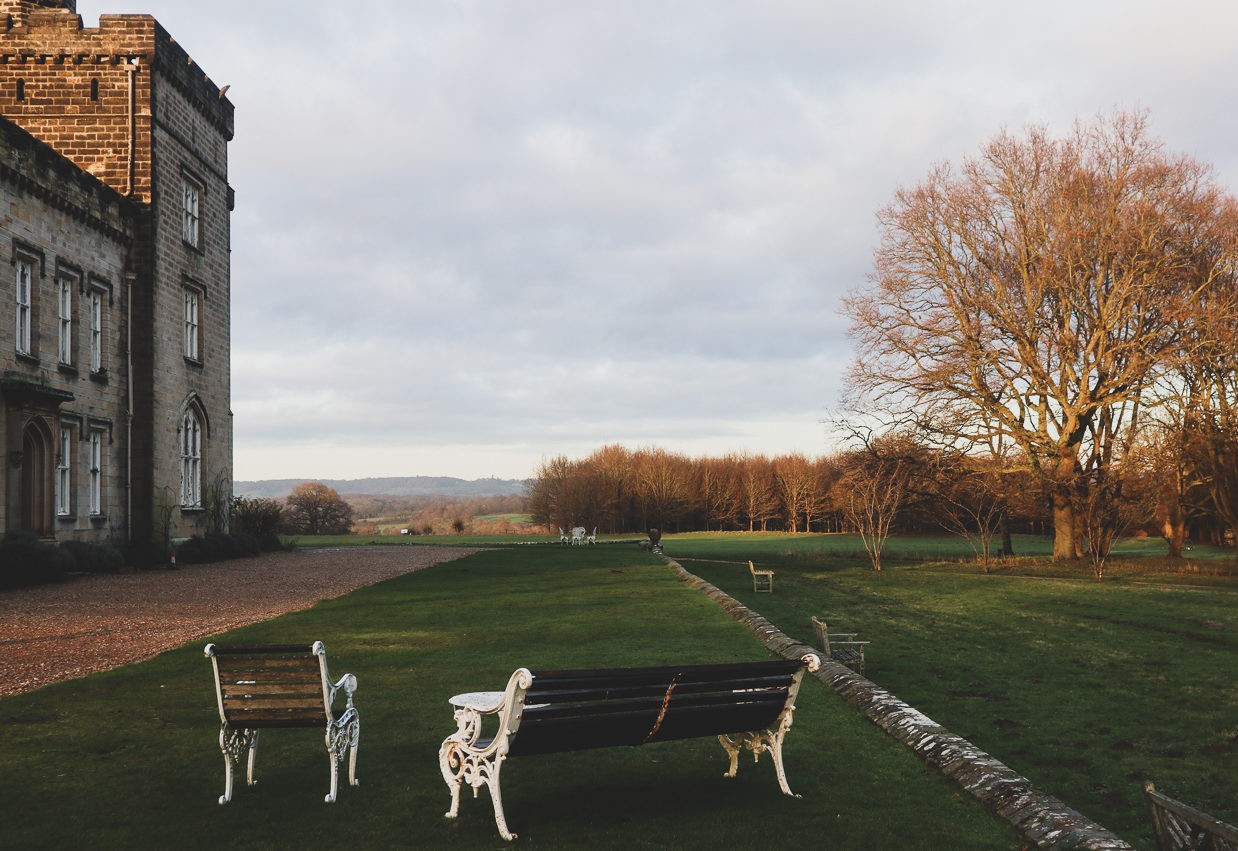 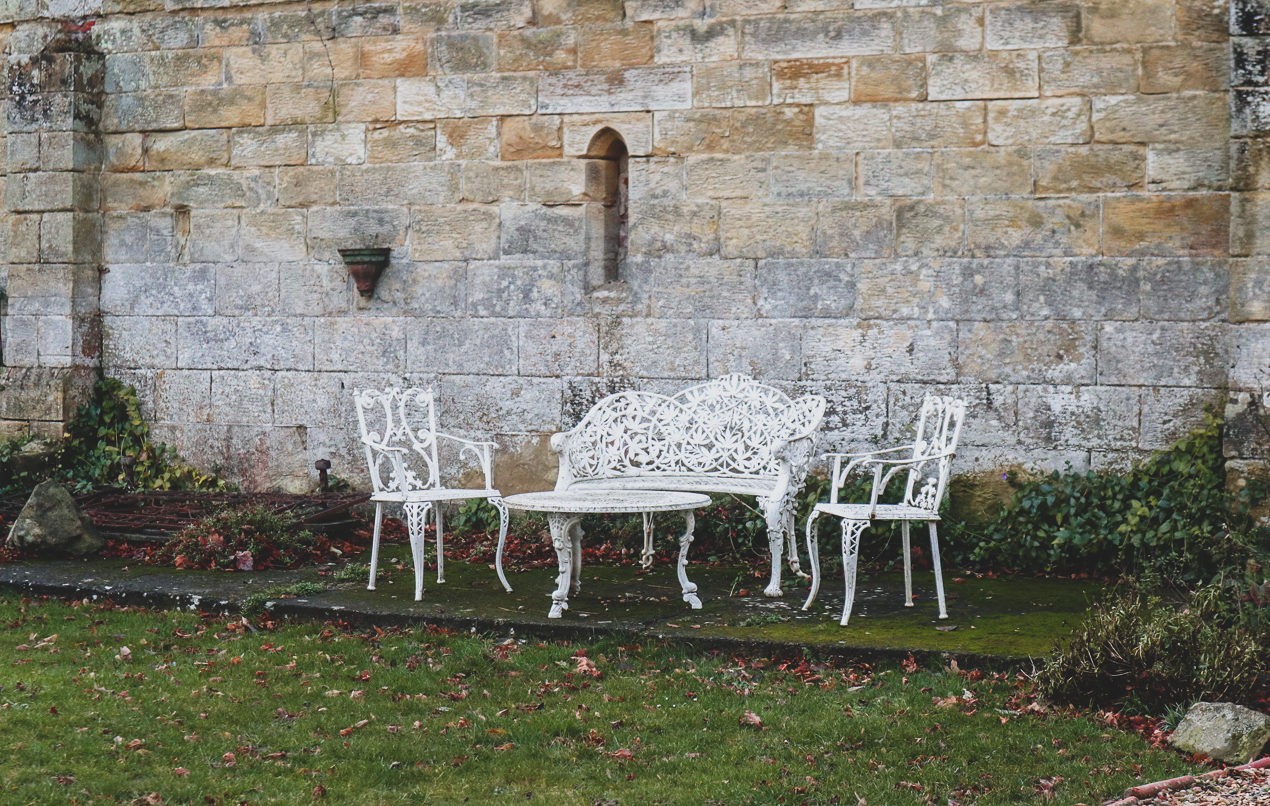 The new owner’s life sounds like a proper detective story and includes murders and suicide attempts apart from collecting precious historical items but the most important thing that upon his death the Denys Eyre Bower Bequest was founded.

Now Chiddingstone Castle is open to public and so are its exhibits – but unfortunately it was closed during our visit (it reopens on the 30th March 2019). The views around the castle are really pretty – including a charming lake and a bridge over it. 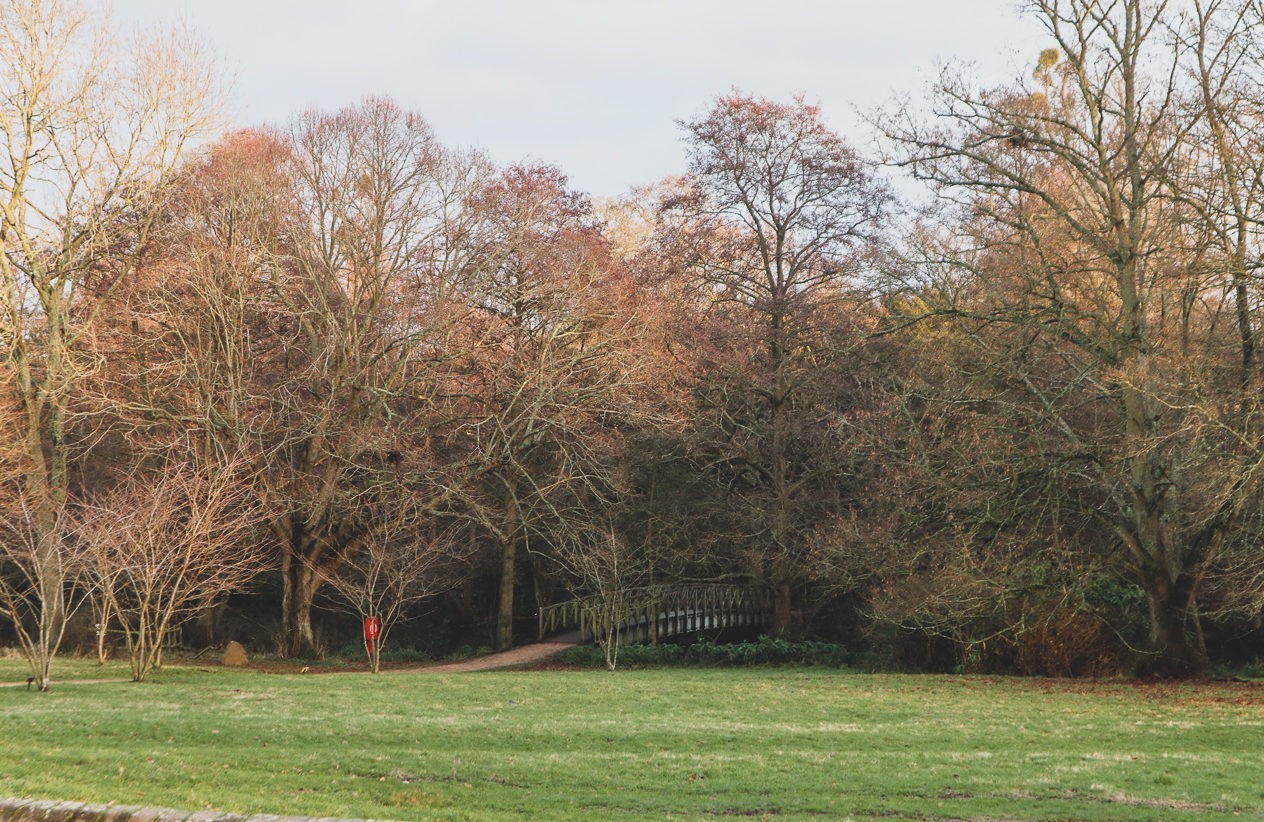 After exploring the Chiddingstone, we’ve moved to the main destination of our trip – to the Langshott manor in Surrey (to make it clear from the very beginning, our stay was not sponsored in any way by the hotel). British countryside always makes me fall in love with it over and over again although some narrow roads with sharp bends sometimes remind me of the theory driving test exercises 🙂 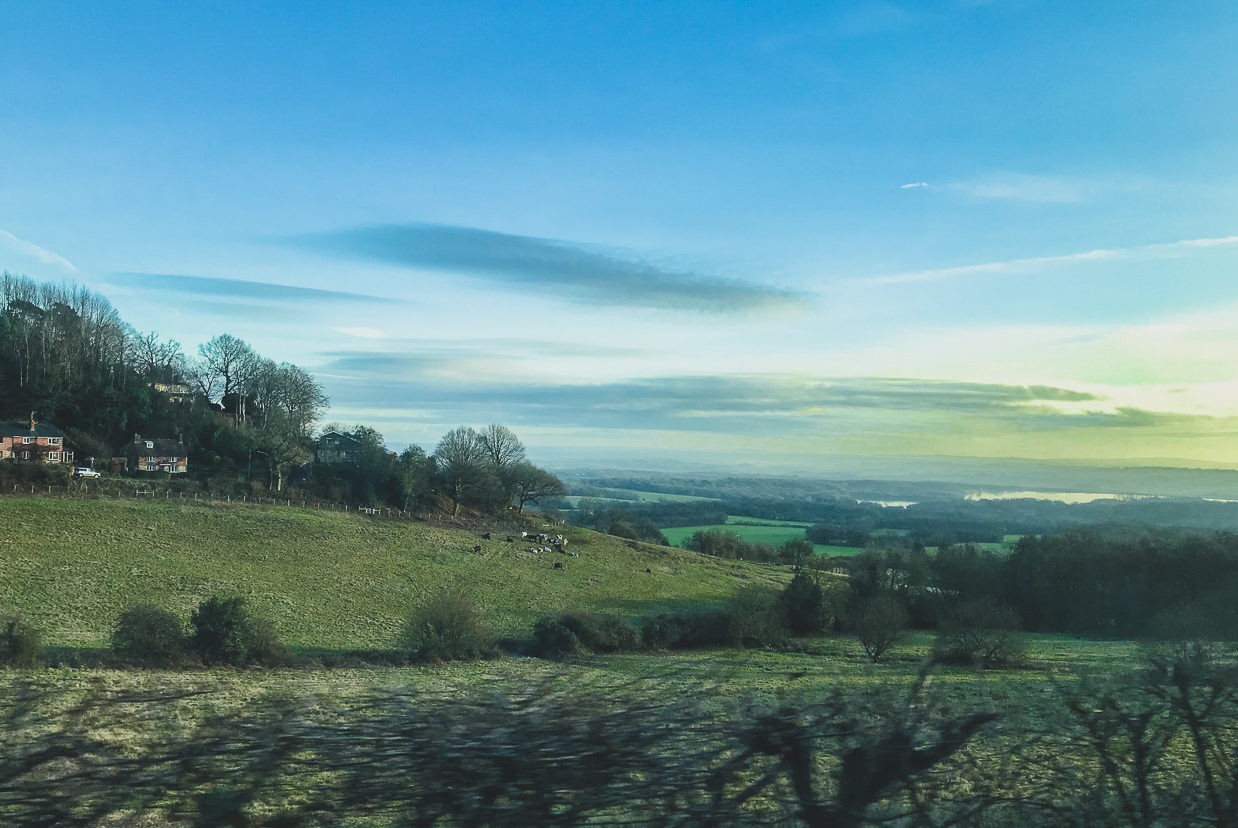 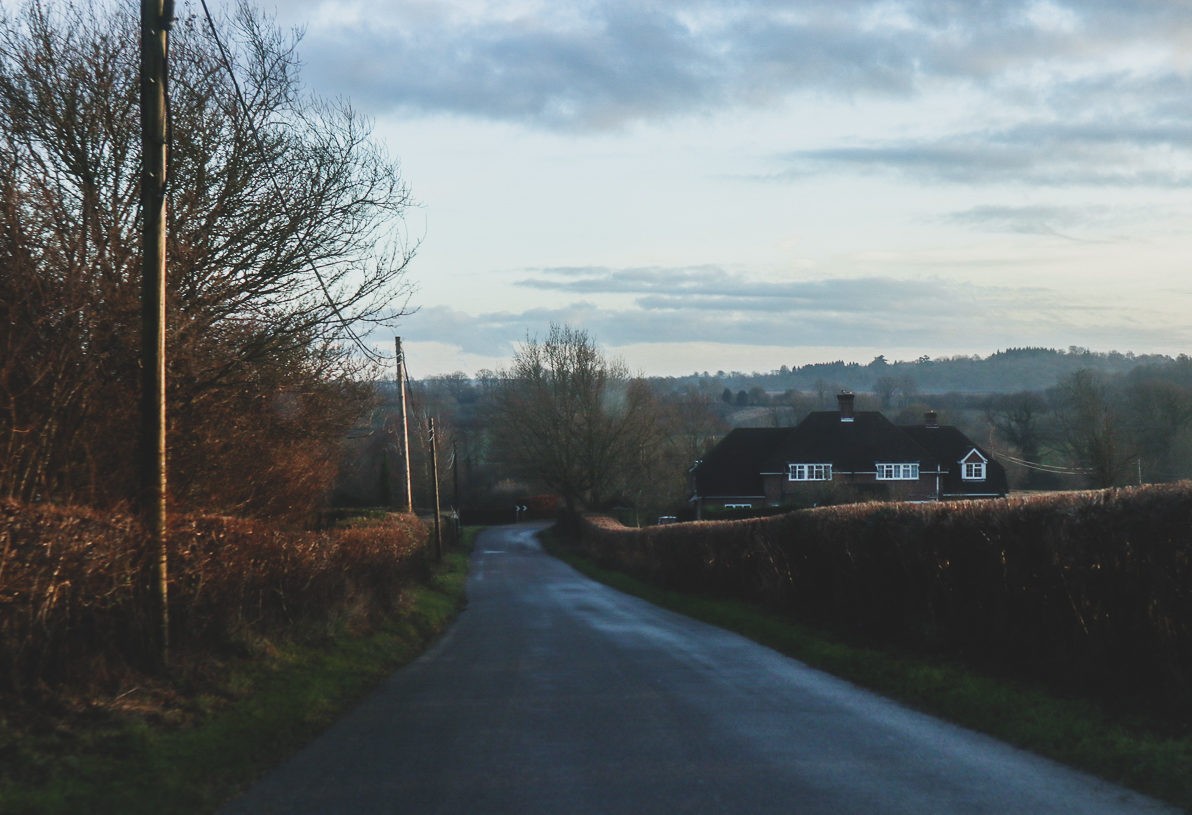 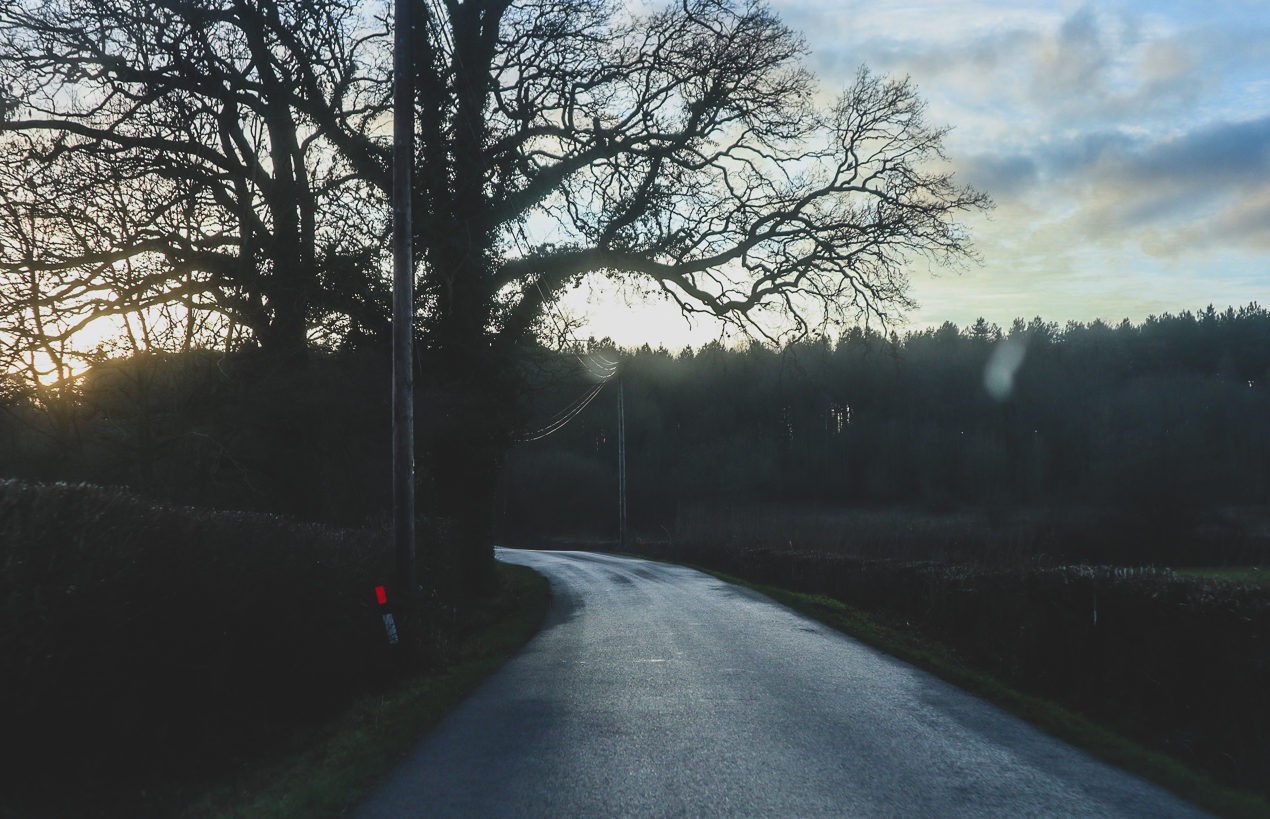 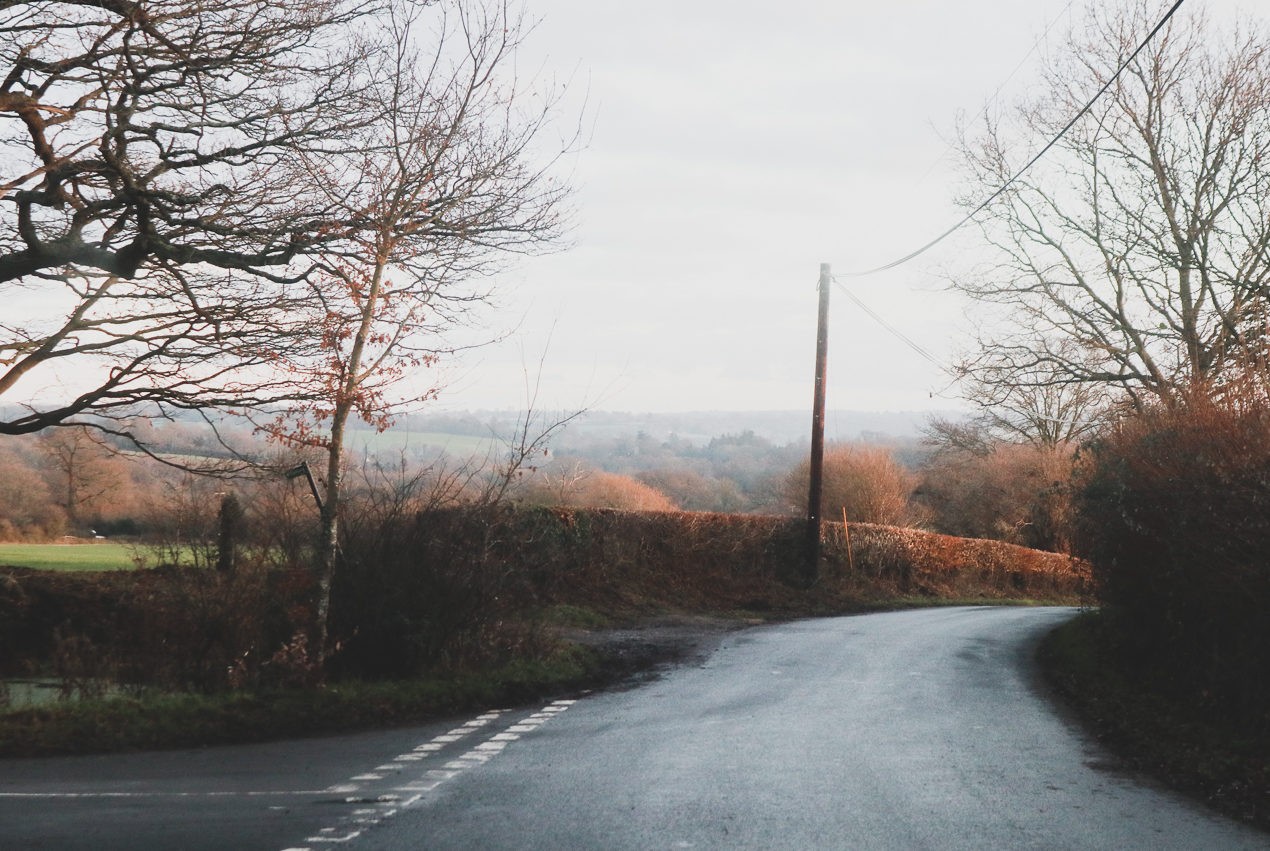 Staying in a manor

The manor we were staying in is a very fairytale-looking hotel with a nice territory. It was built in 1580 and still carries the initial outlook. Btw, some rooms are closely linked to that epoch – they are even named after Henry VIII’s wives! 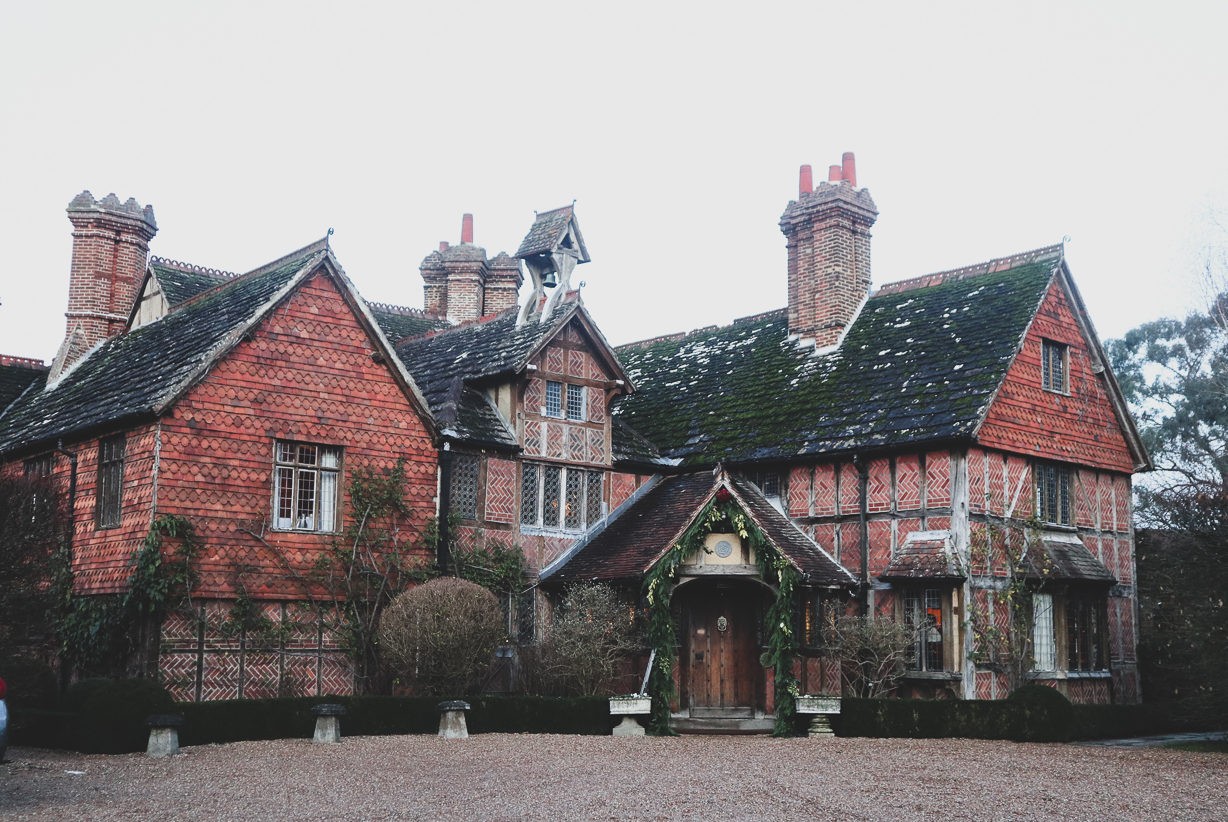 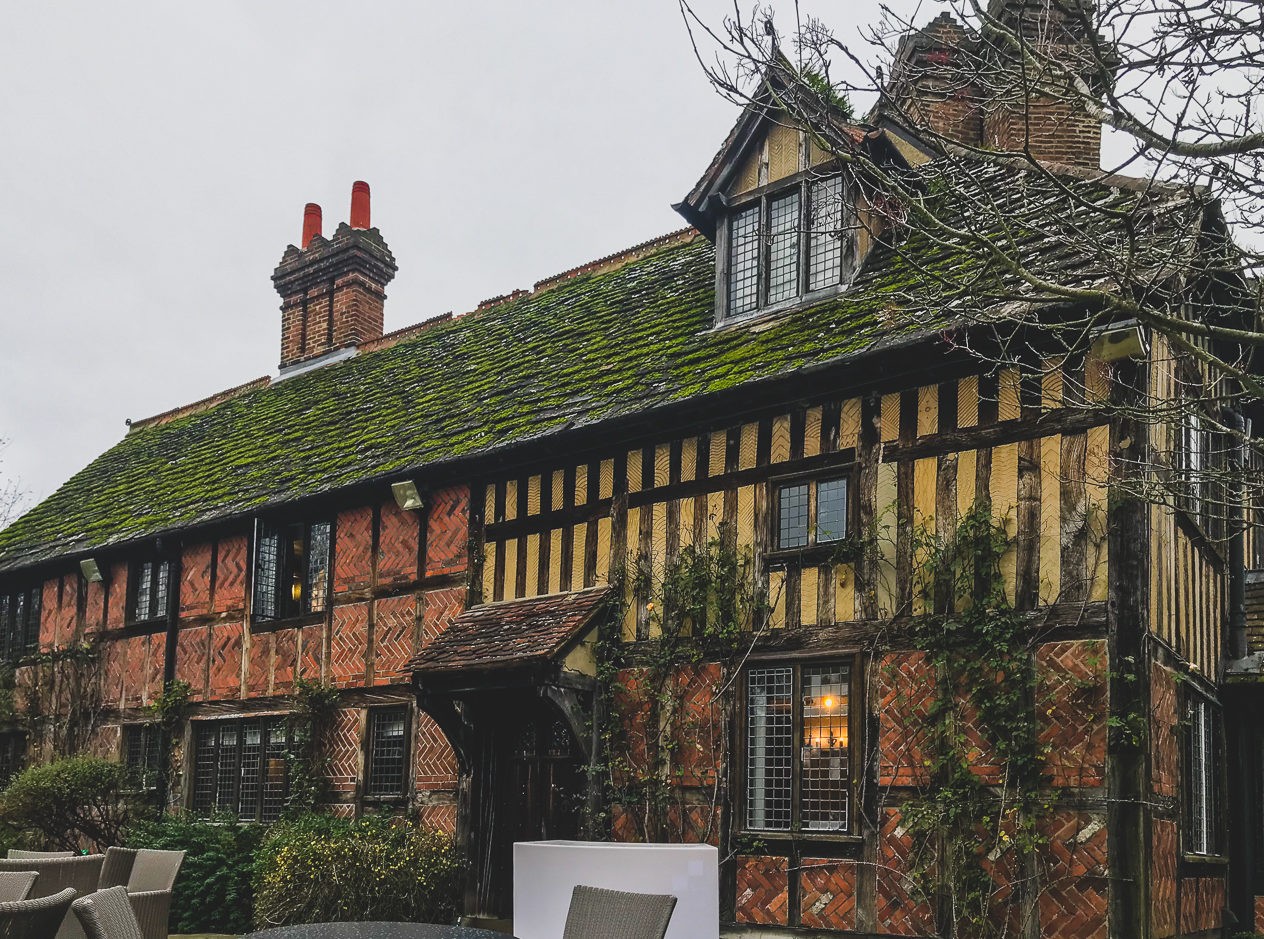 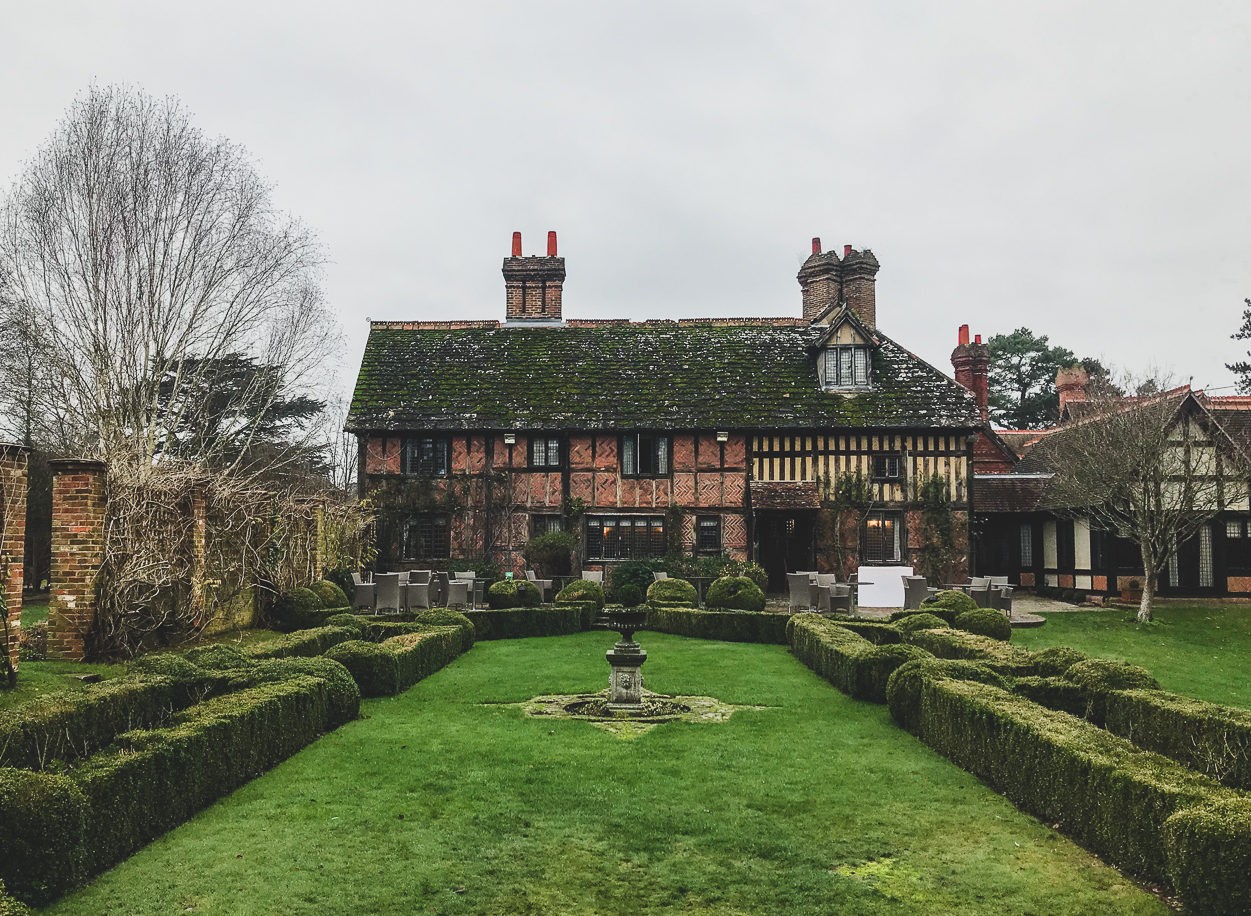 Insides however are partly modernised. Our room was right under the rooftop and nice with a view over the garden and a decorative fireplace but the best part of it was a huge bath where I assume I could almost swim like in a pool. L’occitane products added to the atmosphere.

I believe the garden must look magnificent in summer! I really liked the Mulberry restaurant – the Festive dinner and lunch in there were really good. It’s really worth visiting even if you’re not staying in the hotel – just drive around and pop in. Real fireplaces are placed in the lounge as well. 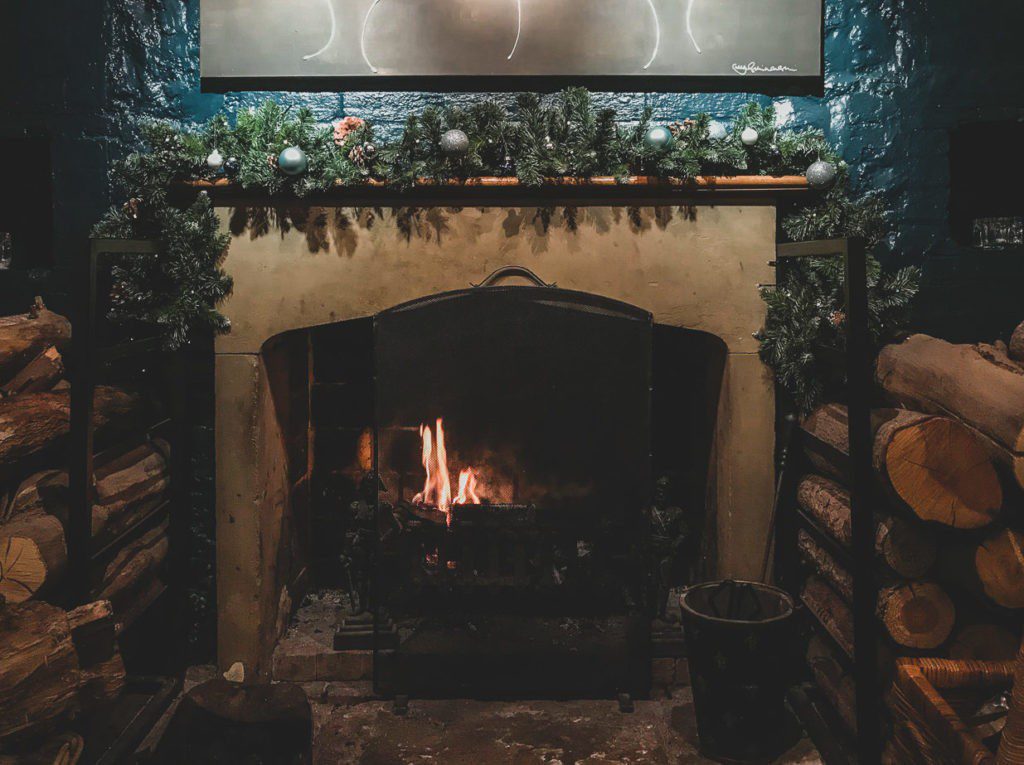 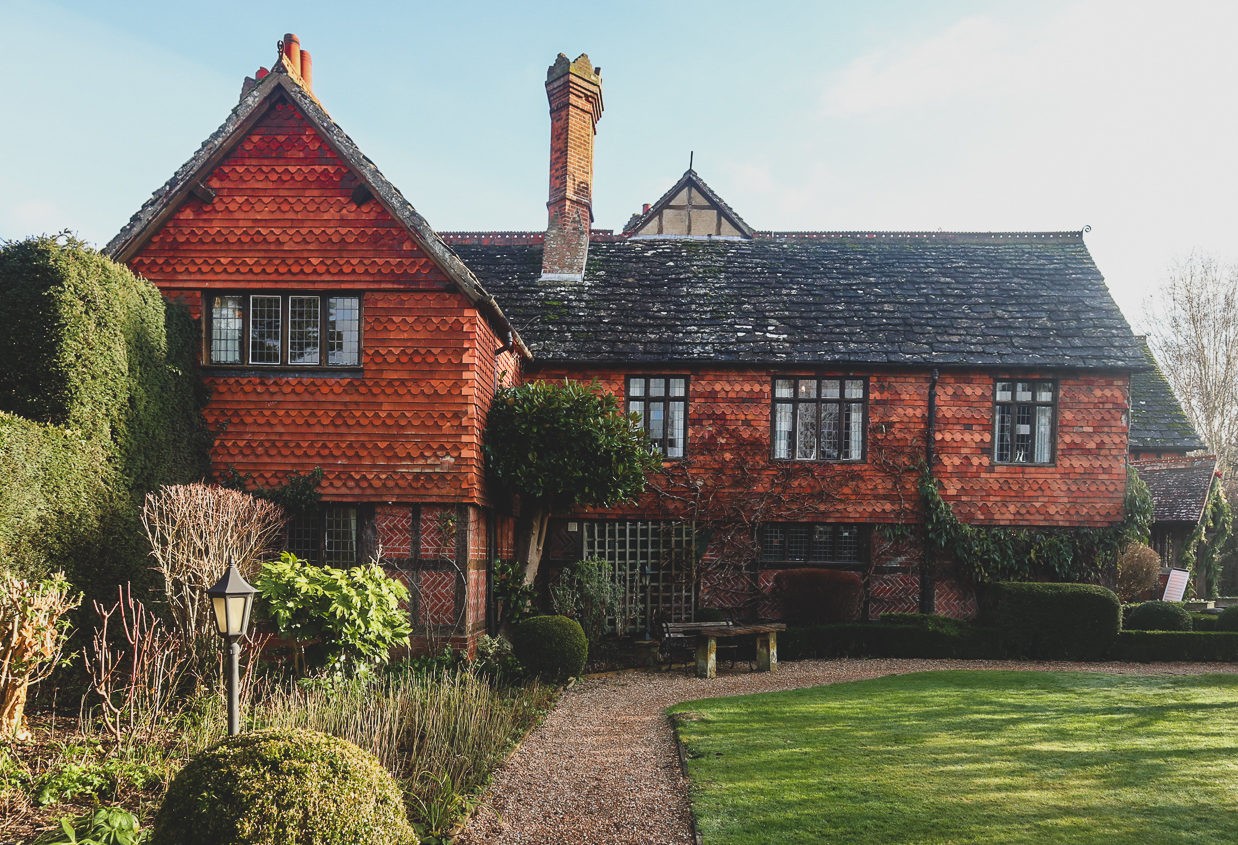 We stayed in the manor for two nights. Upon our arrival we had a cream tea (jams were delicious!) and after a short break we proceeded to a dinner with crackers and delicious courses. Of course, we wore our Christmas Jumpers too 🙂

As for the next day, after the breakfast we had a walk around Horley, the closest town to the hotel. It’s a pretty small town but it has a long story going back centuries, from Saxons to the Tudors.The peculiarity of it is that Gatwick airport is quite close so you see planes flying over it quite often. I must admit that surprisingly the noise produced by them is hardly noticeable. 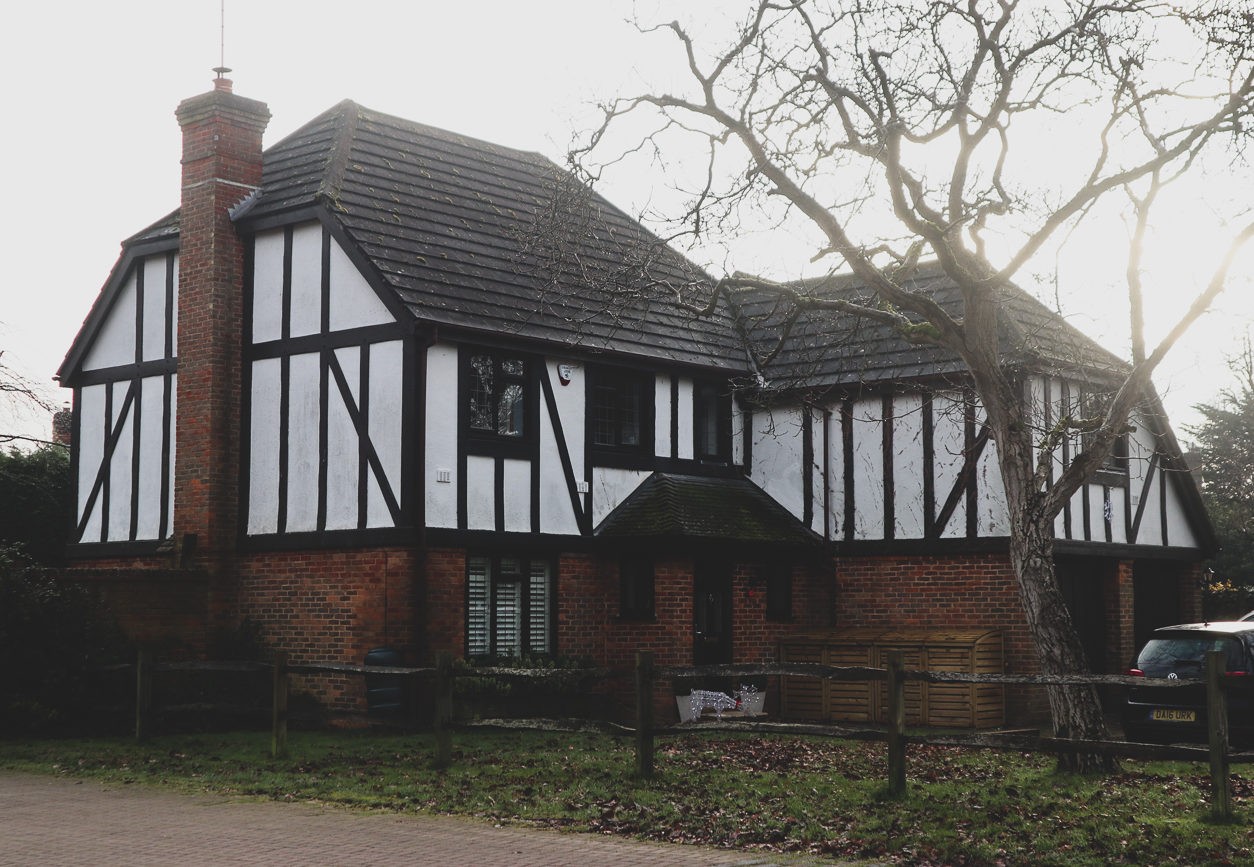 Interesting: if you have time, consider visiting Hever Castle where Anne Boleyn lived once.

The final remarks: did I like my experience? Definitely yes! I might even plan something similar for the next year. But would I like to return to Langshott manor? Not for the Christmas period. I usually tolerate the holiday prices quite well but unfortunately I believe it was too overpriced.