Discover Rabbit Island: all you need to know

Japan is famous for its animal-related activities: you can feed deers in Nara, pop into animal cafes with shiba inu, owls, cats, and feed koi in ponds… But Okunoshima, or the Rabbit Island, is really special – visiting it might become one of the most unique experiences while you’re travelling through Japan because where else can you stroke and feed so many fluffy bunnies in the wild? 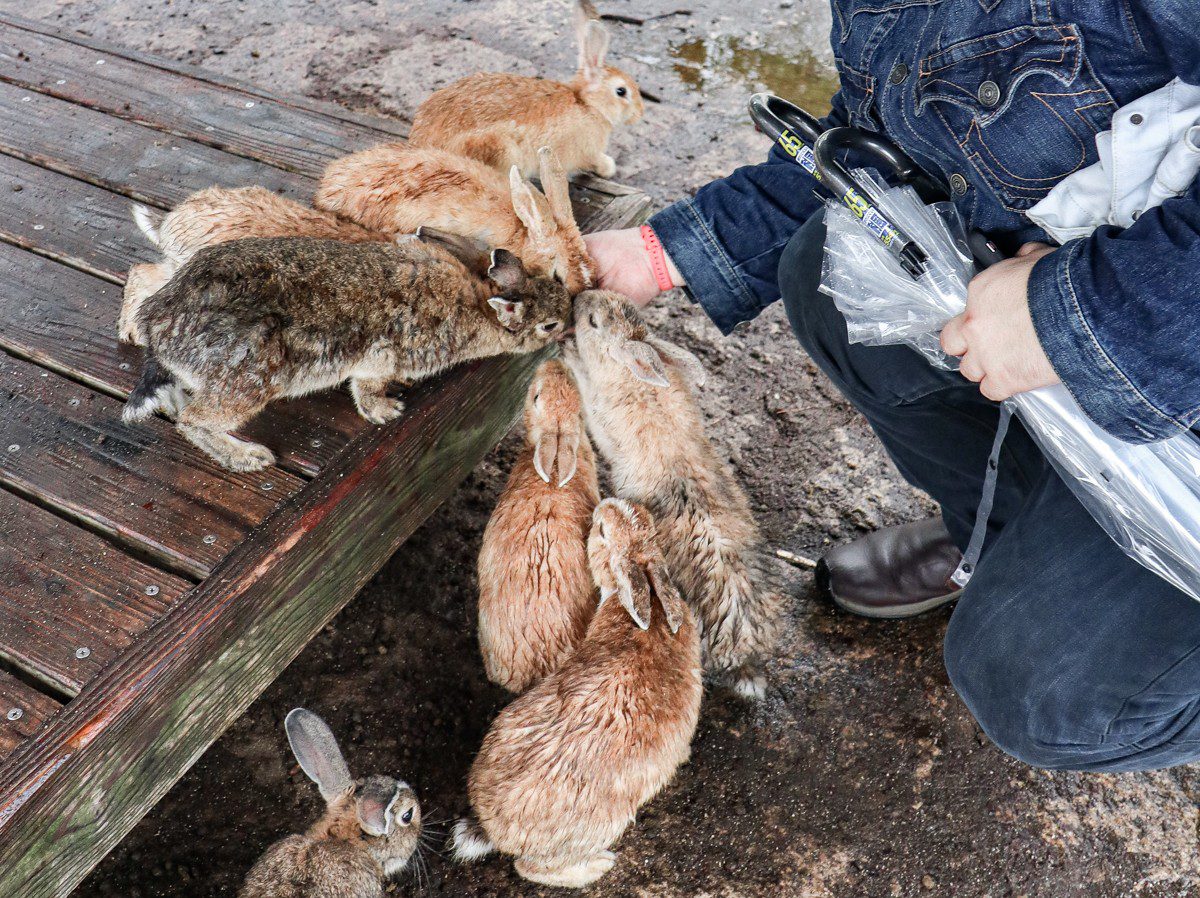 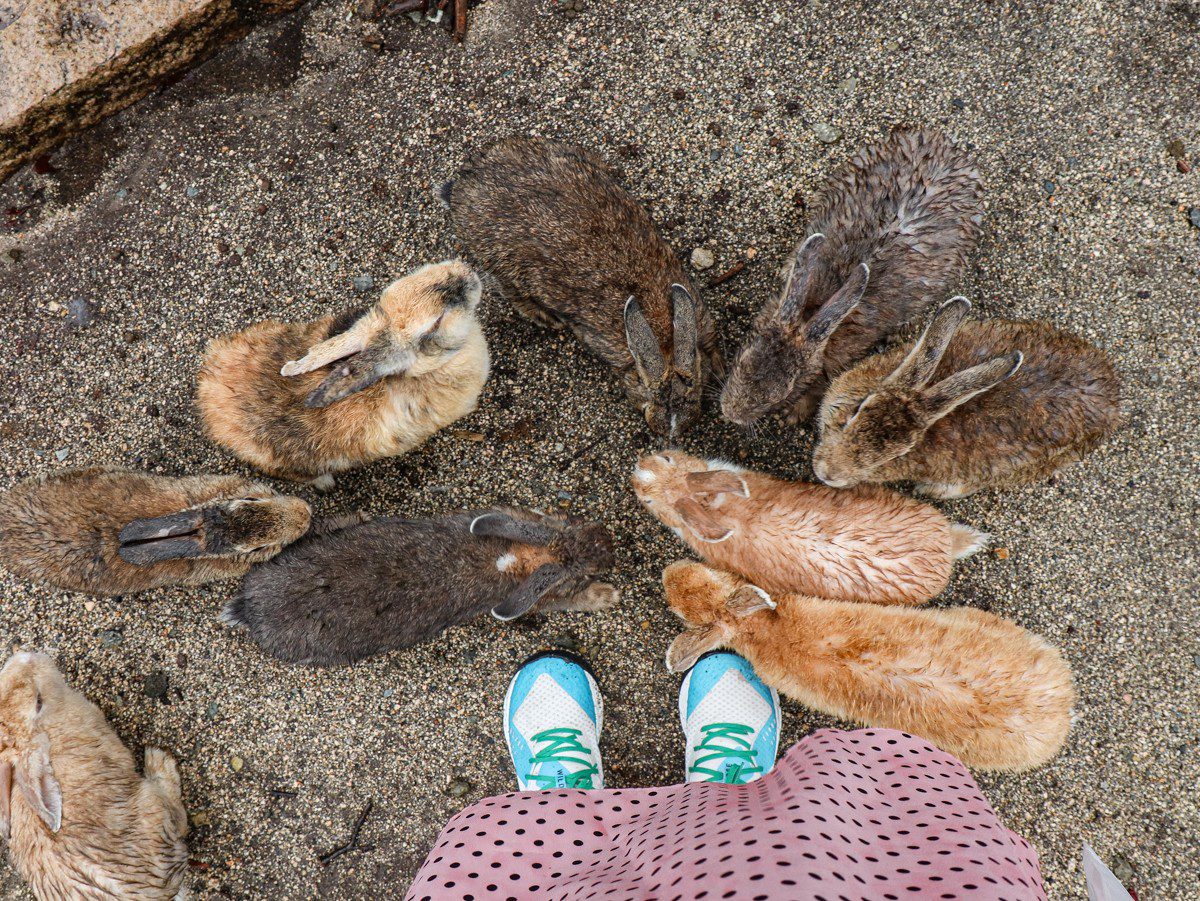 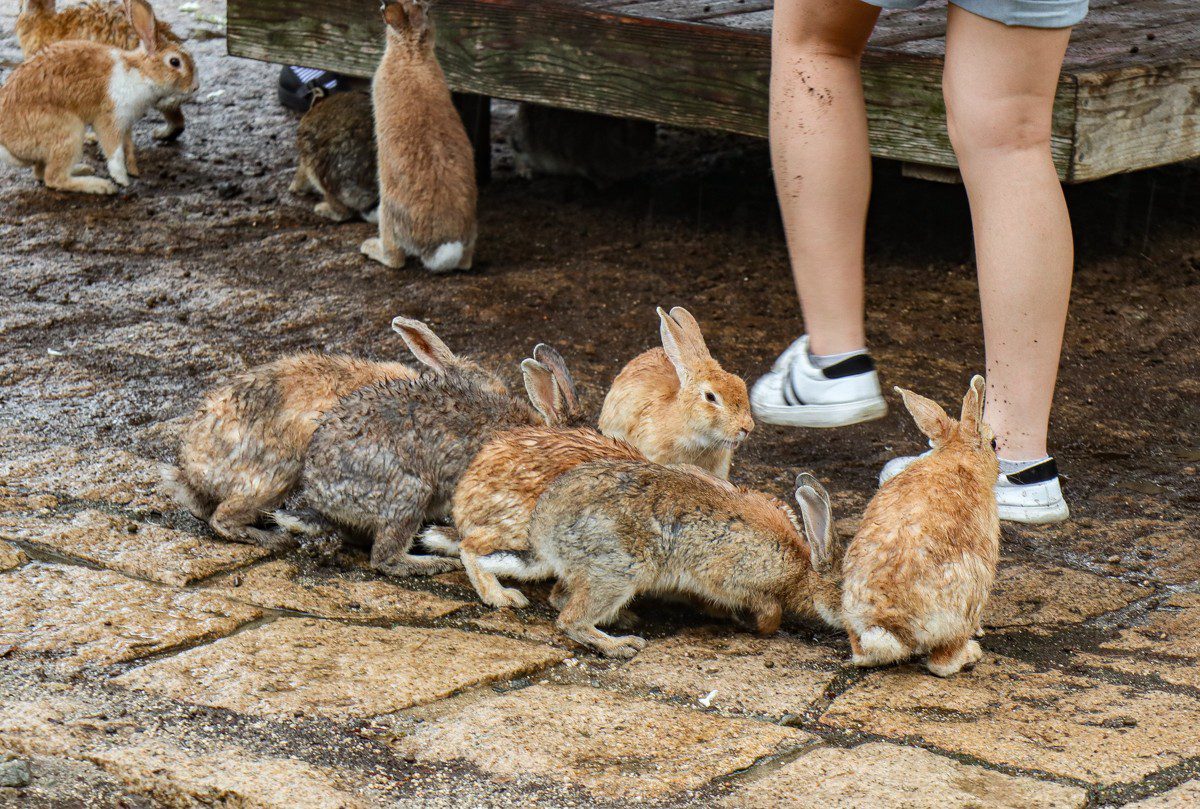 But there are also things to be beware of and the whole trip requires some advanced planning skills. Scroll down to learn more!

Okunoshima is located in Hiroshima prefecture. It’s a small island in the Seto Inland Sea of Japan. As it’s a home for a number of feral rabbits now, it’s often referred as Usagi Jima, or the Rabbit Island. The landscape is beautiful there – take a moment to appreciate it when riding a ferry! 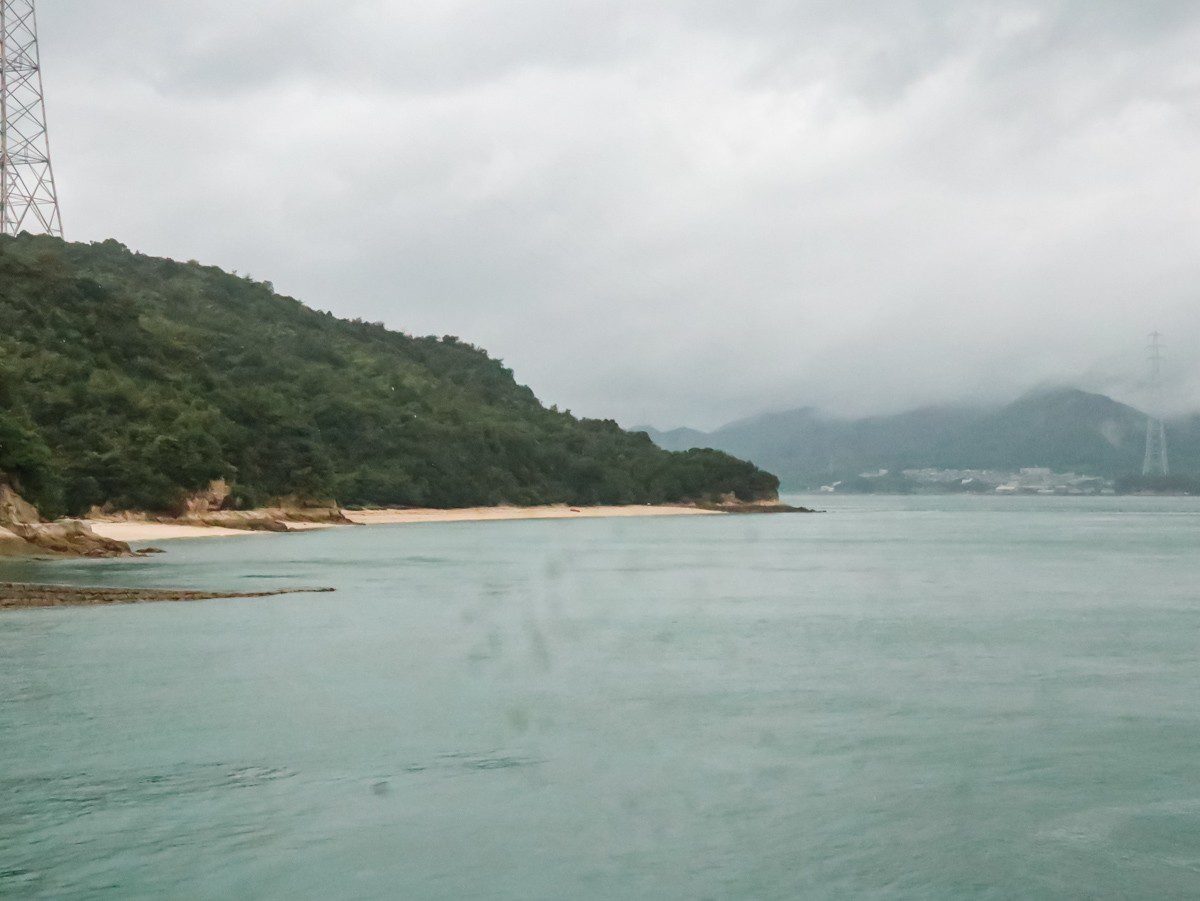 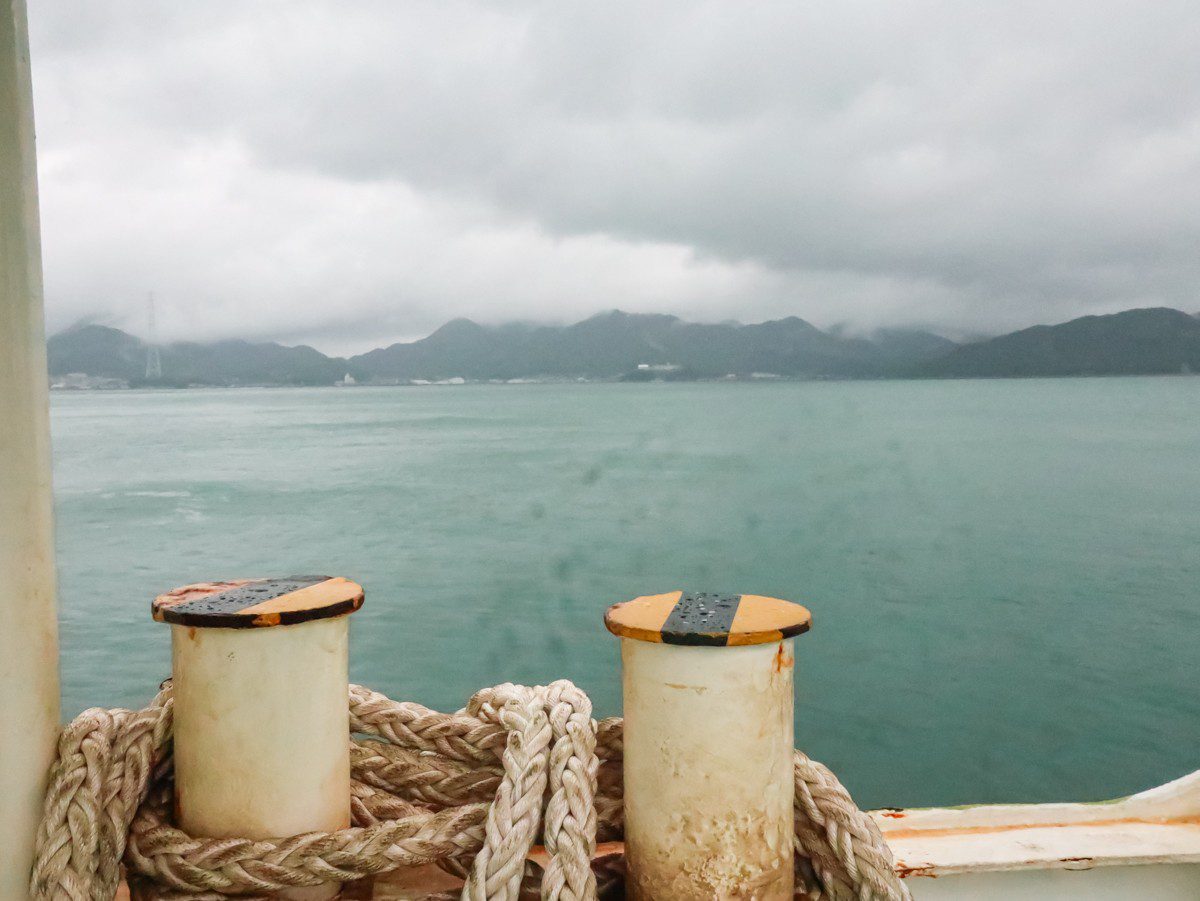 First of all, I must say from the beginning that I really loved our trip and never regretted it. But it turned out a bit different from what I’d expected. One of the factors was the weather. During our visit in August it wasn’t the best to say the least. It was raining cats and dogs, the humidity was as high as if the air was dense. Moreover, the rains were so strong these days that the weather was flagged in an emergency state, a few trains were cancelled, so actually I was surprised that we made it to the island. As a result, we didn’t spend too much time on the island. 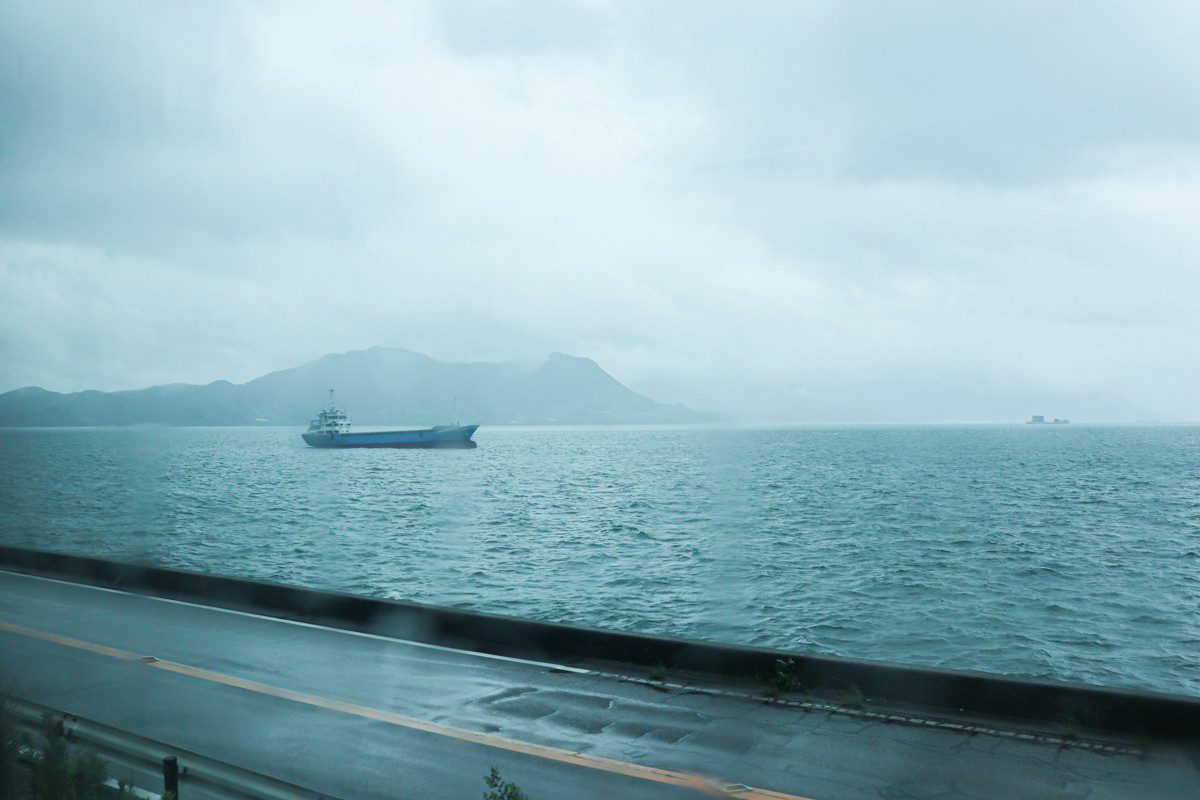 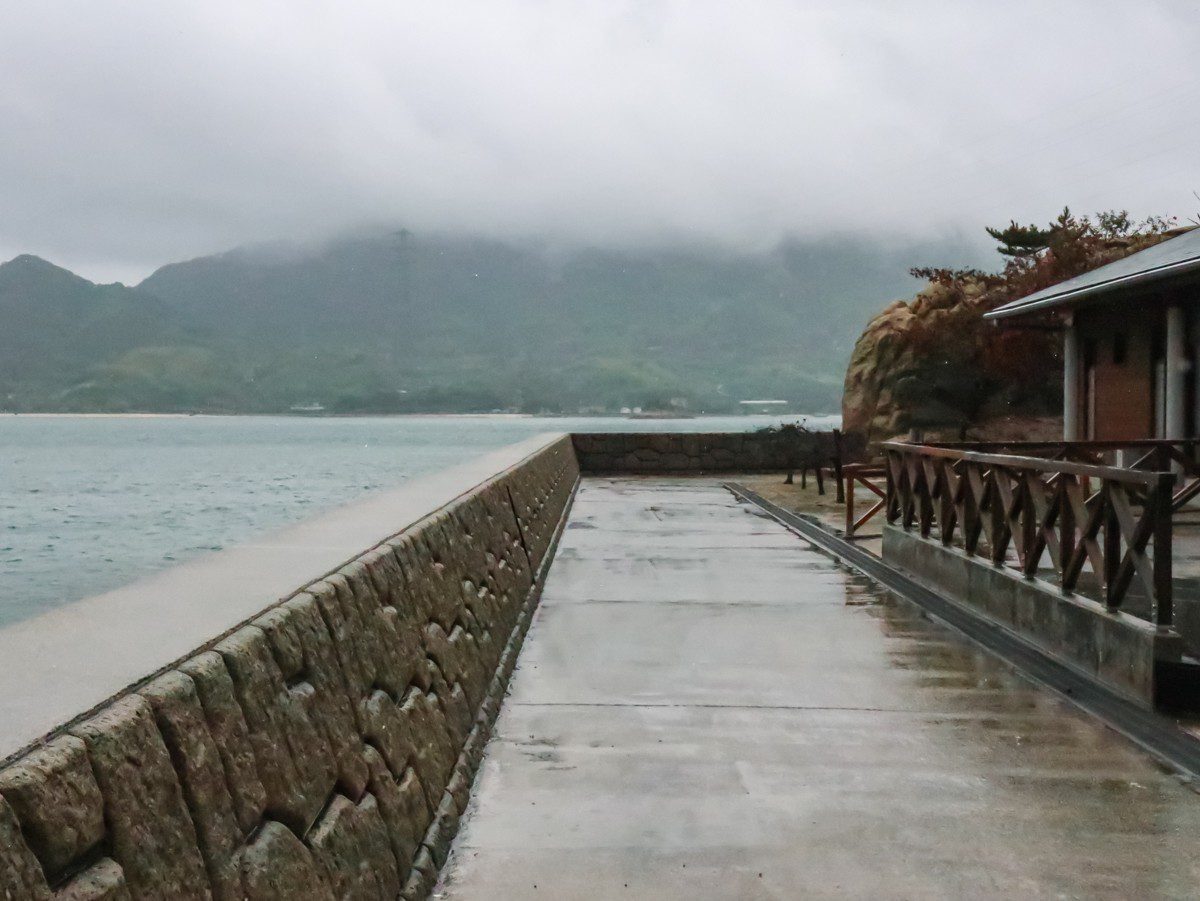 When we got to the island, it was almost impossible not to be charmed by the scenery and by the animals. There are really dozens of them, and there is no need to chase for the bunnies – they readily come to you and eat from your hands. They are cute and they are adorable and they are fluffy. 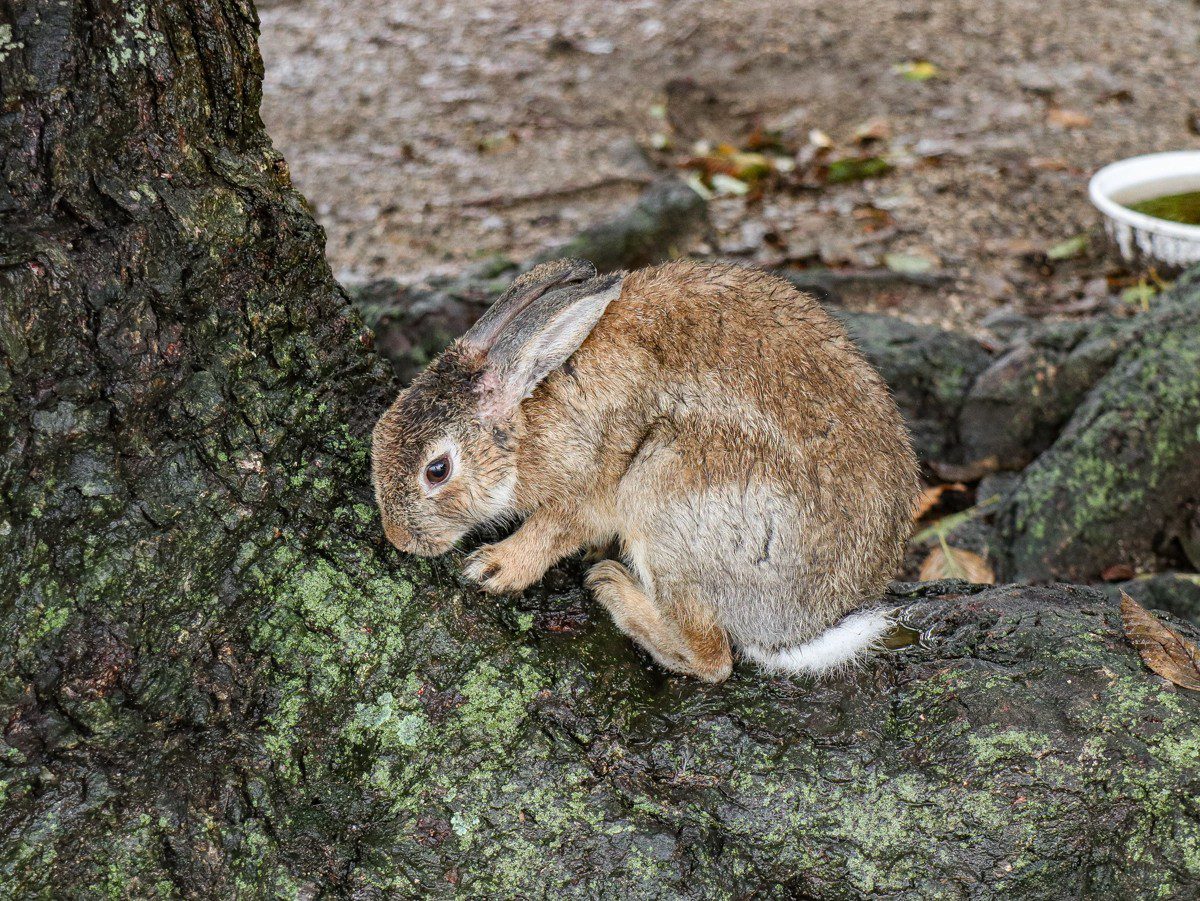 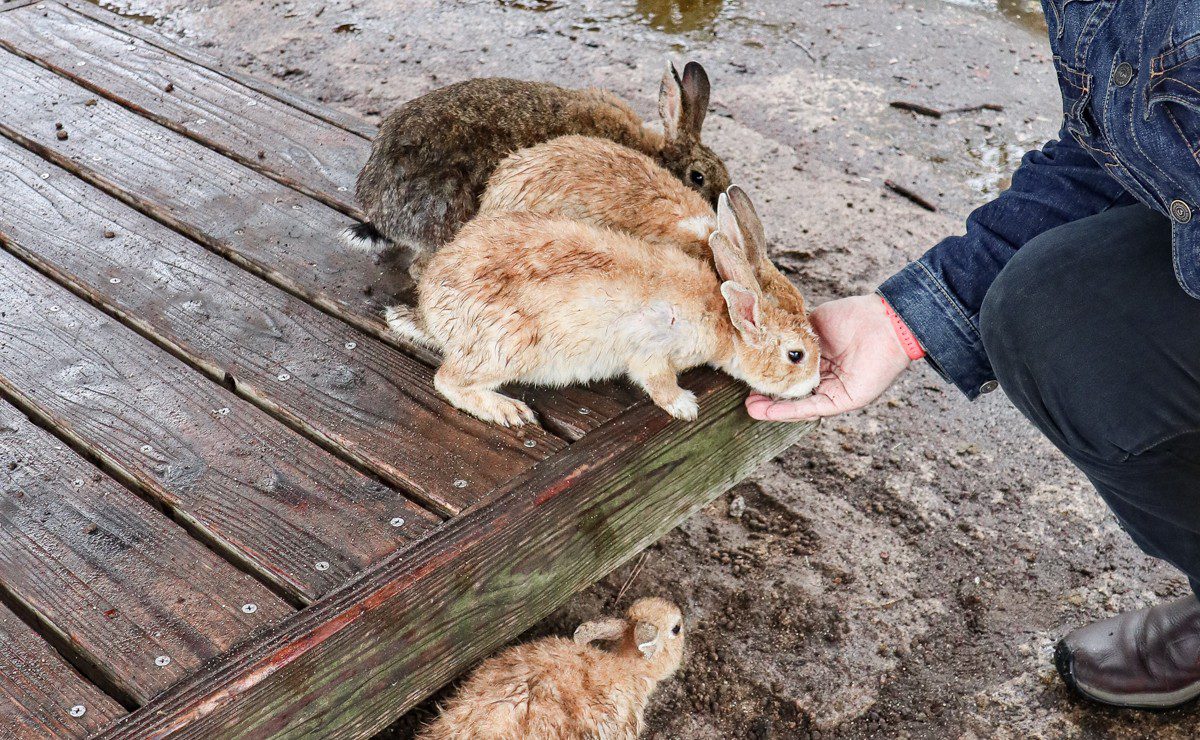 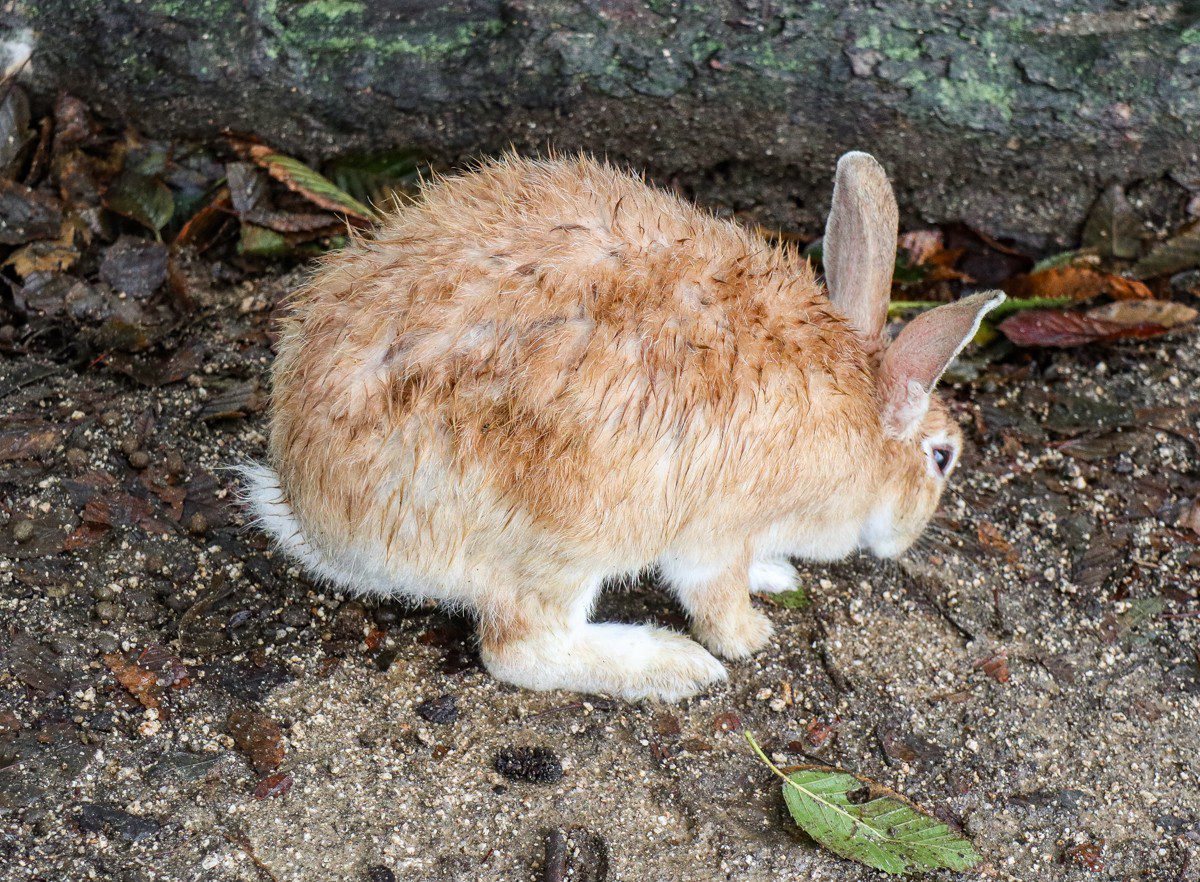 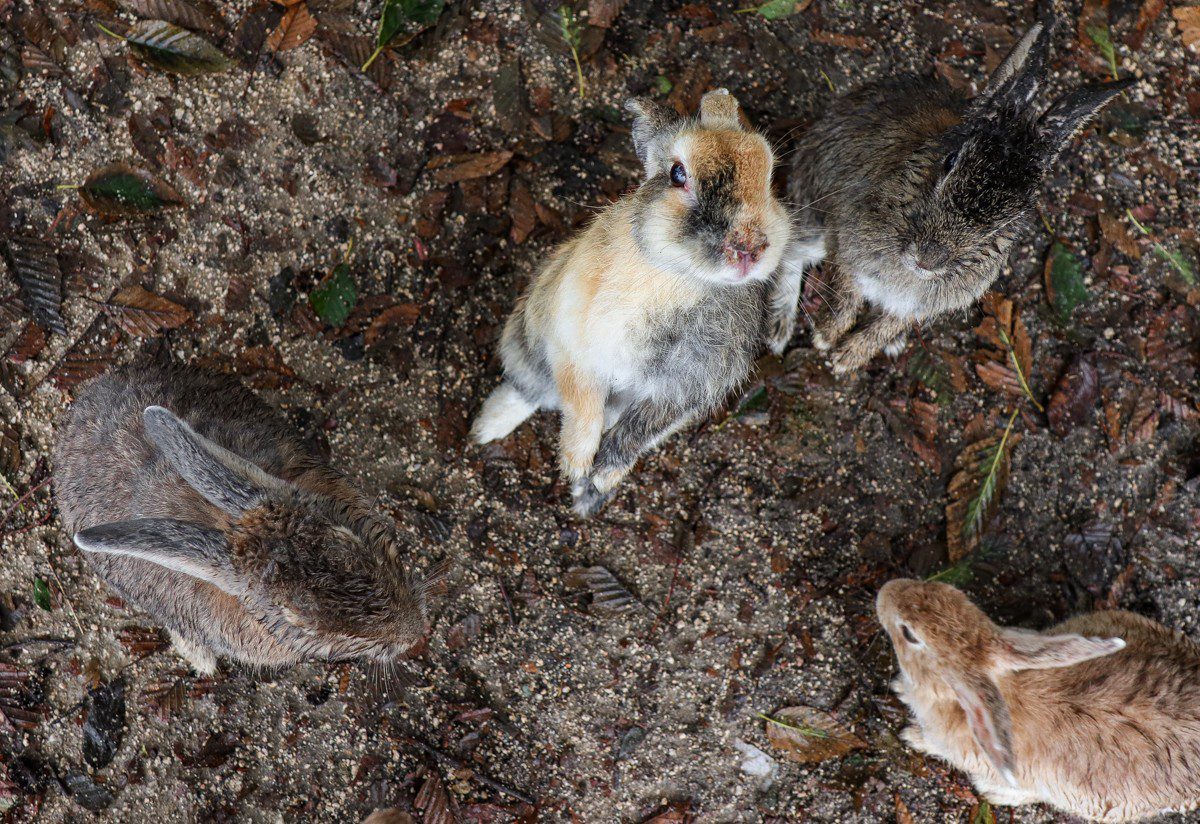 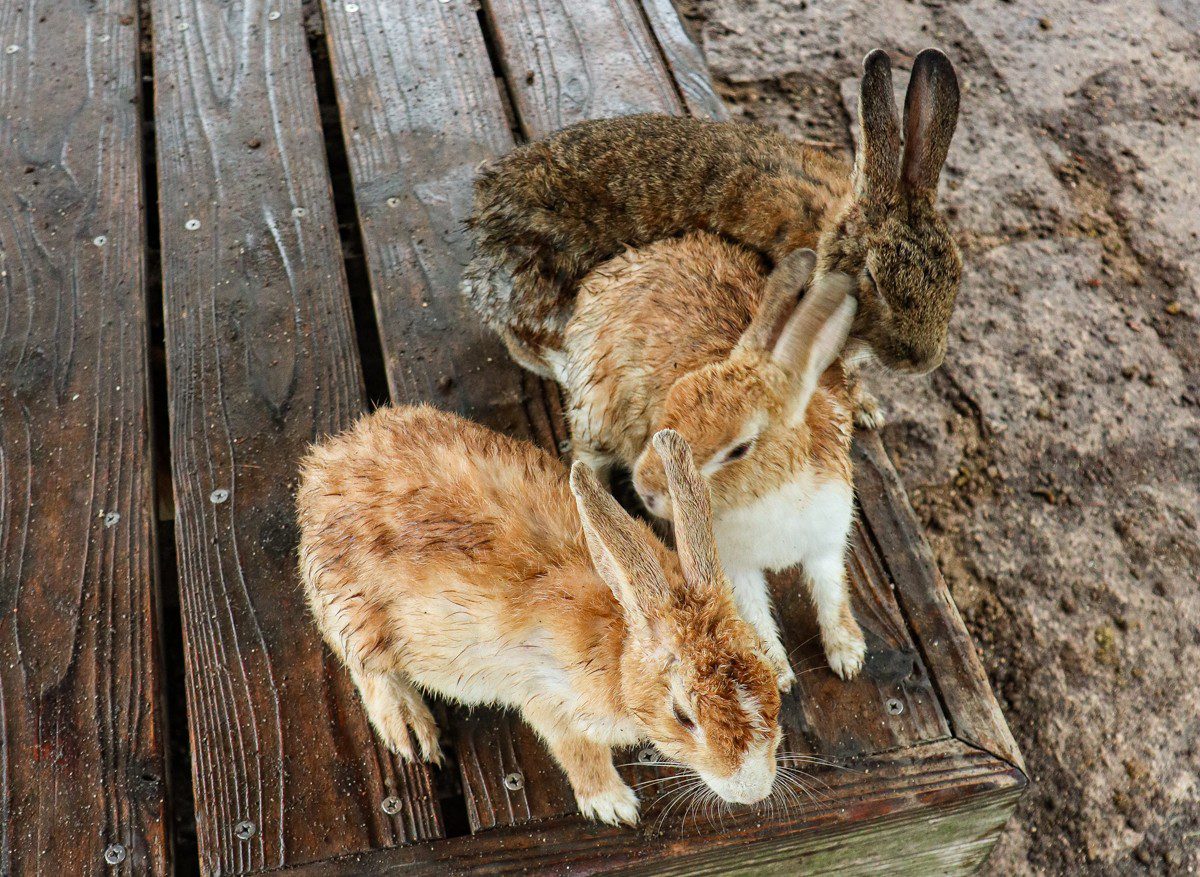 However, don’t expect them to be just like your pet bunny – these ones are really savage. Don’t be shocked: they fight and scream in front of you, some might have pieces of ears or even eyes missing because actually this is very normal for this species – they can be aggressive and they protect their territory, there is no vet where an owner can bring a rabbit after the injury. Don’t overstroke them for that reason too as they might bite you – I haven’t seen it myself but I bet they can!
Beside that, due to the weather conditions both we and rabbits were covered in wet dirt – but maybe you’ll be luckier! 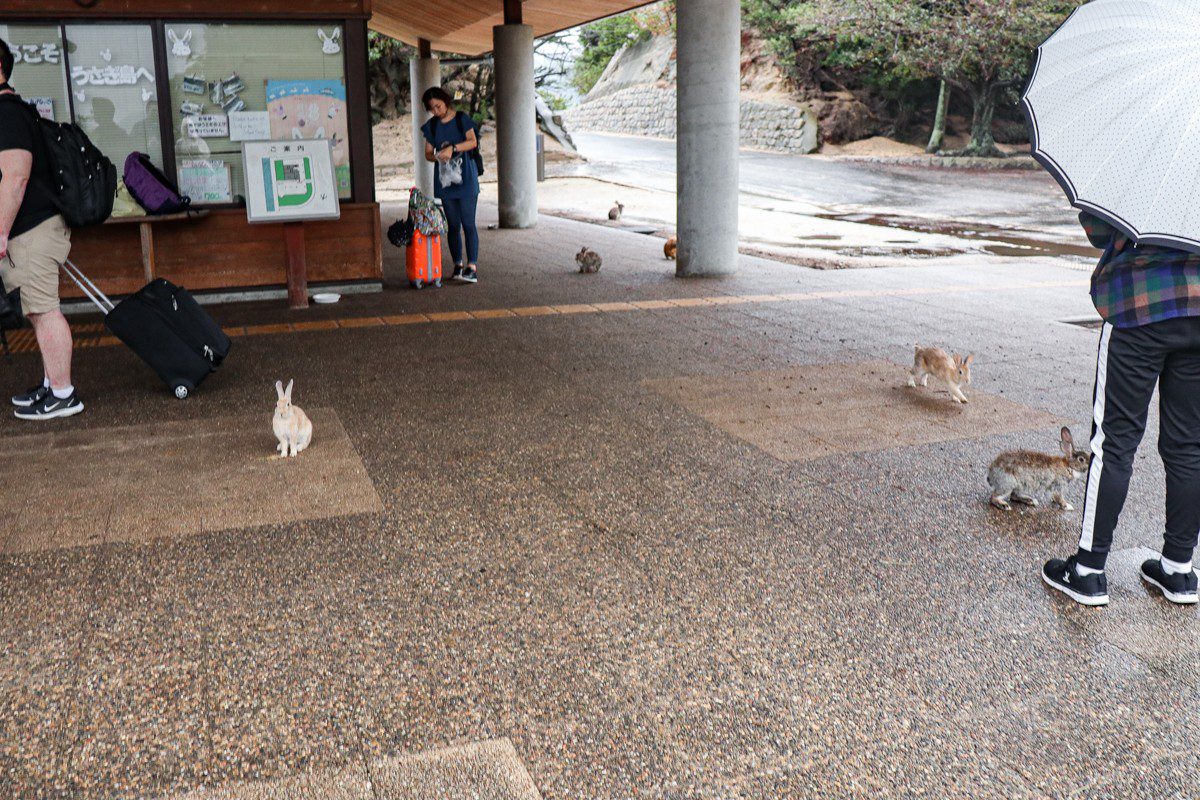 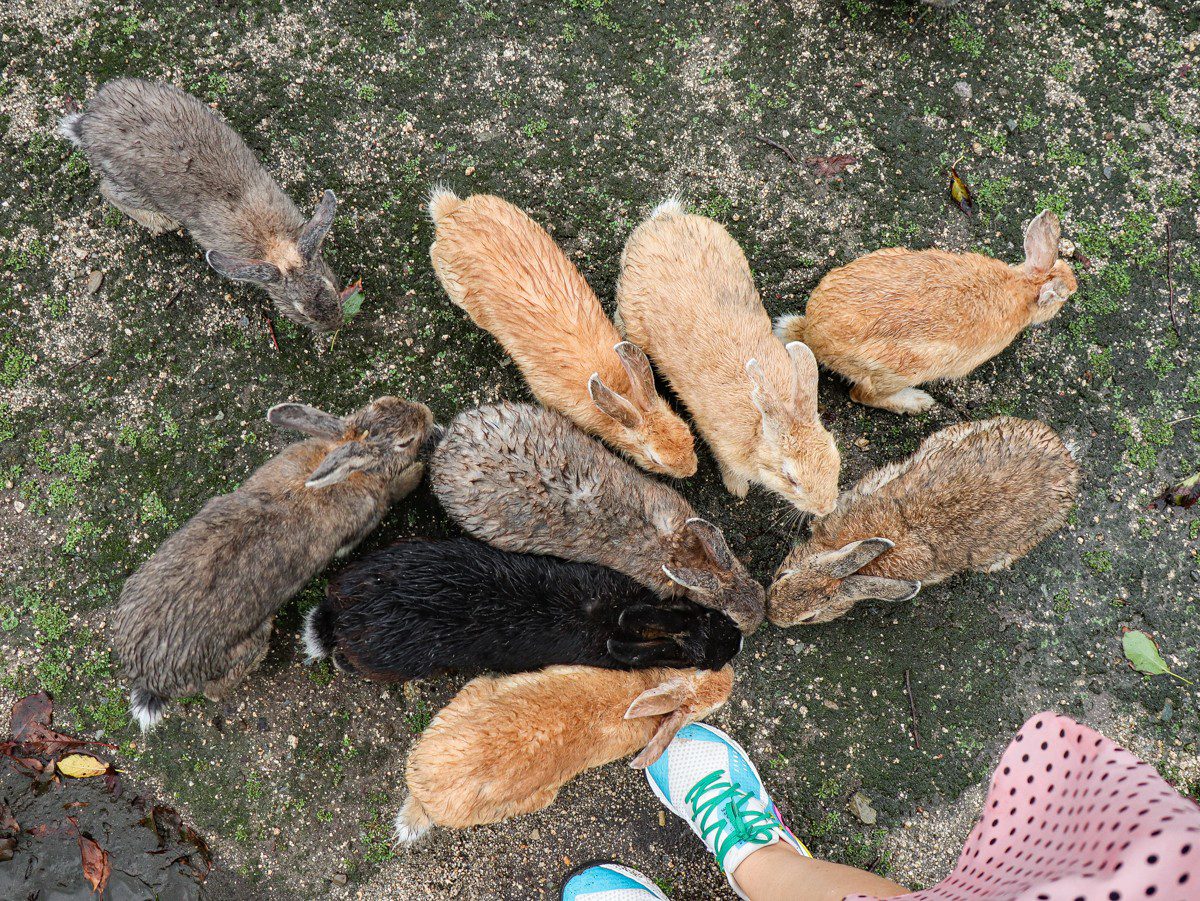 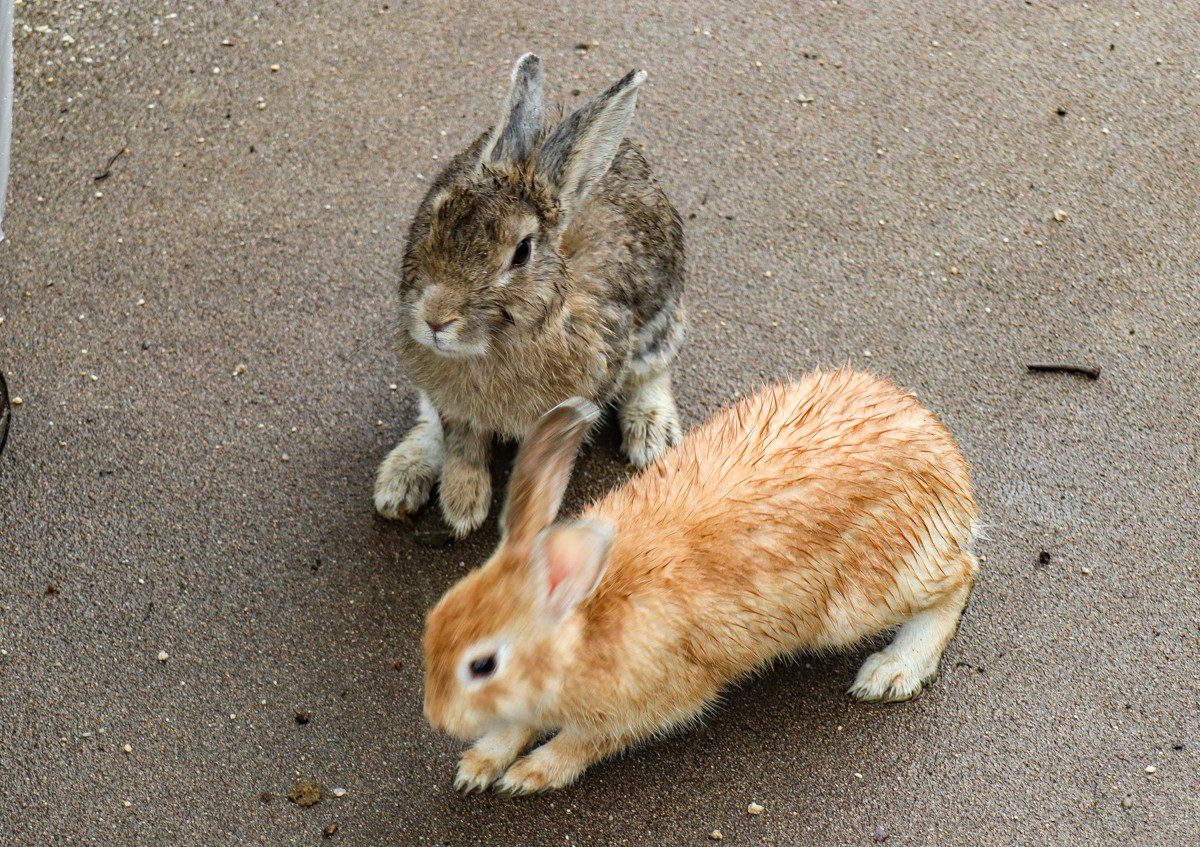 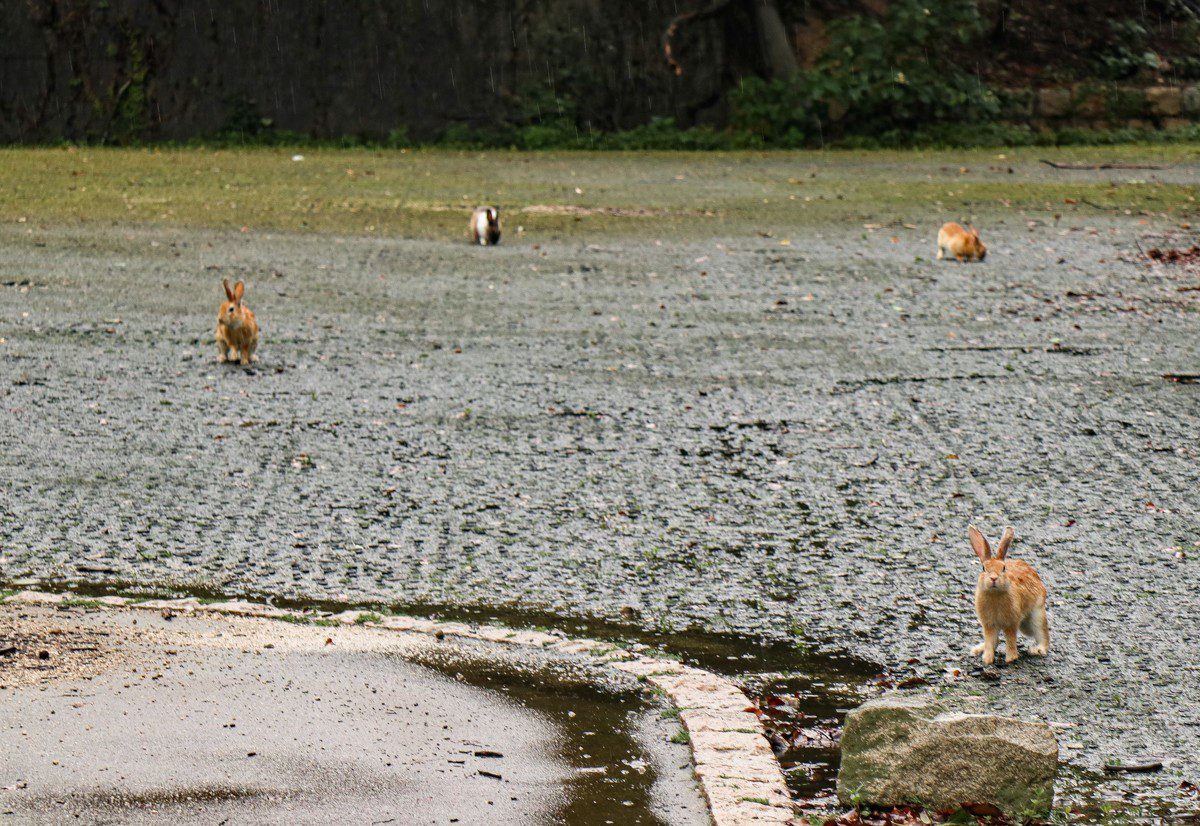 There are a few locations on the island you can visit such as the poison gas museum (see below) and Kyukamura Okunoshima Hotel.
P.S.: I must say that although I find bunnies cute, they are not my favorite animals at all, so I might be a little prejudiced. My husband, who on the other adores rabbits daydreams about coming back to Okunoshima!

Where did rabbits come from?

No one knows for sure. One story tells about the centre where the poison gas was tested on animals before and during the WWII but the research has stopped after the war – and the rabbits occupying the island now are the offsprings of the laboratory animals set loose. You can still visit the Poison gas museum btw too! 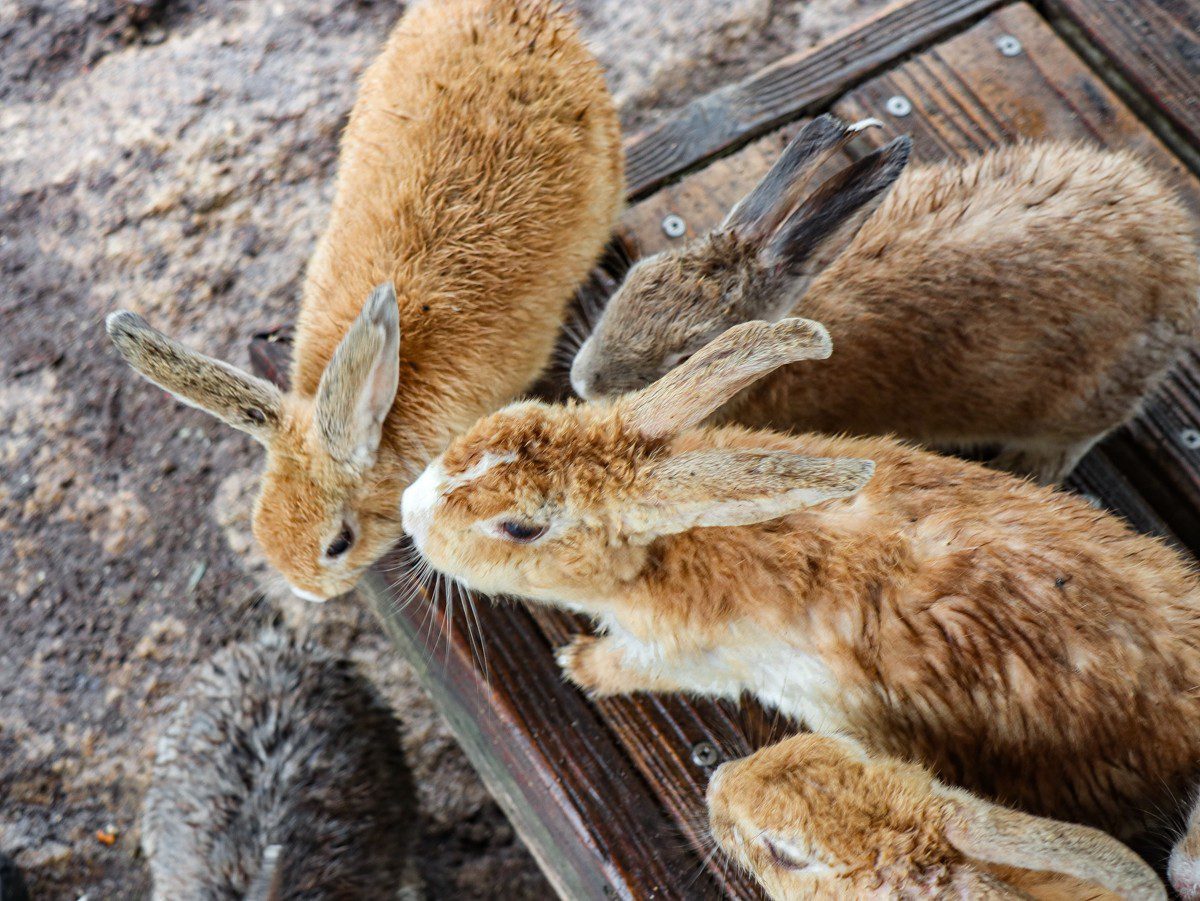 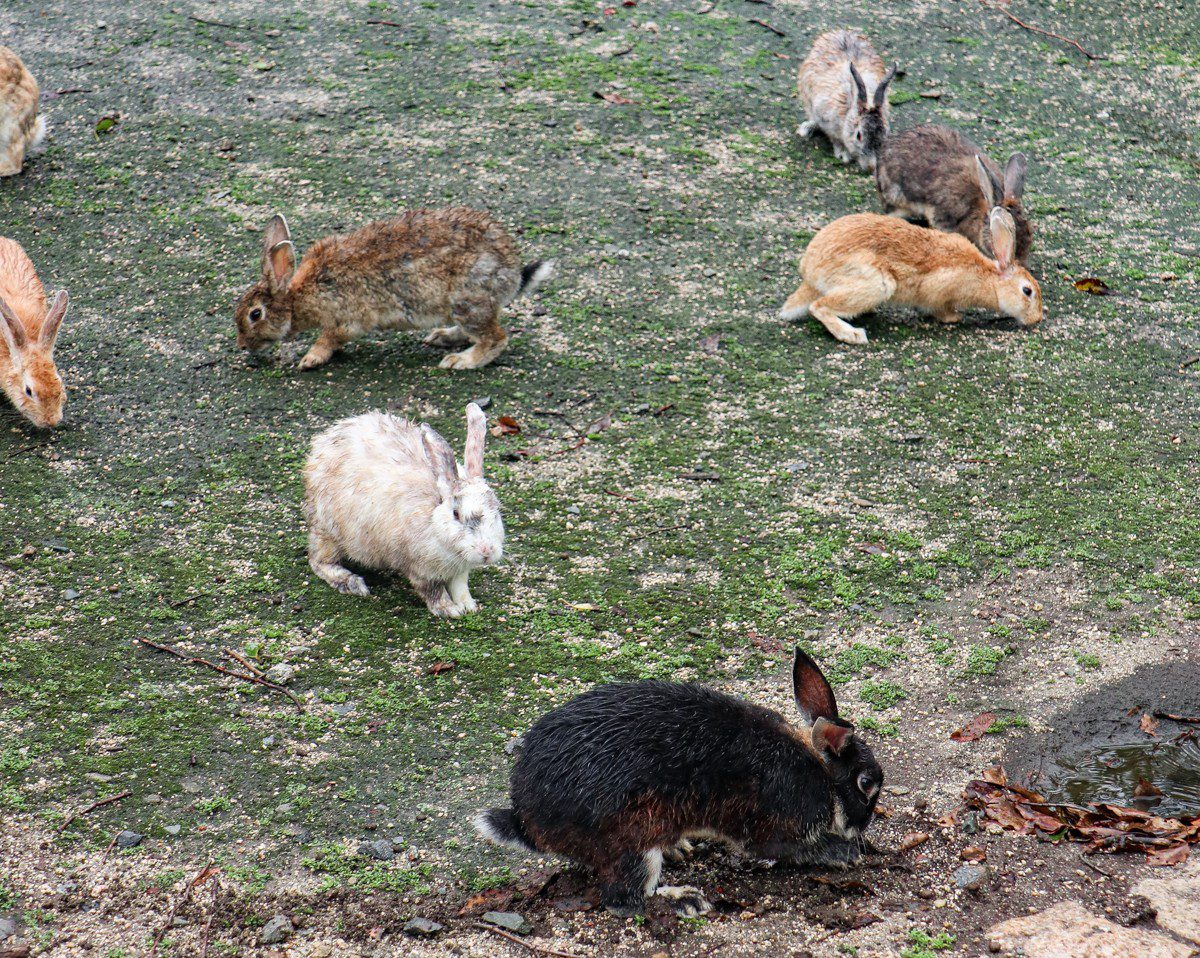 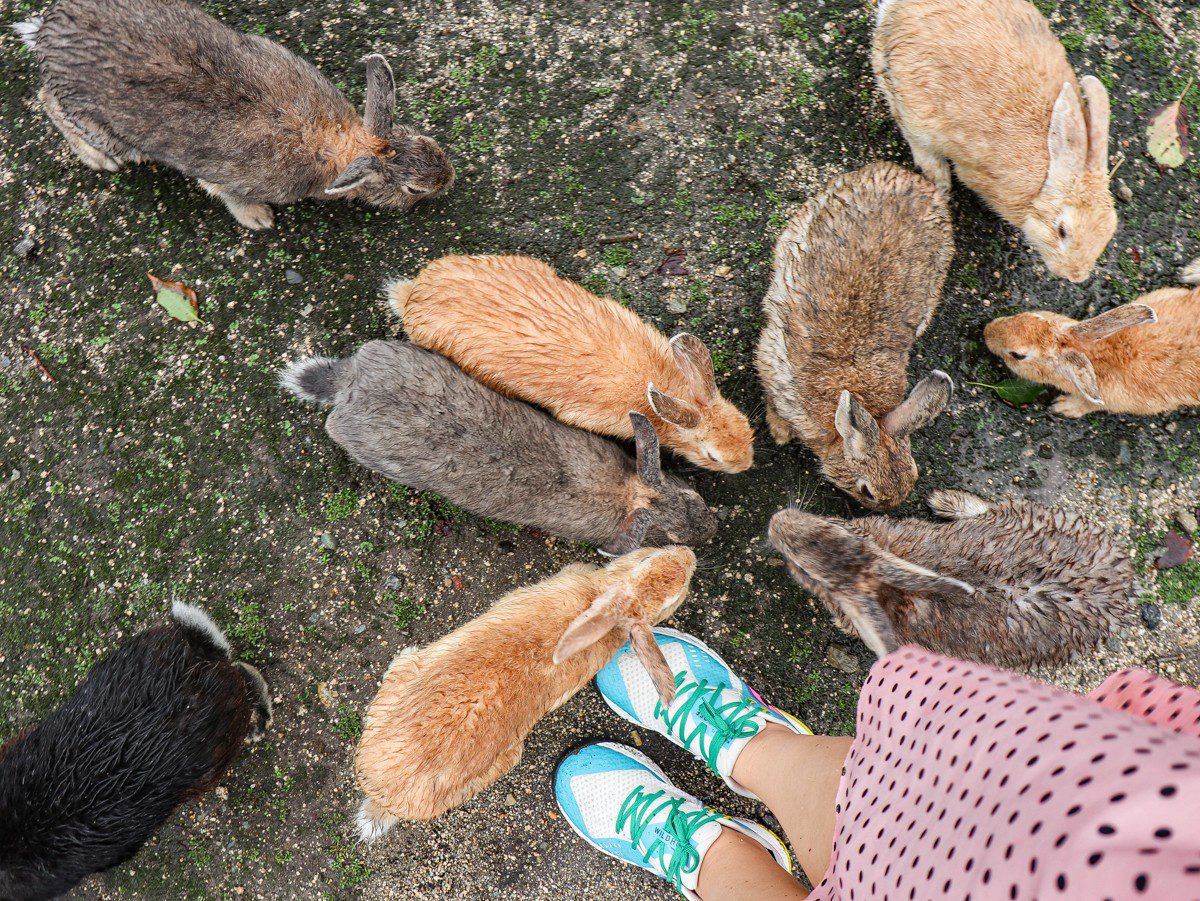 Another story tells about kids who released a few rabbits there in the 70s which usually is considered more viable. With the famous reproductive speed of rabbits, there is no surprise there are now hundreds of them on the island!

There are a few general rules to follow on Rabbit Island: 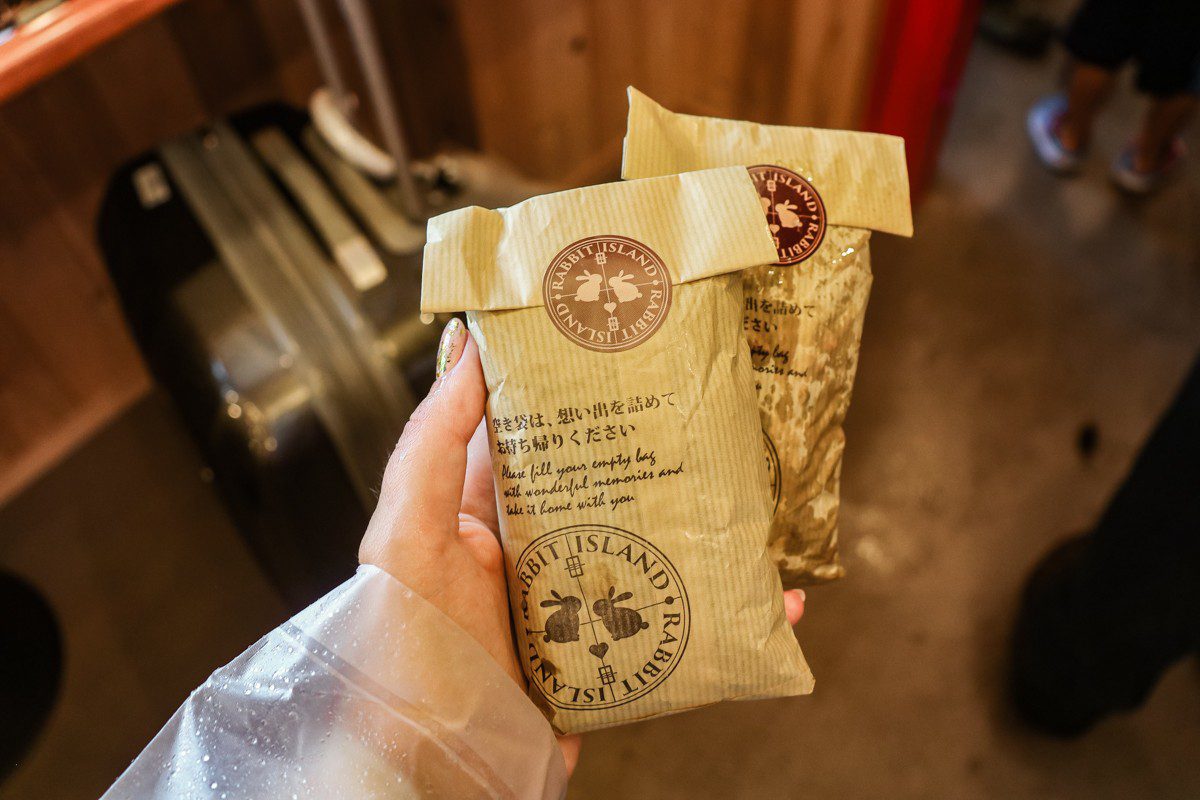 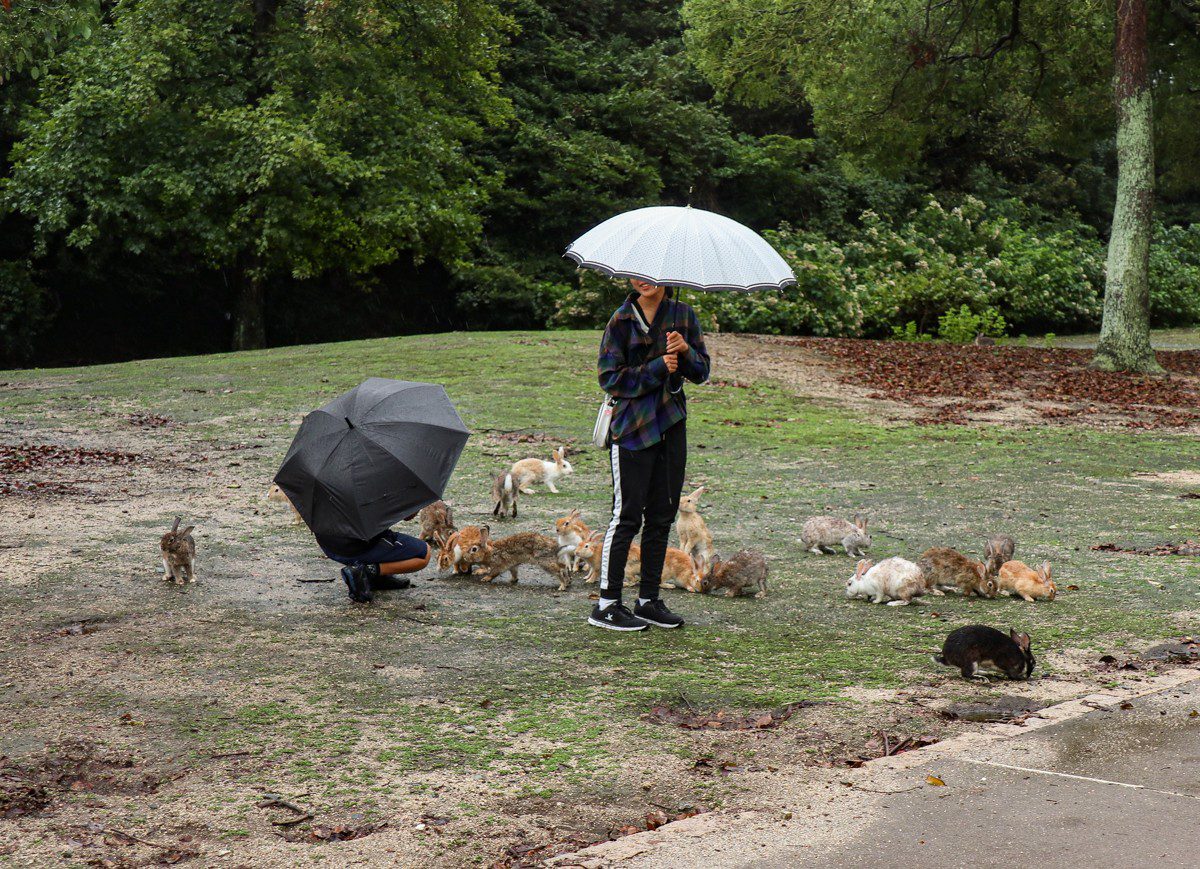 How to get to the Rabbit Island

We went to Okunoshima from Osaka by train from the Shin-Osaka station with one change of trains at Mihara station. The station you’re looking for is Tadanoumi JR Station – and the ferry is located a short walk away. Ferry ride takes about 15 minutes and there usually is one every 30 min or so – depending on time of the day and season. 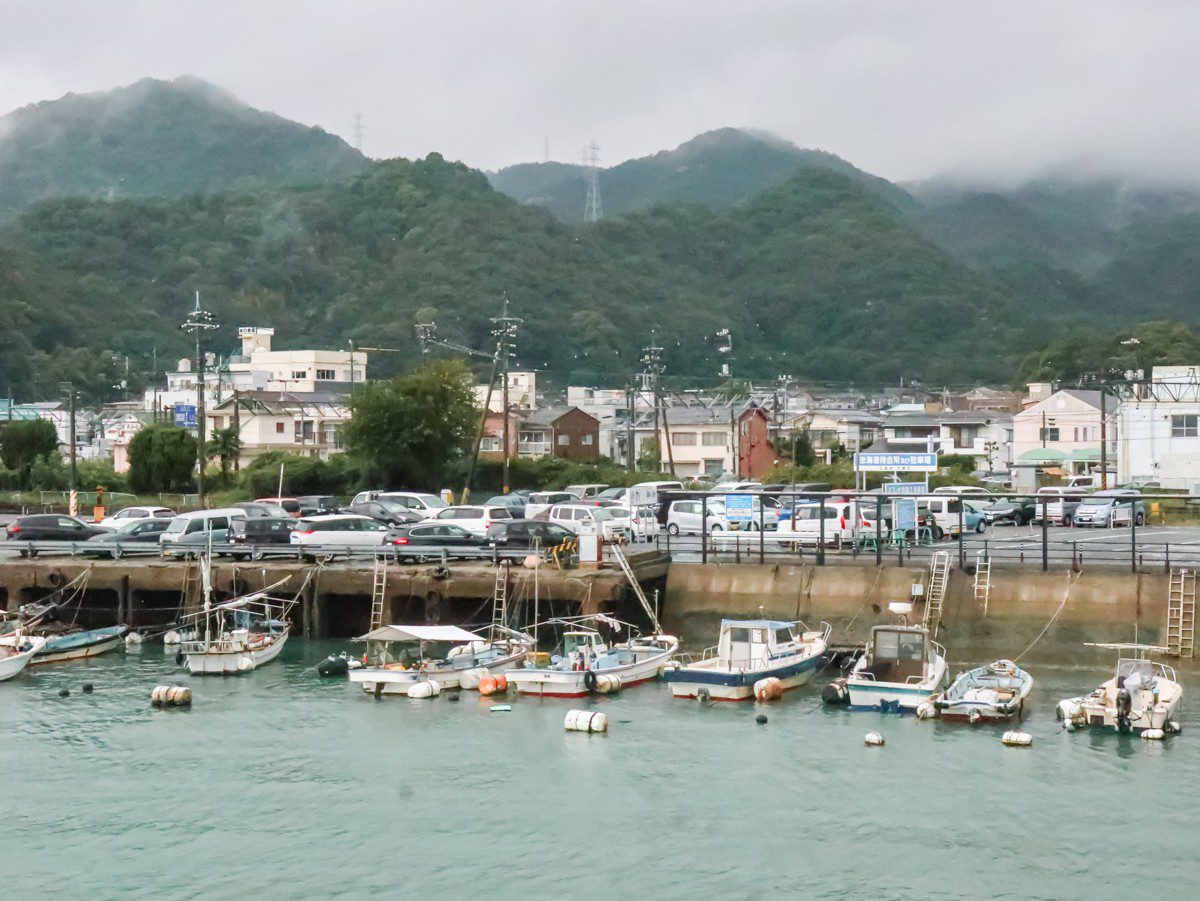 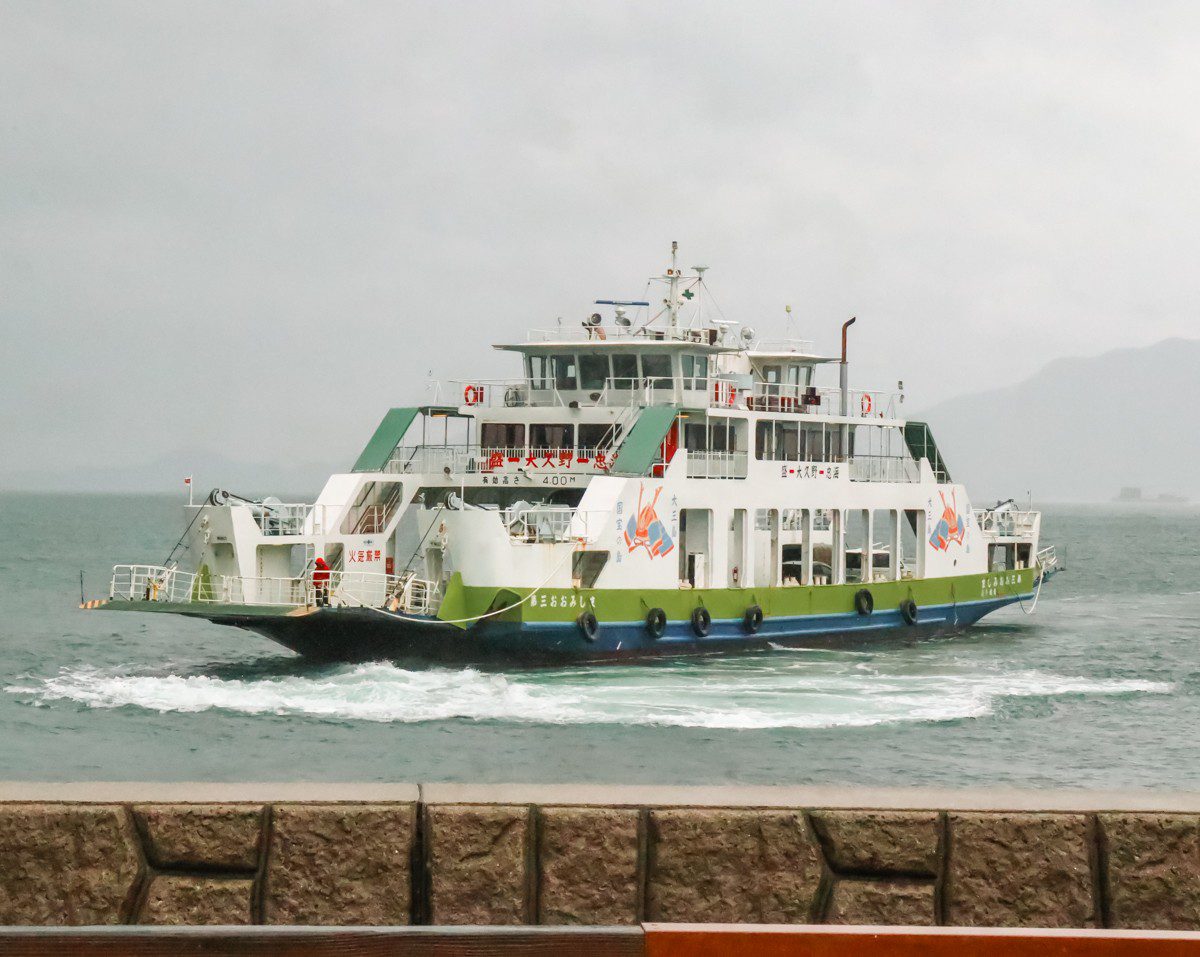 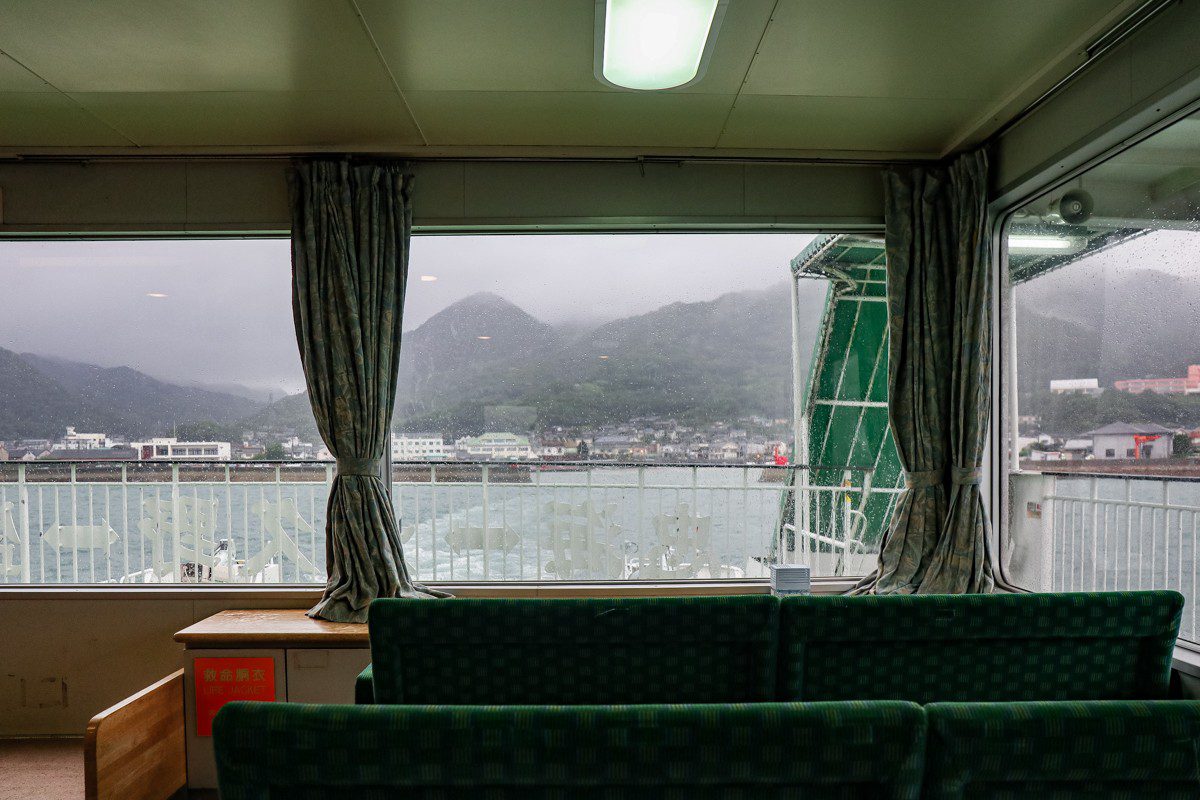 Before setting off, don’t forget to pay a visit to the Rabbit cafe and gift shop at the Tadanômi Port near the ferry station – at least for buying some rabbit food. Don’t forget that rabbits’ digestive system is not made for processing human food, don’t harm their health and buy the appropriate snack for bunnies on the Rabbit Island in advance! 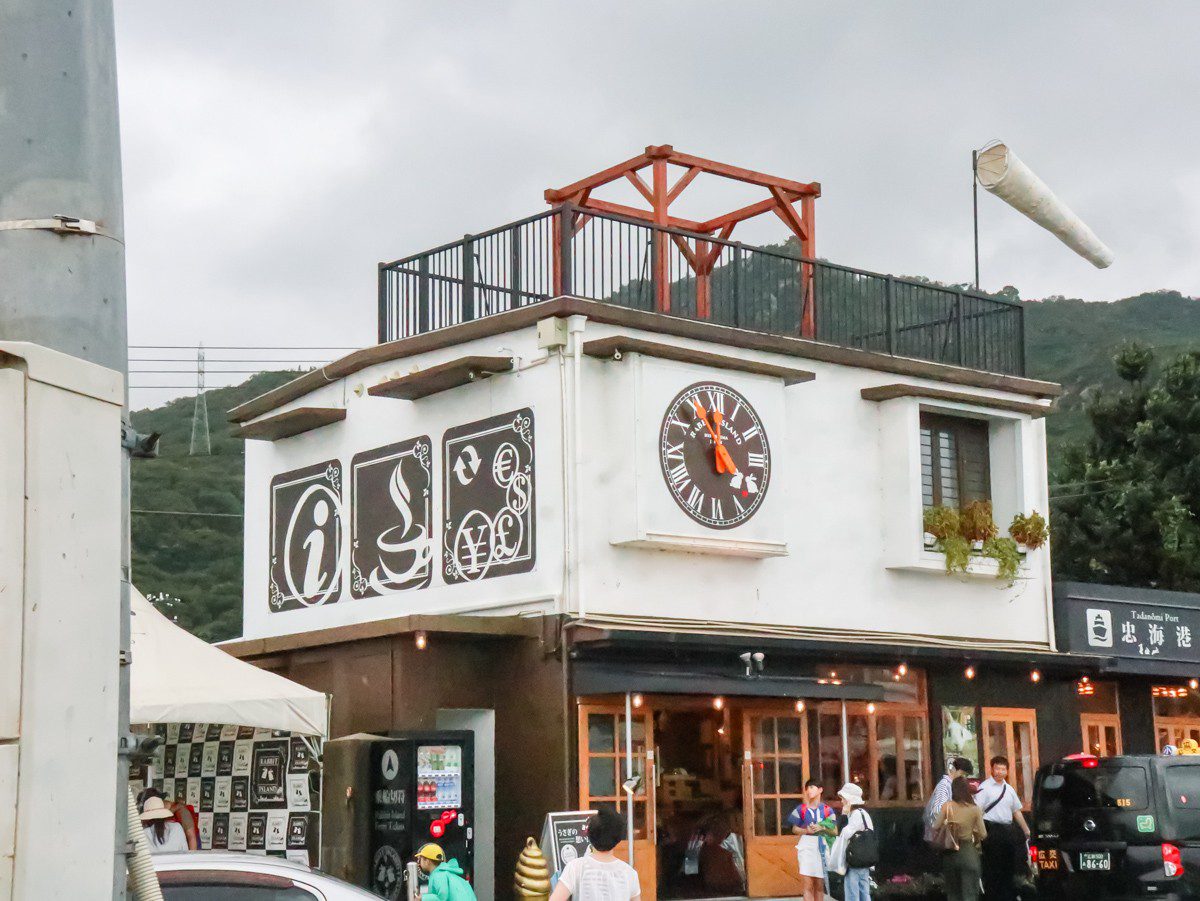 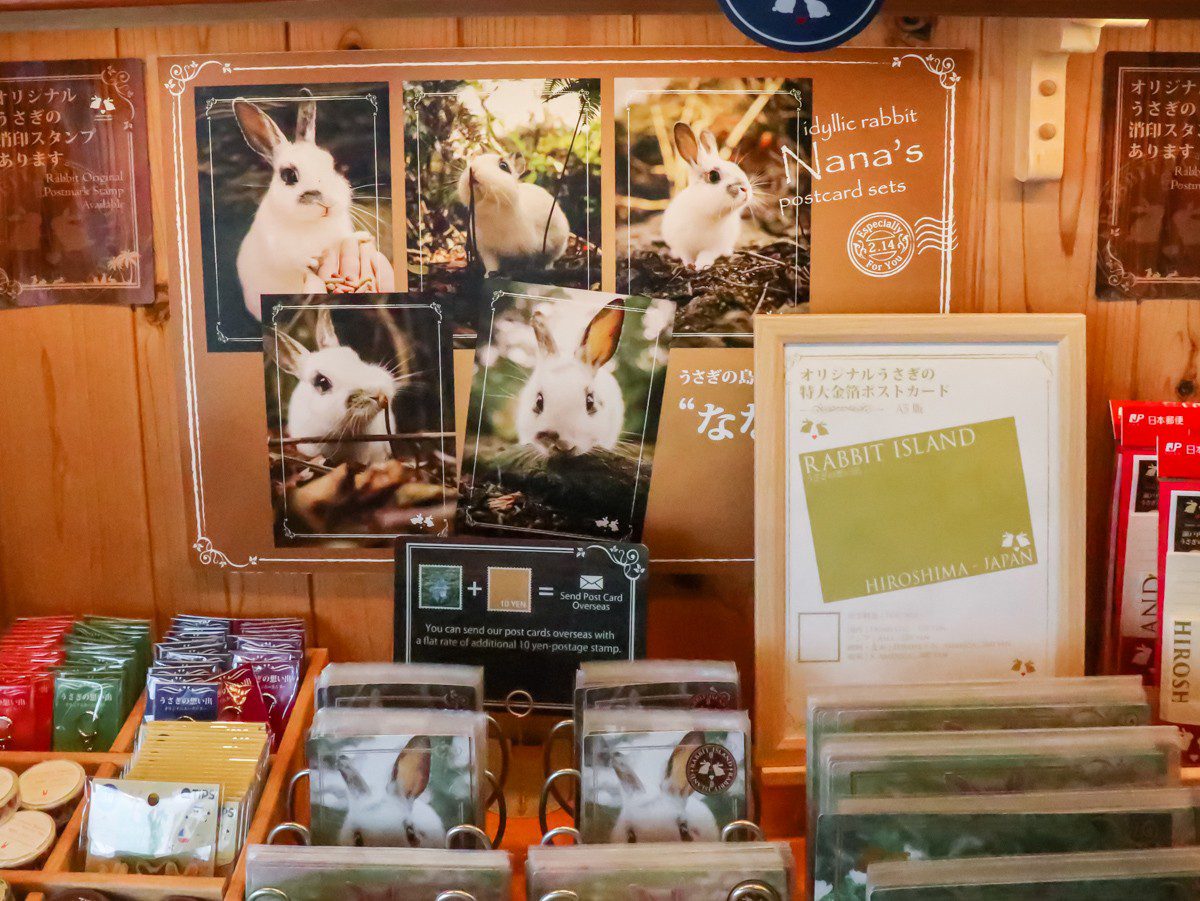 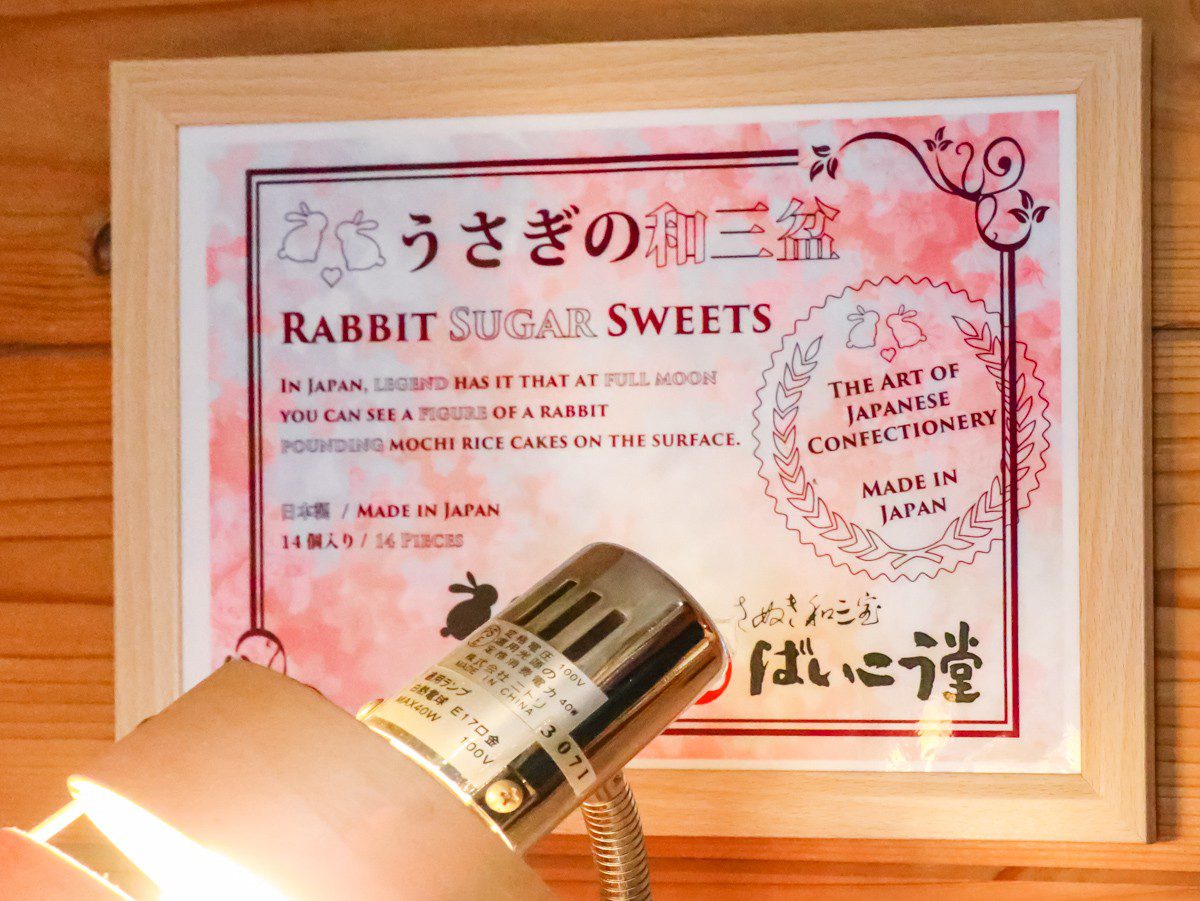 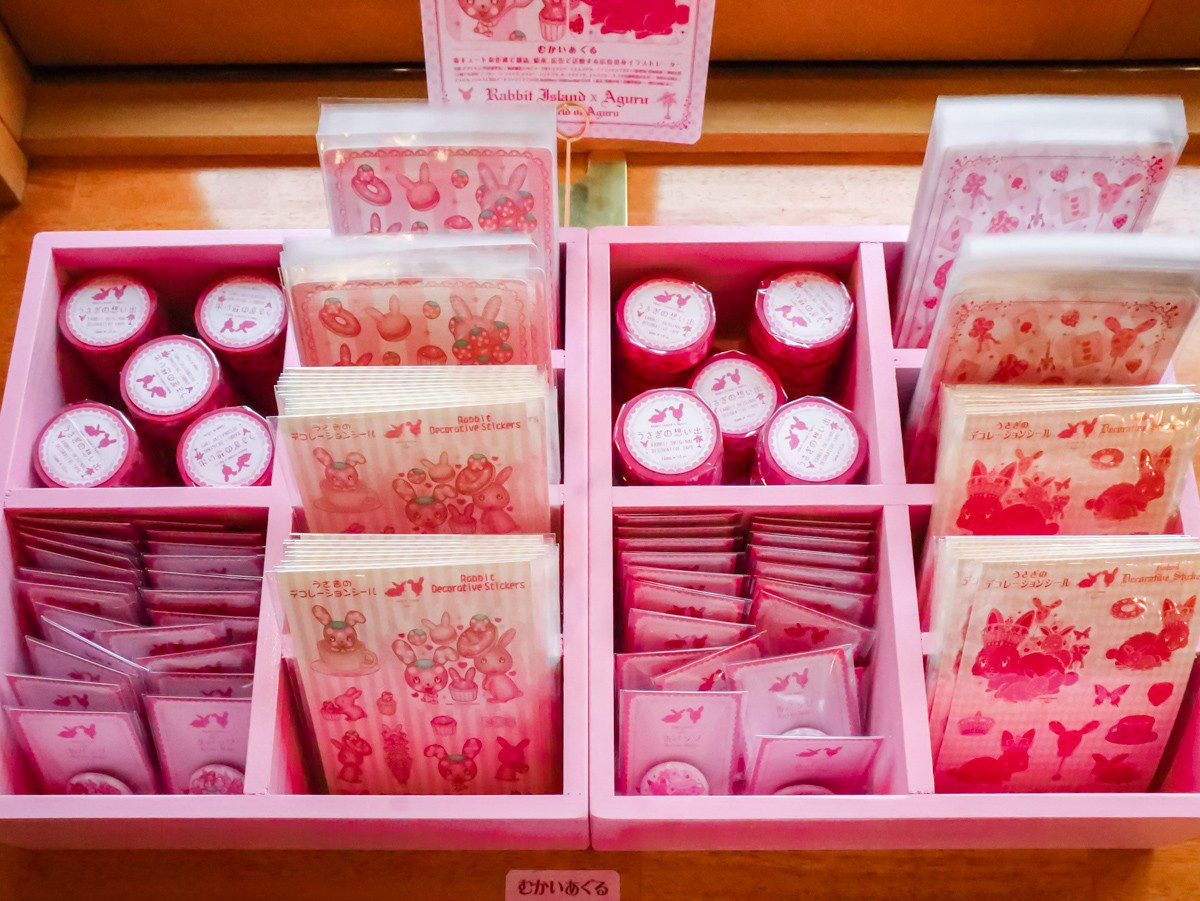 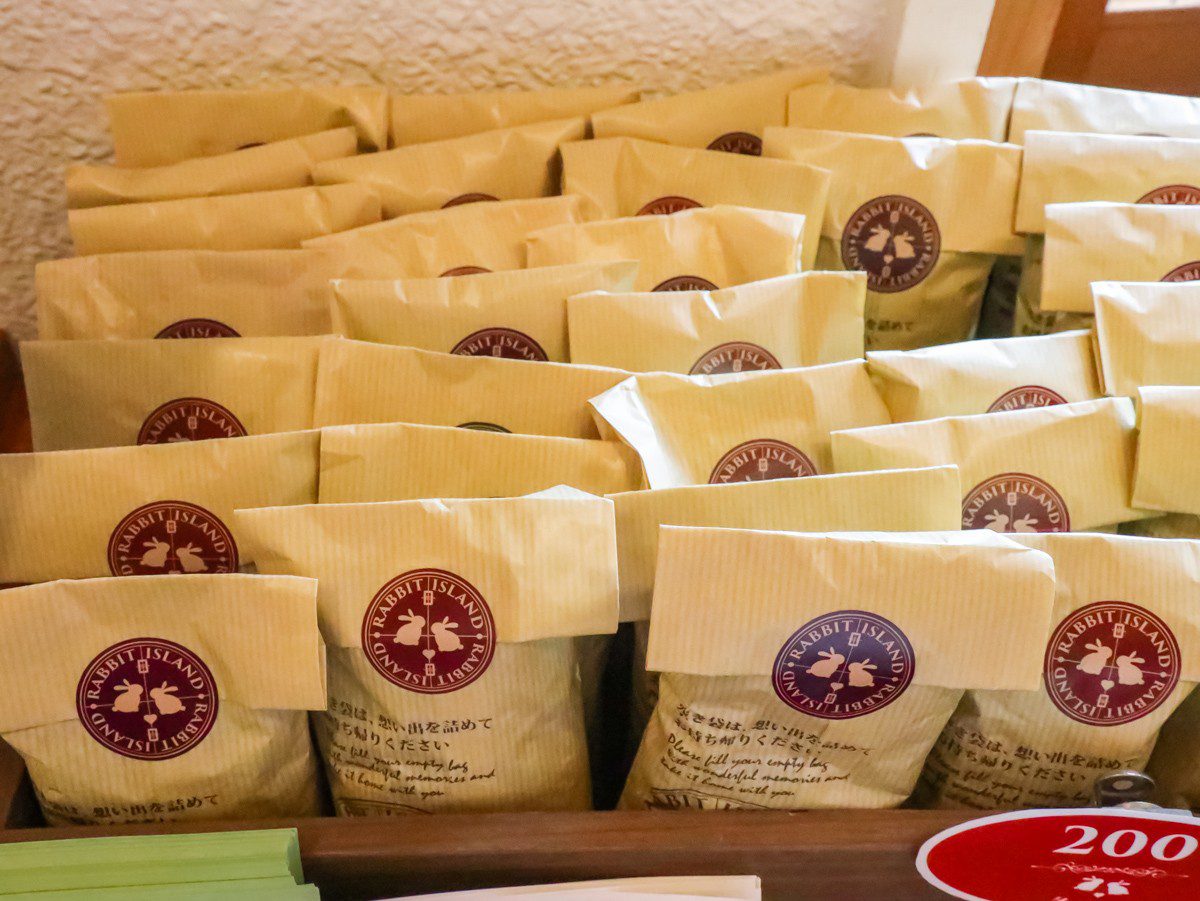 There are also lots of cute souvenirs and sweet snacks!

And, finally, just look how cute is the symbol of the Rabbit Island! 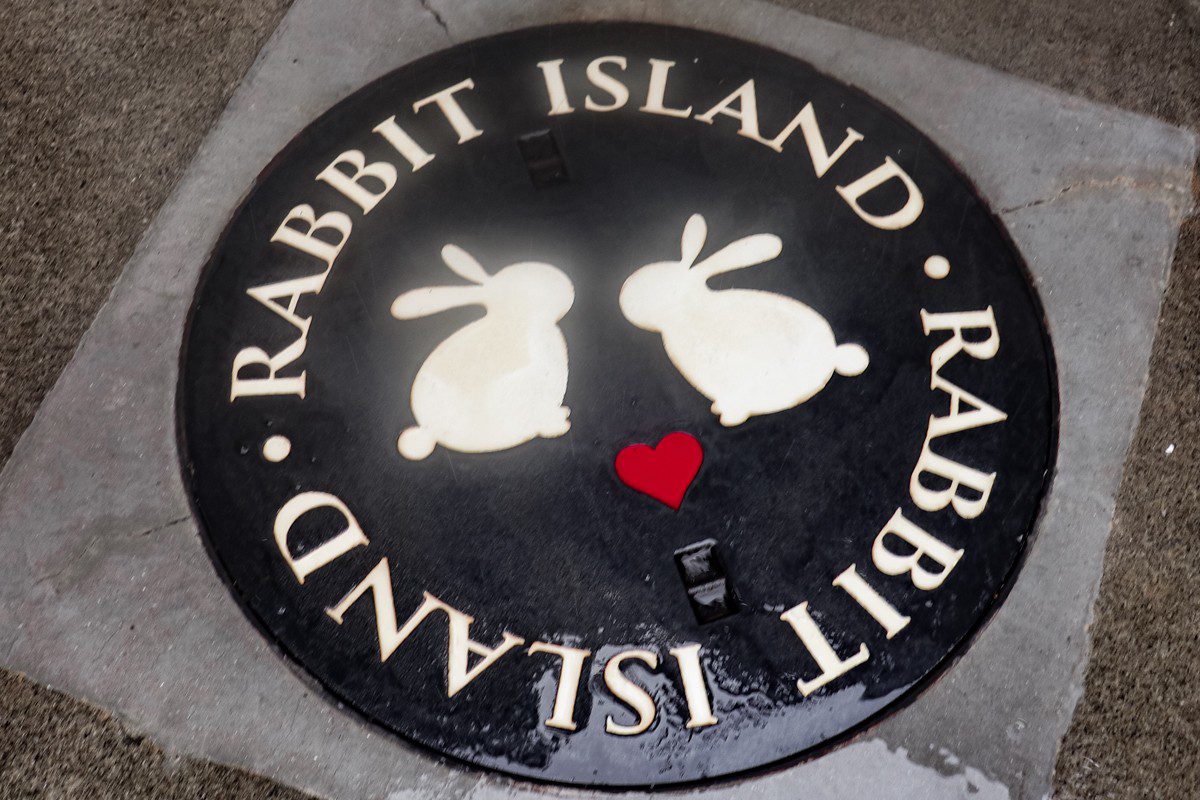 Learn Japanese With Me! P.1 | Purpurpurpur

This weather calls for something warm and nutritio