Planning a trip to Spain? Read about 5 most historically significant squares of Valencia!

The trip to Valencia was very important to me. I’ve never been to Spain before, but have always adored its culture: Lope de Vega, Miguel de Cervantes, Tirso de Molina, Joan Miró, Salvador Dali, Federico García Lorca, are all the sweet words to my ears, so I would’ve been bitterly disappointed had I not loved the country from the first sight! 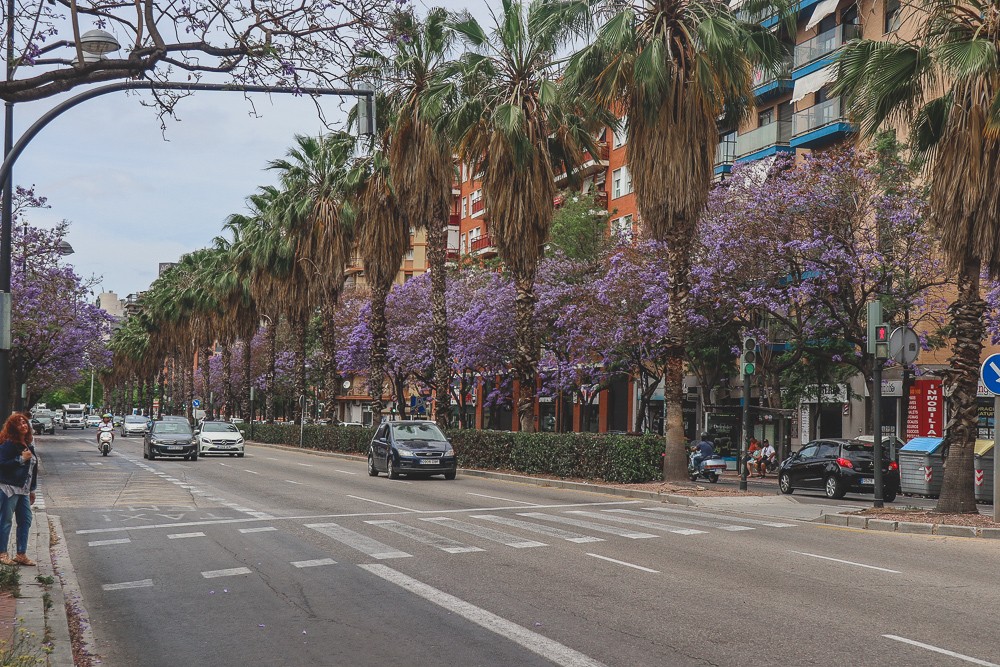 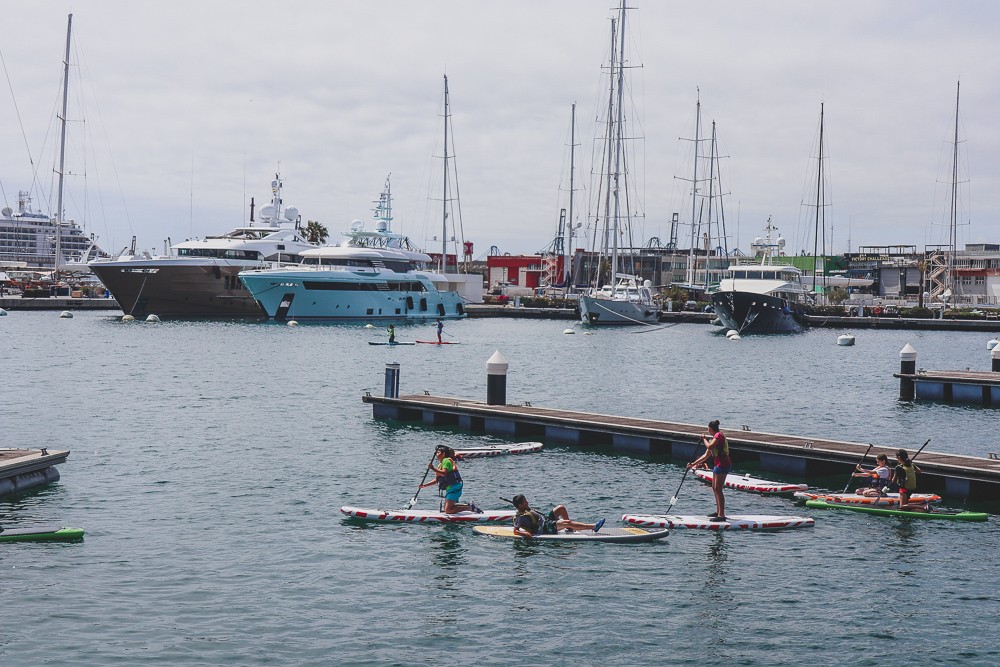 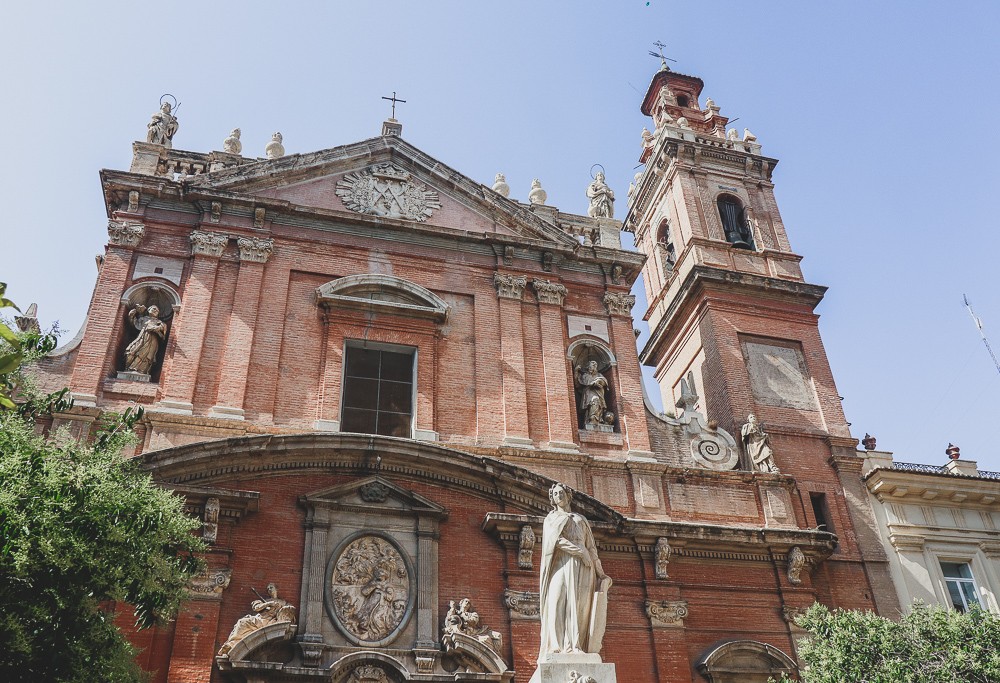 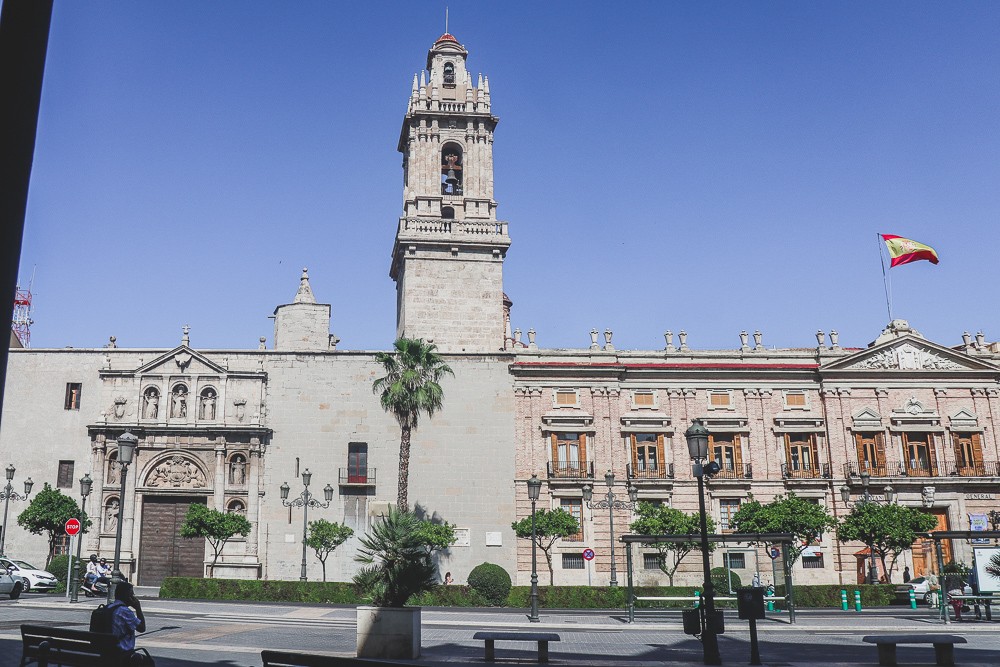 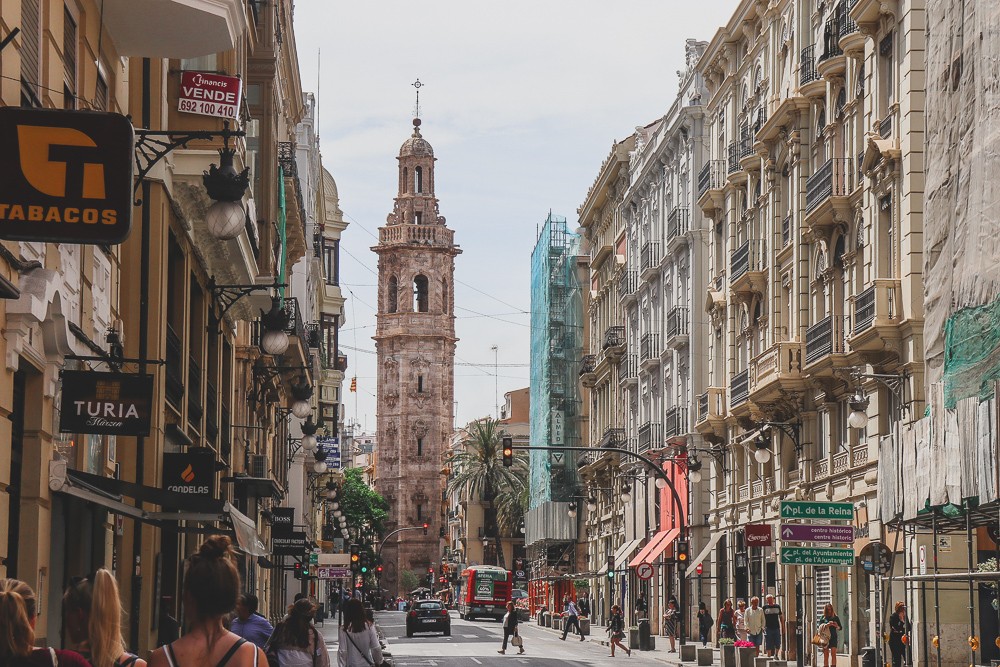 But thankfully, it never happened, and I fell in love with Valencia, with its orange trees and sunny streets! It’s both modern and historic city which has many things to offer to any taste, from archaeological lovers to beach goers. In my first blog I talked about top-10 places to see, and now I’m sharing 5 most beautiful and historically important squares of Valencia and about the hotel where we stayed! Scroll down!

Interesting: while in Valencia, you can frequently see the signs written in close but not similar manner. Those are Spanish and Valencian languages.

The Queen’s Square, or Plaza de la Reina, is one of the most visited places in Valencia for good reason. Not only it is the very heart of the historical city, but the Cathedral with the Holy Grail stands here.

There are also many restaurants and souvenir shops – one of the kiosks even sells an ice cream with the favour of gazpacho! 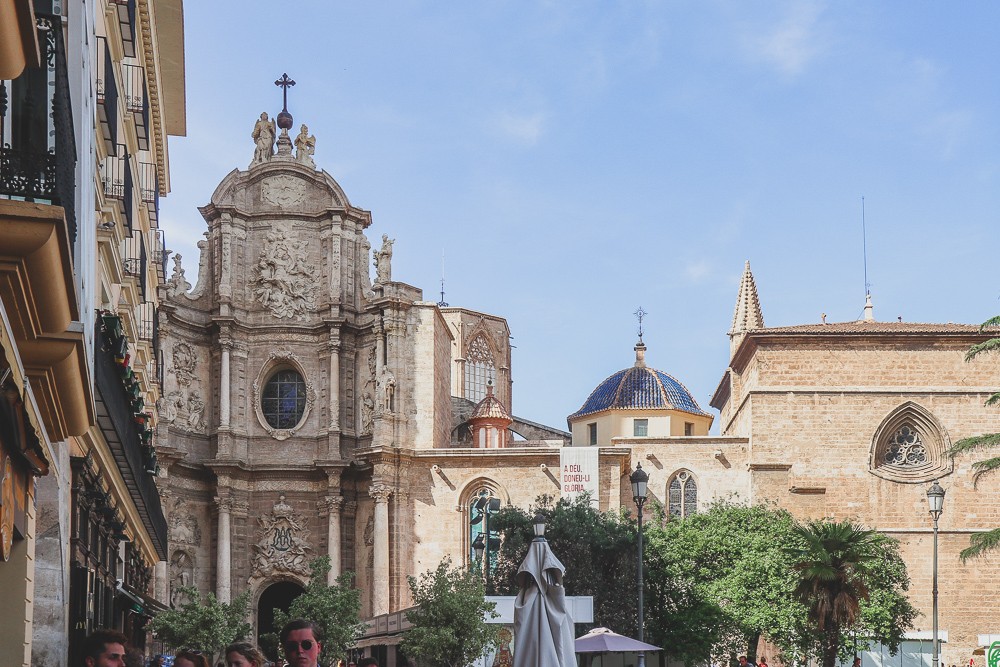 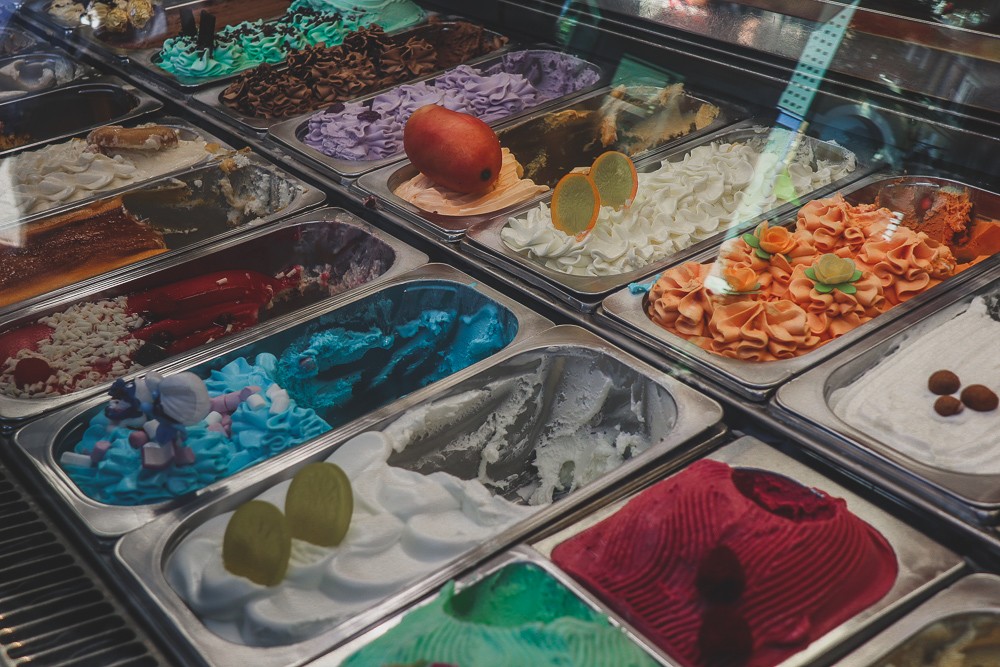 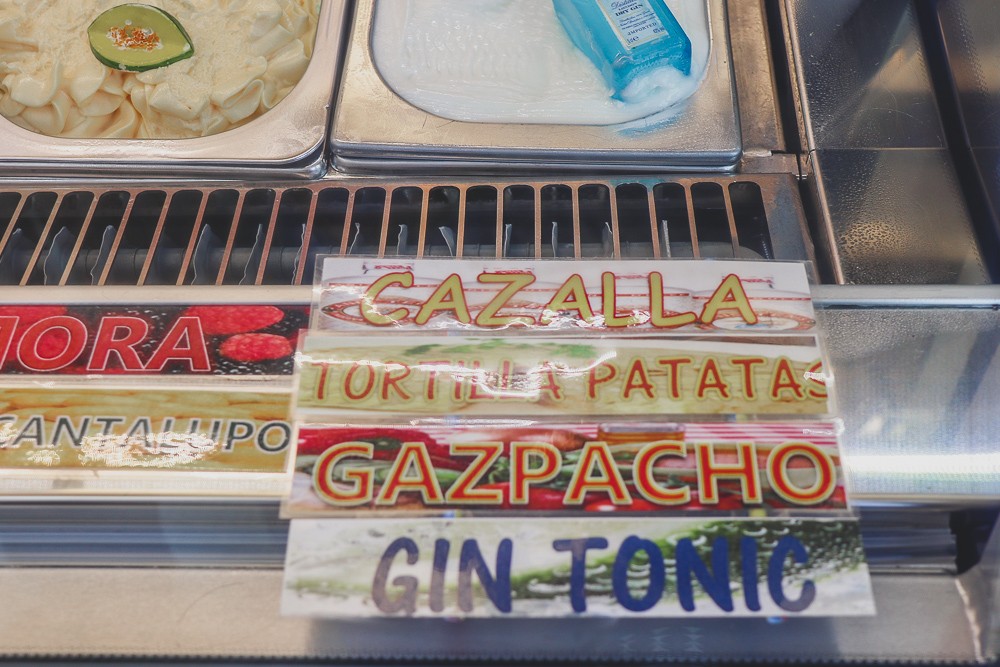 Also Horchateria de Santa Catalina, one of the oldest and most visited cafes in Valencia where you can try horchata, a drink made out of tiger nuts.

Second historical square that you must visit. It’s located right on the other side of the Cathedral – where its la Puerta de los Apóstoles is. It also has the 17th century La Basilica de la Virgen de los Desamparados (Basilica Of Our Lady Of The Forsaken) and the 14th century Il Palazzo de la Generalitat (the Palace of the Generalitat) framing it on the other sides. When you get there, no way you can miss a huge fountain la Fuente del Turia, a creation of Silvestre Edeta. It represents local river Turia incarnated by Neptune. 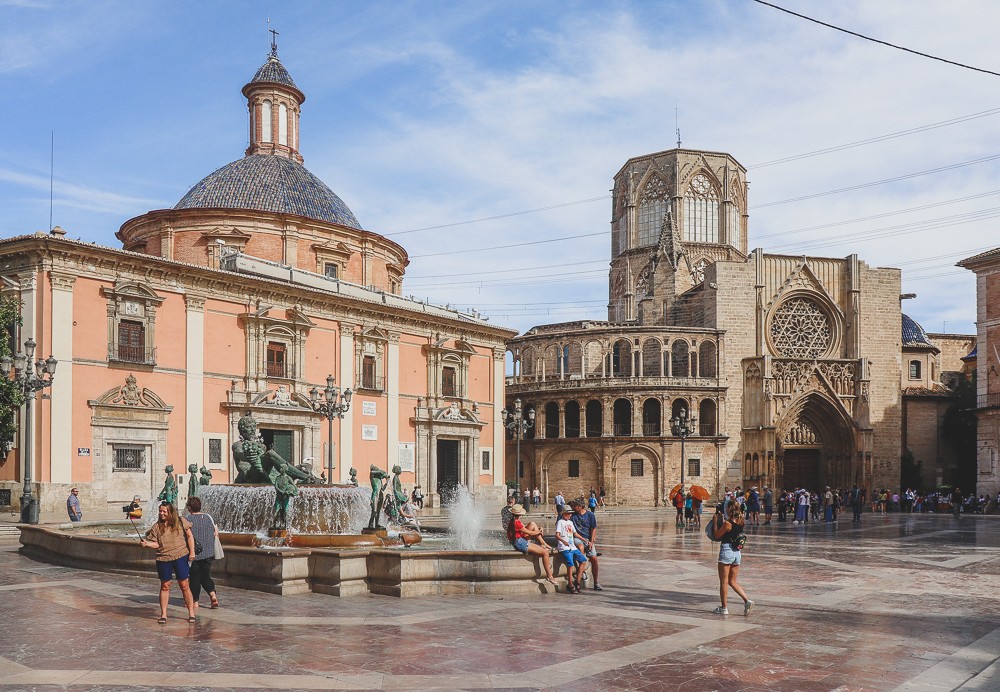 We loved sitting there with a view over the Cathedral in one of the cafes with open terraces on the square, sipping Agua de Valencia and eating some croquettes.

Circular and tiny Plaza Redonda is another must-see with a mid-19th century fountain at the centre and due to its shape. 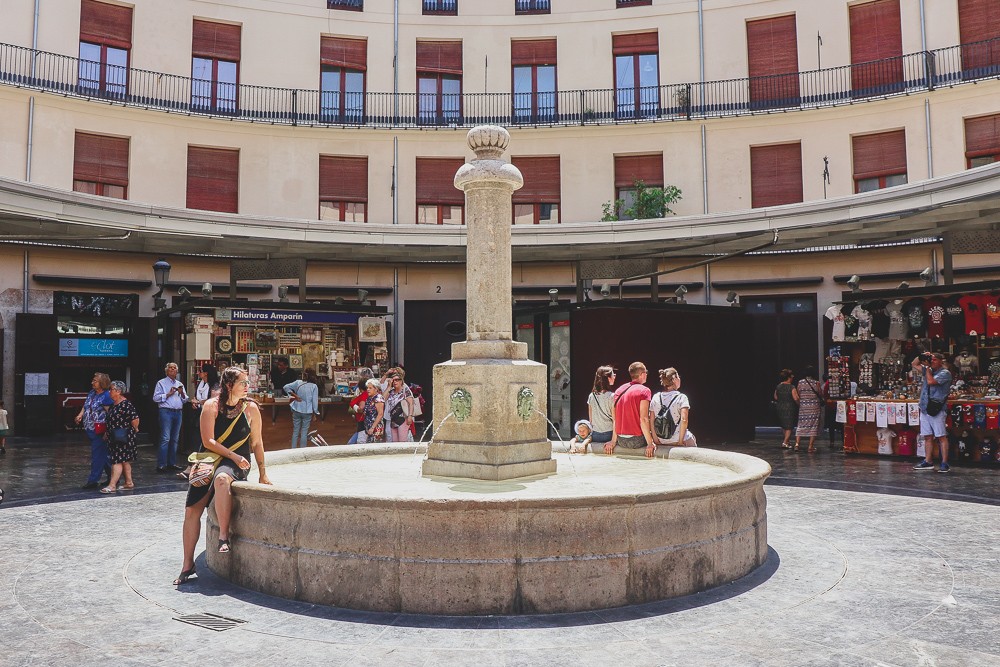 Sadly, the limited space is restricted even more by kiosks with souvenirs and other touristy stuff. Nevertheless, it’s still lovely – and don’t forget to check the narrowest building in Europe located on the adjacent Lope de Vega Square.

First of all: I’m again bullfighting activities. Nevertheless, I feel that Plaza de Toros is important square for Valencia and Spain too because bullfights such as corrida (how wicked they would not have been) occupy an impressive part in the history of the country. Thus, after some hesitation, I decided to include it to my blog. 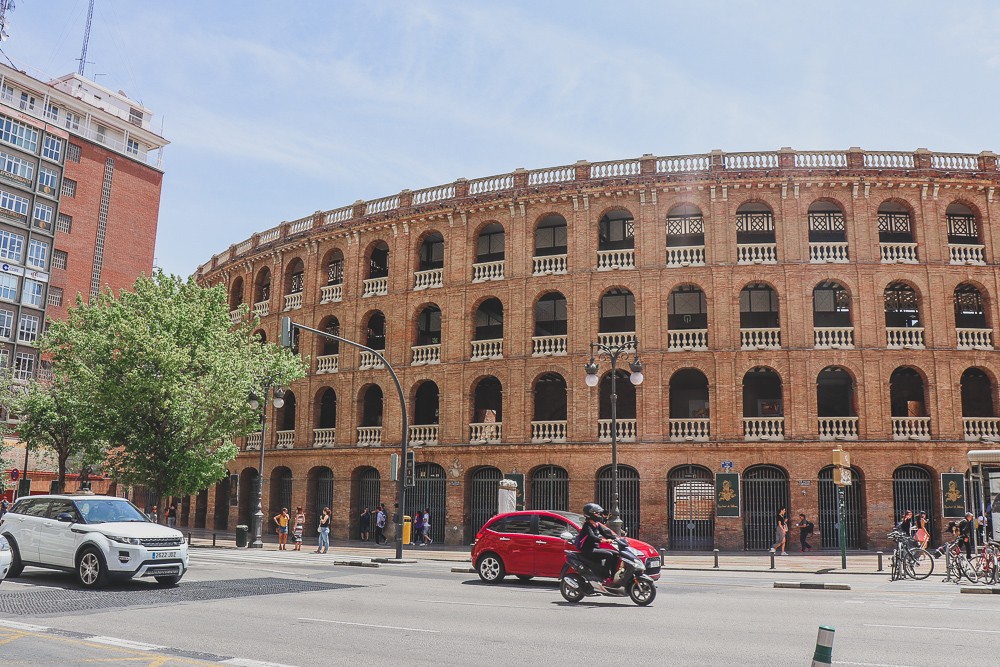 An actual bullring resembling a Roman amphitheater is located there – I didn’t visit it but it looked huge and impressive from the outside. This 19th century neoclassical architectural landmark has a small thematic museum near it.

Another point of interest is an incredible art nouveau building of the North Station – Estación del Norte. 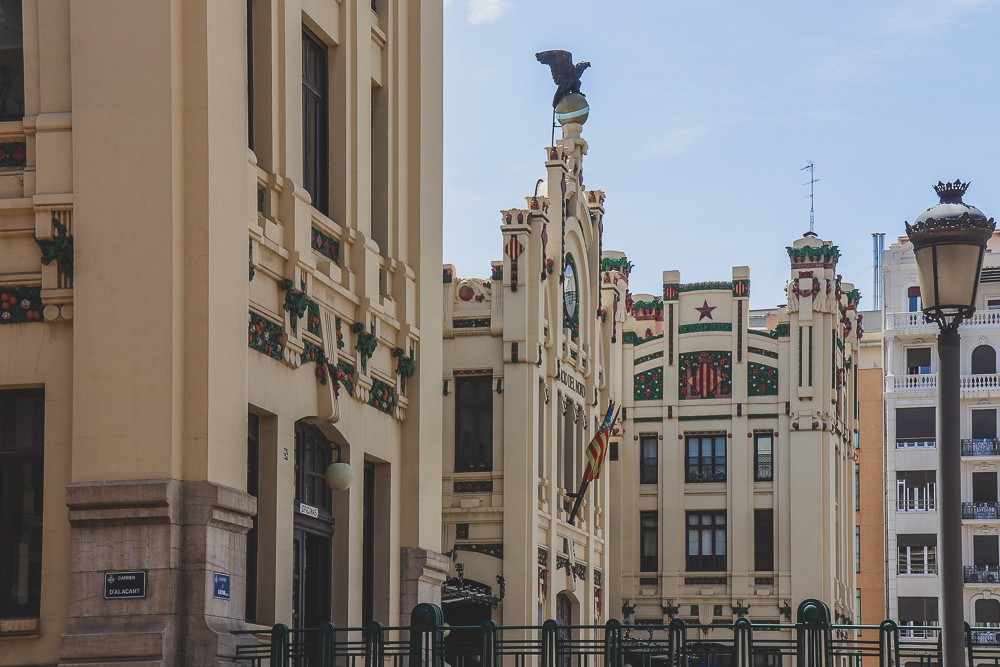 Finally, the main civil square of Valencia is Plaza del Ayuntamiento, or Town Hall Square, with a gorgeous fountain in the middle. It’s modern landscape dates back to 1931. The flower stalls that are located on Plaza del Ayuntamiento are quite traditional: they belong to this place for decades. 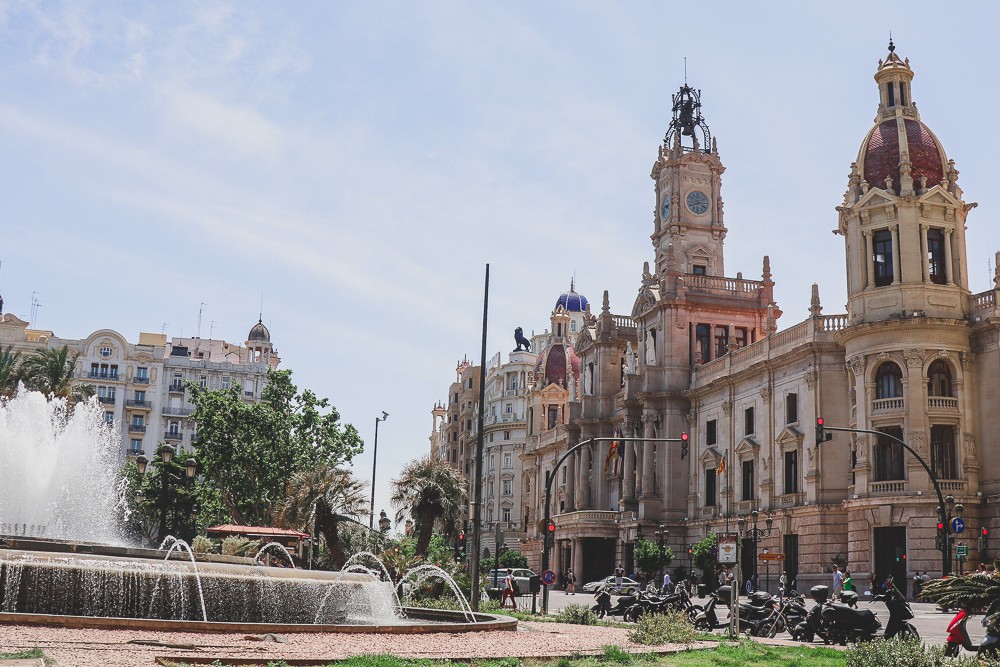 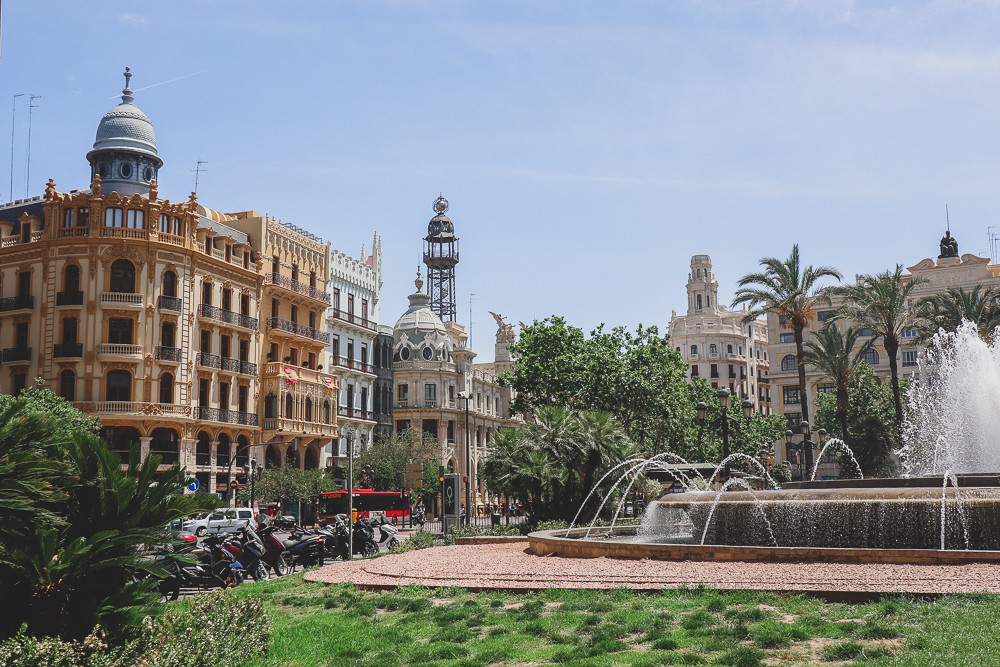 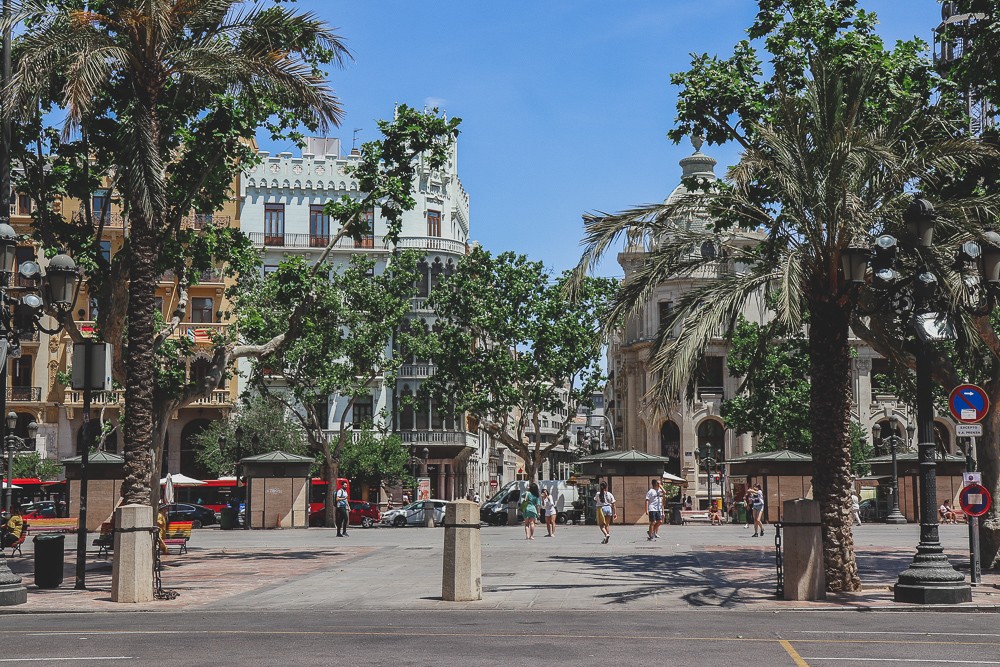 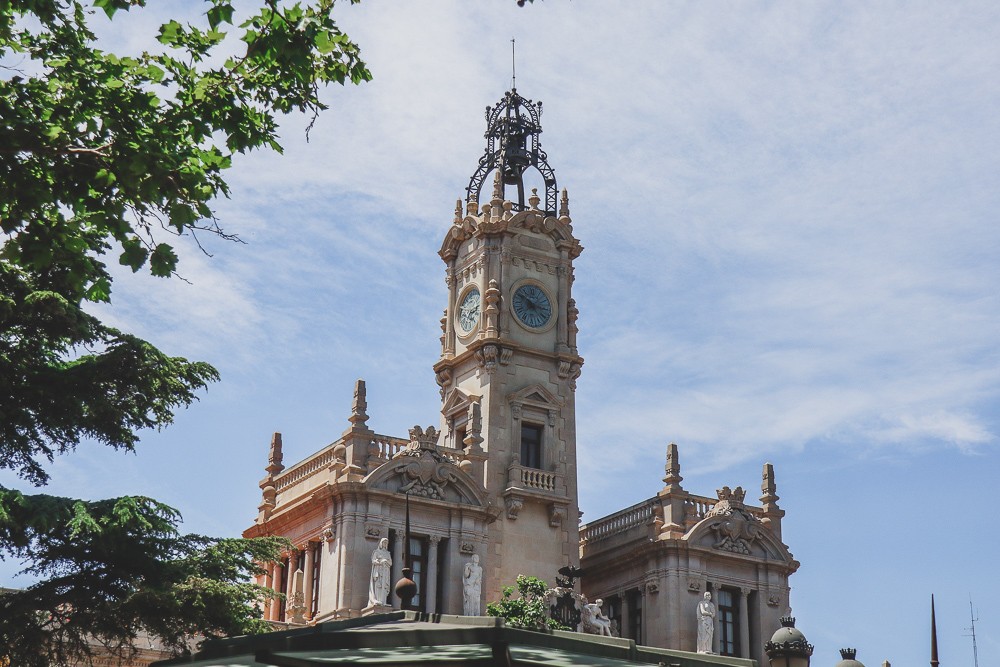 Where did we stay in Valencia?

We chose to stay in a nice hotel called The Caro. It’s located really central, the breakfast was delicious (think of crepes with béchamel and jamón!), and the room service was very good too.

The only thing I was a bit disappointed about is their pool – I really thought it’d be bigger:) 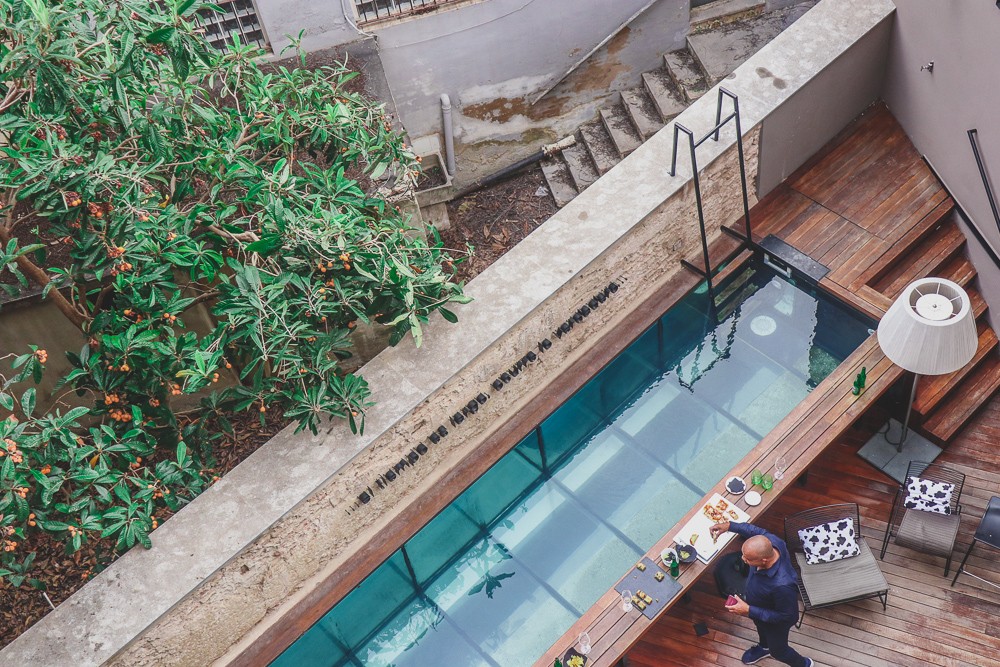 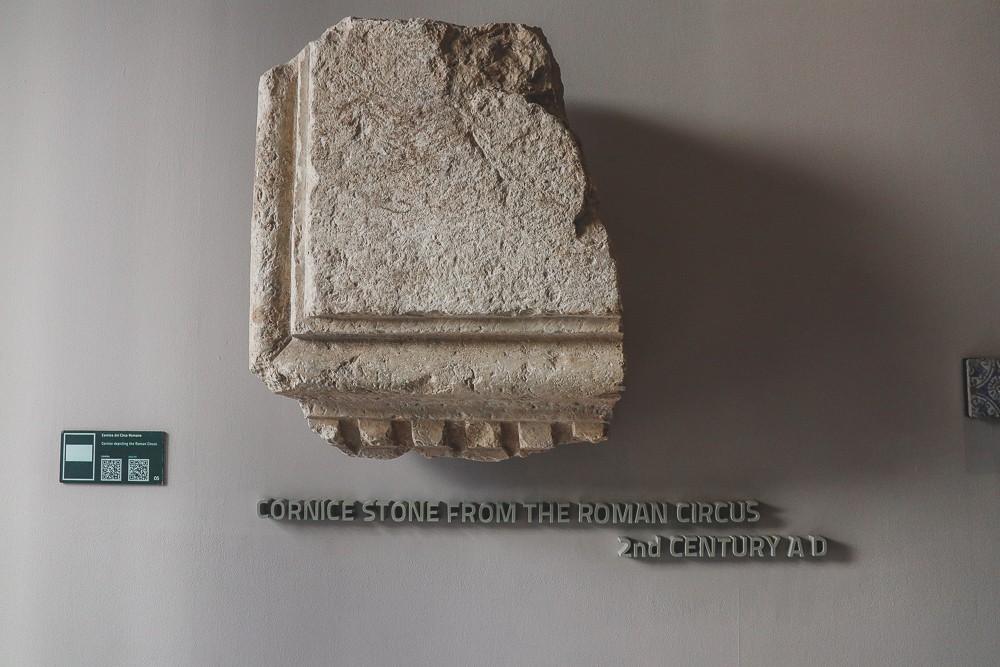 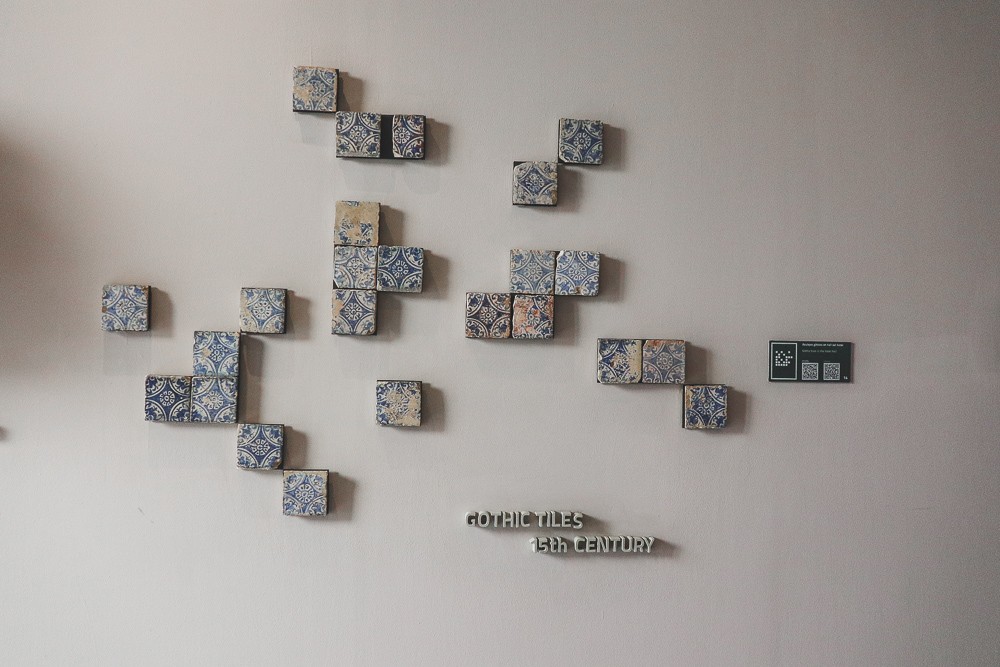