If you ask me about the most colourful place I’ve ever been it’ll definitely be Burano, a tiny island a short ride from Venice with a population of just a few thousand people. Some say you need to spend just an hour there, others think that you can spend a day there. It’s up to you to decide, but the place is an absolute gem in the crown of the islands of La Serenissima! 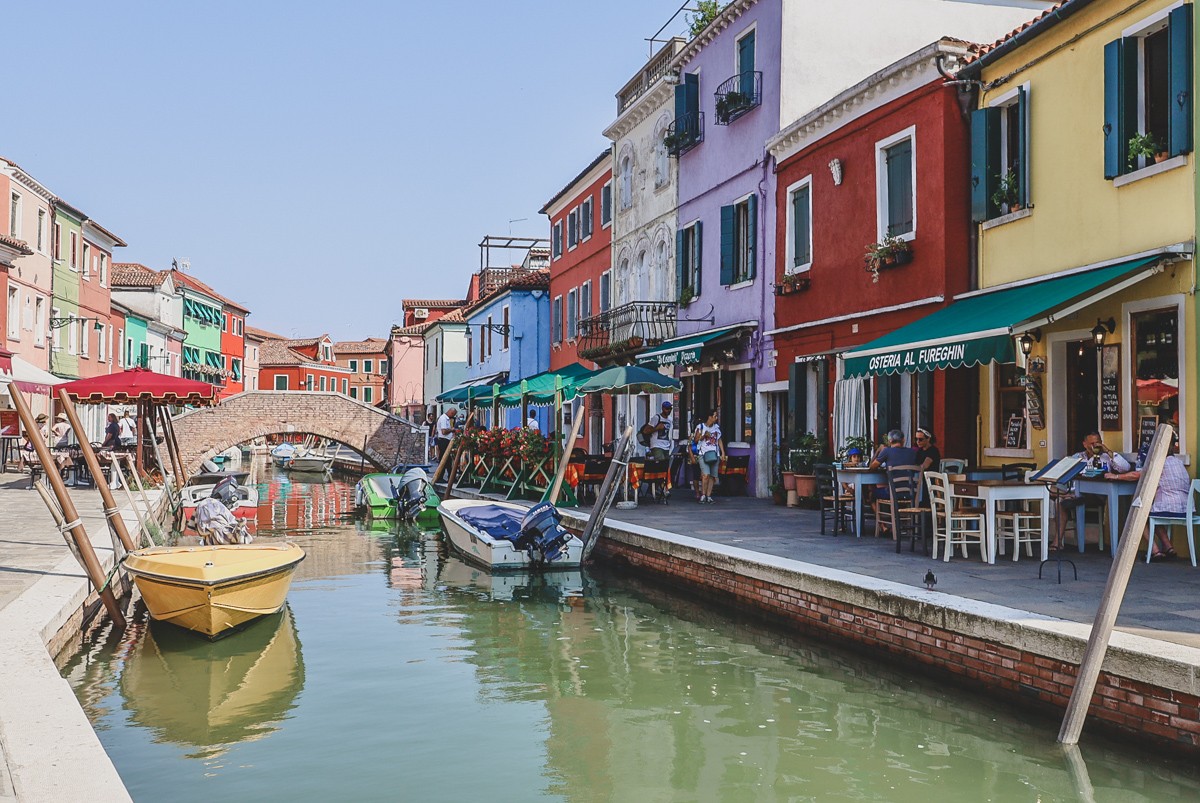 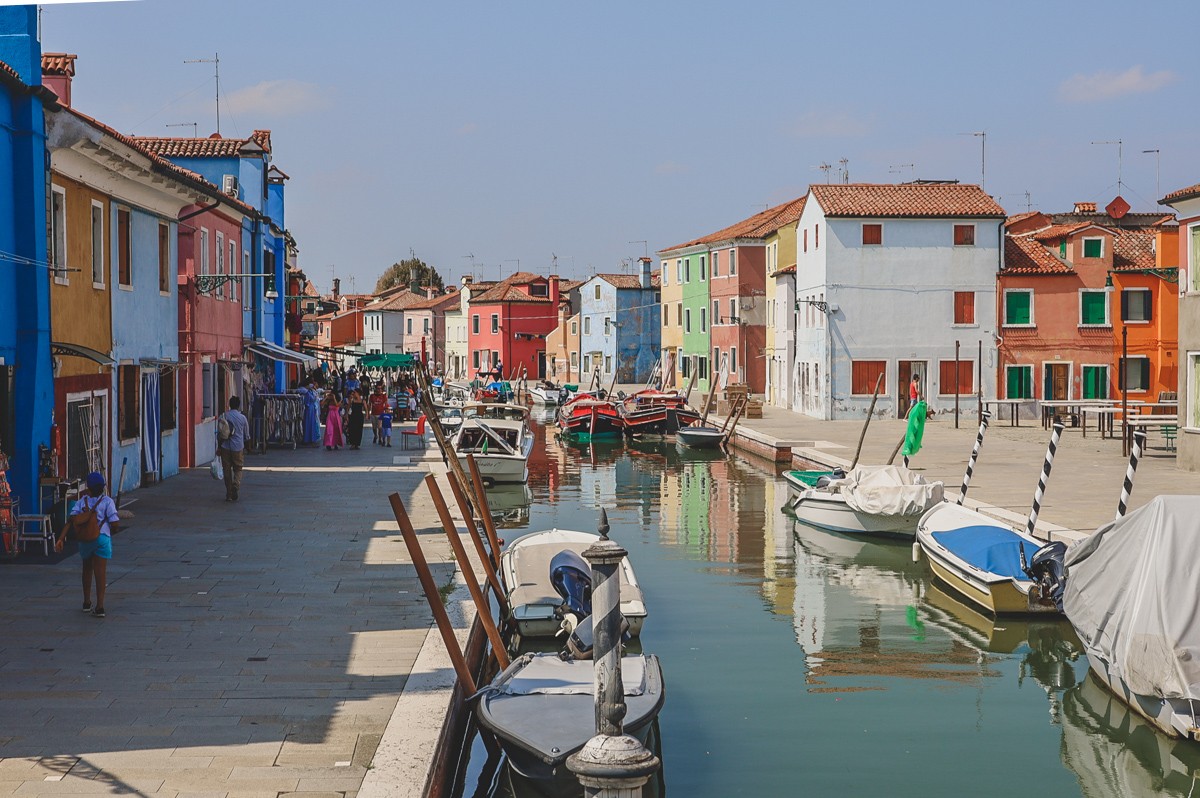 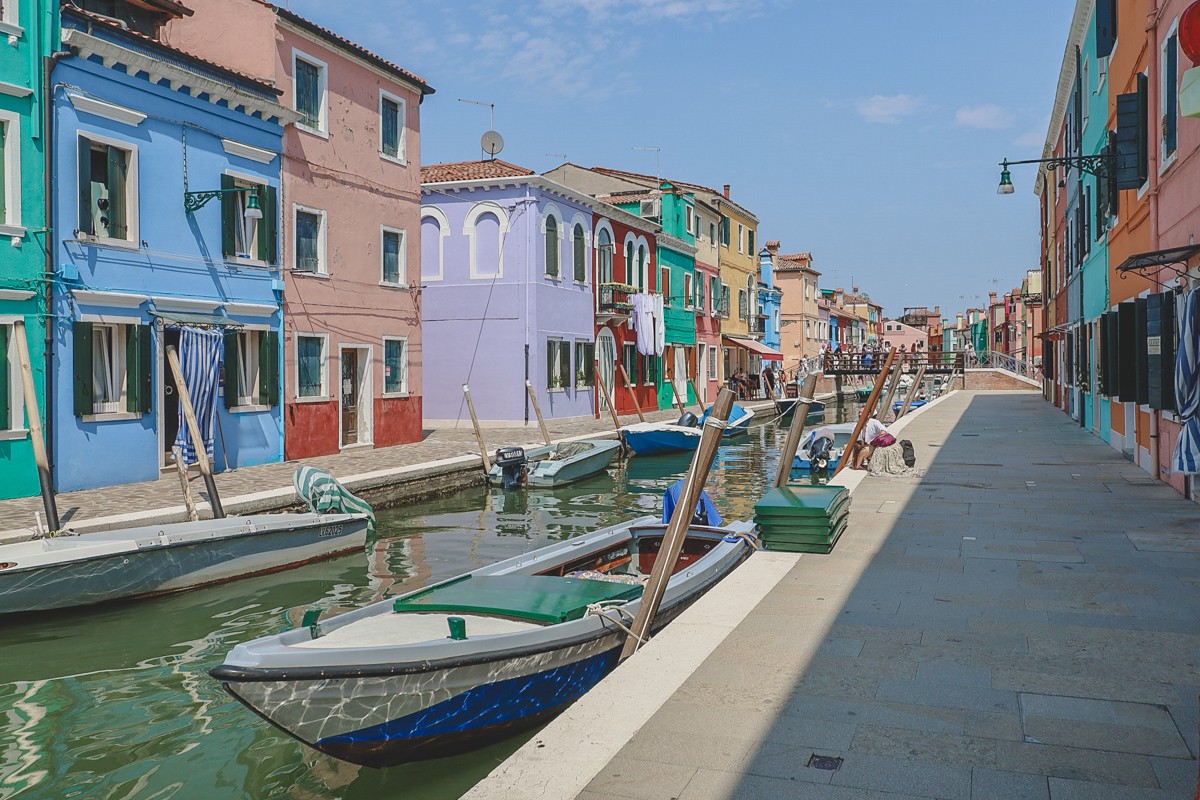 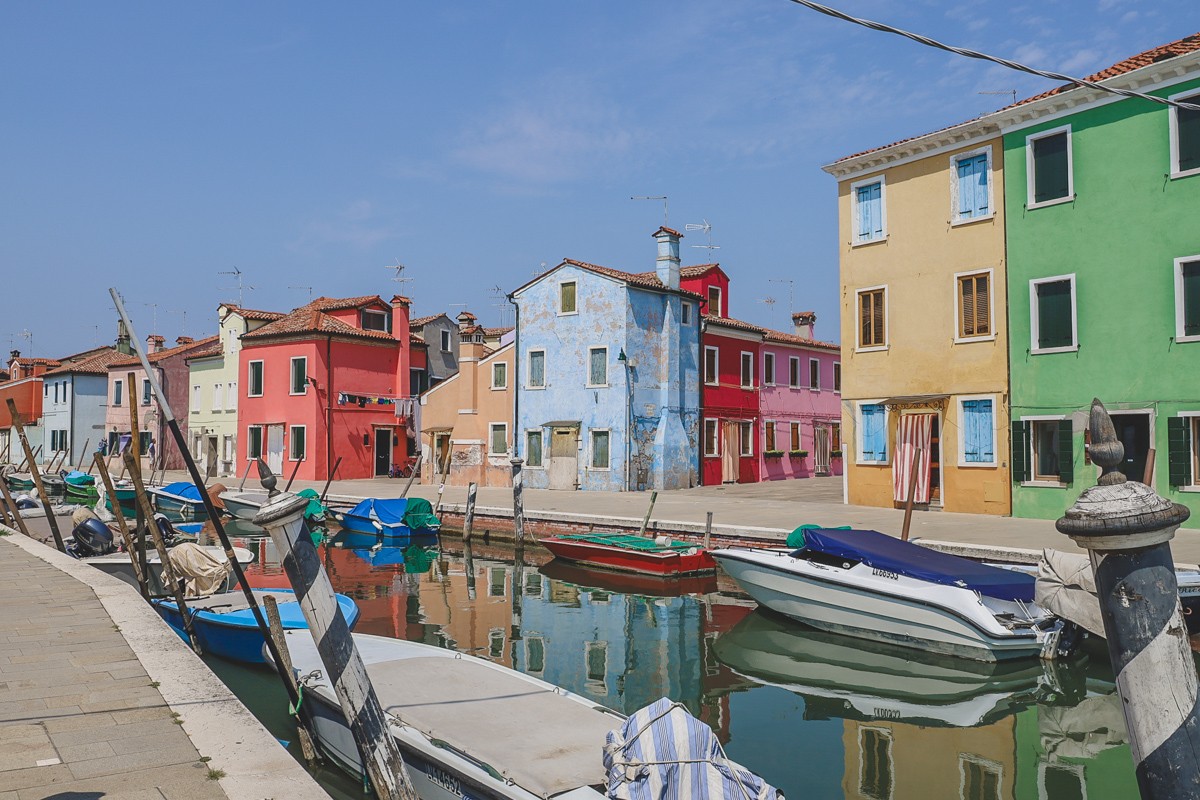 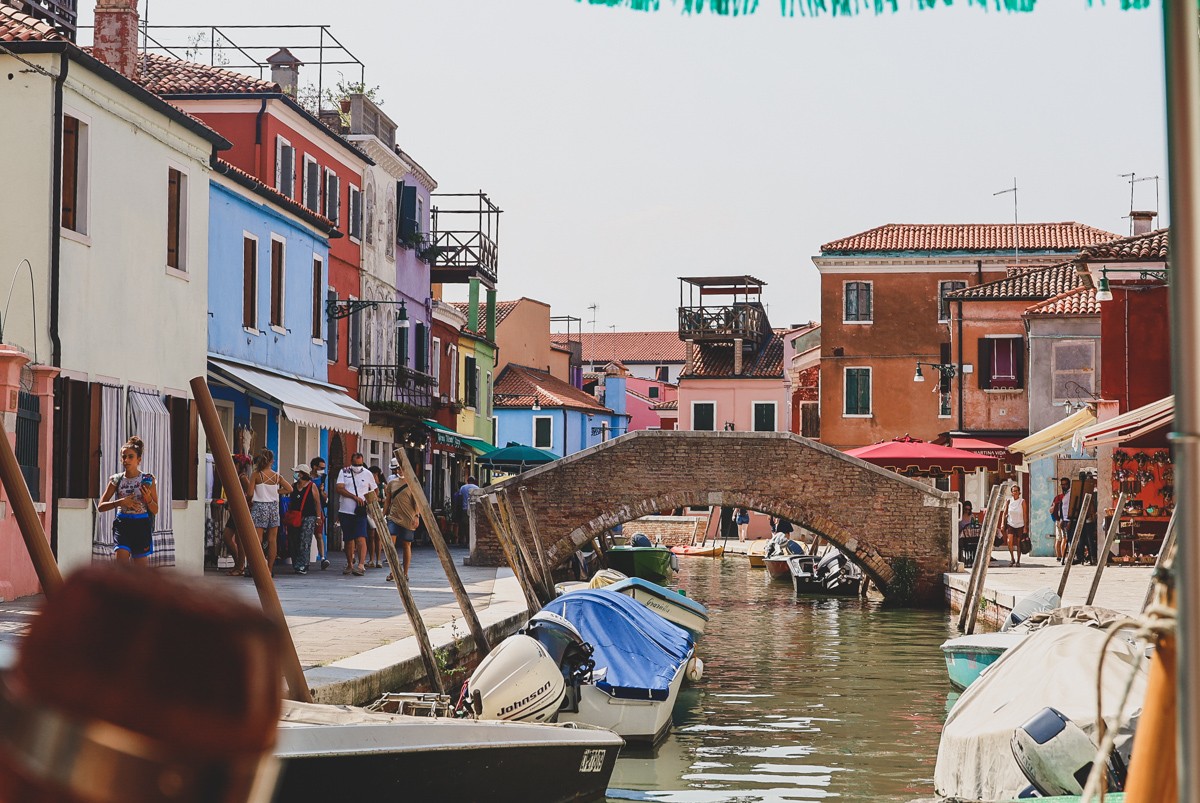 Possibly, you’ve already heard the legend why those houses are painted in different colours? Well, Burano once was a fishermen village, and it was easier for fishmen to see them from the water, especially when it’s foggy! 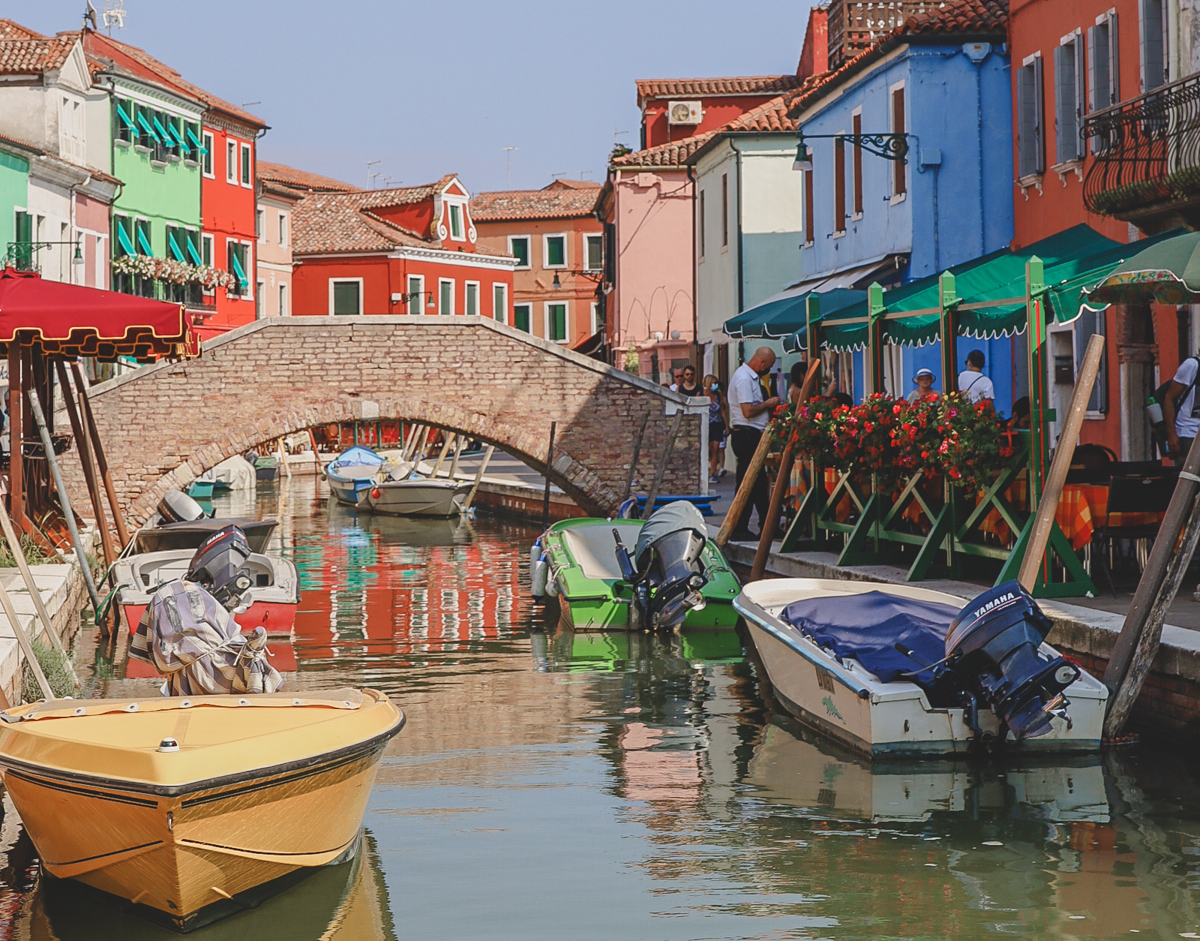 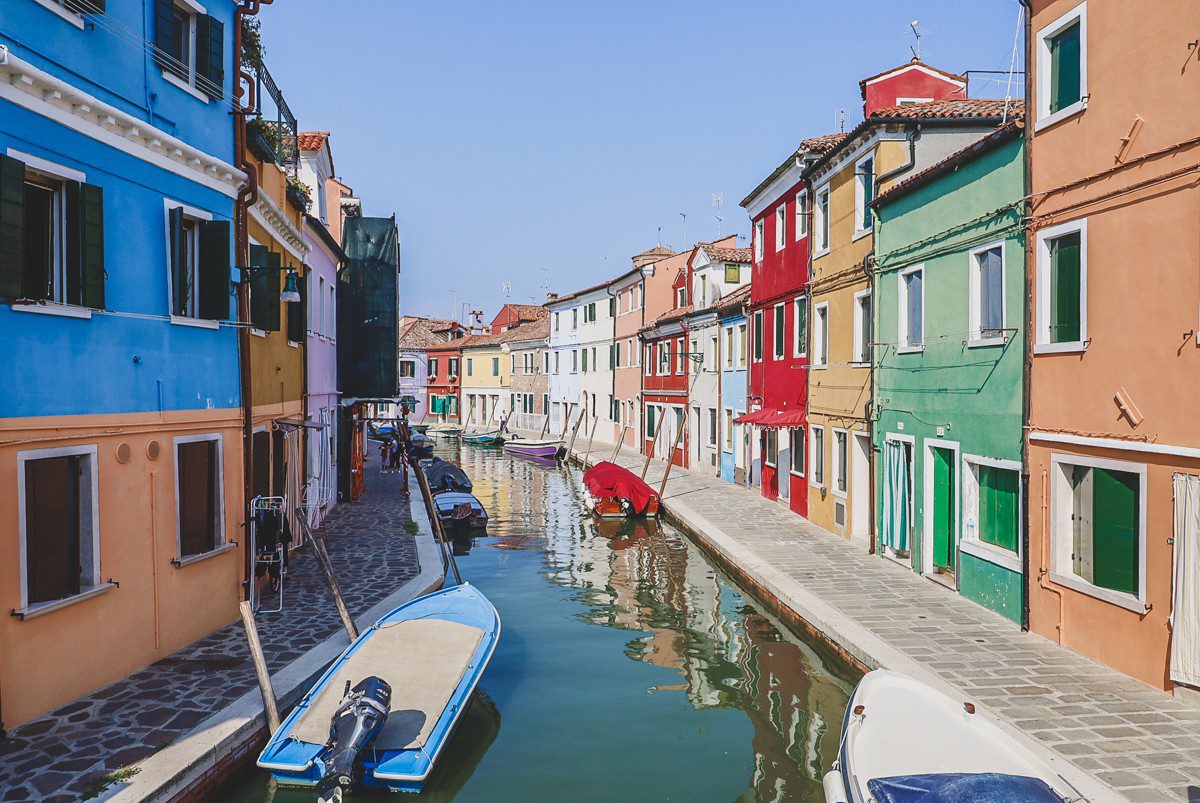 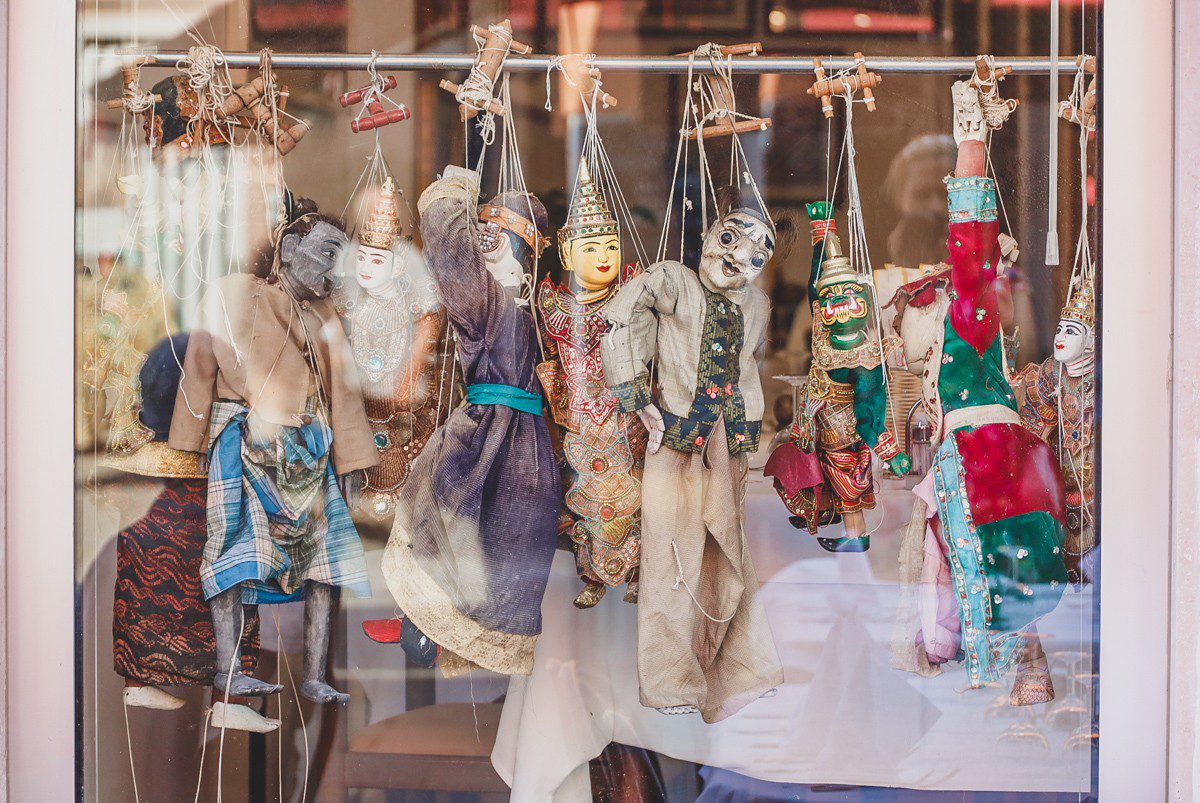 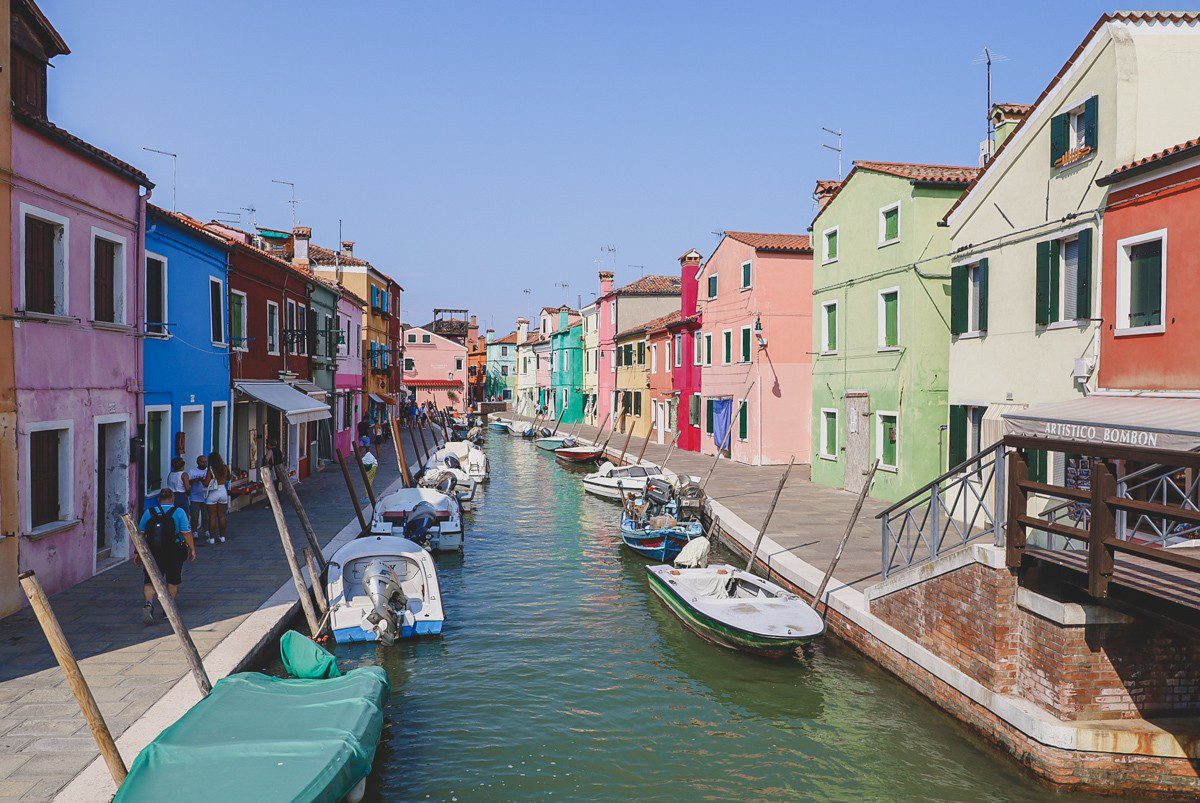 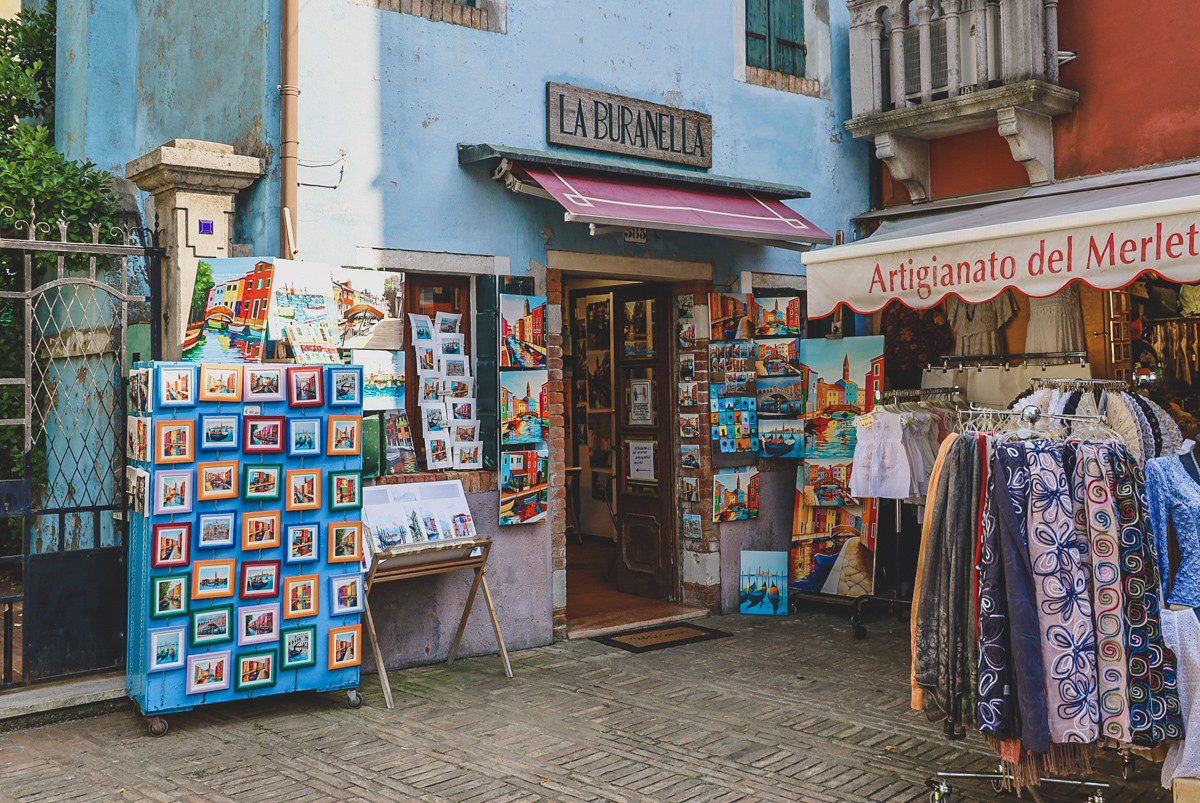 The less popular explanation provided to me by locals is that it’s easier to find your own house by colour when you drink too much wine. According to the third, the most boring one, different colors mark properties of different owners. Owners cannot choose the color of their houses and are obliged to repaint every two years.

What to see and do on Burano?

Three Bridges, or Tre Ponti, a wooden bridge connecting three canals is possibly the place to start exploring the island. You can get the best shots on rainbow-colored houses and streets (Via Giudecca, Via San Mauro and Via San Martino Sinistro)! 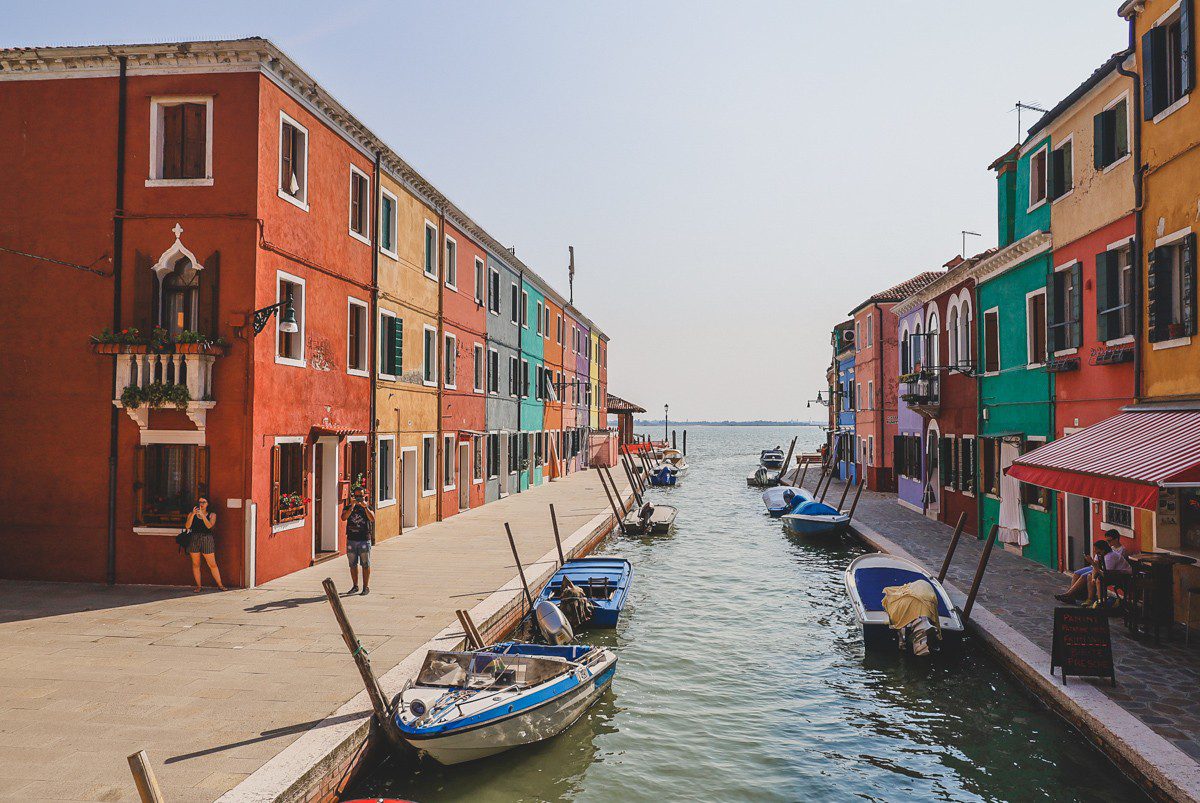 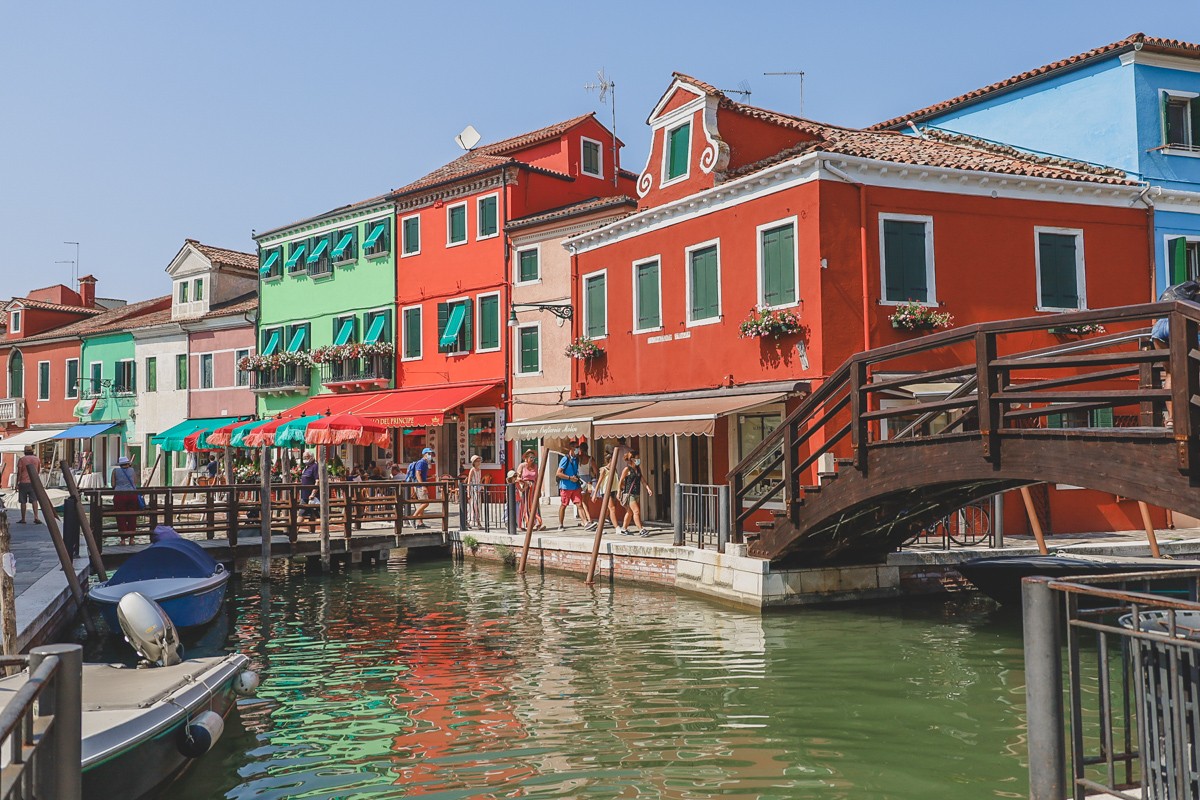 Baldassare Galuppi Square and Via Galuppi

The centre of the island is Baldassare Galuppi Square with the main street Via Galuppi. Both are dedicated to the musician Baldassare Galuppi Il Buranello (1706 – 1785) born on Burano. You can buy souvenirs there, learn about the history of lace making inside the shops and dine of course! Statue to Galuppi is created by a famous local sculptor Remigio Barbaro – his house is located on Burano as well. 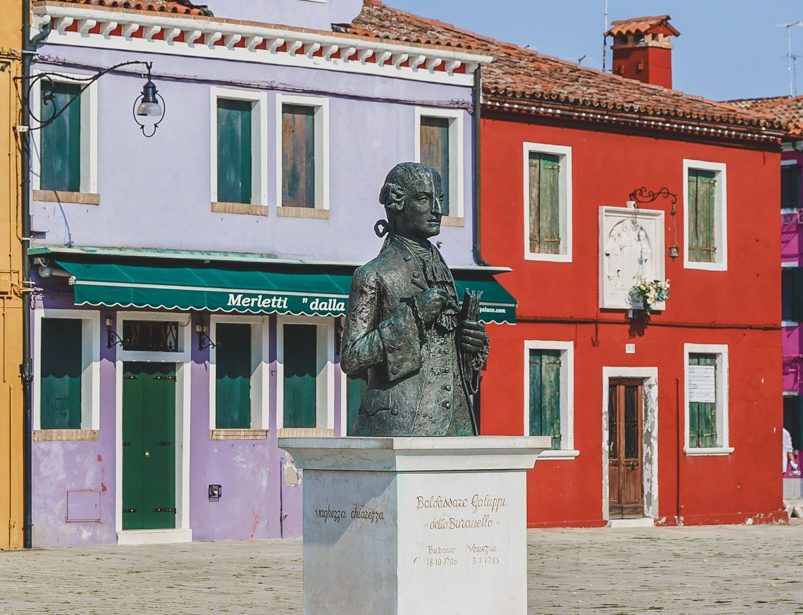 No surprise that the basis of Burano cuisine is sea food. Don’t miss risotto di gò alla Buranella, tagliolini and Bussolà and Esse biscuits and look for the more common venetian ingredients such as polenta, baccala, seppia nera. We tasted the best of it at the Trattoria al Gatto Nero da Ruggero. Initially it opened in 1946 and is now owned by the Bovo family. 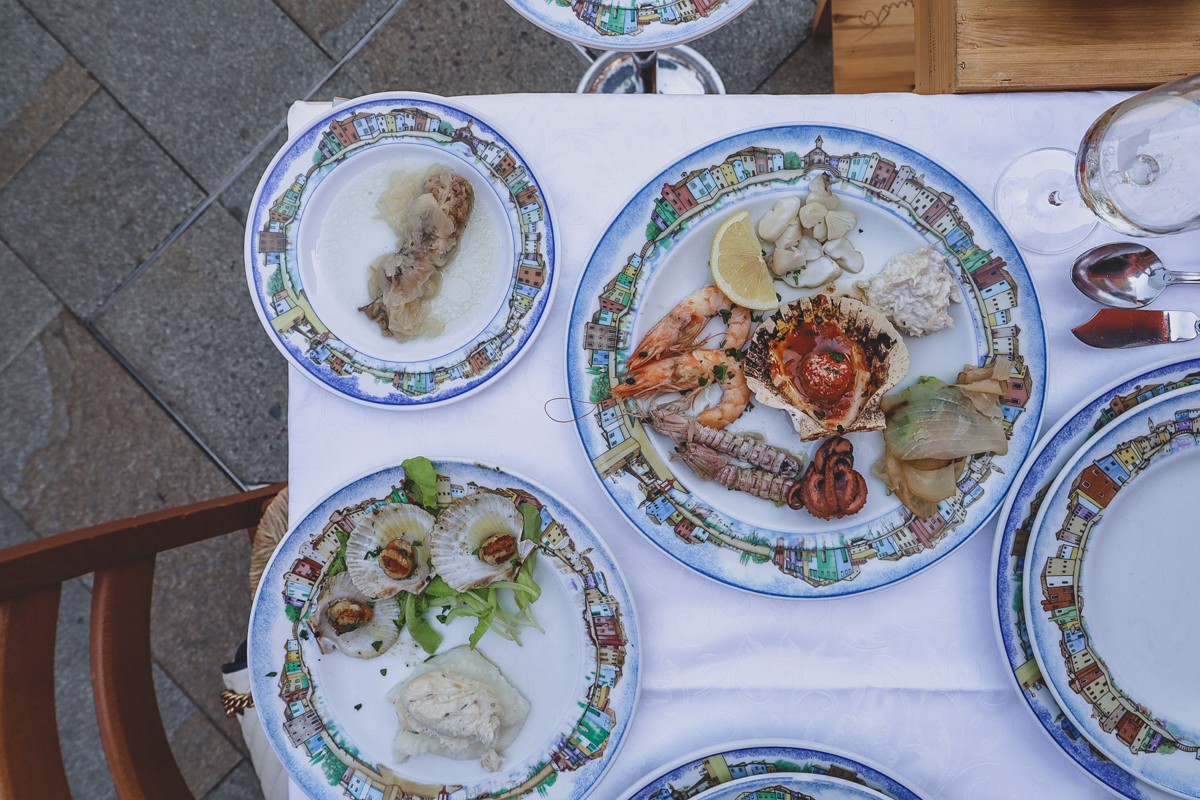 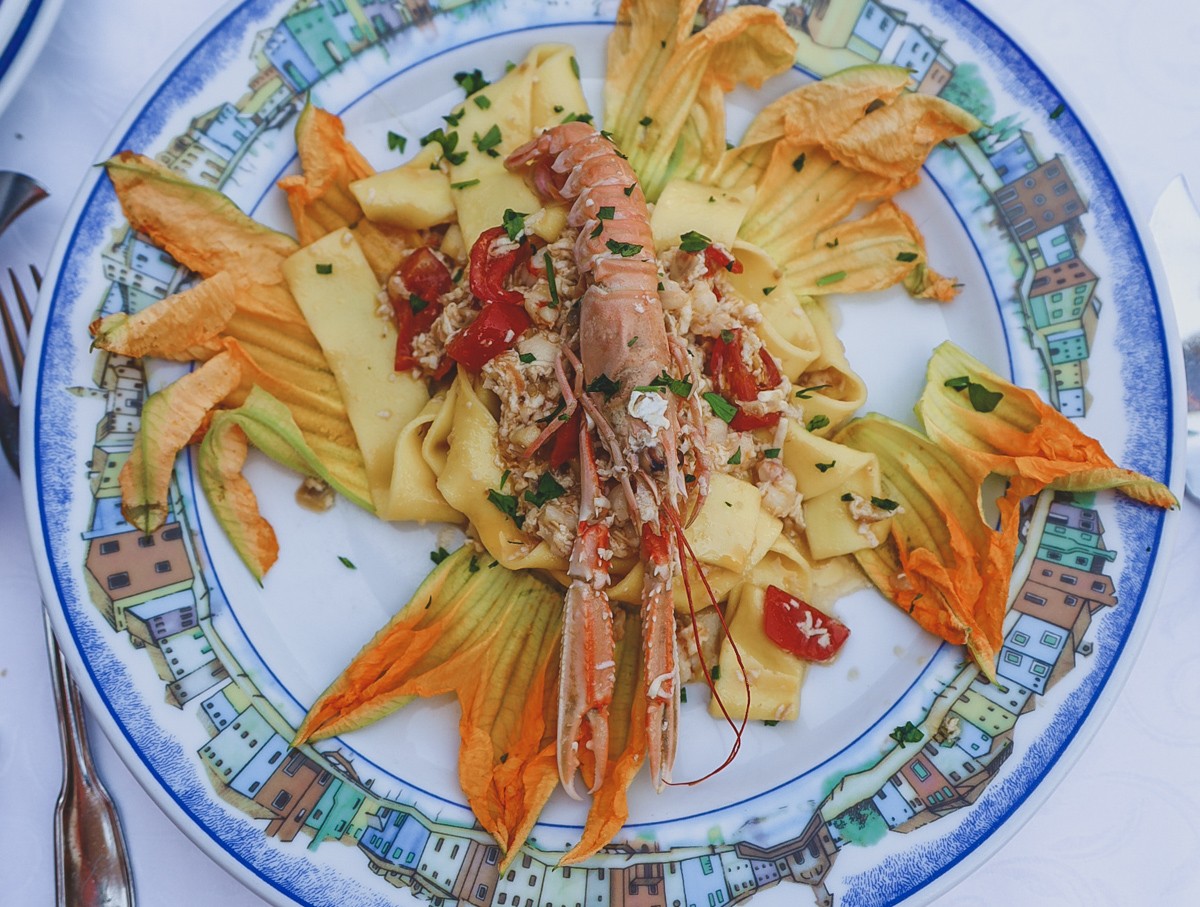 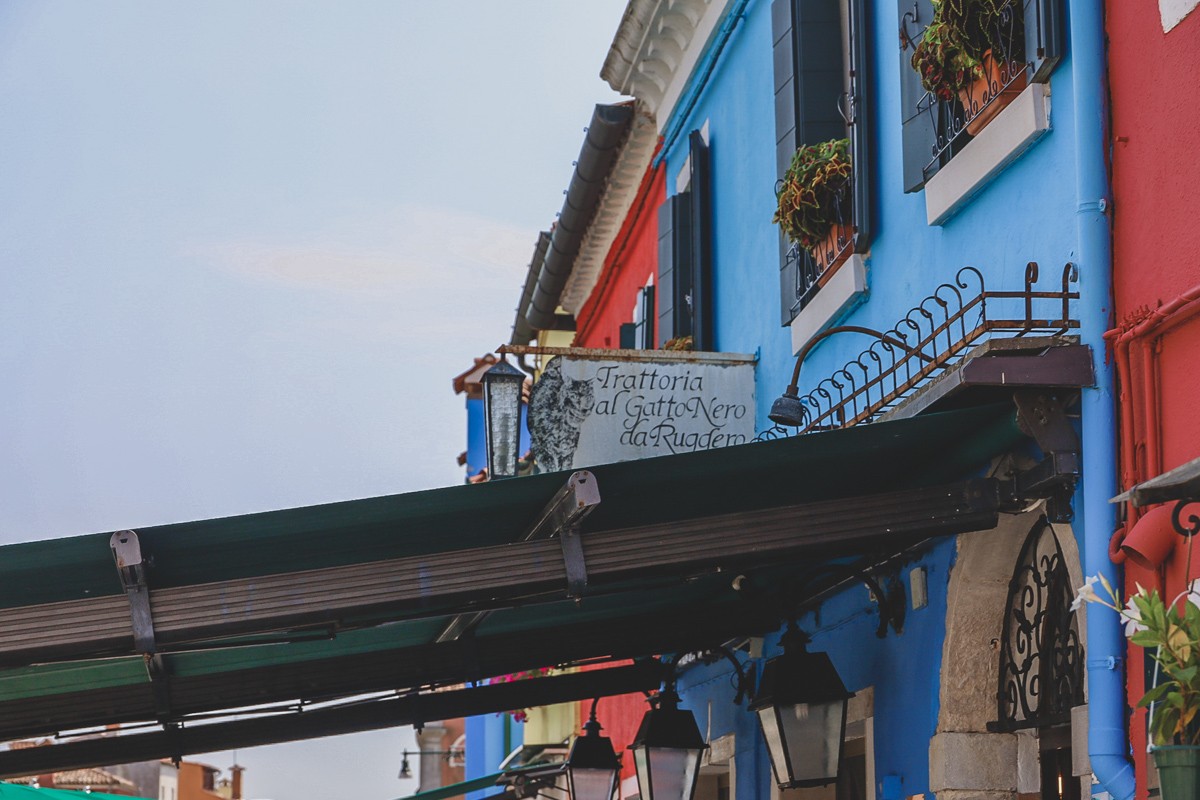 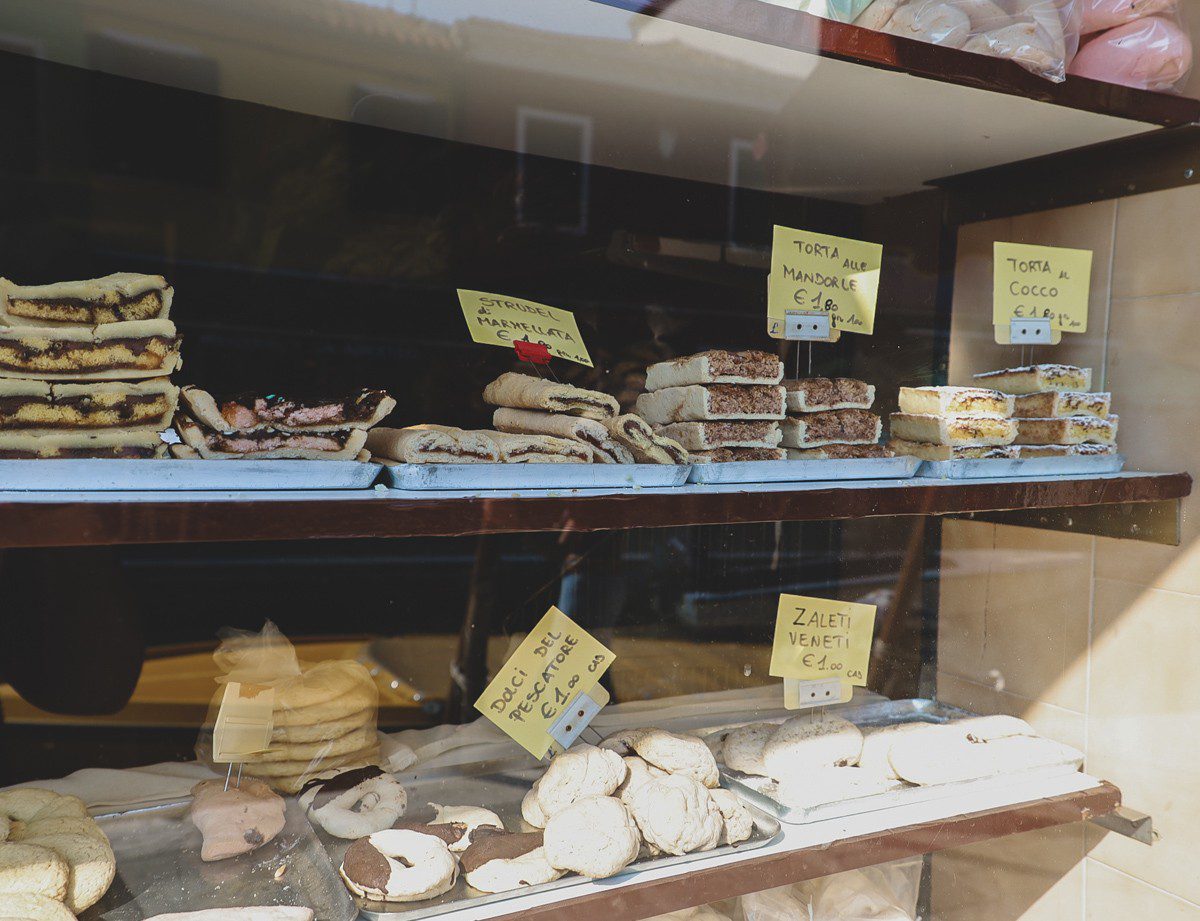 According to another legend, first lace actually appeared from the sea foam whipped by a siren and gifted to a fisherman. The real lace making at Burano is traced back to the 15th century. In the 19th century the art came into decline. From the 1970s the old mastery was revived, and there are still a few lace makers who create gorgeous pieces nowadays. Obviously, the real handmade lace costs a fortune but you can still buy cheaper versions too. 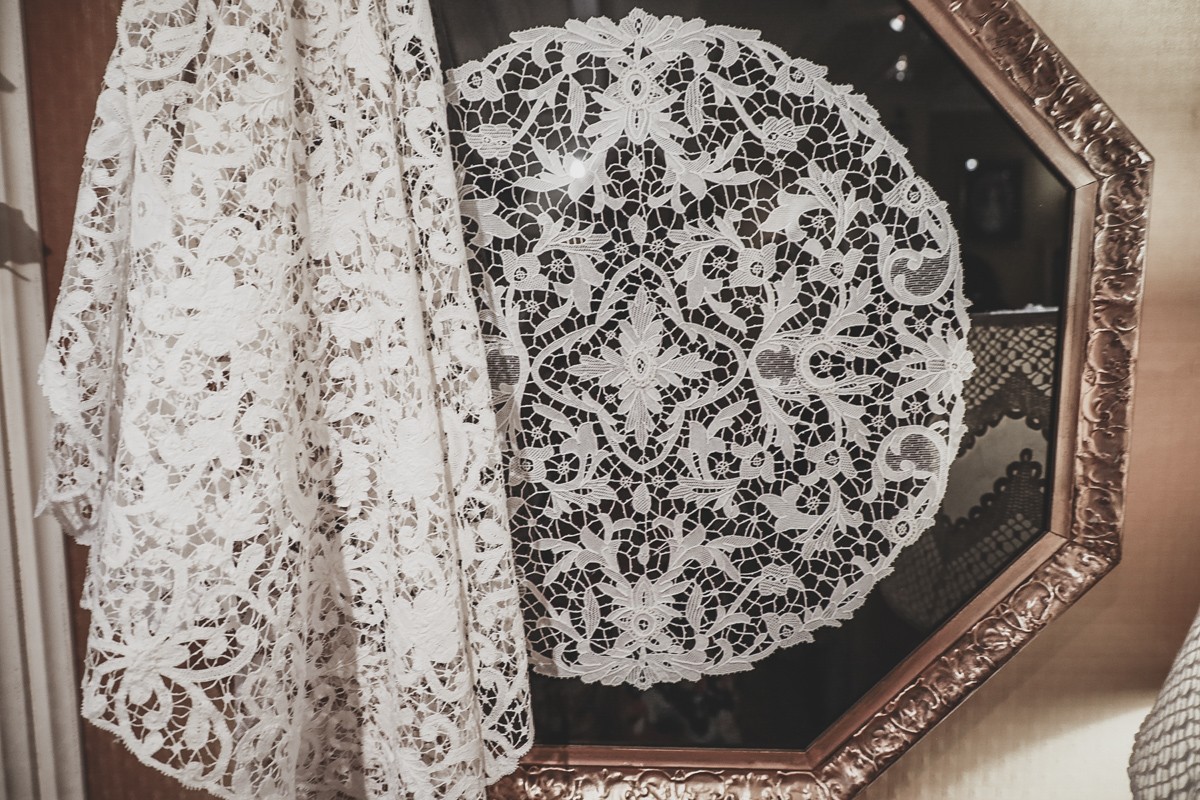 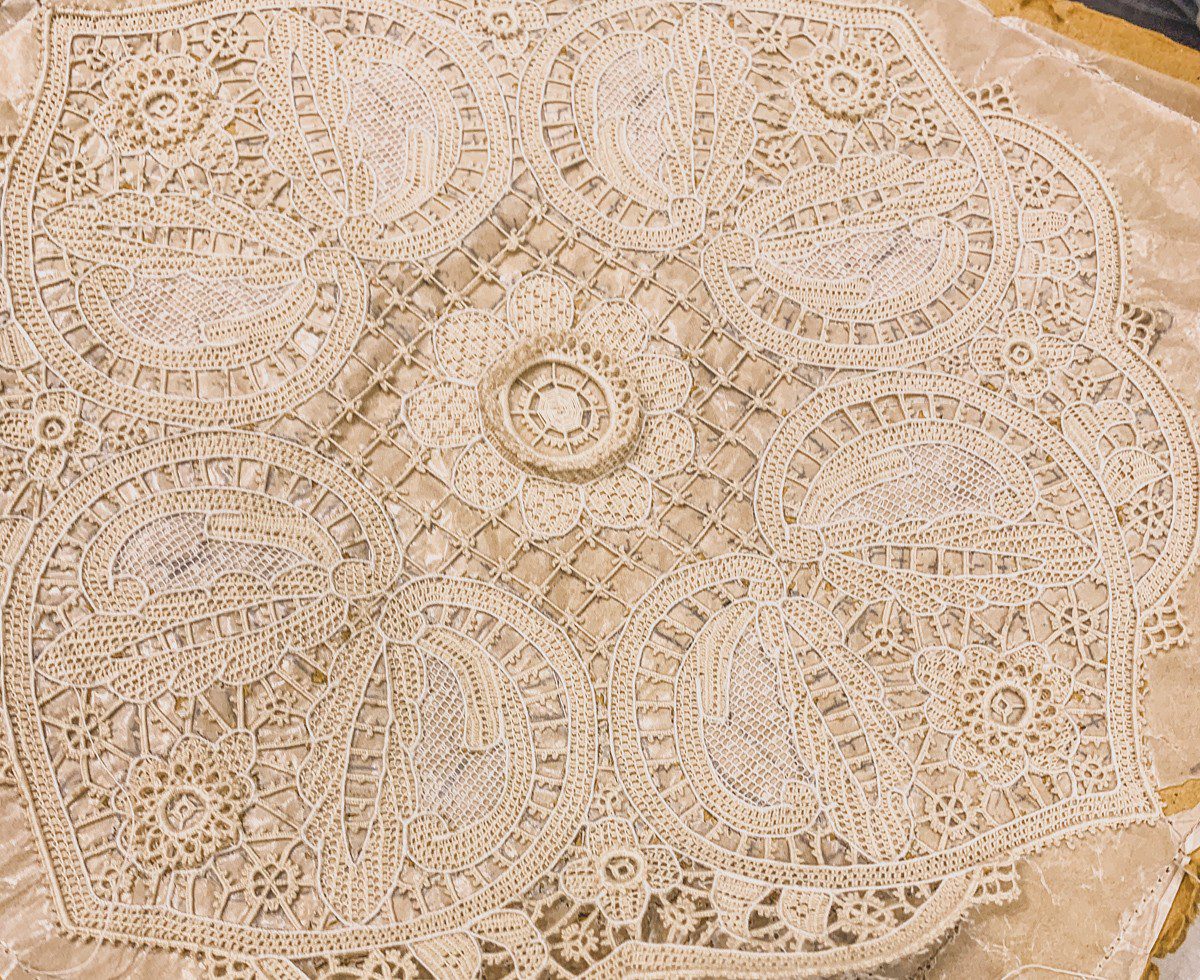 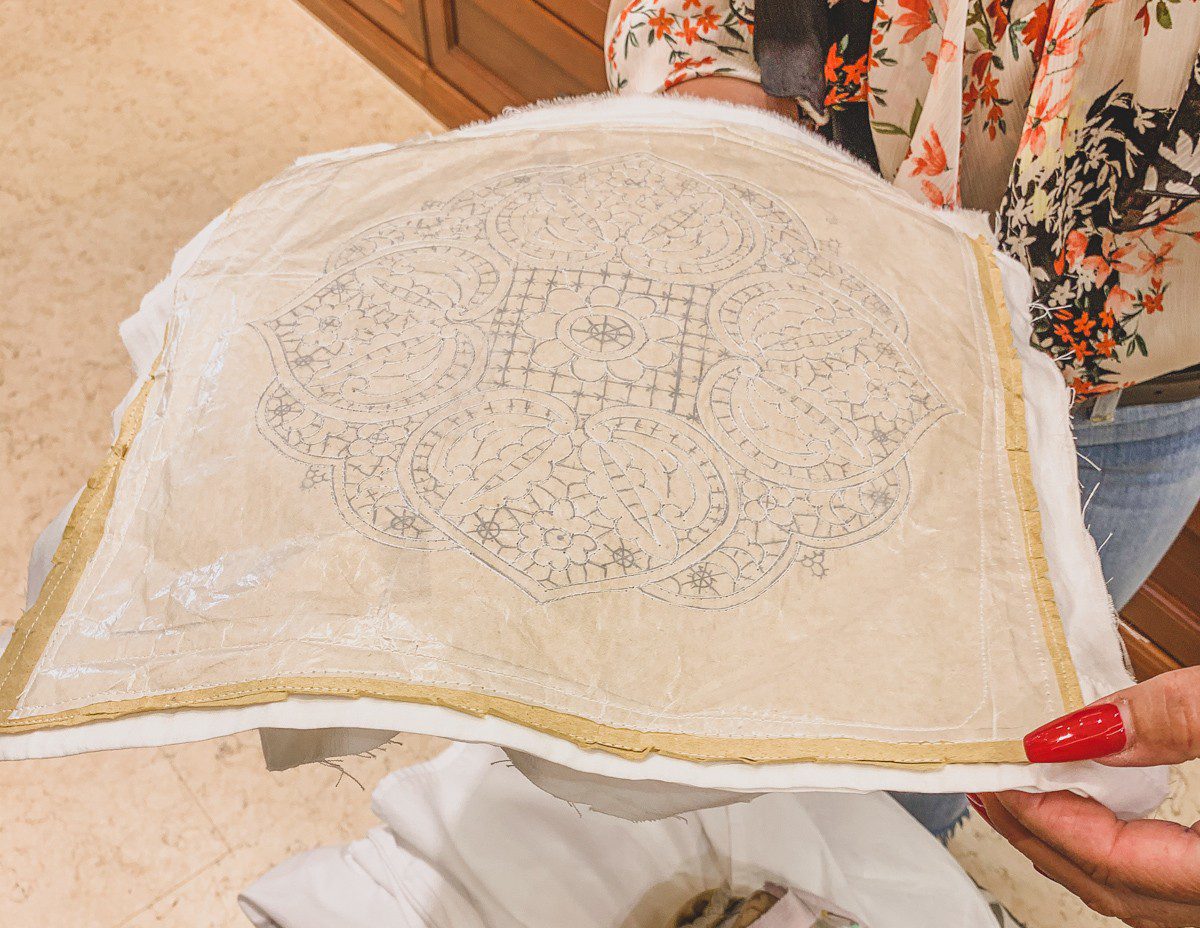 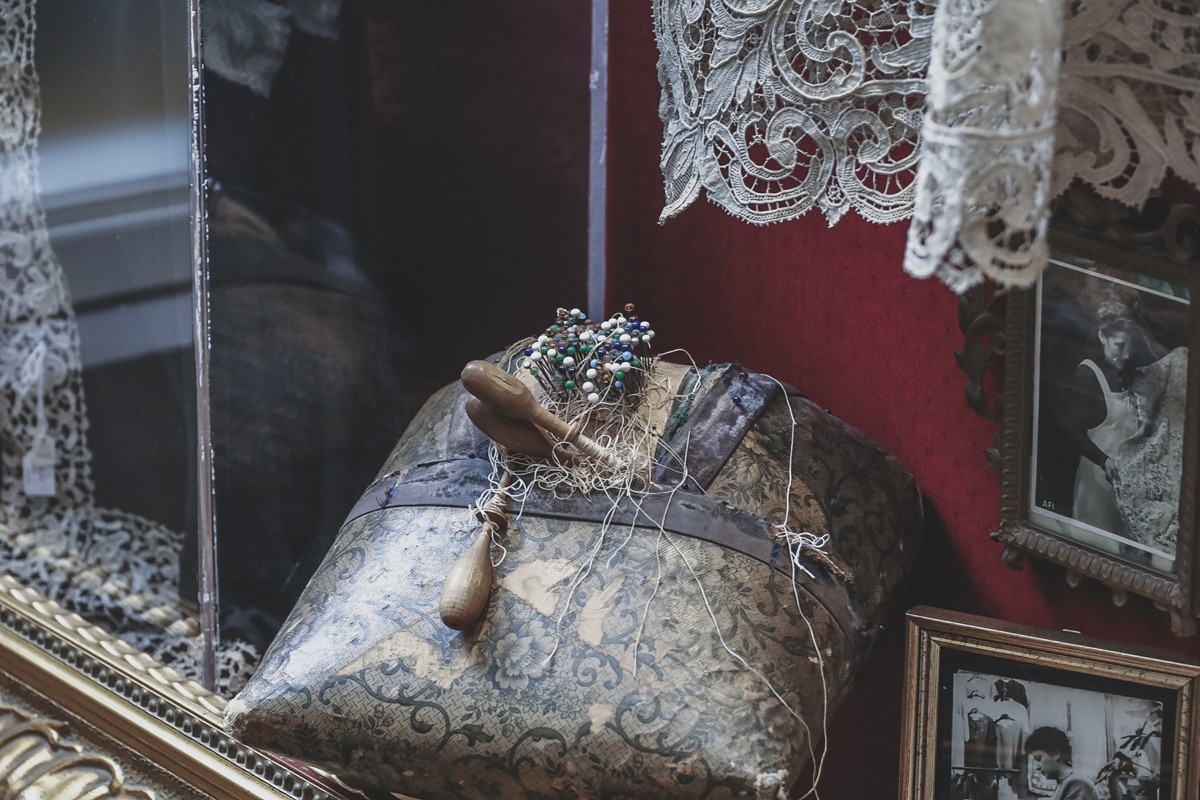 My photos were taken inside the La Perla shop but you can learn more at the Lace Museum (Museo del Merletto). By the way, the last pattern is the exact motif I had on my wedding dress which I bought in Italy! 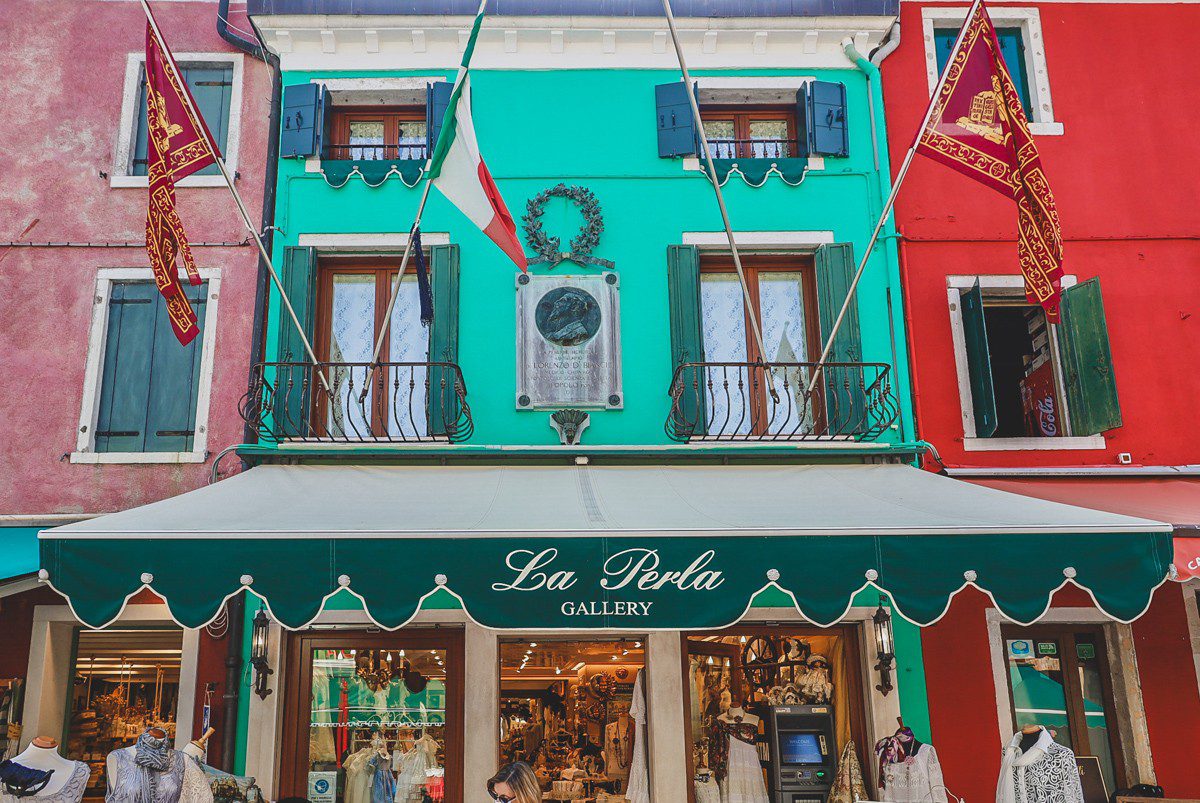 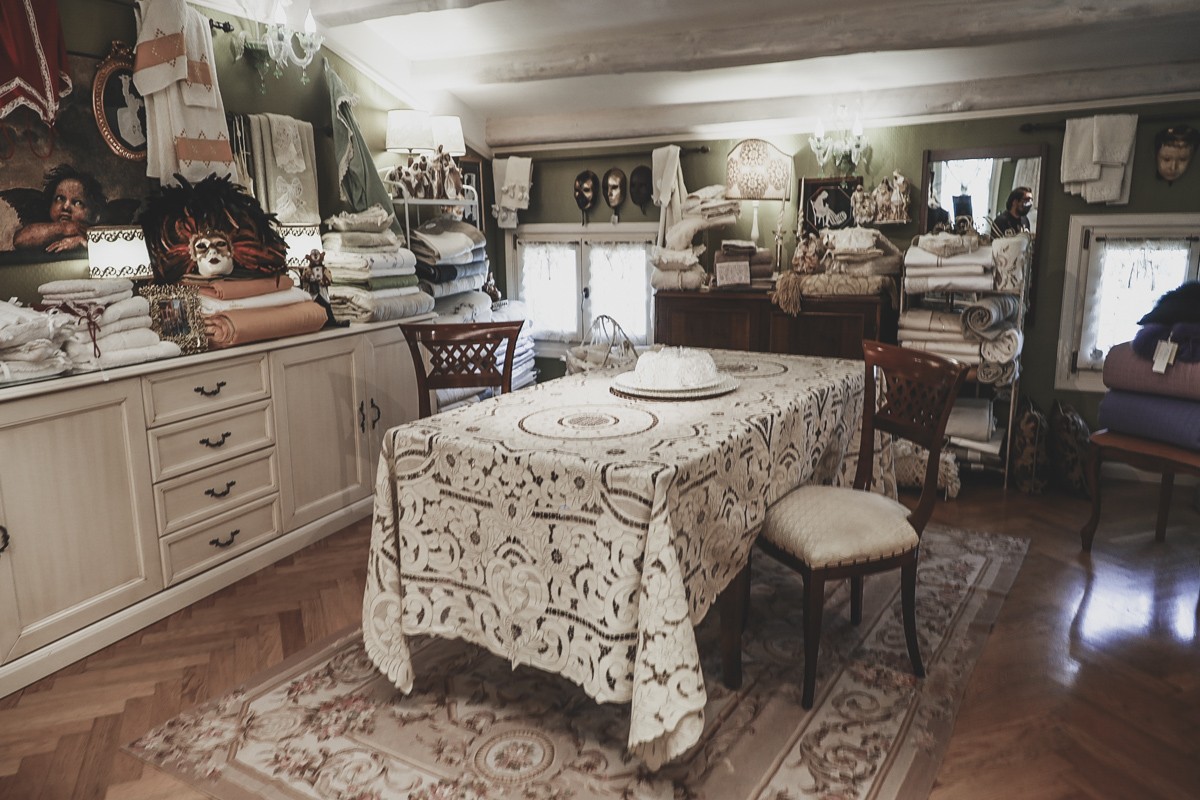 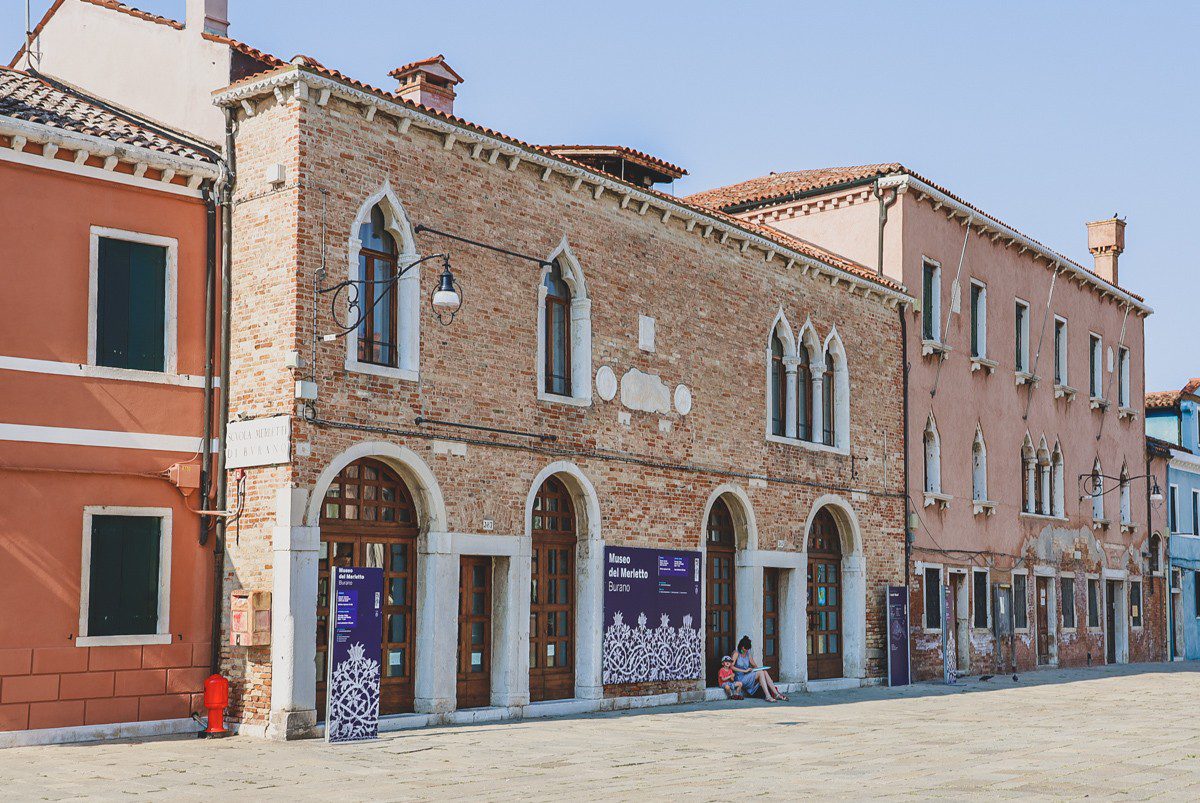 Another notable feature of Burano is the 17th century leaning (bell) tower. It belongs to the beautiful 16th century Church of San Martino – and inside you can find Crucifixion, a masterpiece by Gian Battista Tiepolo. Don’t miss the Chapel of Santa Barbara too! 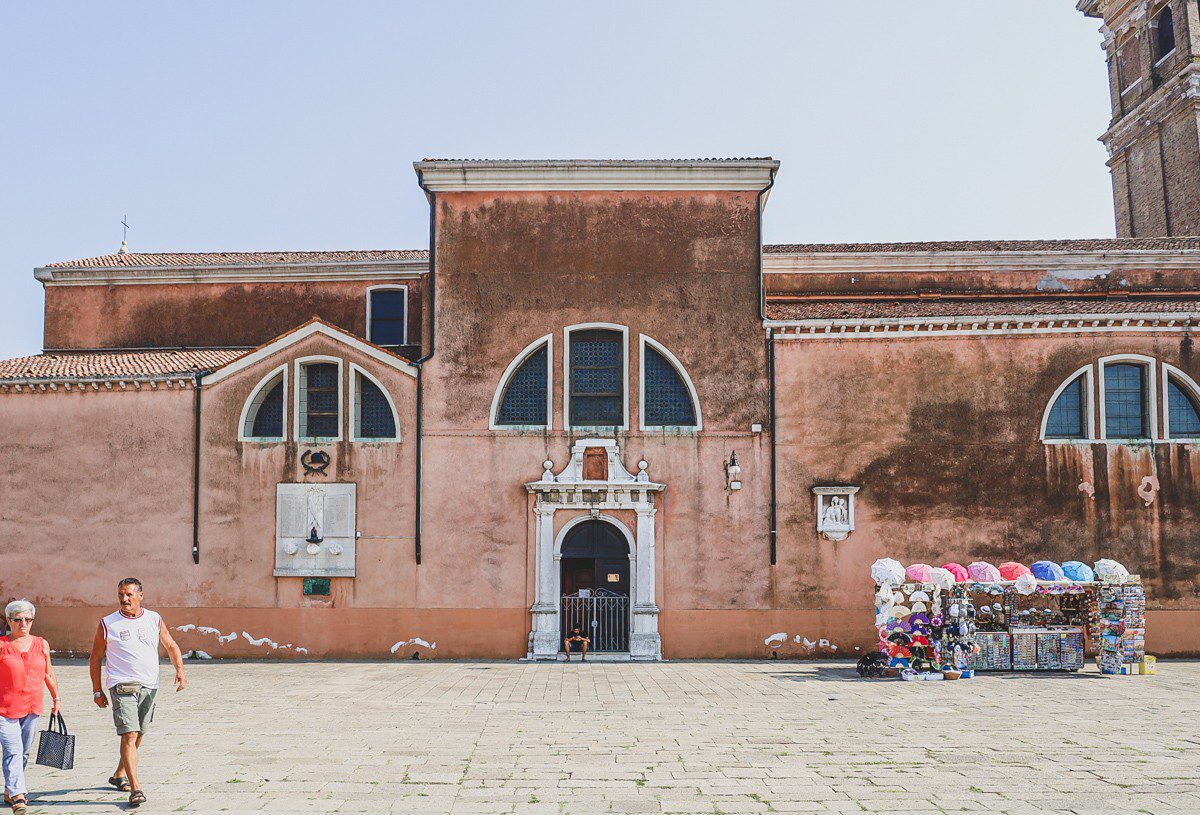 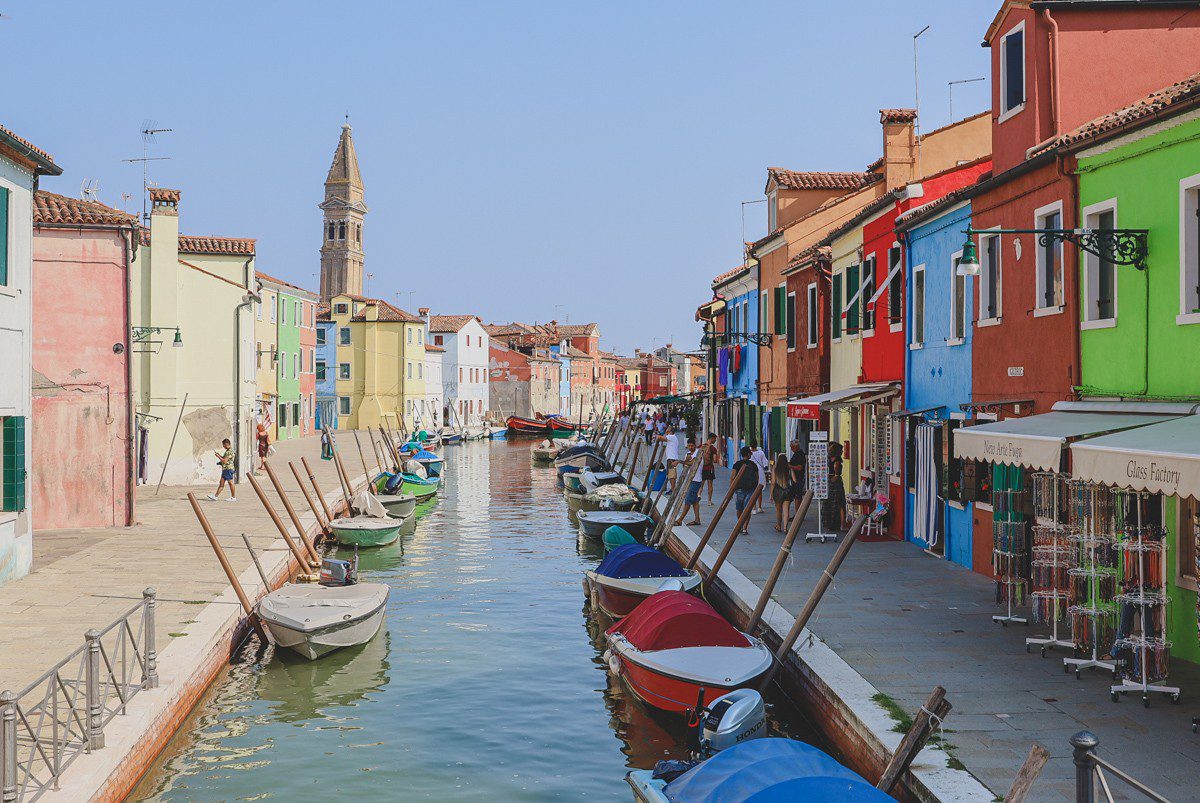 You can also pop into the fishmarket to explore the local delicacies but we came too late in a day for that. Alternatively, we bumped into the old outdoor fish market – looks really pretty doesn’t it.

How to get there from Venice?
Take a vaporetto 12 or a water taxi! 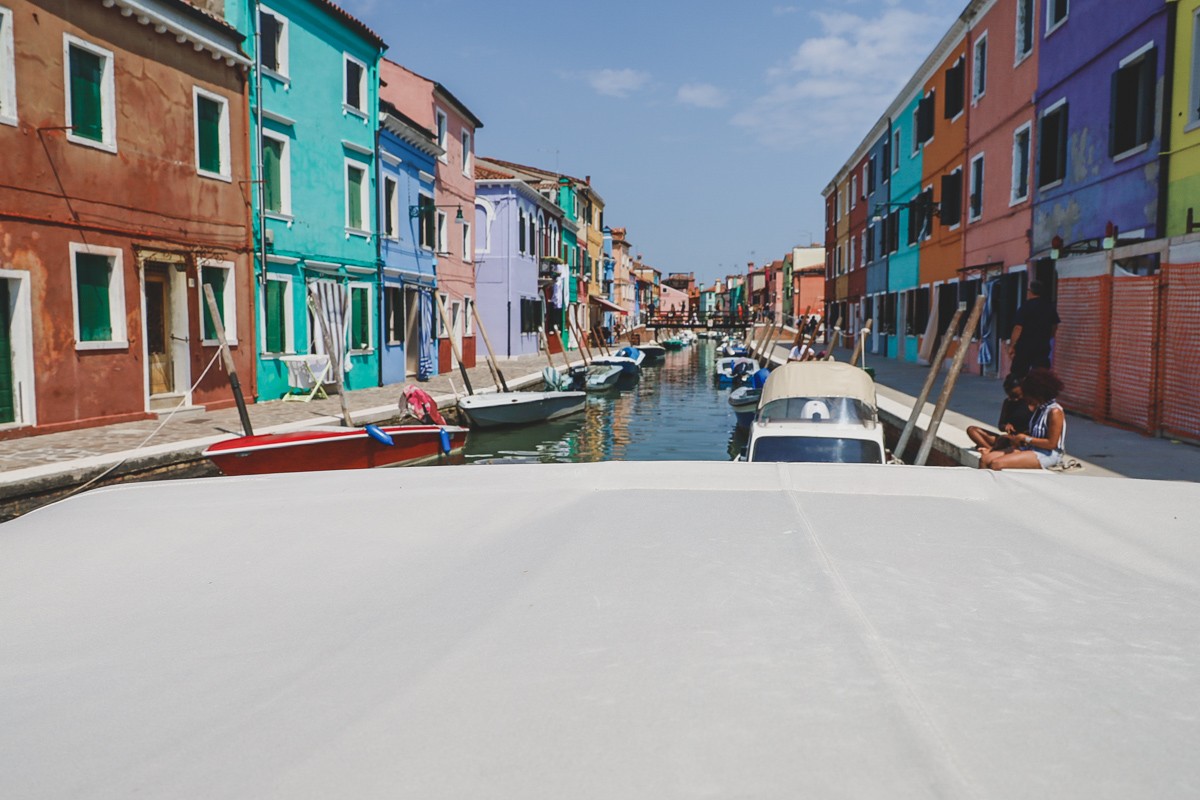 Hope you liked my new blog!