Zaragoza, a splendid capital of Aragon, has so many treasures to explore!

Zaragoza is a Spanish gem from all points of view: historical, archeological, architectural, gastronomical and cultural. Its historical heritage is immense: Zaragoza is an ancient Roman city named after Emperor Augustus and now is the capital of the Aragon, heir to the medieval Kingdom of Aragon.

It is a spot for Mudéjar buildings and has a few architectural sites mentioned amongst the UNESCO protected ones. Now it’s a modern and vibrant city that hosted Expo-2008 but still it attracts visitors more by its historical landmarks. Let’s see what they are!

Palacio de la Aljafería is an 11th-century castle reminiscent of the era when Muslims inhabited this area. It was massively reconstructed in the 20th century but still feels extremely authentic. Now the headquarters of the Cortes de Aragón, parliament for the autonomous community of Aragon, sit here as well but you can still visit the courtyard of Saint Isobel and a number of gorgeous rooms and halls including amazing Salon Del Trono and Salas de la Planta Superior.

Palacio de la Aljafería is considered one of the treasured gems of Spanish heritage. And there is a good reasoning behind it – enjoy the beauty and intricate details of Moorish architecture mixed with later influences!

2. The Square of Our Lady of the Pilar

The Square of Our Lady of the Pilar, or Plaza Nuestra Señora del Pilar, is a huge square where you can find the Basilica, the SEO Cathedral, Lonja, the monument dedicated to Goya and Fuente de la Hispanidad (Fountain of Hispanicity) build in 1991 and representing the Latin America.

3. Basilica of Our Lady of the Pilar

The 130-meter long Basílica de Nuestra Señora del Pilar is possibly the most recognizable and important building of Zaragoza. It’s an immense baroque building with Goya’s frescos and beautifully tiled domes – it was originally constructed in the 17th century and modified in the 18th century.

There were numerous churches dedicated to Lady Mary before that on this particular site – and why is it considered sacred? It’s believed that Virgin Mary ordered Apostle James (who was in Spain at that time) herself to build a church on this place around 40 AD. So, technically it is considered the first church ever dedicated to the Virgin Mary, and it makes it a very important place of pilgrimage for christians. Two main relics are the figure of the Virgin Mary commemorating her apparition and the jasper Sacred Column (El Pilar).

I highly recommend observing it not only from the Plaza de la Pilar but also from the Stone bridge too (see below).

La Seo, or the Cathedral of the Savior (Catedral del Salvador), is another gem of Zaragoza, one of the finest examples of the Mudejar architecture. Originally the Roman Forum was situated on this place (you can still visit the Roman Forum of Augustus of Caesaraugusta museum nearby), then it became a Visigoth church, after that it was a mosque which in the 12th century was converted into a cathedral. As a result, you can study architecture styles from it because the architectural elements such as Romanesque, Moorish, Gothic, Baroque and Neoclassical ones are all mixed up in it.

The Tapestry Museum is also located inside the Cathedral.

Another landmark located on The Square of Our Lady of the Pilar is the mid-16th century Lonja, a beautiful example of Renaissance architecture of Aragon performed after a plan of architect Juan de Sariñena. Once used by the merchants as a trade site, now it hosts modern exhibitions at its Sala de Exposiciones. Pay a special attention to medallions on the facade depicting the kings of Aragón and the ceiling echoing the exotic palm trees – aren’t they breathtaking!

Mercado Central opened in 1903 sits on the spot where Zaragoza’s market has been located since the 13th century. While examining the stalls with delicious food, don’t forget to glance occasionally at the metal frame of the building too!

Roman presence is still very noticeable in Zaragoza. Founded around 14BC, it was named after Emperor Augustus and known as Caesaraugusta. Alongside Museo del Foro de Caesaraugusta mentioned above and Museo de las Termas Públicas (thermal baths), the Roman theater is one of the main sights to visit. It was discovered in 1972 and now occupied by the local cats.

Ruins of the ancient Roman walls that once stretched around Caesaraugusta for about 3 km and included about 120 defensive towers are another landmark to see. One of the surviving sections is located near the Central Market (see below) – look for the statue of Emperor Augustus, a replica of the one from the Vatican City.

Looking for something colourful? Love Street Art? Then go to the El Gancho (or, as it’s also called sometimes, el barrio de San Pablo) district adjacent to the historic centre! We passed it though when walking from the train station to the main square of Zaragoza and admired it.

Tip:
another area of the city not to miss is El Tubo where you can enjoy the tapas.

10. Church of San Pablo in Zaragoza

Well, if you wondered why El Gancho is also called El barrio de San Pablo, here is the answer: Iglesia de San Pablo de Zaragoza is located there. It’s an absolutely amazing and vast complex with an outstanding octagonal tower in Mudejár style built in the 13-14th centuries as a replacement of a smaller church dedicated to San Blas. Pay special attention to its altarpiece dating back to 1515. This church is considered one of the most important examples of the Mudéjar architecture in Aragon which has been listed as a UNESCO World Heritage site alongside La Seo and Aljafería Palace in 2001.

Francisco José de Goya y Lucientes born in Fuendetodos near Zaragoza in 1746 is undoubtedly one of the most important artists Spain has gifted our world. He lived in Zaragoza as a child and returned to the city as an accomplished master later. Goya Museum–Ibercaja Collection showcasing his work is a must visit – and the building of the museum itself is quite a pretty architectural piece once belonging to Jerónimo Cósida and dating back to the 16th century!

Puente de Piedra, or the Stone Bridge, across the River Ebro first was erected on this place in the beginning of 15th century (the wooden ones existed there before that too) but lots of adjustments were made later including the Lions added in 1991. Because of them the bridge sometimes is called Lion Bridge. Visit it at sunset for the best views over the historic manlarks of Zaragoza or join a cohort of photographers to get a shot of it from the water level – just cross the bridge from the historic centre to the other side and go down to the embankment!

Tip:
If you liked Mudéjar architecture, give Santa Maria Magdalena a go too!

Another church dedicated to Lady Mary, Church of Nuestra Señora del Portillo, stayed on this site since the 12th century but the current building was built in 1702-1731 and modified in 1827 and in the 20th century. One of its special characteristics is The Mausoleum of the heroines of Zaragoza Siege: Agustina de Aragon, Casta Alvarez and Manuela Sancho. 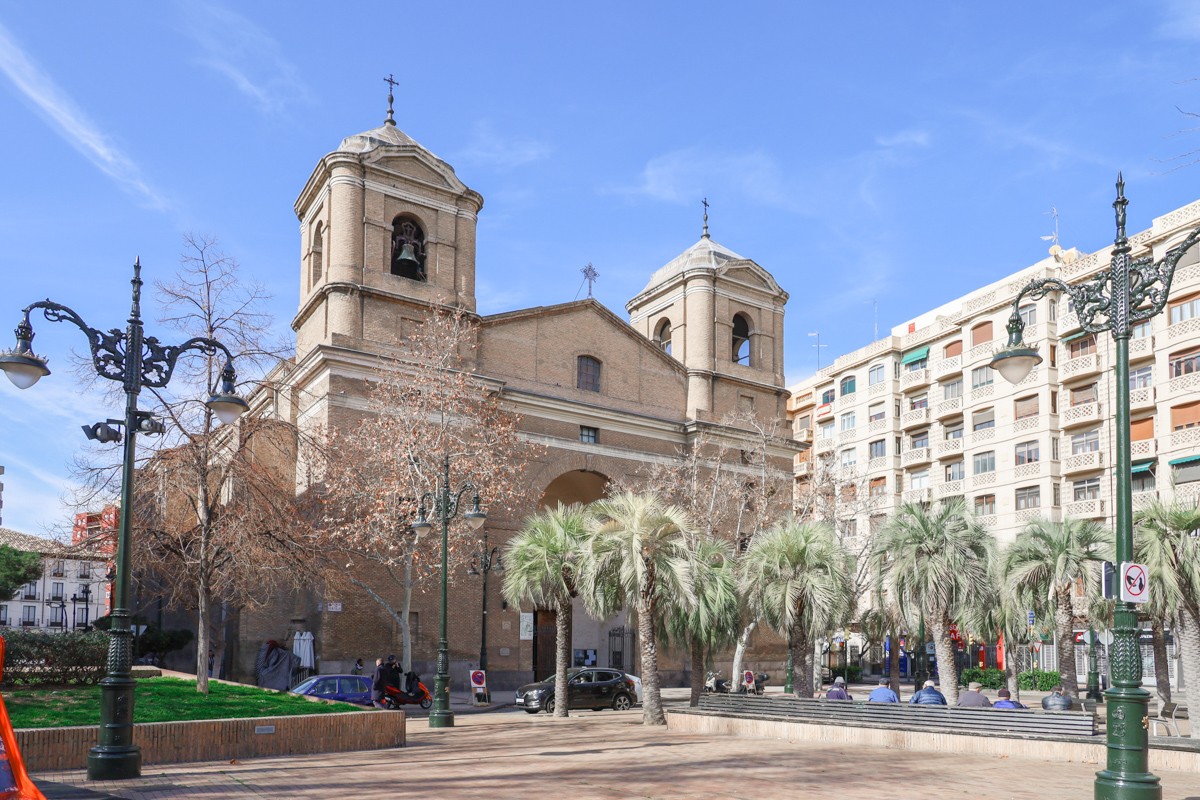 Zaragoza Museum is the oldest and one of the most important museums of the city tracking its history from prehistoric times (sorry for a pun). Alongside with archeological objects it hosts a fine art collection.

Admire the architectural beauty of the Zaragoza Bullring. All in bright yellow and red, it was opened in 1764 and is really a remarkable building. I must mention that I don’t support bullfighting in any way although I understand that this is an important Spanish tradition.

Finally, if you happen to pass Calle de San Miguel, give a proper look to the Monastery of Santa Catalina (Clarisas Convento de Santa Catalina), the oldest female monastery of Zaragoza founded in 1234. Once it belonged to Mudejar architecture sites of the 14th century too as many others but unfortunately the convent’s fate wasn’t very lucky in the last 2,5 centuries and it was rebuilt a few times.

How to get to Zaragoza?

We took a direct high speed train from Barcelona to Zaragoza and walked from the train station to the historic centre. Taxis and buses also connect the city centre and the station.

See my other blogs about Spain too: