This spring I’ve travelled to South Korea for the first time. It was a really amazing experience, and I’m happy to share it with you! 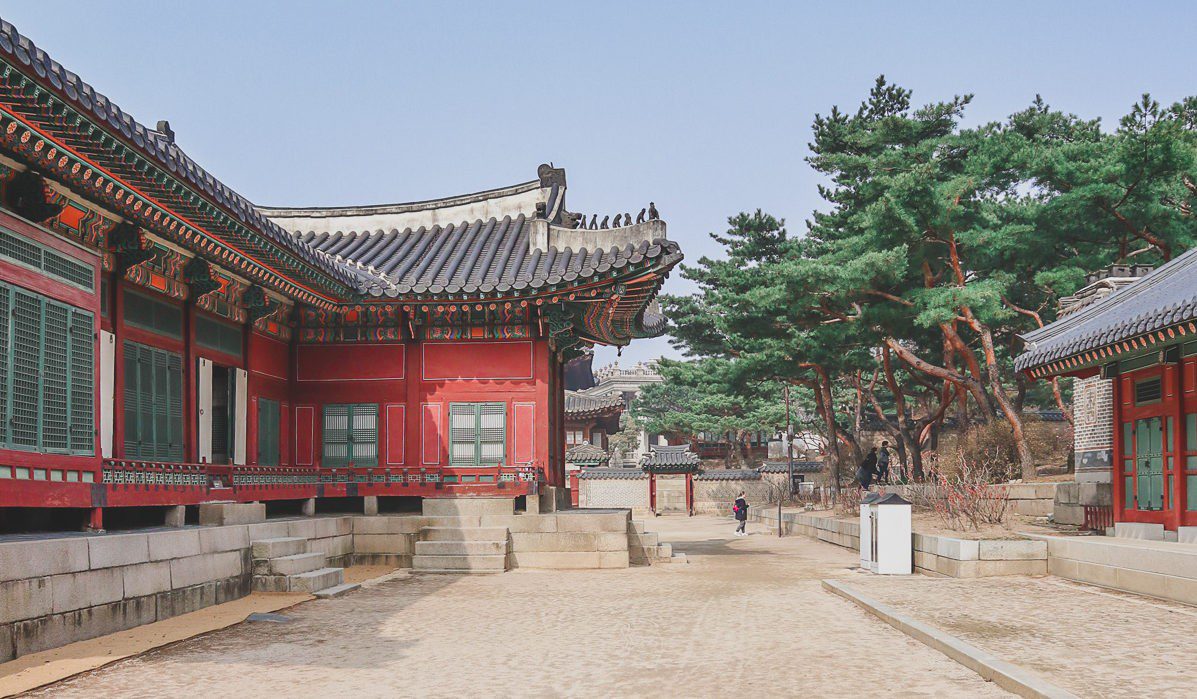 So far I’m planning to write four blogposts about South Korea: places to see, things to do and to try, five grand palaces and locations to visit on a short trip from Seoul! This first one is dedicated to historical places and most notable tourist attractions in the capital of South Korea. Don’t forget to subscribe so you don’t miss the other three that are coming soon! 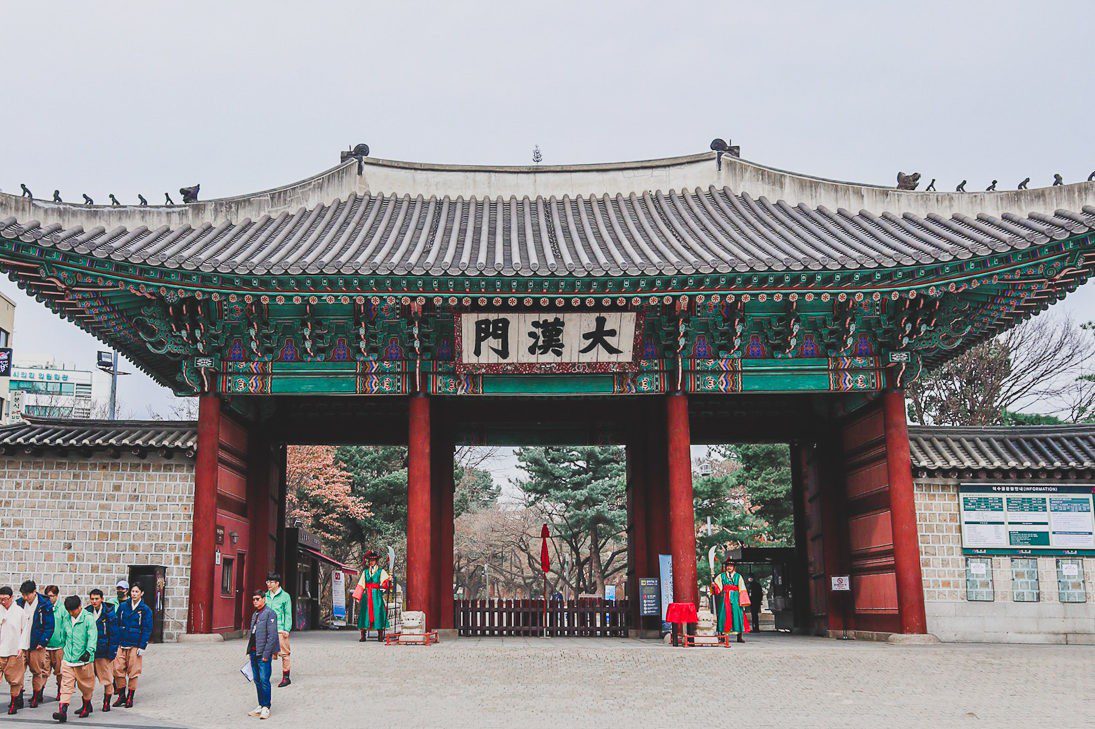 But don’t worry if you don’t have time to explore them all! Main architectural features are very similar among them although every place is unique and has its own past. 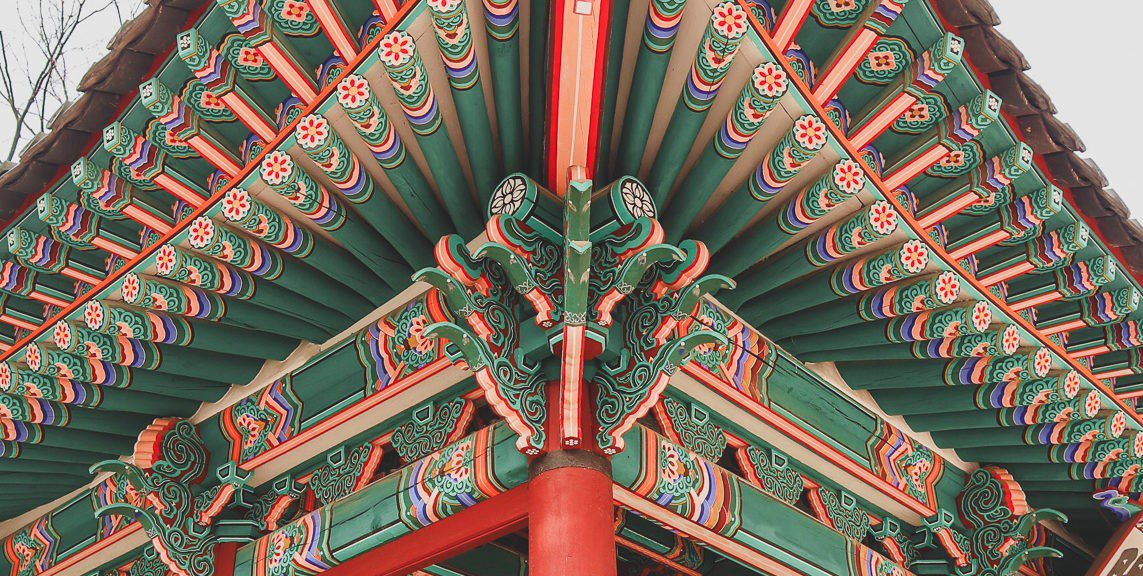 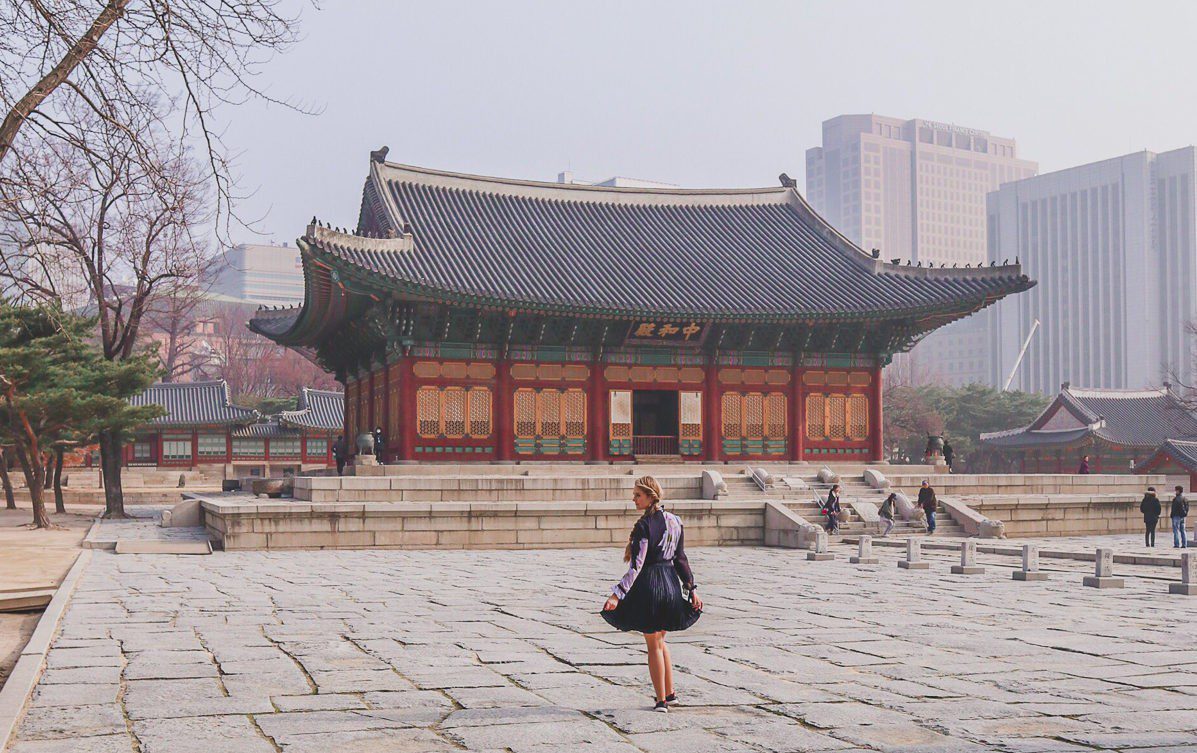 As the palaces and temples are made of wood, it’s unsurprising that the buildings you’ll see are the modern versions of the original buildings.

Tip: Admission to the palaces is free every last Wednesday of the month. 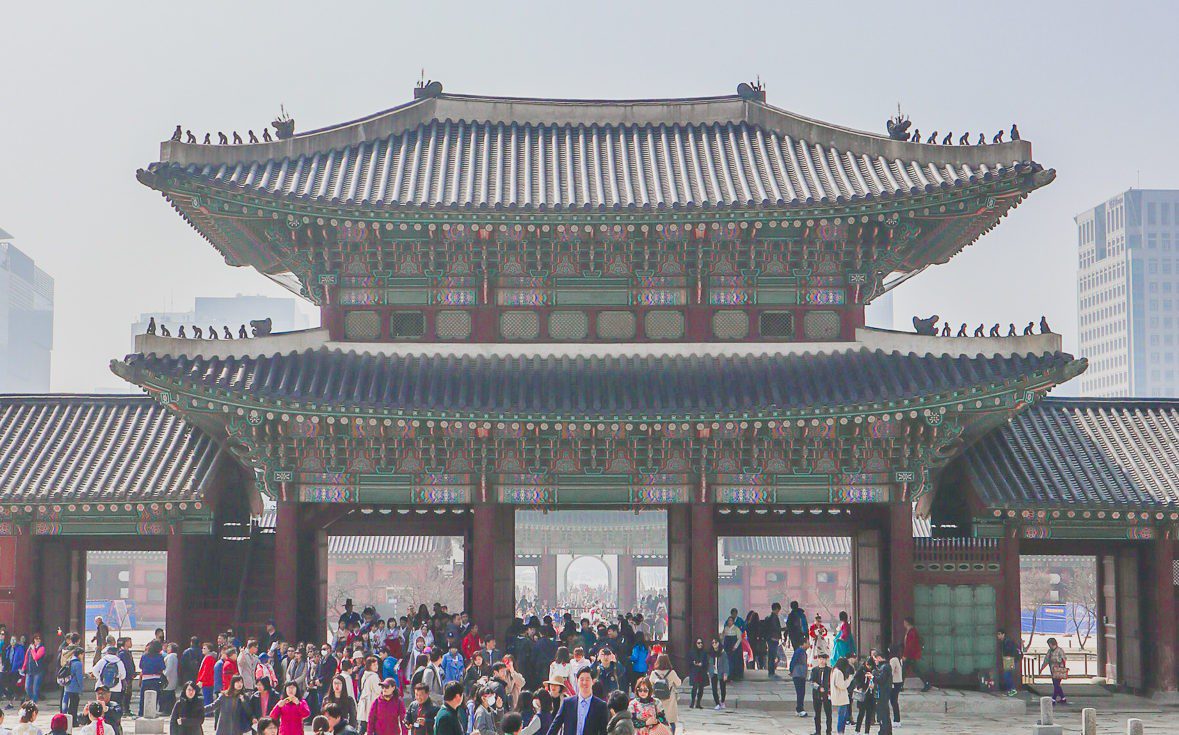 I’ll look into all five palaces closer in one of my future post.

Historical fact: Joseon dynasty ruled Korea for over 5 centuries from 1392 till the Japanese control over Korea took place (1910-1945). In the last years of its rule – since in 1897 – the Great Korean Empire was proclaimed.

Want to feel the atmosphere of old Korea and to see how it looked like during the rule of Joseon dynasty several centuries ago? A lot of traditional houses, rent of hanbok (traditional clothes), tea ceremony – you can find it all at the Bukchon Hanok village. It comes as no surprise that this area is heavily packed with tourists 🙂 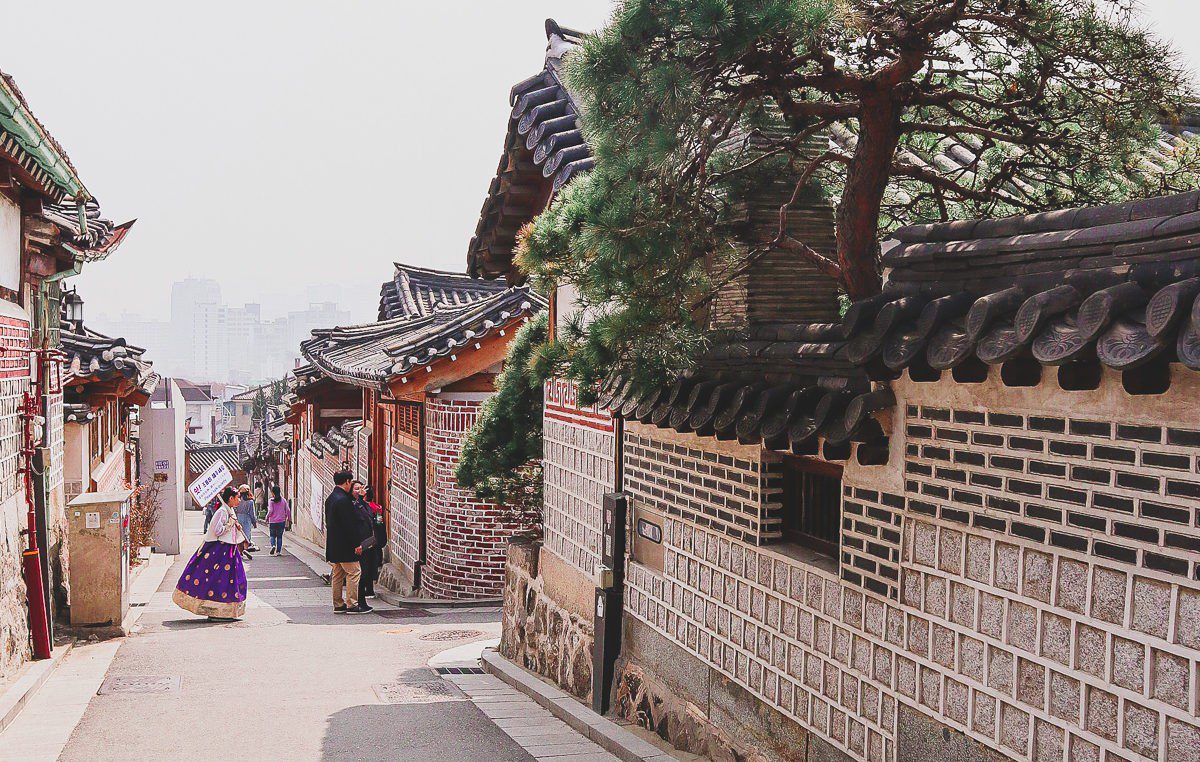 The Korean houses designed like these are called hanok and were built in Korea since the 14th century. How pretty are these rock walls and curvy roofs, aren’t they? 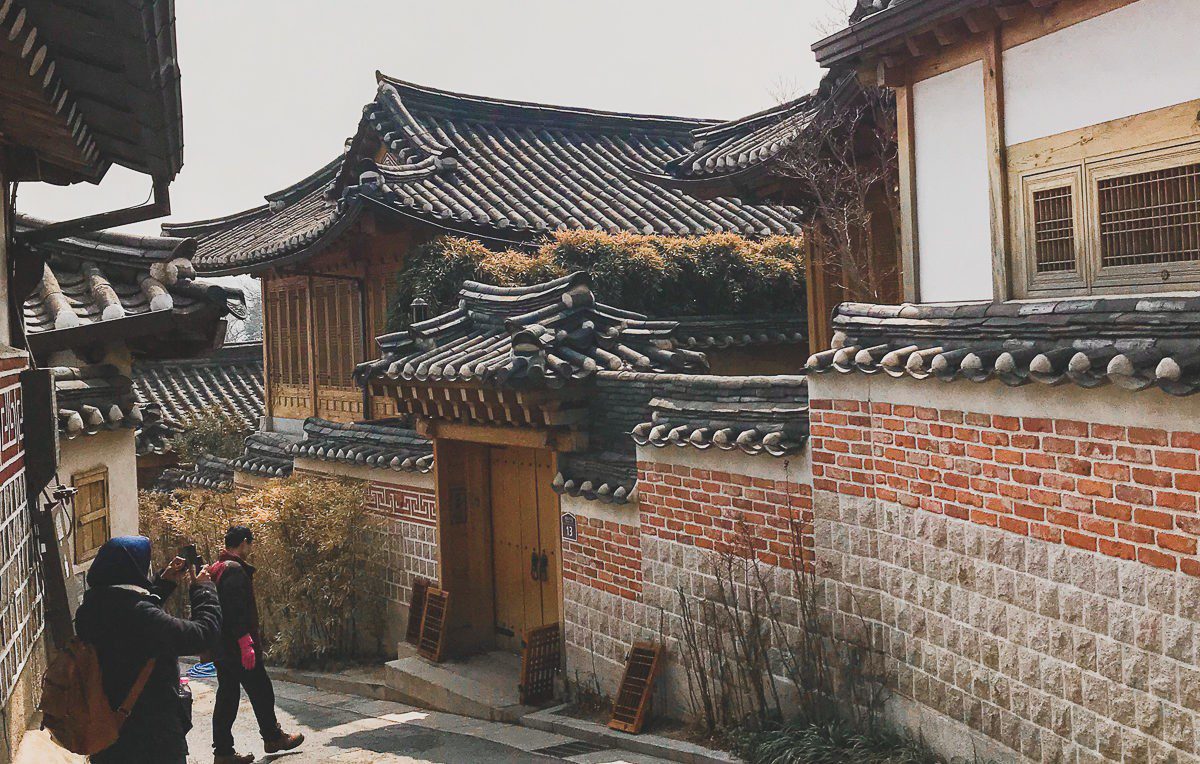 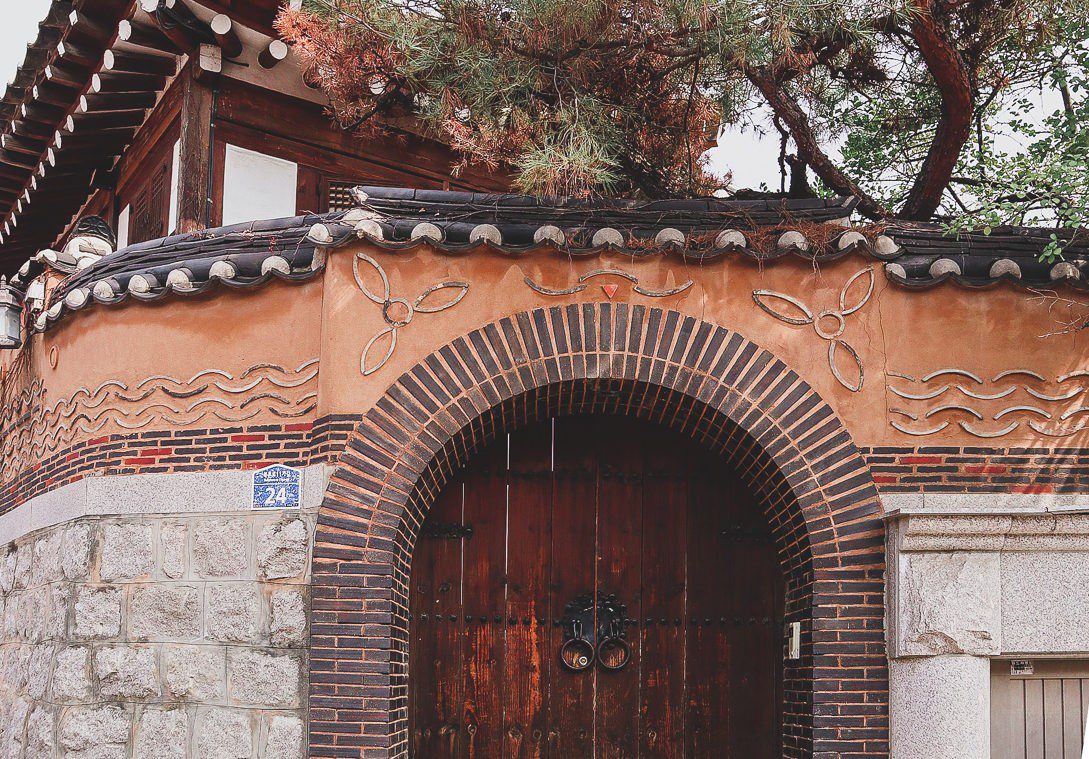 Interesting: The richer families could afford to cover the roof with the tiles while the straw-covered roofs are typical to the poorer households. 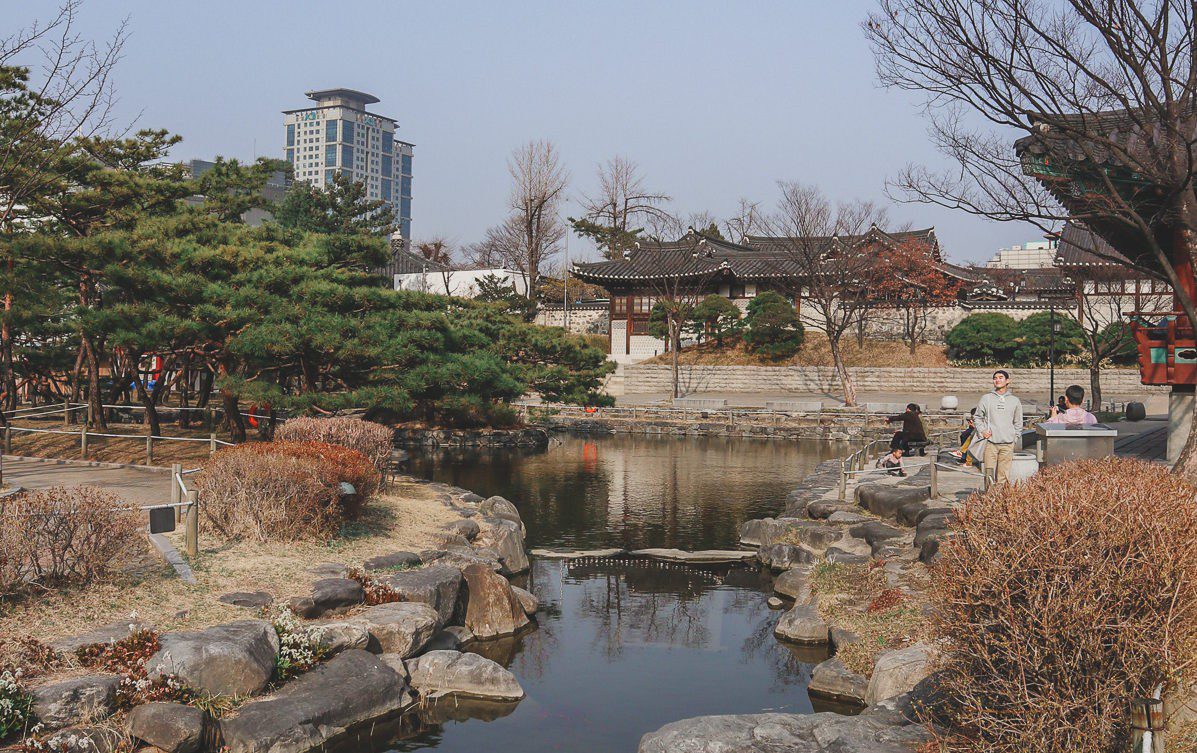 If you didn’t have enough of traditional Korean houses at Bukchon village and are craving for more, please come to Namsangol village. It’s located right at the foot of Namsan mountain (I’ll talk about it in my second post about Seoul!).

Apart from familiarizing yourself with the construction of different houses and daily life of a Korean family of the past you can try a number of activities yourself. What about trying on a traditional set of Korean cloths, playing games, practicing in archery or taking a photo with a falcon?

It’s pretty compact and less busy than Bukchon village so I’m sure you’ll enjoy a stroll around. 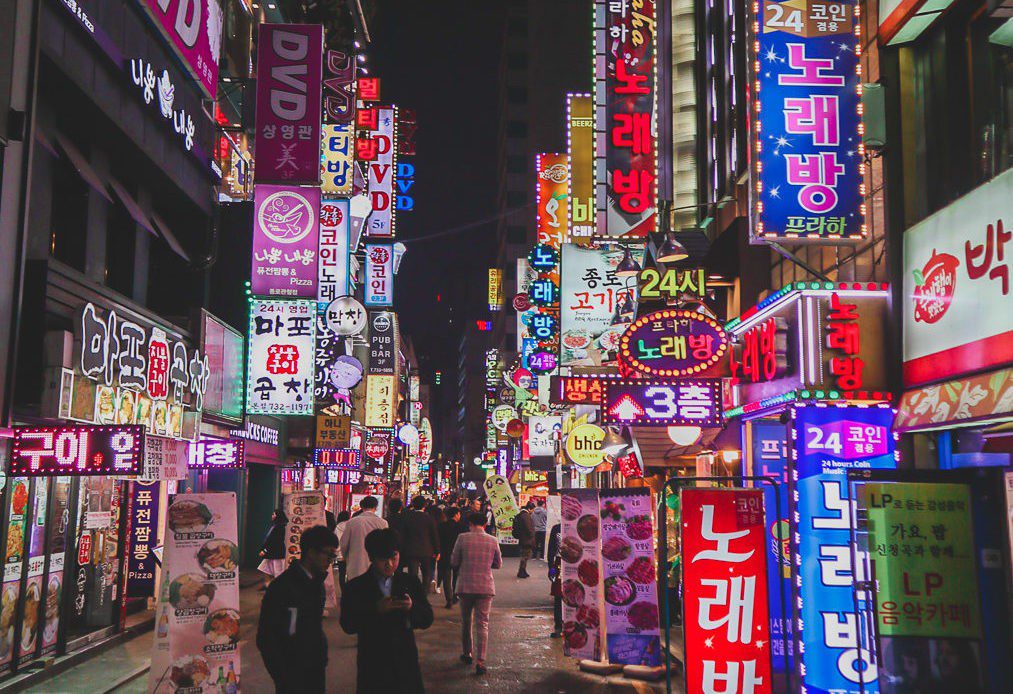 Myeong-dong is a main Seoul destination for many tourists and it has a good reason behind it.

With real vibes of Asian busy market street, street food smells, vertical neon lights, uncountable cafes and shops – all these features you’re looking for are heated to the boiling state at Myeong-dong. 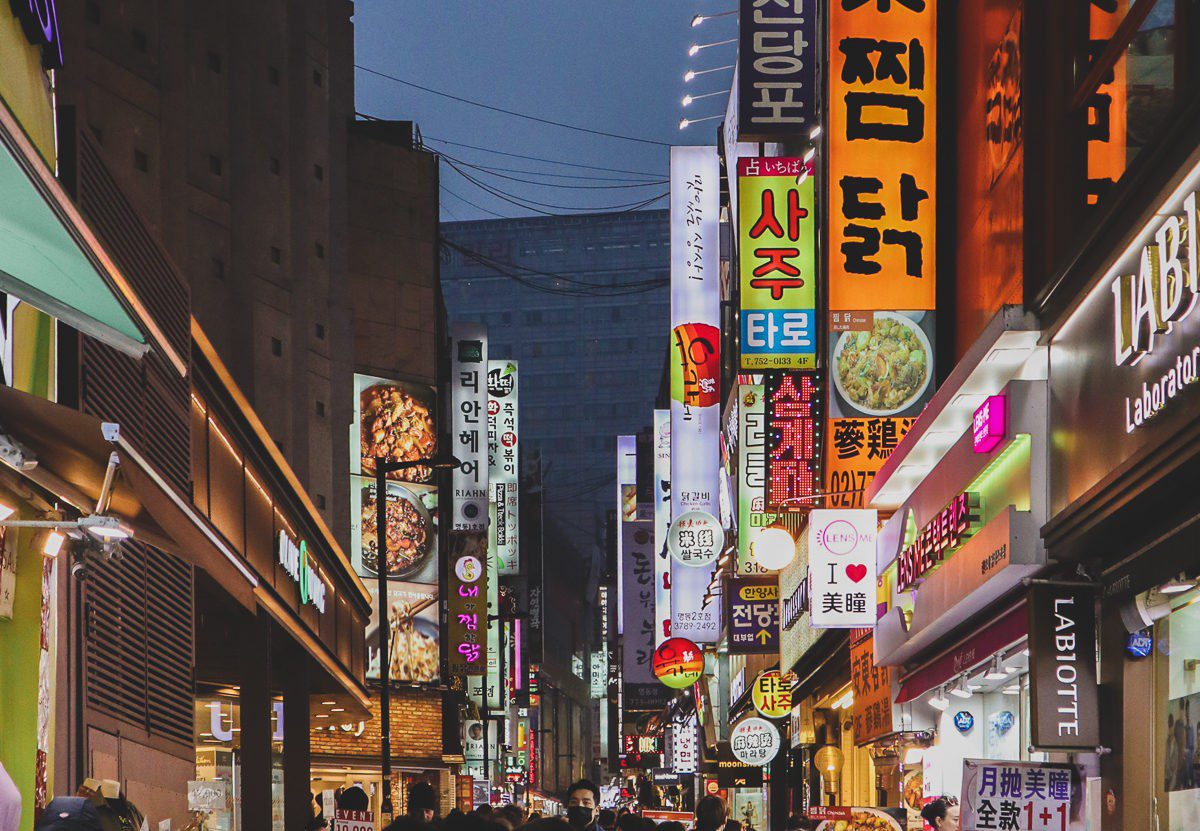 Another Seoul district not to miss is Itaewon. It’s famous for its vibes and a lot of restaurants of any sort of cuisines you may like. 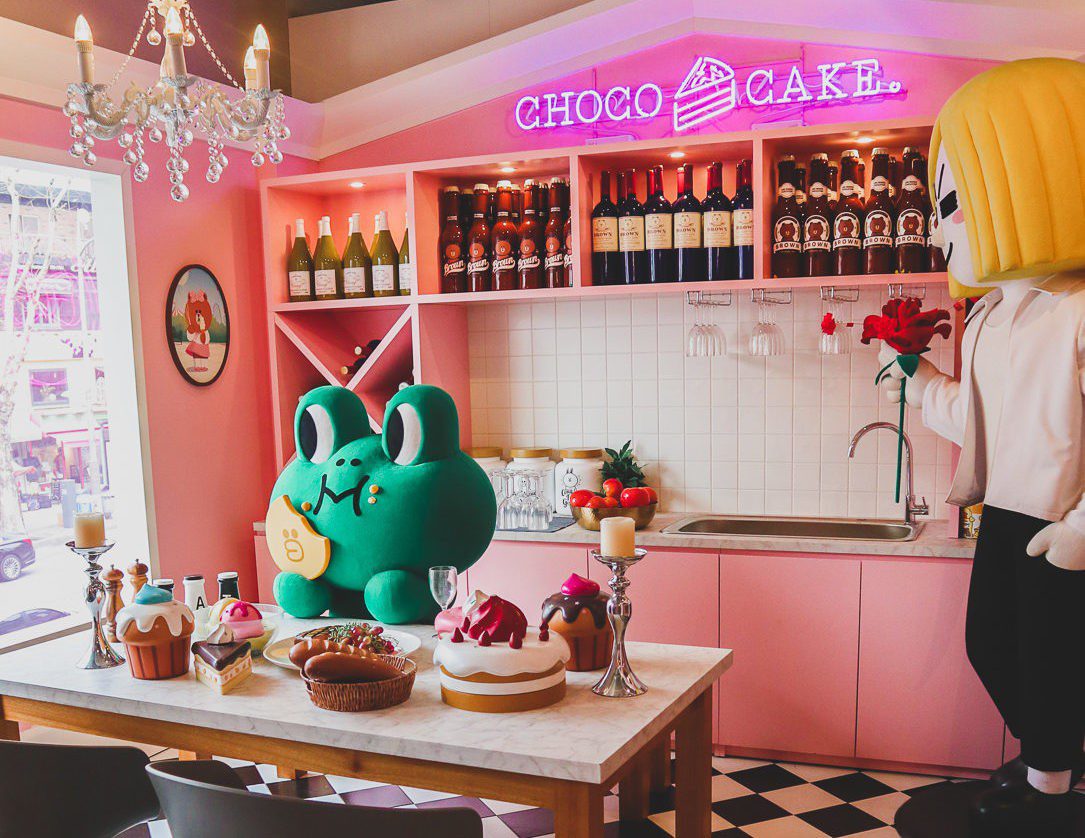 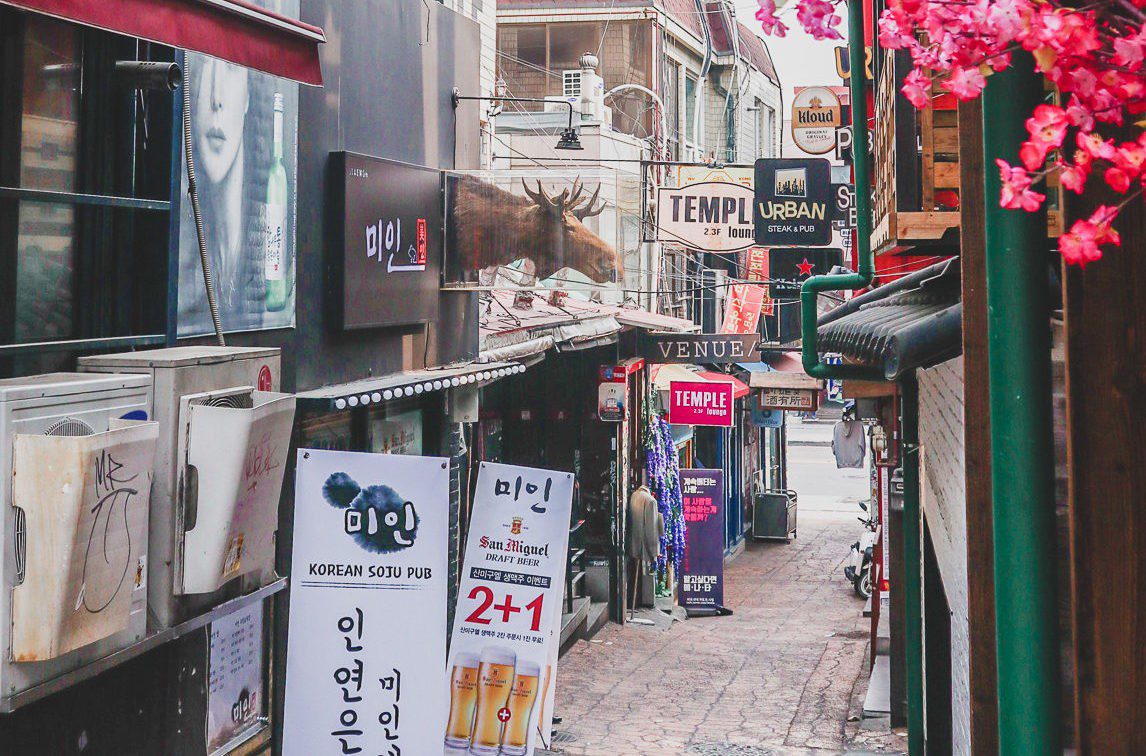 Meanwhile, we opted for the LINE friends flagstore and cafe. I must confess that I wasn’t familiar with these characters before my trip to South Korea but they are irresistibly cute!

Another ecological nod is the Cheonggyecheon stream flowing into the Hangang river at the end. This is actually a natural stream that was located there for centuries but has been converted into the park area just recently. This narrow but lengthy (almost 11 km!) area around the natural spring is a bit lower than the street level around it and contrasts to the concrete jungles around. 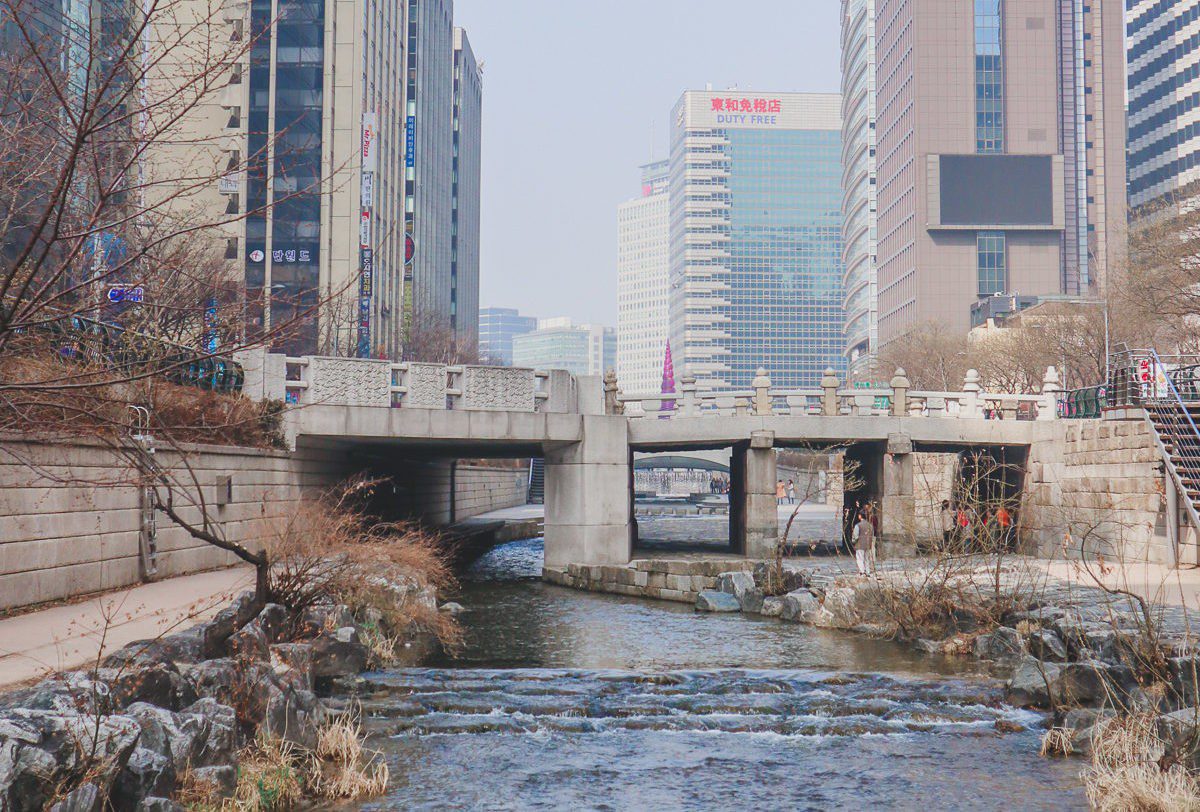 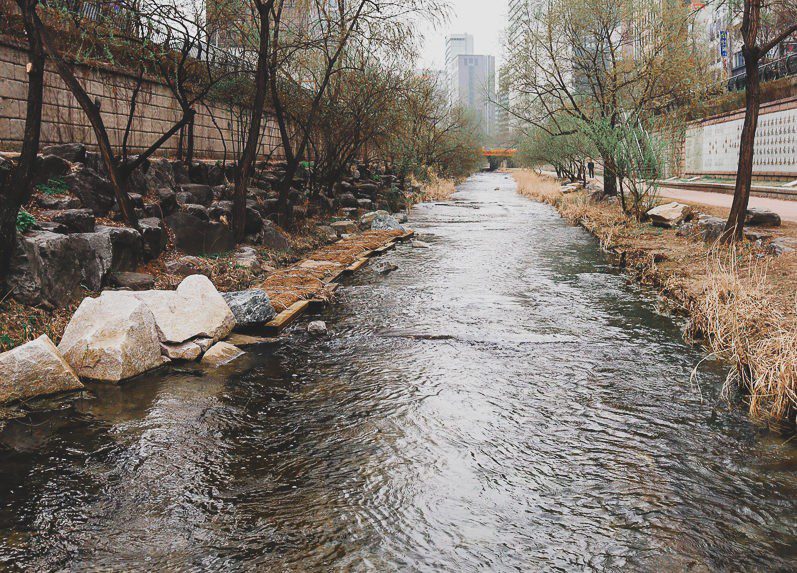 Cheonggyecheon stream turned out to be a nice place to rest and to walk along – and many historical and cultural notes on the walls kept us from getting bored! 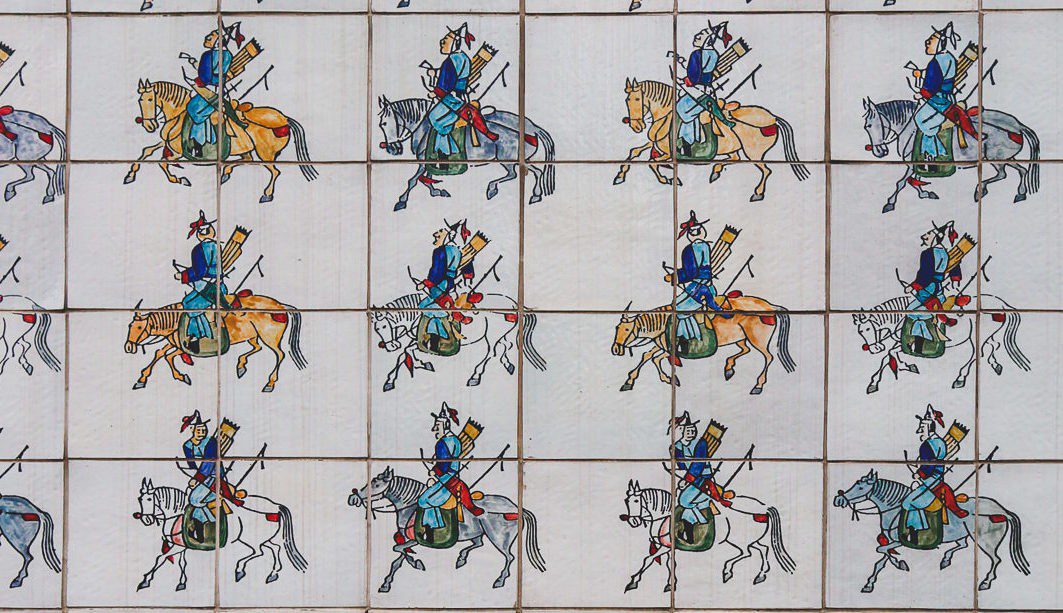 Town hall is not usually a kind of building you’re recommended to pop in to but the Seoul Town Halls are definitely not ordinary Town Halls (on the right on the pic below)! 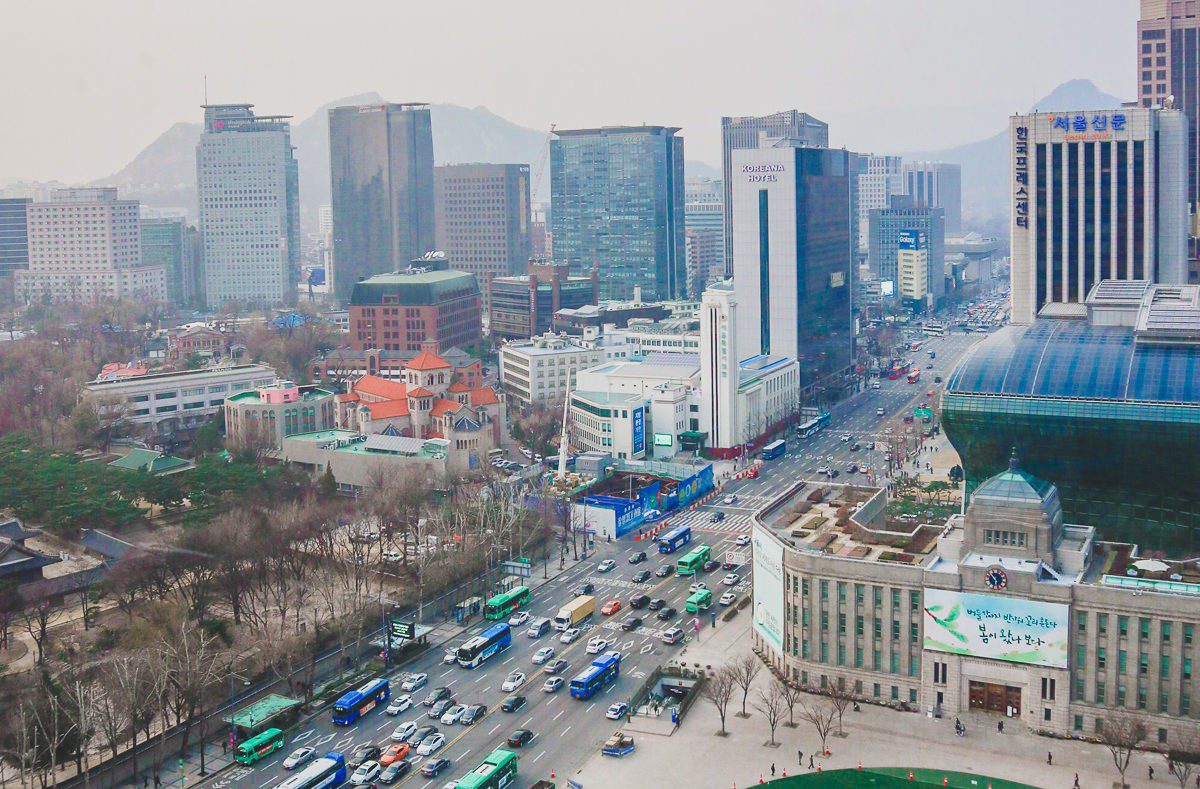 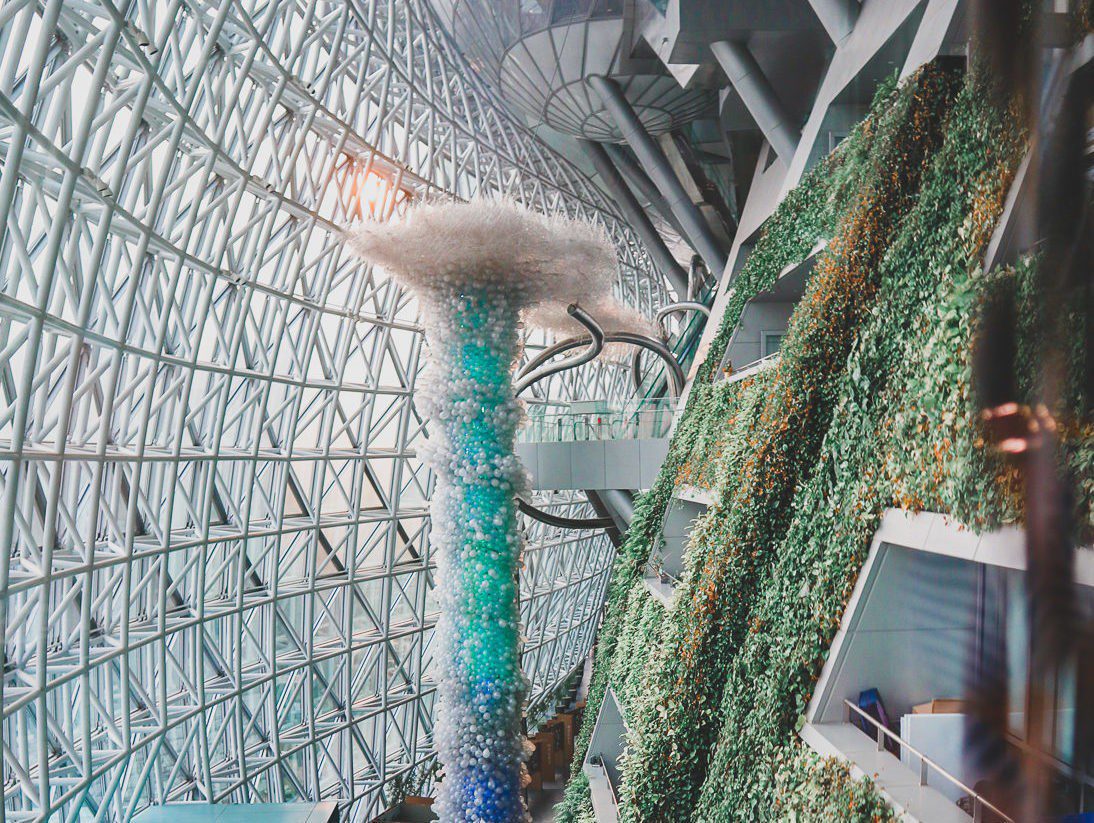 Actually the former Town Hall is adjacent to the new one built recently.

Although you might associate Seoul with something exceptionally modern, it’s not like this. In my experience, there are patches of futuristic spaces with skyscrapers but the latest scientific technological advances get lost in a rather poorly looking small houses and rural streets that almost take us back to the time of Korean war.

It is fascinating how those well known modern areas of Seoul – products of the Korean Economic Miracle – contrast with the rest of the city, which is vivid but far less westernised, grayer and more akin to its poorer SouthEast-Asian neighbours than to those rich cities lying to the west of the Korean peninsula.

But this mix is exactly what makes this city special because it hints at Seoul’s history and on what South Korea becomes now! So I would definitely recommend you to explore non-touristic Seoul as well.

Foggy and steril, futuristic and traditional, busya and calm… It’s all about Seoul!