Korean history is rich in stories and events, victories and tragedies, invasions and restorations. Nothings reflects it better than the architecture – being made out of wood, it’s easier to burn them down to ashes and to rebuild them in original form later on. 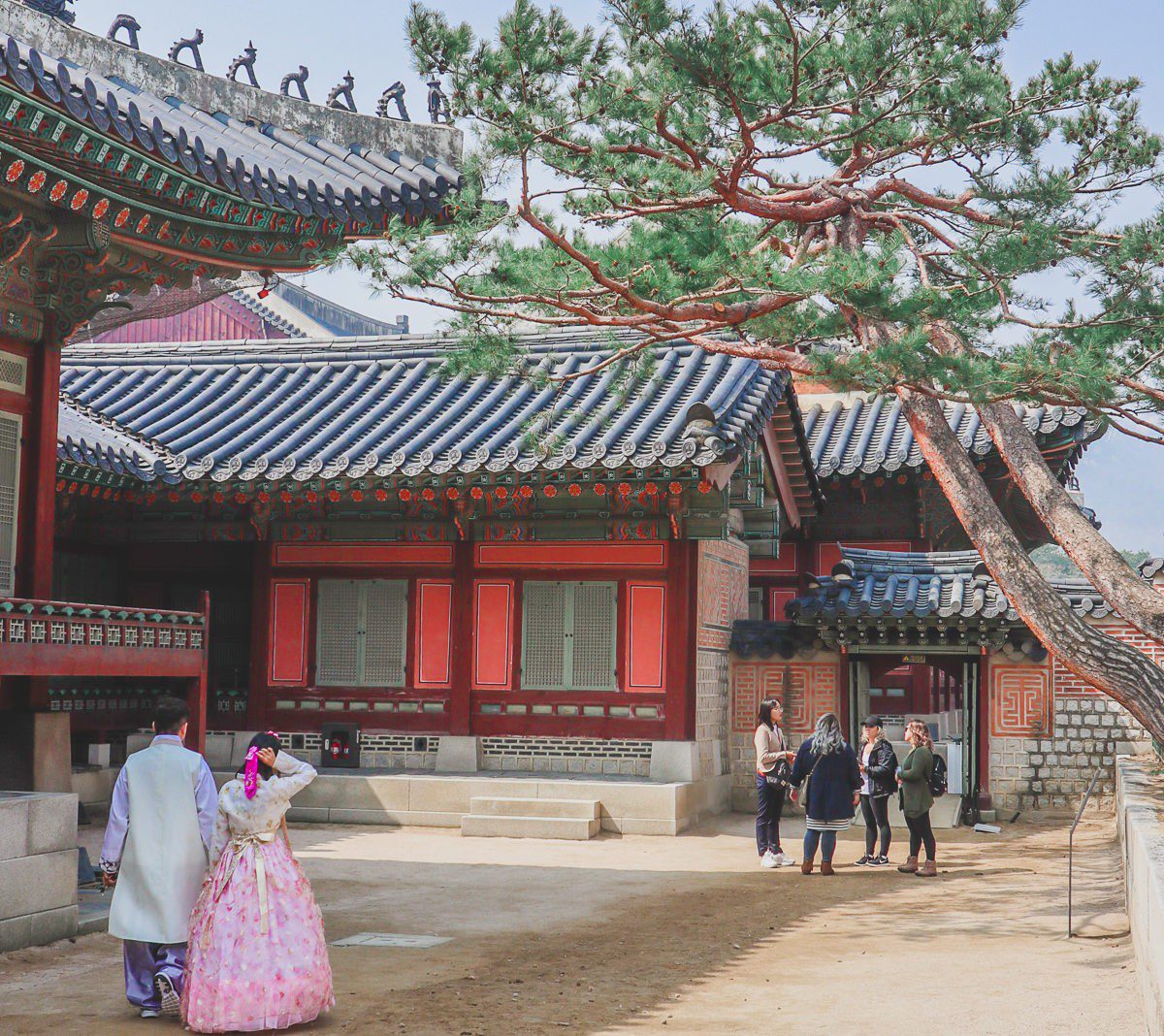 This blogpost is dedicated to Five Grand Palaces of Seoul built during the rule of Joseon dynasty. There is a distinct story behind each one but all have undergone demolition and destruction at some point of their history (or even at multiply points) and final reconstructions are under way right now. 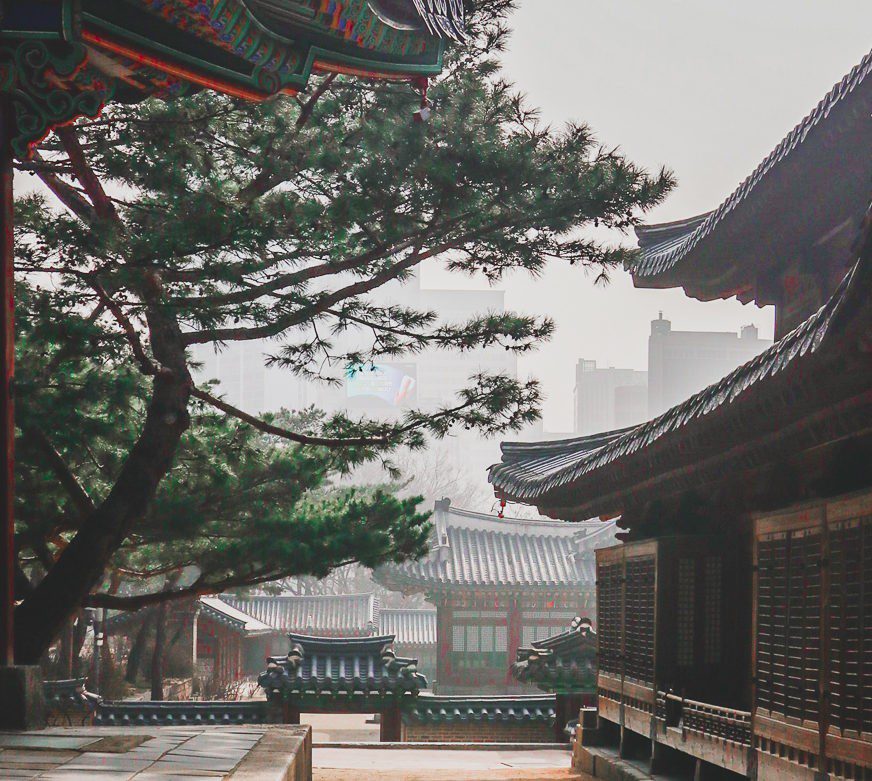 When visiting the capital of South Korea, make sure you visit at least a couple of them! 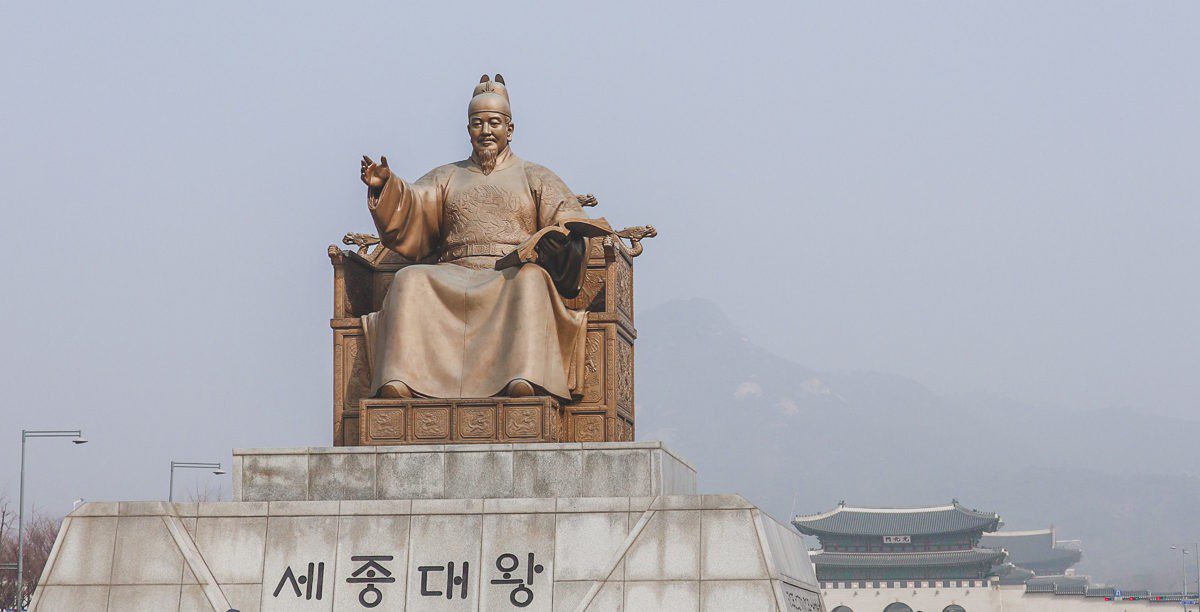 There are five Grand Palaces: Gyeongbokgung, Deoksugung, Changdeokgung, Changgyeonggung and Gyeonghuigung.  The main feature of Asian architecture is that buildings are made using wood and therefore are less durable than the stone ones. Consequently, the majority of the edifices you would see are the exact, but modern versions of original constructions. 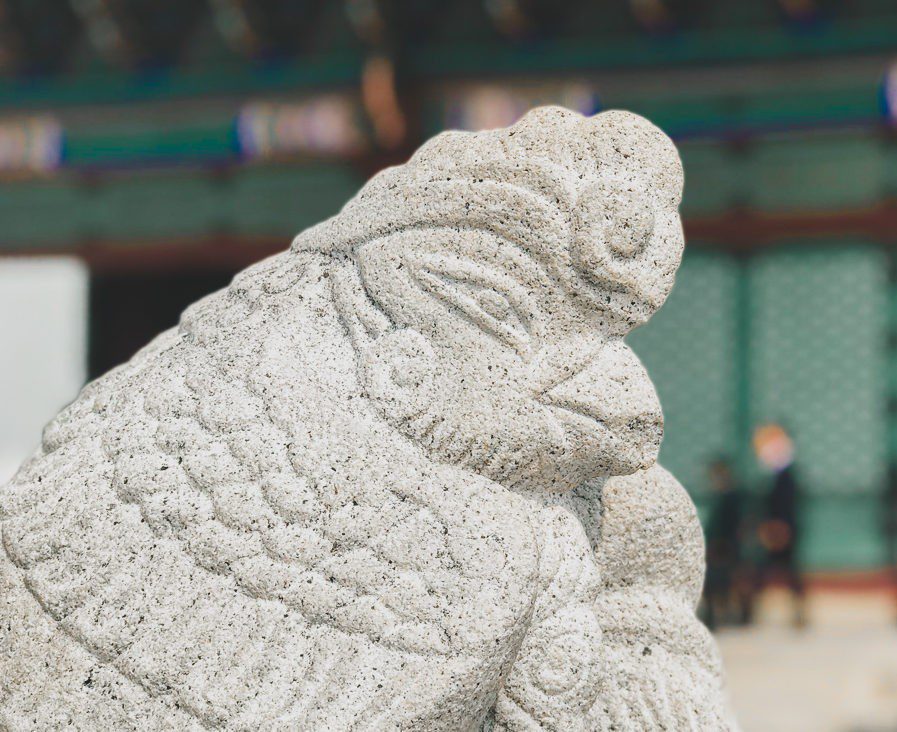 As I’ve already mentioned in my first blogpost about Seoul, you can save a lot of money and time by buying a combined ticket to several palaces and Jongmyo Shrine. I’ve also heard that if you wear hanbok, traditional Korean clothes, you can enter into some places for free but I haven’t tried it myself 🙂 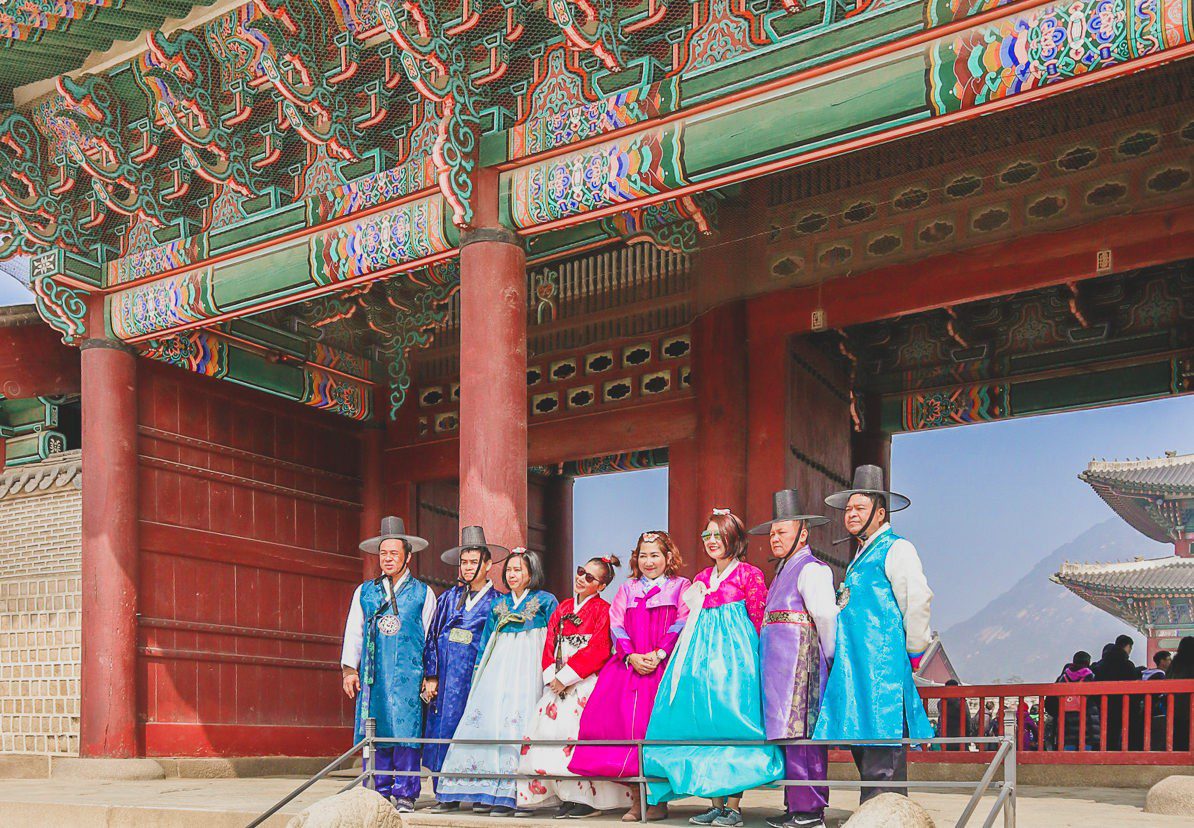 Gyeongbokgung Palace of Seoul, or the Palace greatly blessed by Heaven 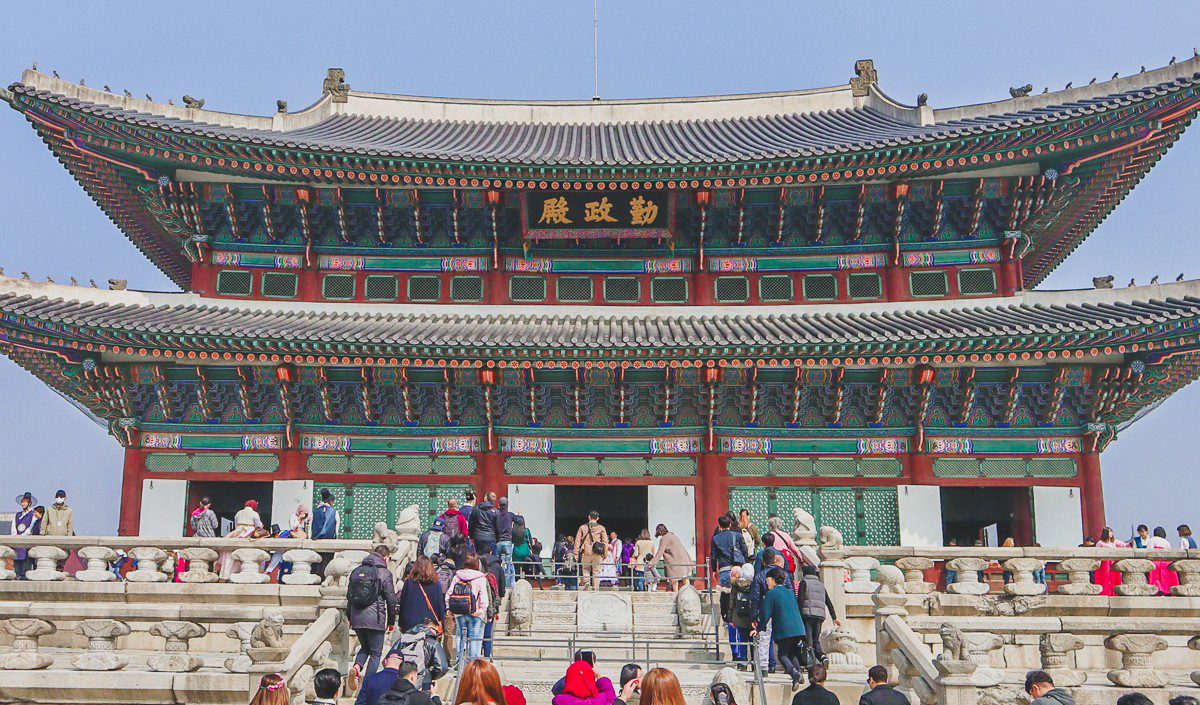 Gyeongbokgung Palace is a complex of multiple buildings residing at mountain foot and is a Mecca to all the tourists. It served as the main palace of Joseon dynasty since 1395 for over two centuries.

Then it was burnt down to ashes in 1585 during the Imjin War and was restored in the 19th century. Its condition was miserable during the Japanese presence in Seoul and during the Korean War because many buildings of the palace complex were deliberately destroyed! 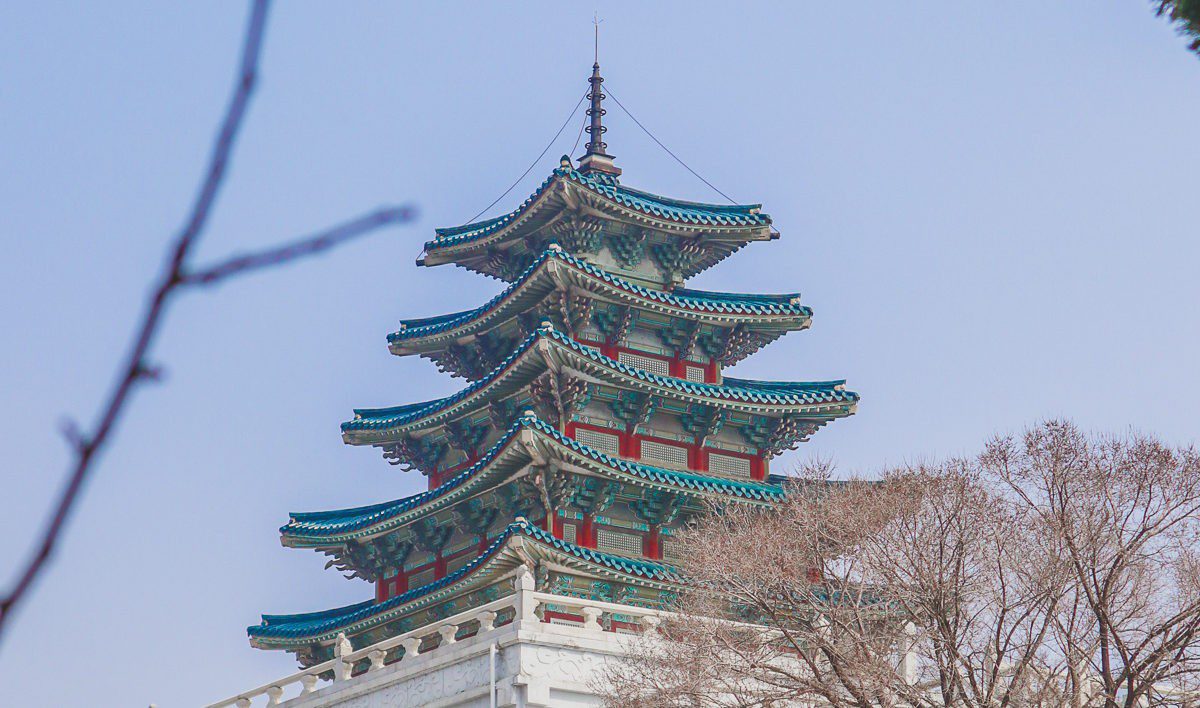 This pitiful situation continued for the most of the 20th century. Finally the restoration works started in 1990 and some buildings are still under the reconstruction. But it won’t prevent you from admiring this place! 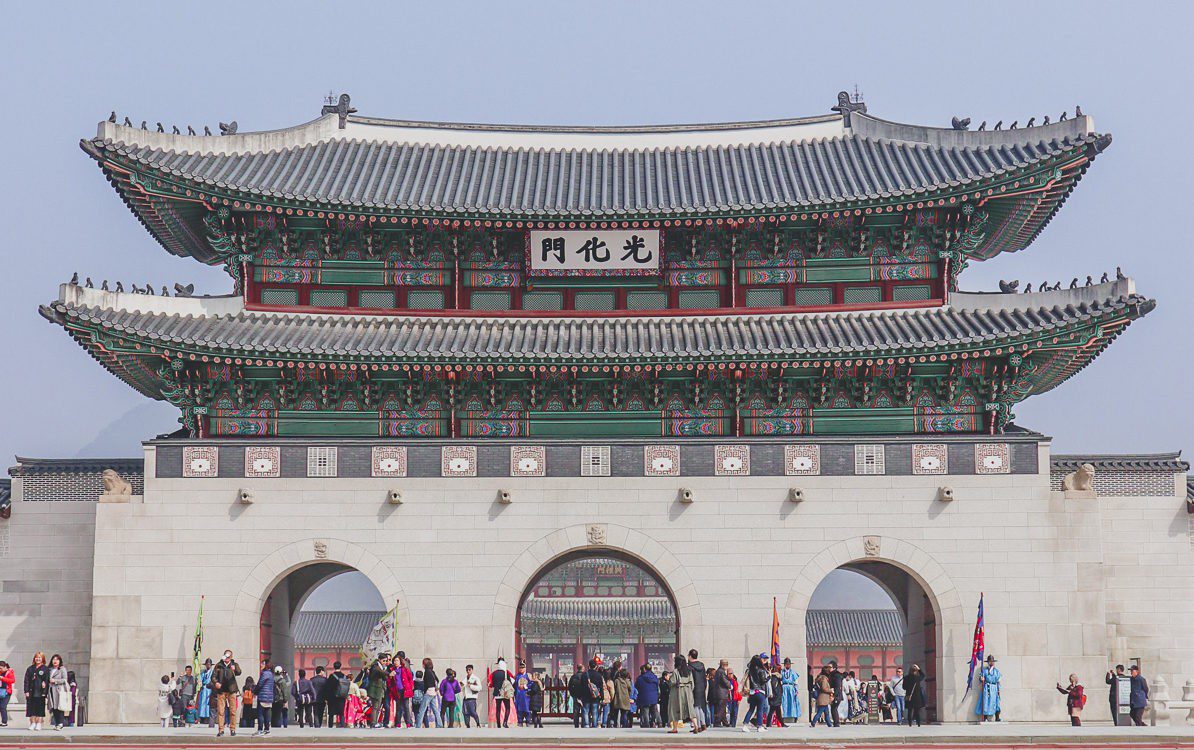 Don’t miss Gyeonghoeru Pavilion and Hyangwonjeong Pond with a hexagonal pavilion of the same name inside the Gyeongbokgung Palace.  These are the National treasures of South Korea. Hyangwonjeong Pavilion was under reconstruction during my trip. 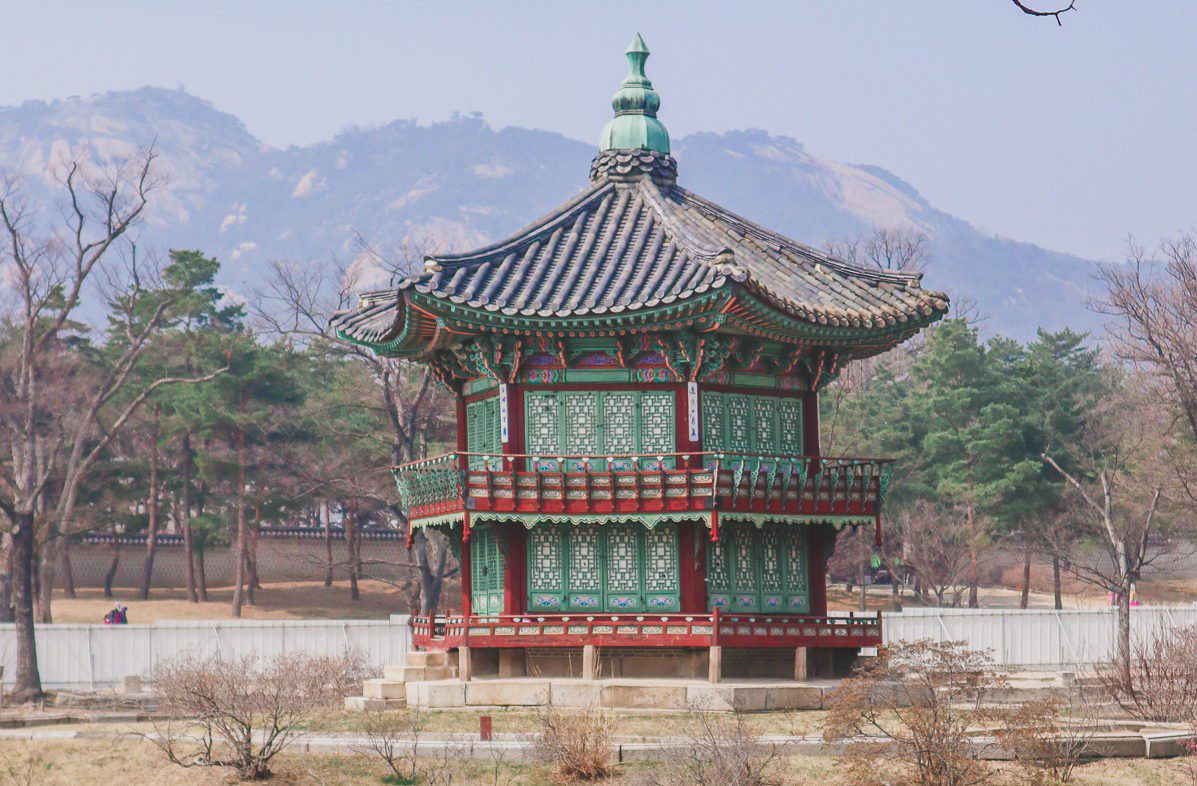 Gyeonghoeru Pavilion was even placed on the old 10.000 won banknote! First pavilion was built in 1412 and the current version remained almost intact after the Japanese invasion which is a really rare case because many buildings were destroyed. Its construction symbolises several ideas: of heaven, earth, man, and time. It’s one of the most beautiful places I’ve ever seen, honestly. 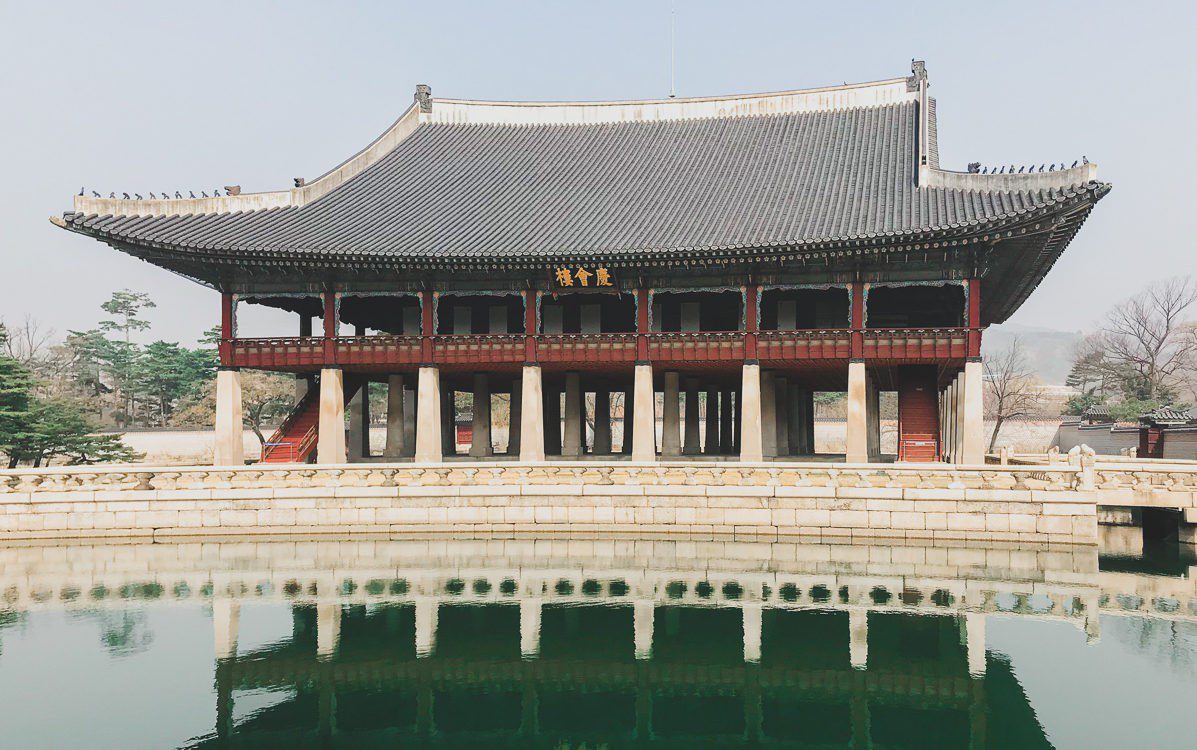 Tip: a Royal Guard-Changing Ceremony is a must-see when in Seoul! 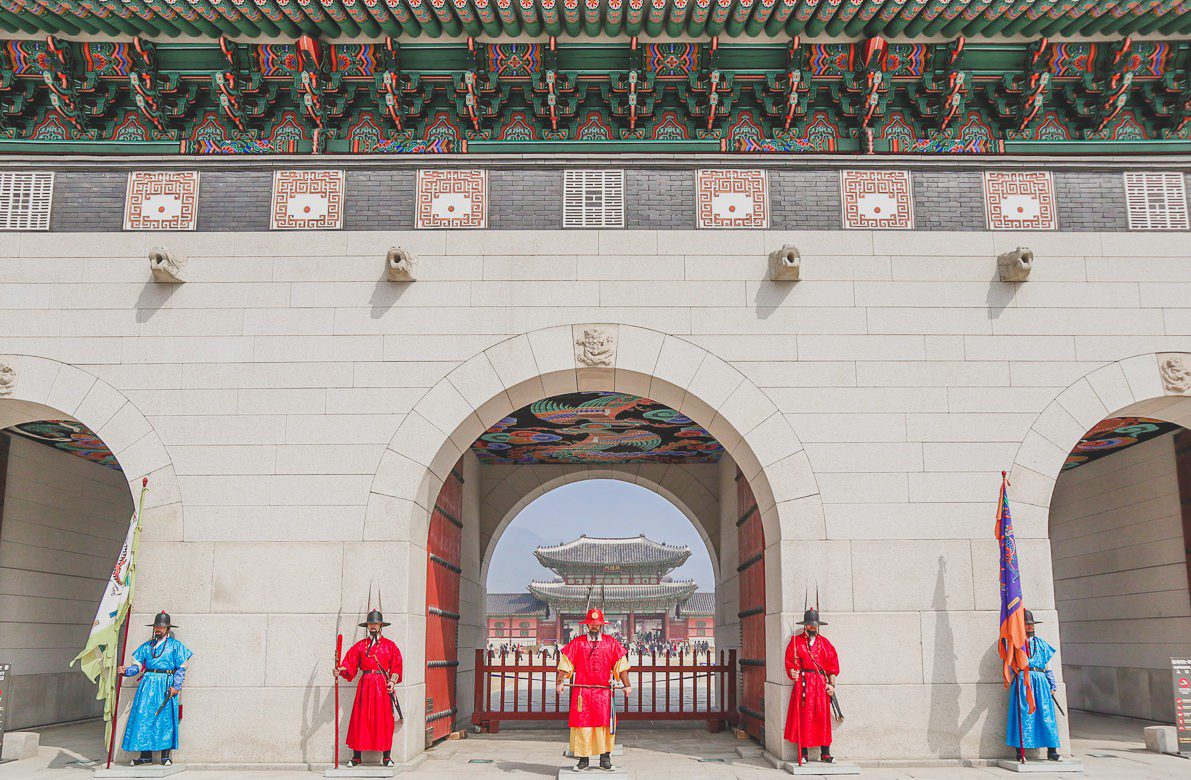 It takes place in front of the main gate Gwanghwamun every hour – please see the exact timetable on their website.

Changdeokgung Palace, or the Palace of Prospering Virtue

The instability and political tension inside the Royal family led to the construction of the Palace of Prospering Virtue which was built at the beginning of the 15th century as a second palace after Gyeongbokgung. 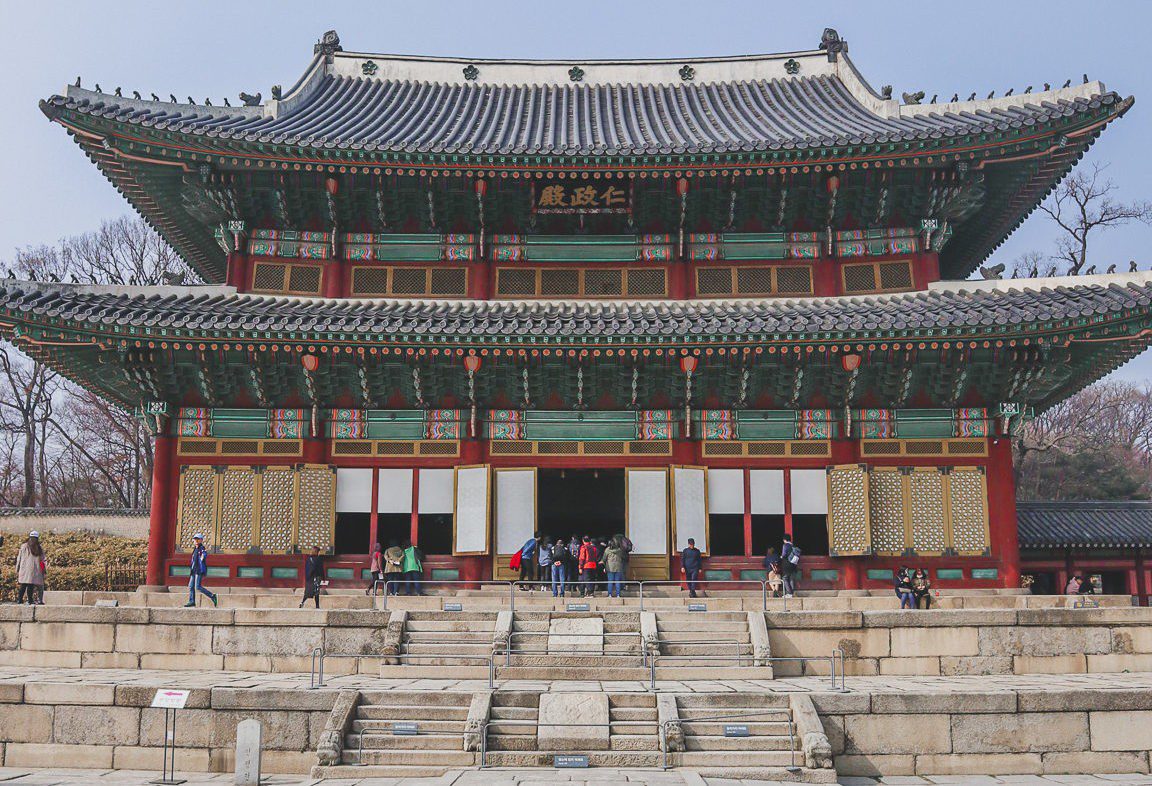 The second and the last emperor of Korea also lived and died here as was well as other members of royal family who were permitted by the new government to stay at Changdeokgung Palace. 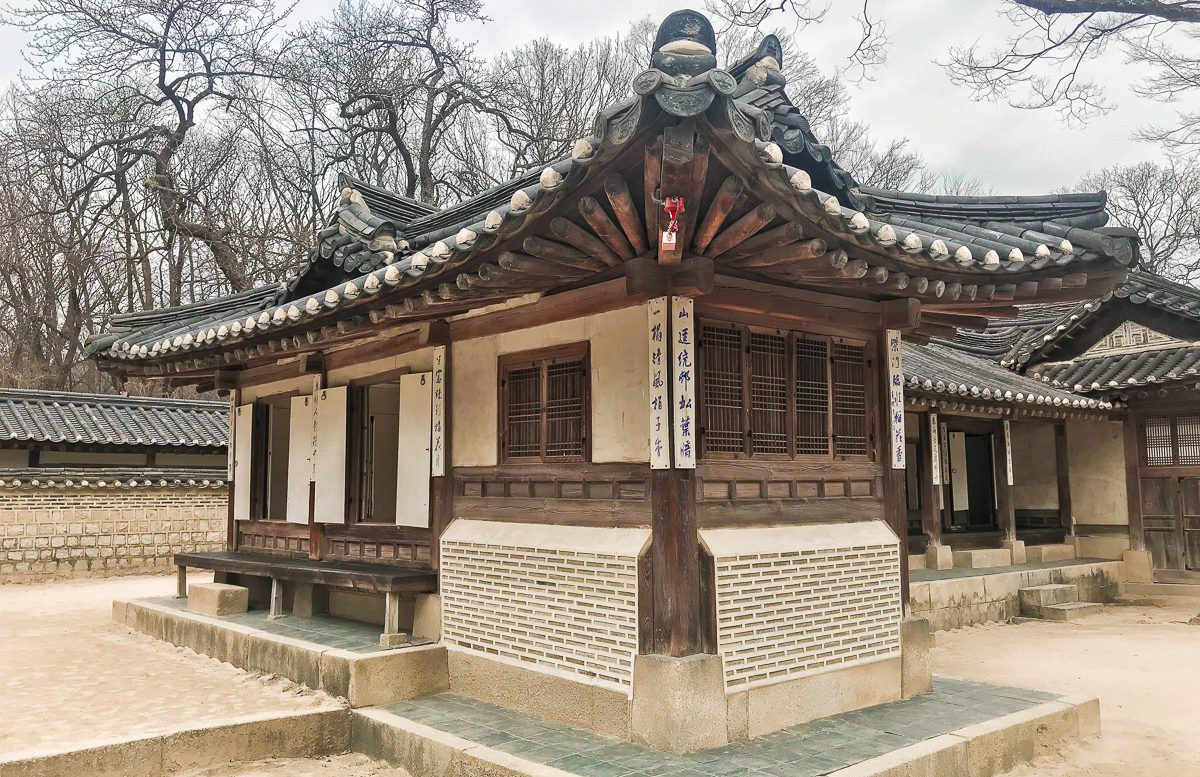 Now its territory is rebuilt and looks adorable! Apart from other gorgeous buildings, it contains the oldest bridge in Seoul called Geumcheongyo Bridge built in 1411. 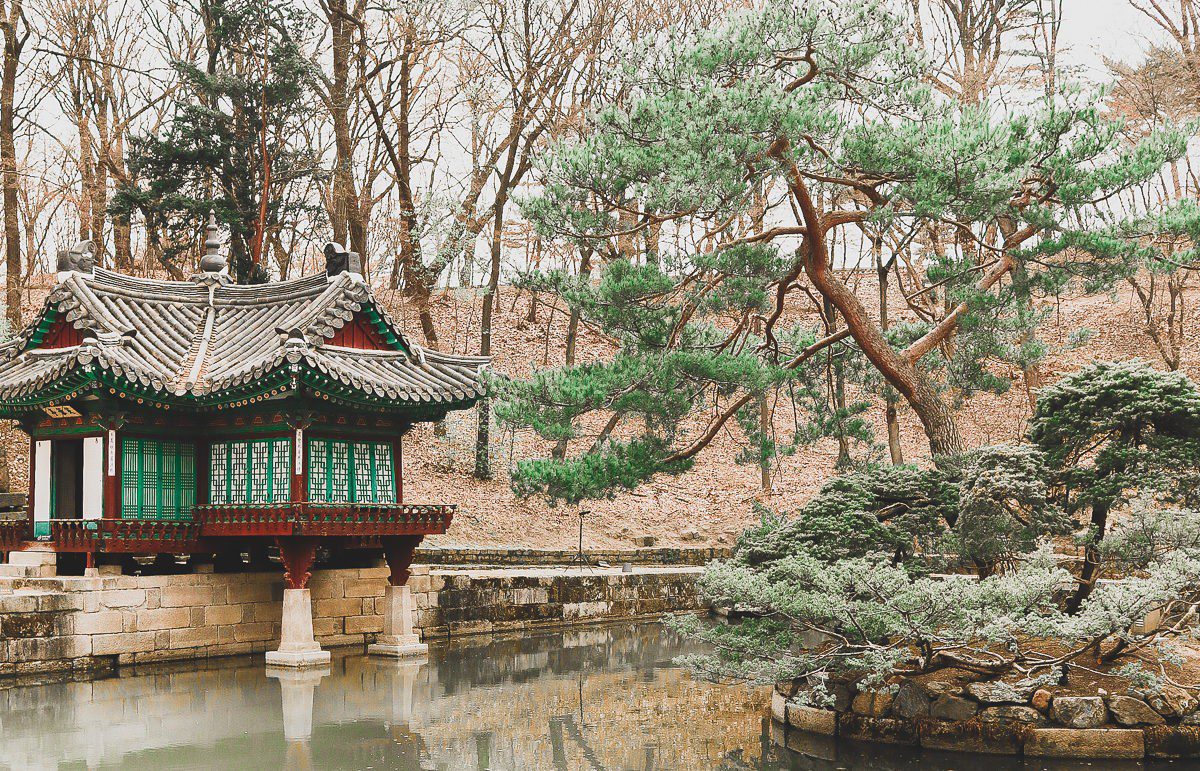 Another treasure of this palace is Huwon, or a Secret Garden which was used privately by the king. 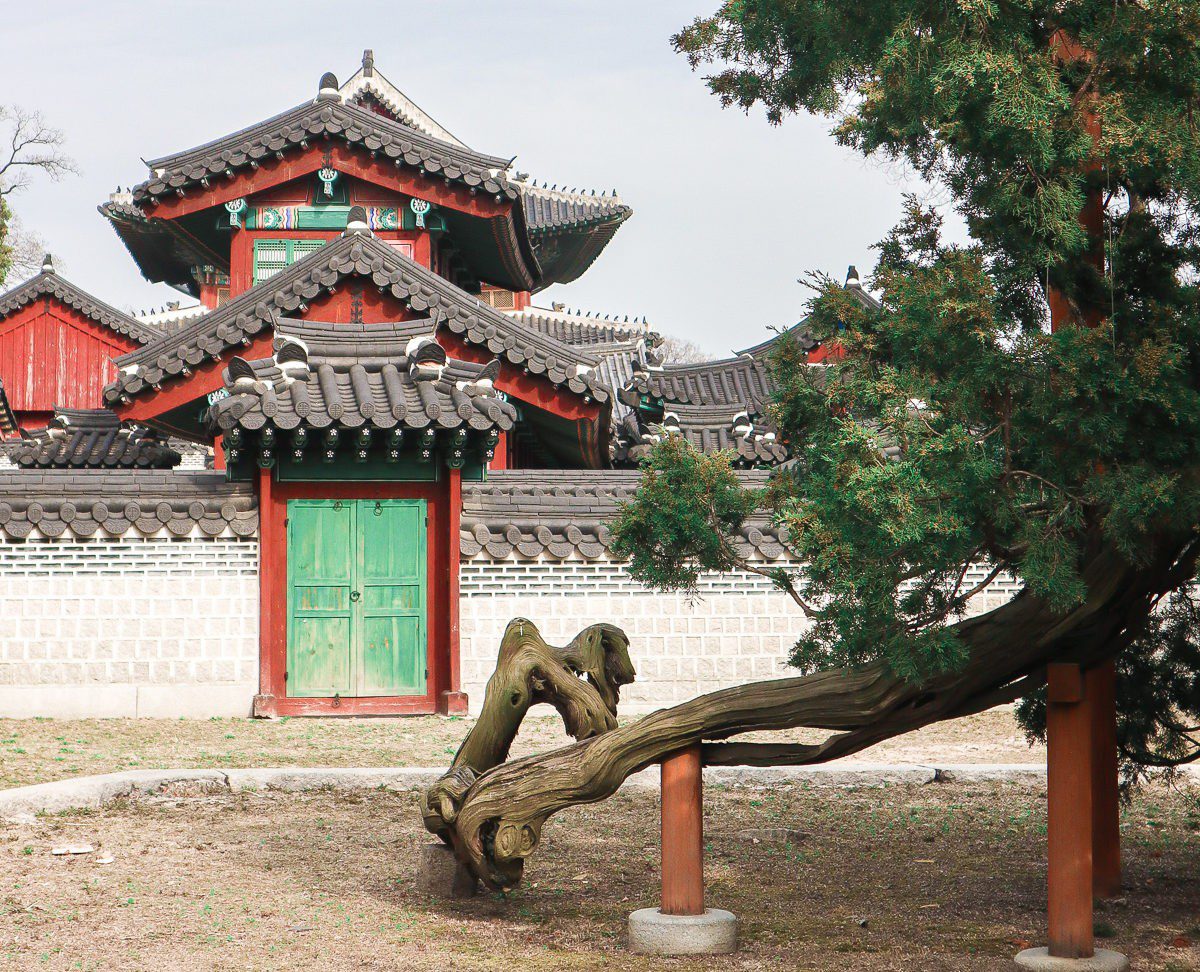 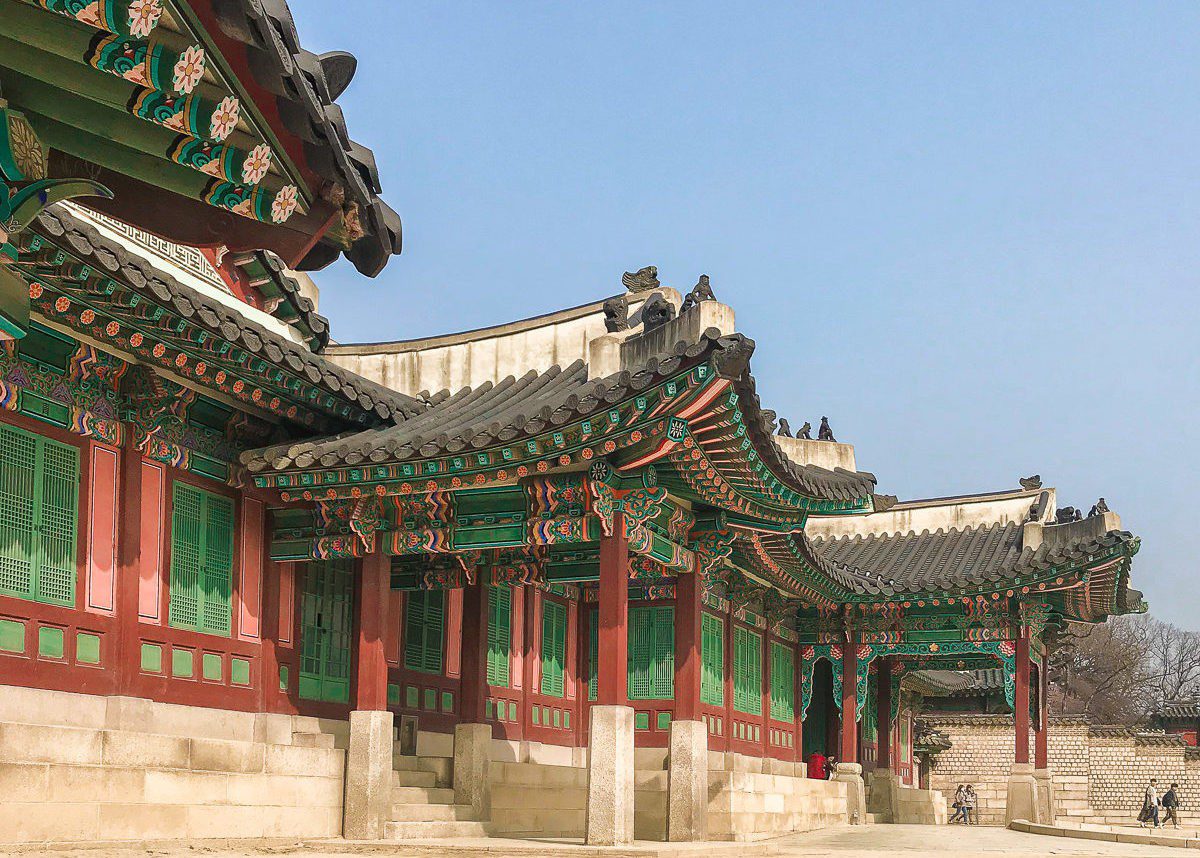 Suganggung Palace was built in 1483 and underwent some enlargements later whilst taking his current name of Changgyeonggung. The zoo was located in here during the Japanese occupation (the zoo now resides in Seoul’s Grand Park) and it is now regaining its royal appearance. Palace’s ponds are truly lovely! 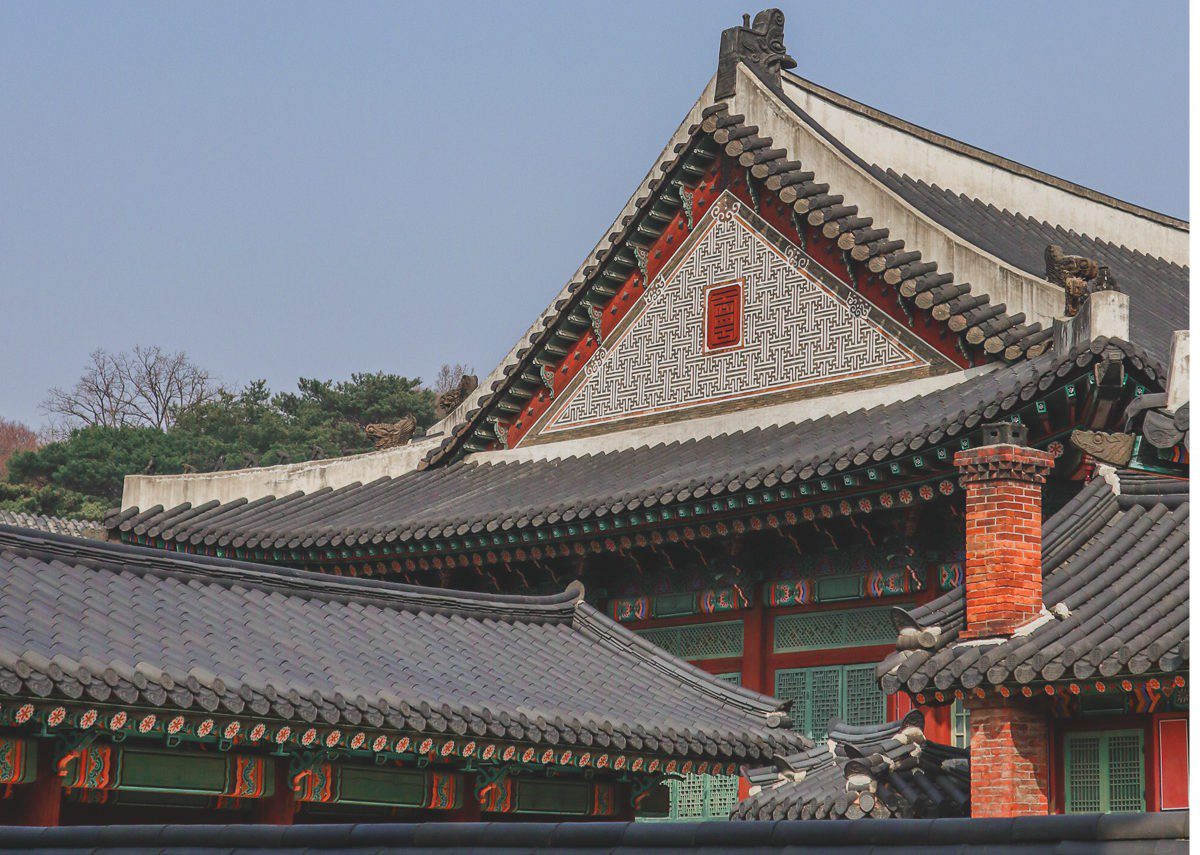 It’s adjacent to Changdeokgung Palace so it won’t take long to visit both palaces at once. The entrance is close to the gathering point for the guided tours to the Huwon Secret Garden. 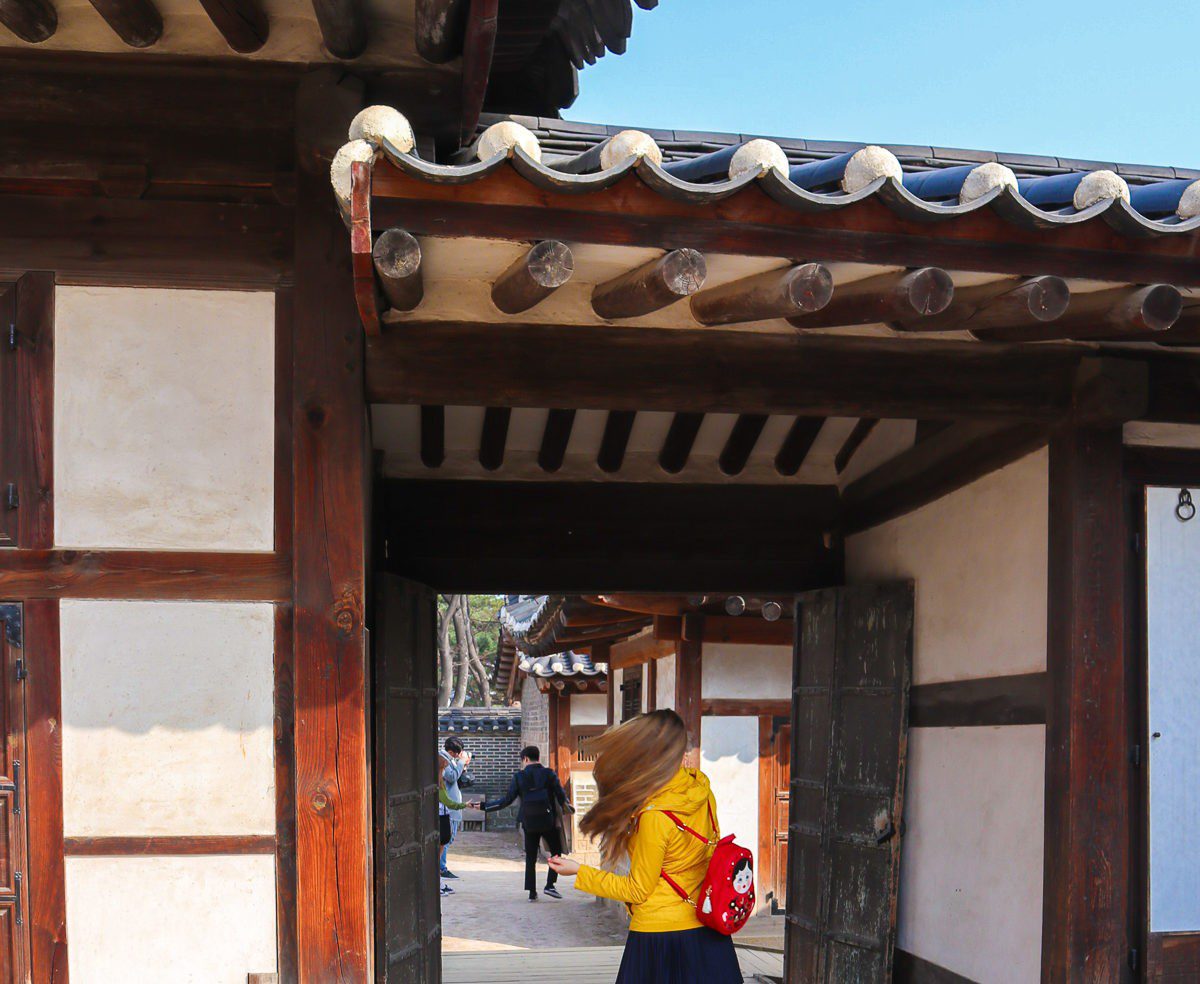 Interesting: Dancheong, literally translated as green and red, is a traditional way of painting wooden surfaces with bright colours – both for decoration and protecting it from damaging factors of the environment. 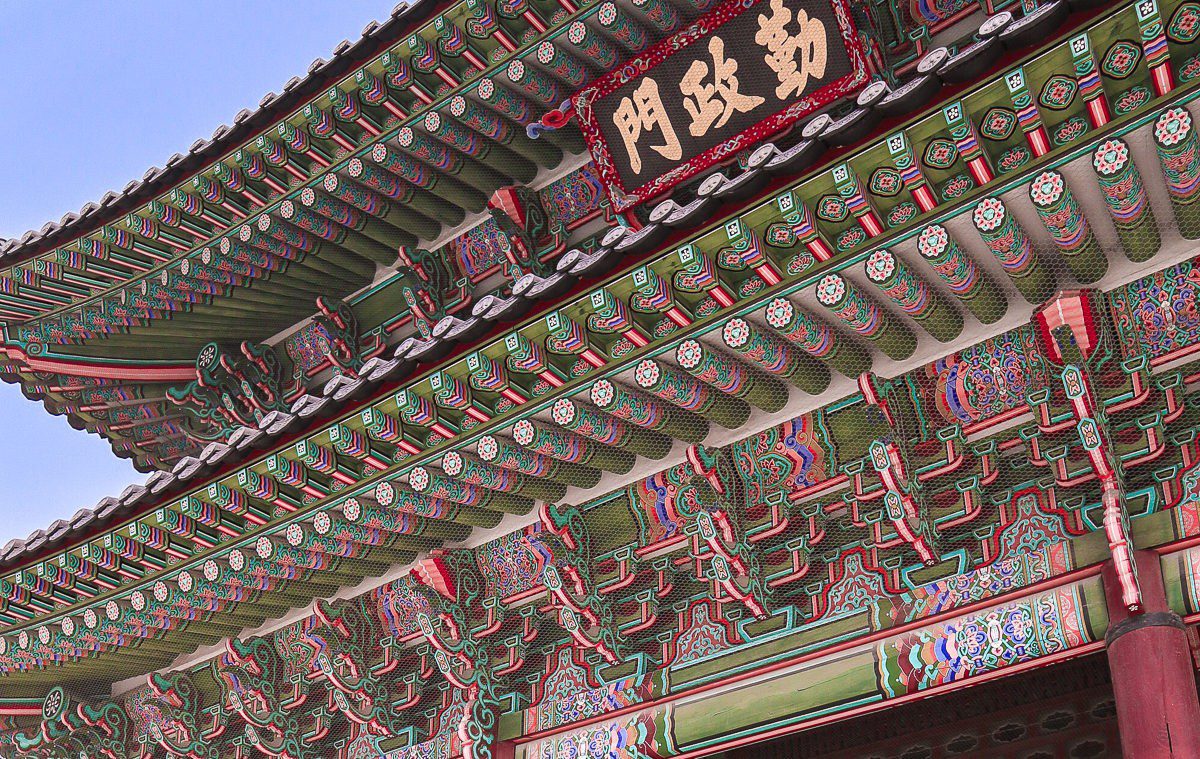 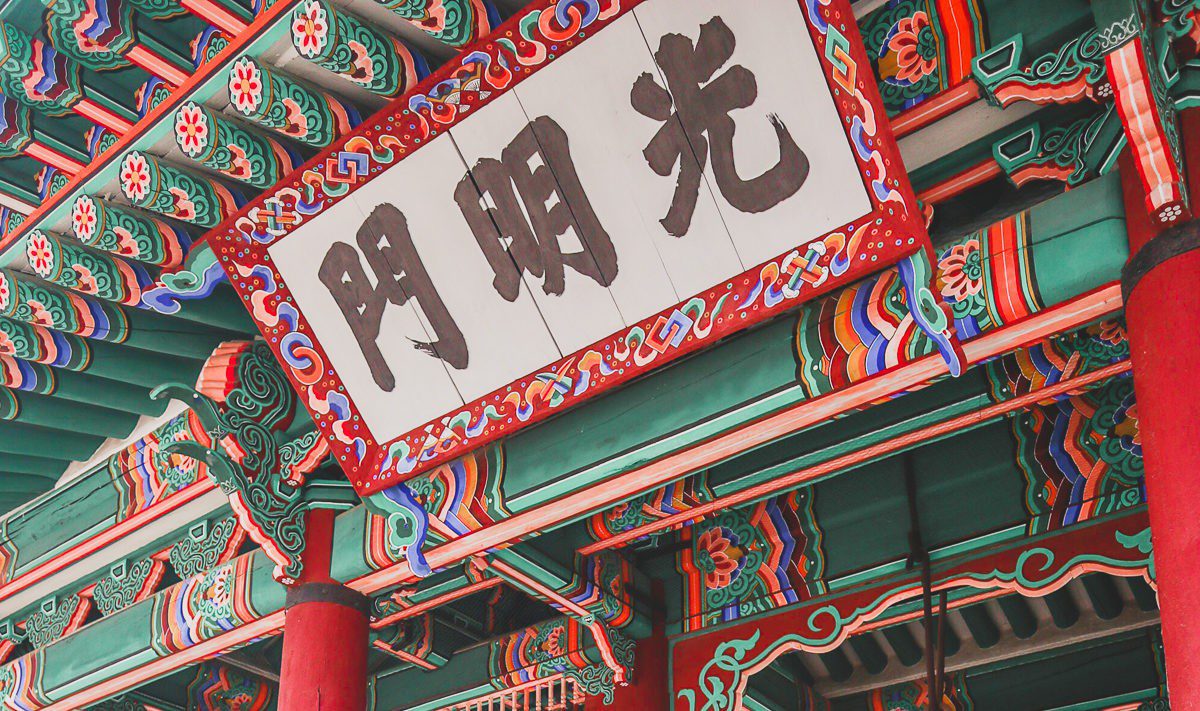 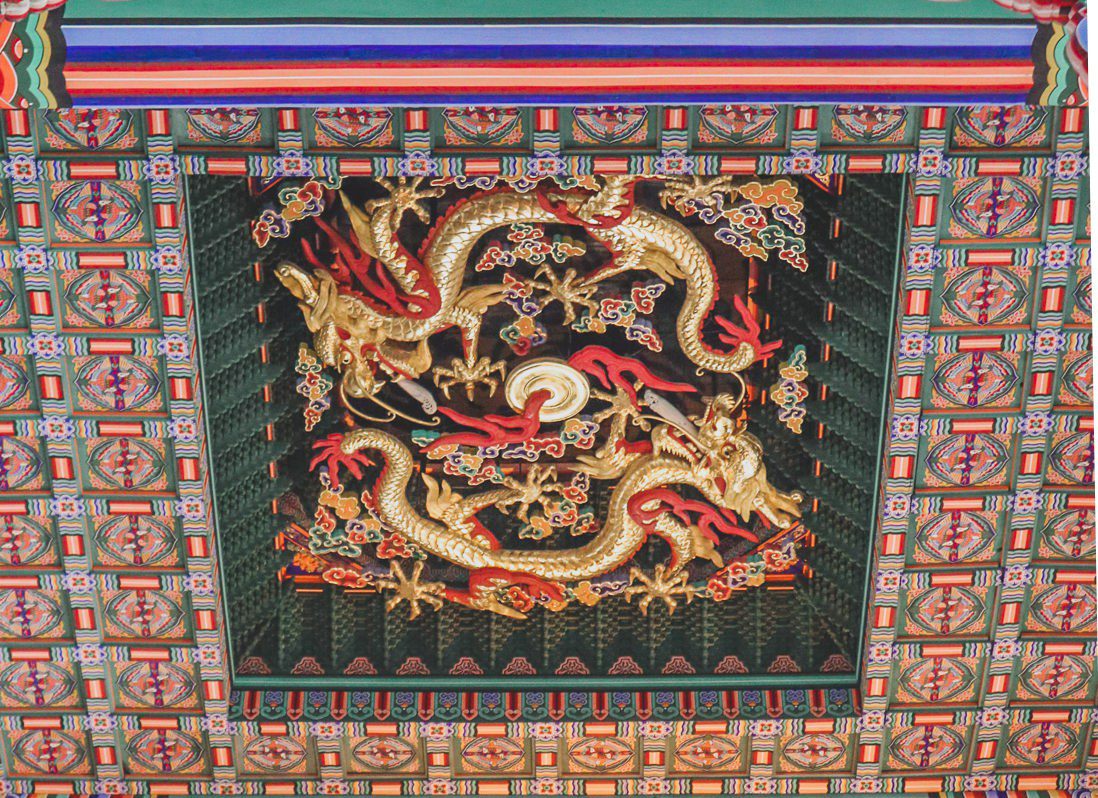 The resulting pattern is vivid, symmetrical and, again, symbolic. I was deeply impressed by the architecture of Korean palaces as I’ve never seen anything similar to them! Just look how pretty are these coloured walls and curved roofs!

Deoksugung Palace, or the Palace of Virtuous Longevity 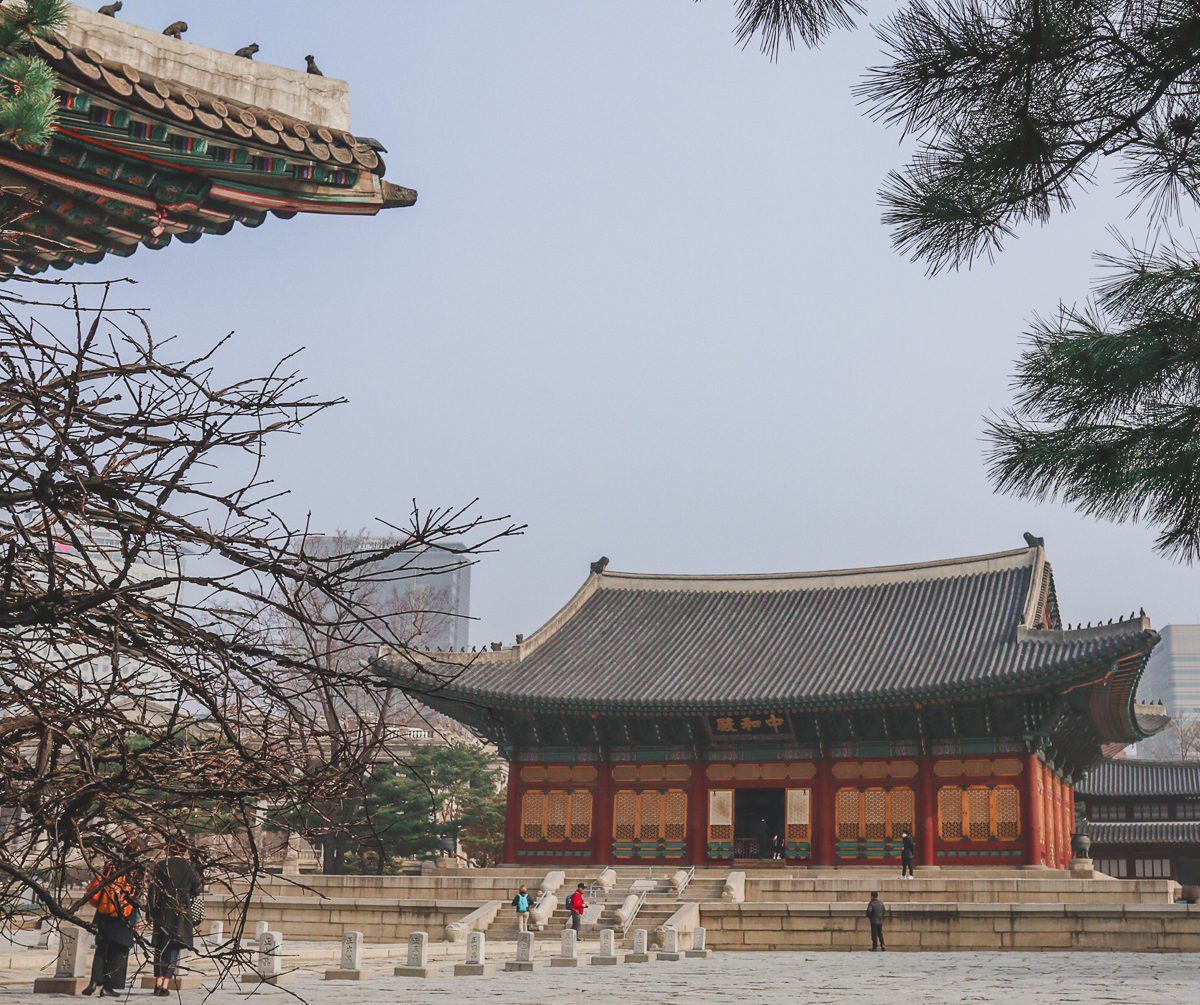 Deoksugung Palace was the first palace I was introduced to because we stayed in a hotel nearby. I was more than impressed by its tranquility  and serenity in the early morning, with just a few tourists and a foggy air stealing the skyscrapers of the outside world. 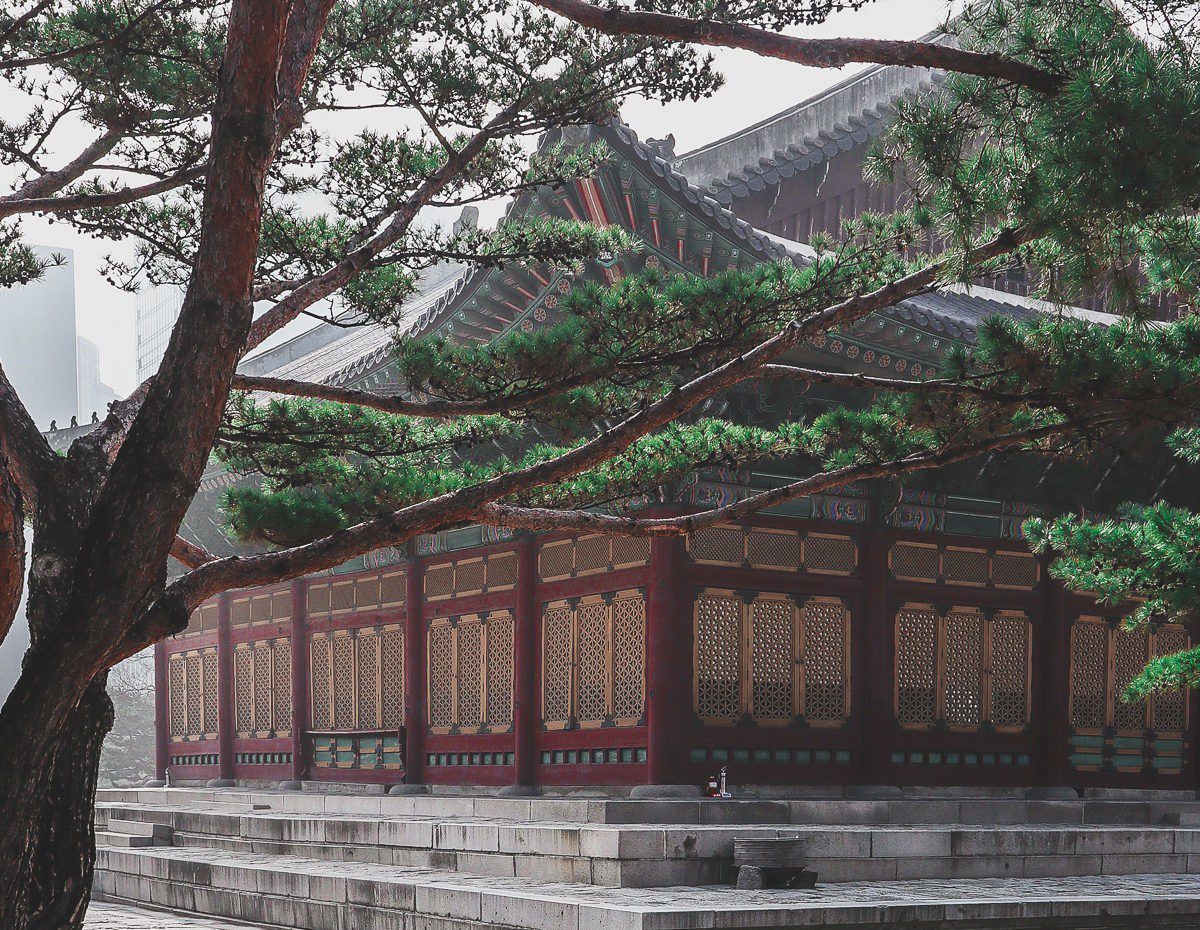 The pavilion located in the garden and called Jeonggwanheon Pavilion attracted my attention for a good reason – it was constructed by a Russian architect by Afanasy Seredin – Sabatin, who was working in Korea for almost 15 years as an architect at the turn of the 20th century. The building itself was used for the banquets.

Actually the first name of the palace was different – Gyeongungung – while it was inhabited by the members of the Royal Family, not a king. It acted as the temporary royal residence for the period of Imjin war as the other palaces were burnt down. 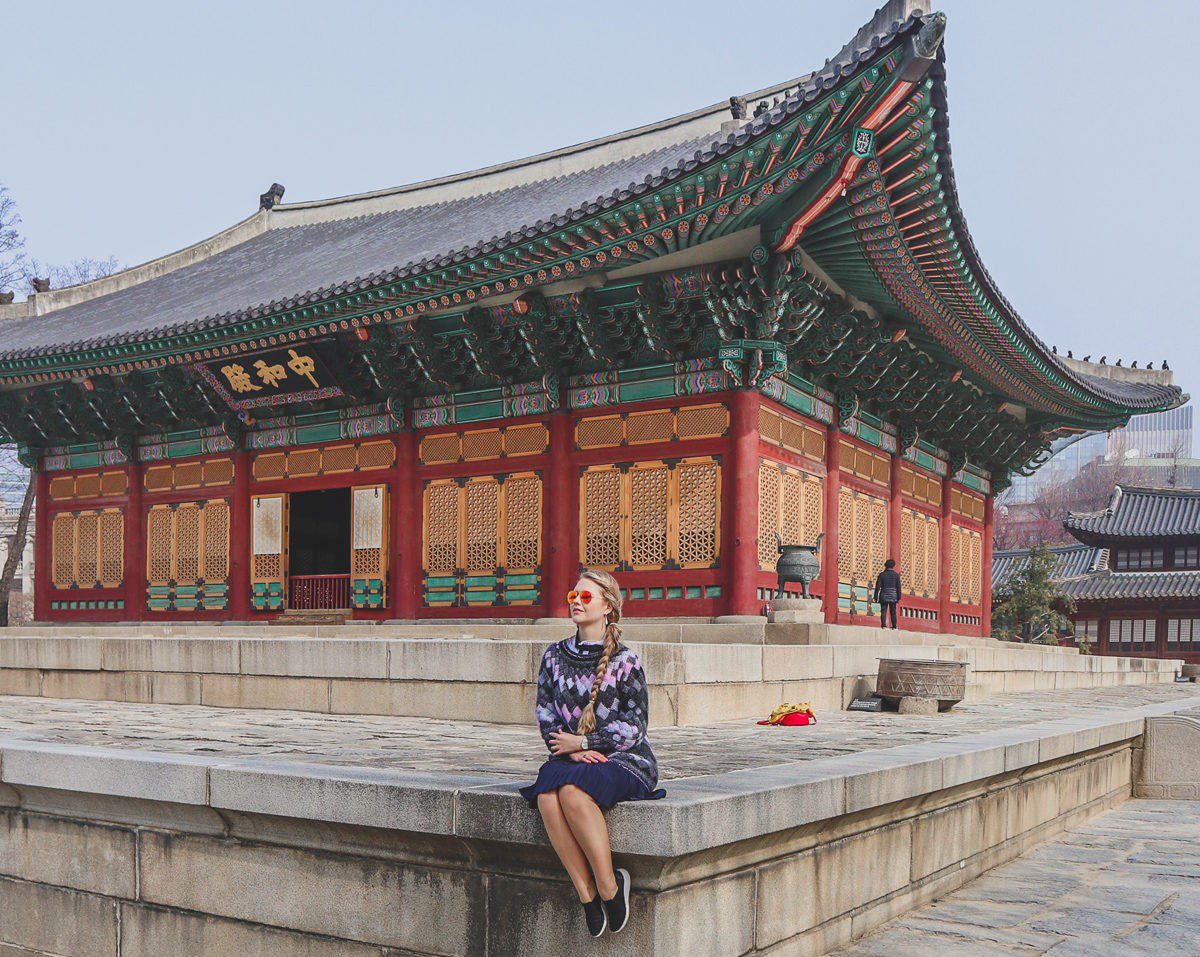 Deoksugung Palace took his current name – the palace of Virtuous Longevity – not without a reason: the last Korean king lived there after the abdication up to the 1919 and unsurprisingly the name reflected it. 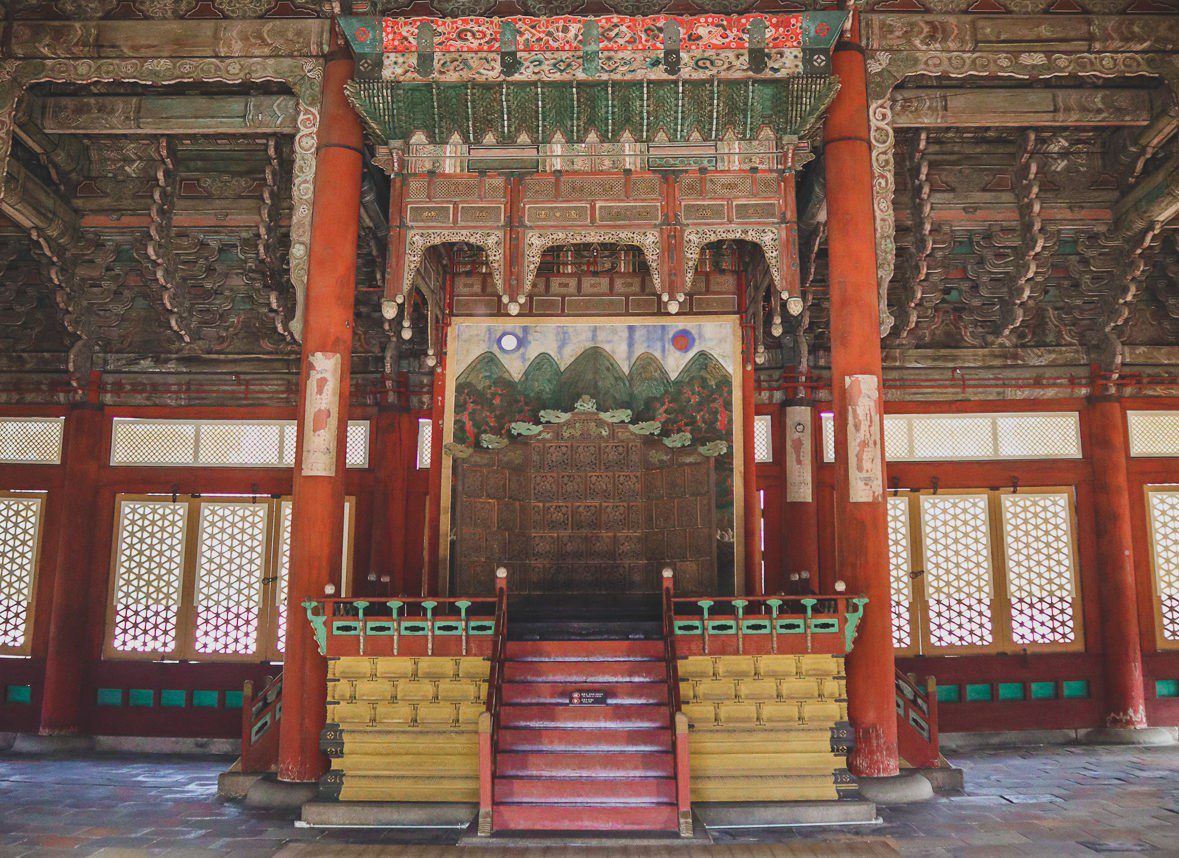 A lot of the buildings didn’t make it to the modern day. 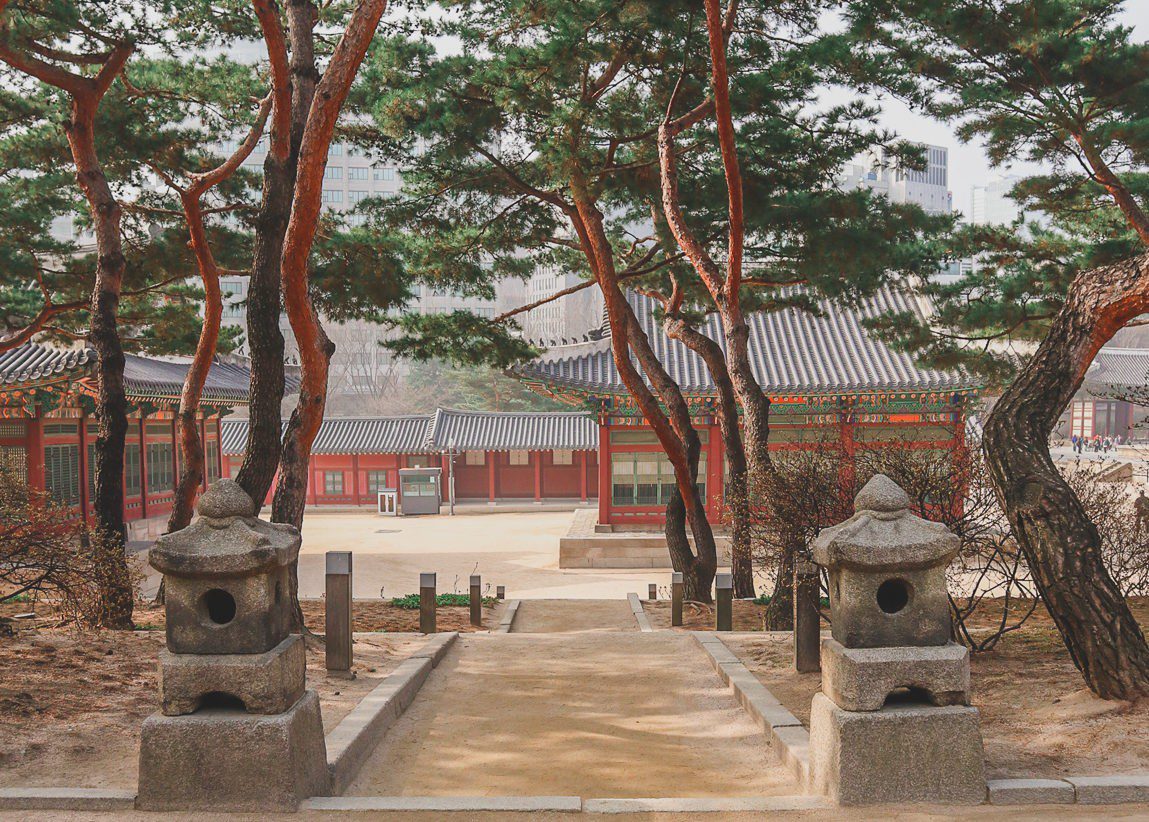 You can have a chance to watch the change of the Royal Guard in front of Daehanmun Gate here as well. 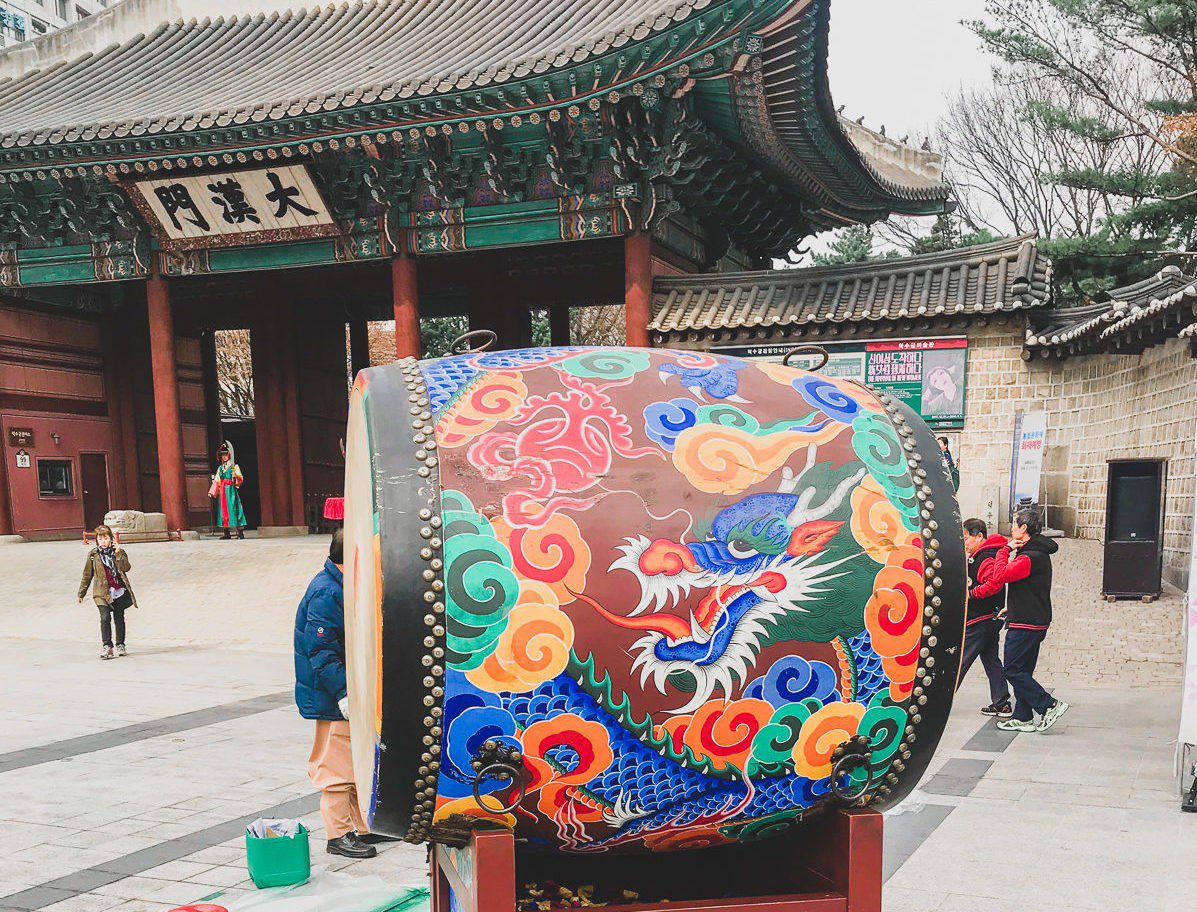 Gyeonghuigung, or the Palace of Serene Harmony

I must sincerely admit that the majority of tourists skip this site. Unfortunately, due to our tight schedule, we weren’t a glorified exception. The Palace of Serene Harmony was built in 1623 and served as as a secondary palace for a king. It used to be filled with the amazing buildings but it was levelled by the Japanese government when a Japanese middle school occupied it in 1908. Just one third of its initial splendour is restored nowadays. 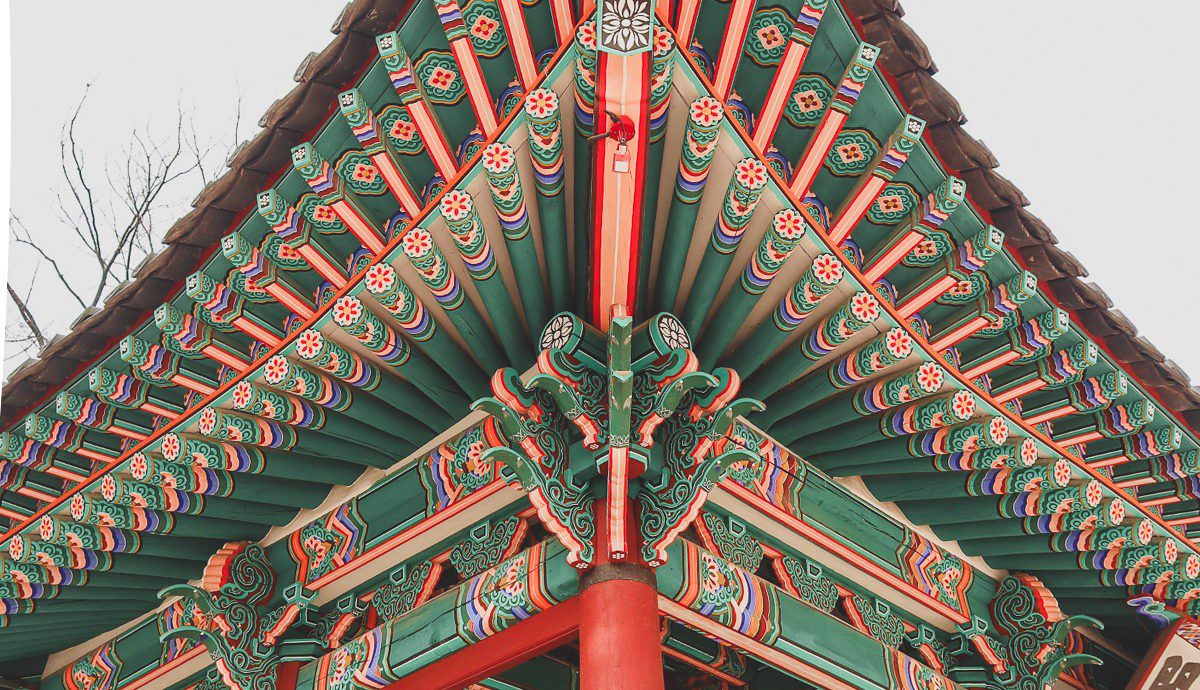 Tip: if you have enough time, go and see the Jongmyo Shrine, another UNESCO world heritage site and the ancestral shrine to numerous members of Joseon dynasty!