This year I’m privileged to work with Clive Cristian Perfume, one of the most unique and prestigious perfumes in the entire world. I always had a weak spot for nice scents – and of course, I was excited to try some of their aromas.

Moreover, I attended an exclusive consultation at Salon de Parfums on the 6th floor of Harrods where I learnt about the history of Clive Christian. 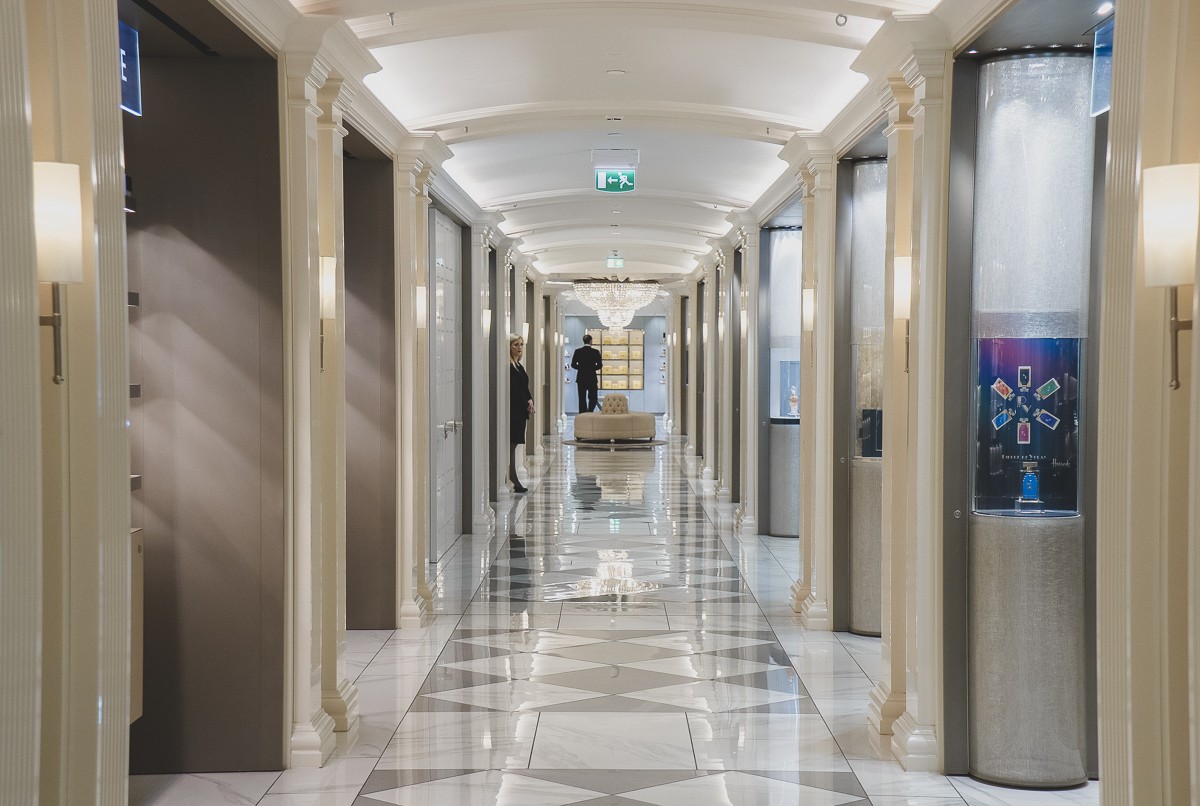 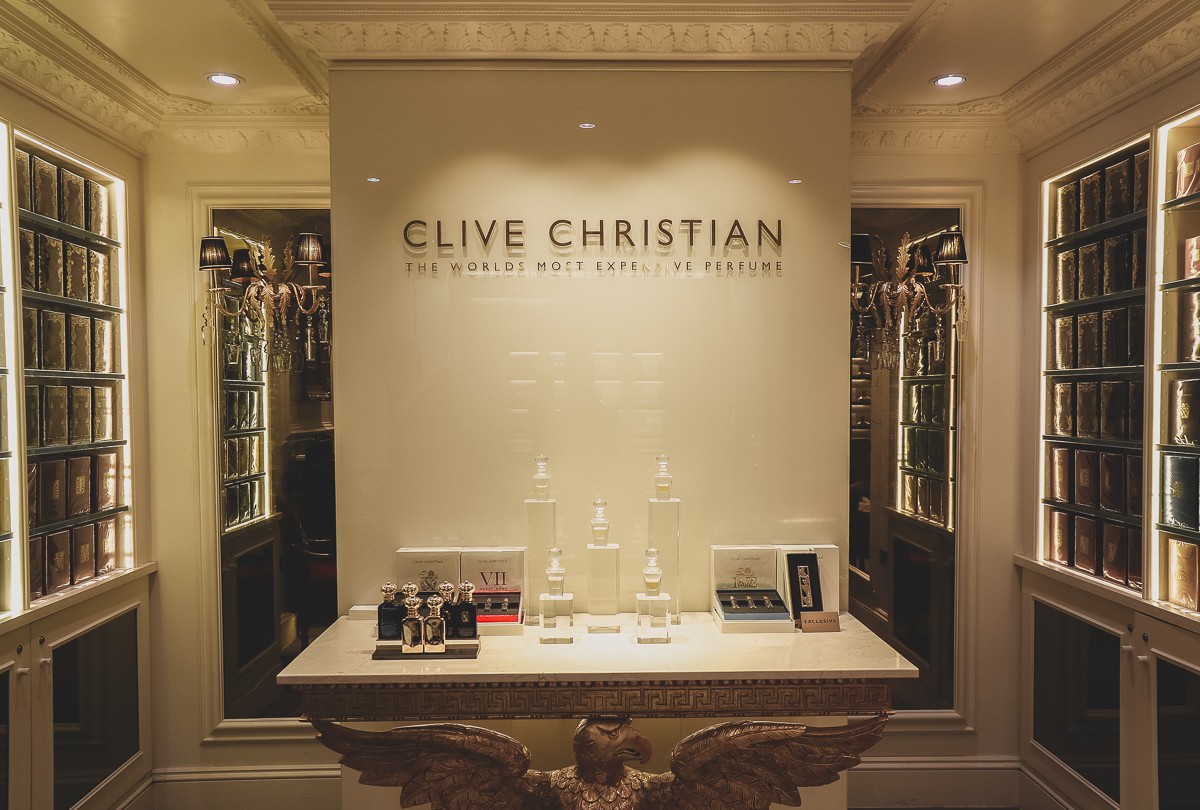 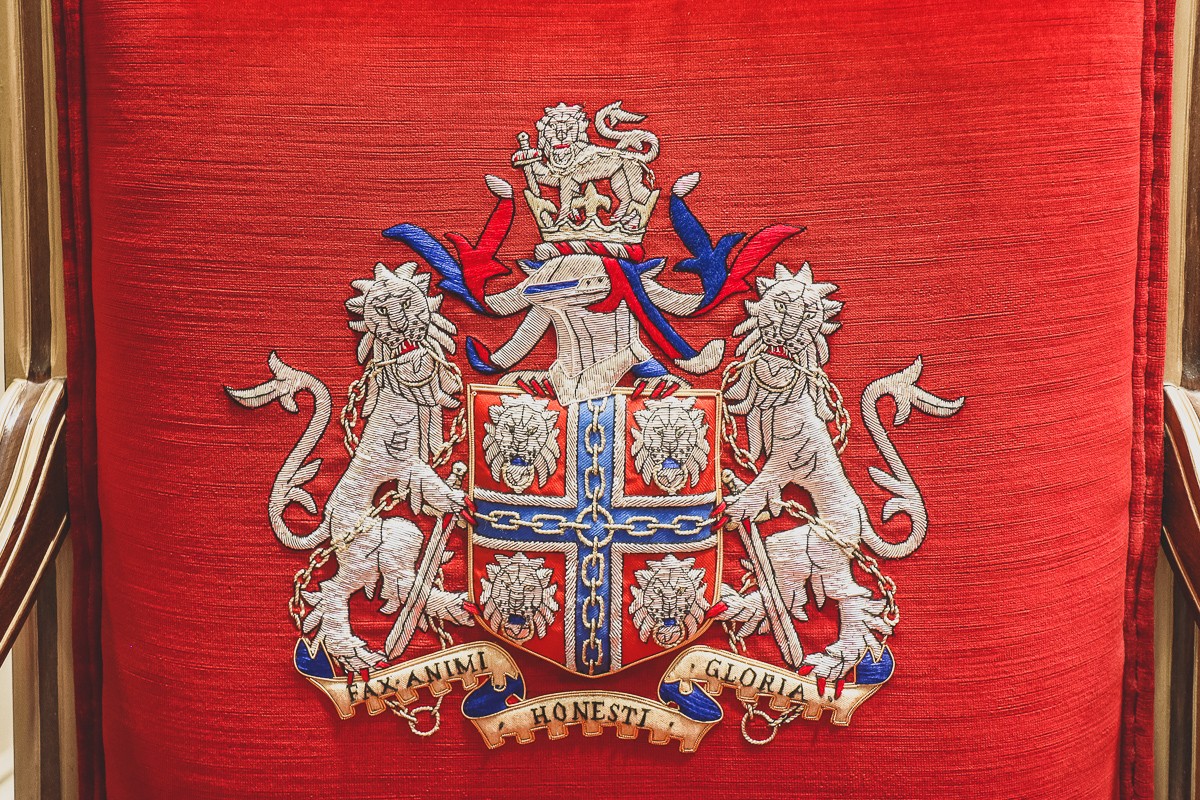 The history of Clive Christian started long ago. William Sparks Thomson, descendant of English immigrants of the 17th century, started manufacturing soaps and perfume in the USA of the 19th century and then moved to the UK and established Thomson, Langdon and Co company. He opened corset business and, a bit later – with a help of his son, started producing lavender based smelling salts (for ladies who fainted while wearing corsets). In 1872 he opened a new branch called the Crown Perfumery that started producing the high-quality scents made out of the most rare and expensive ingredients.

Soon this new-born perfume house gained fame among the noble families of the UK including Queen Victoria and Prince Albert. Queen Victoria liked the scents so much that even granted the Crown Perfumery the right to use her royal crown. That’s the reason why all the bottles are ‘crowned’.

Rapidly Crown Perfumery grew into a company of global success and got sold in almost 50 different countries. Their perfume bottles were even found at the remnants of First Class cabins of Titanic. Amelia Earhart, the first female aviator who made a solo flight across the Atlantic Ocean, had Crown Perfumery Lavender Salts with her during her travels. 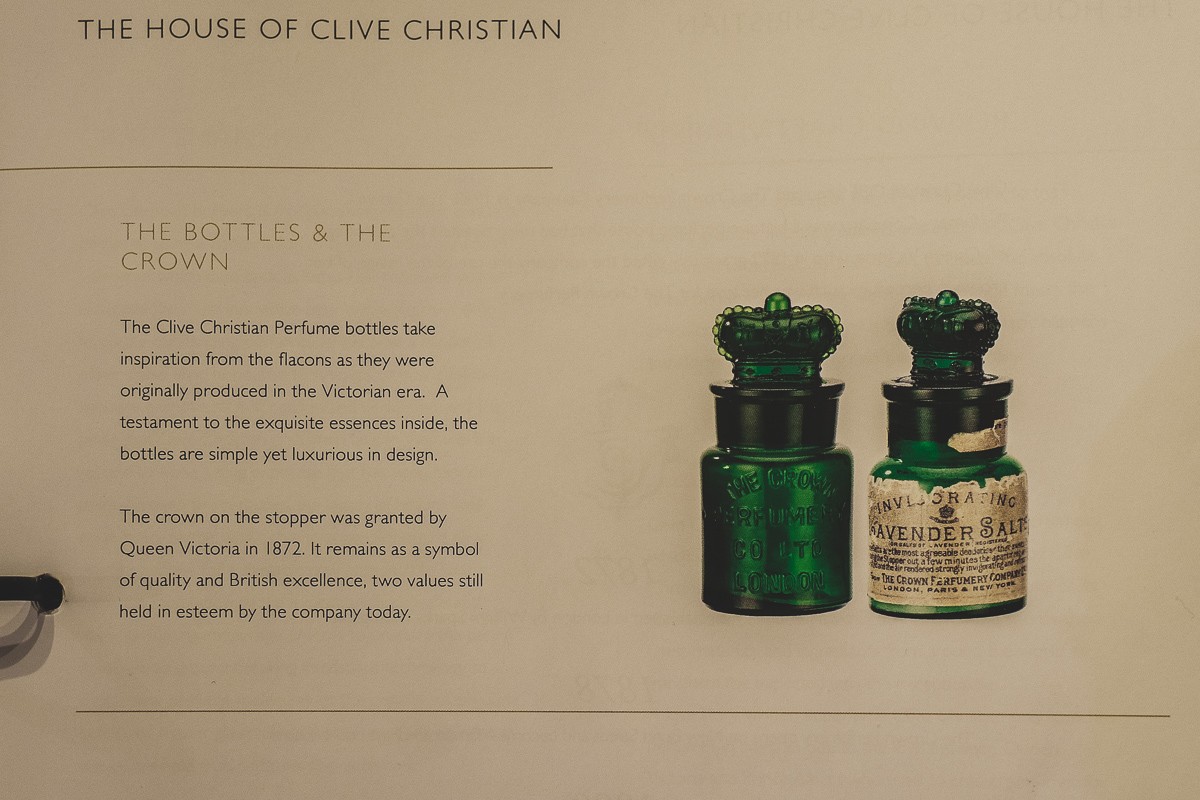 Sadly, later in the 20th century, the company went through the hard times, was sold and bought several times.

In 1999 interior designer Clive Christian discovered the signature bottle of one of the Crown Perfumery perfumes at Burlington Arcade in London. This insignificant event lead to revival of Crown Perfumery – Clive Christian bought the company, and iconic brand was restored to its former glory. Clive’s daughter, Victoria, became the ambassador of the brand.

Collection of Clive Christian perfumes continues the tradition of Victorian elite perfumes. Now there are a few collections of fragrances. Each has its own design – but all bottles are still sealed with the Royal Crown. Besides that, all the fragrances have a unique feature – an extremely high concentration which guarantees the long lasting scent. 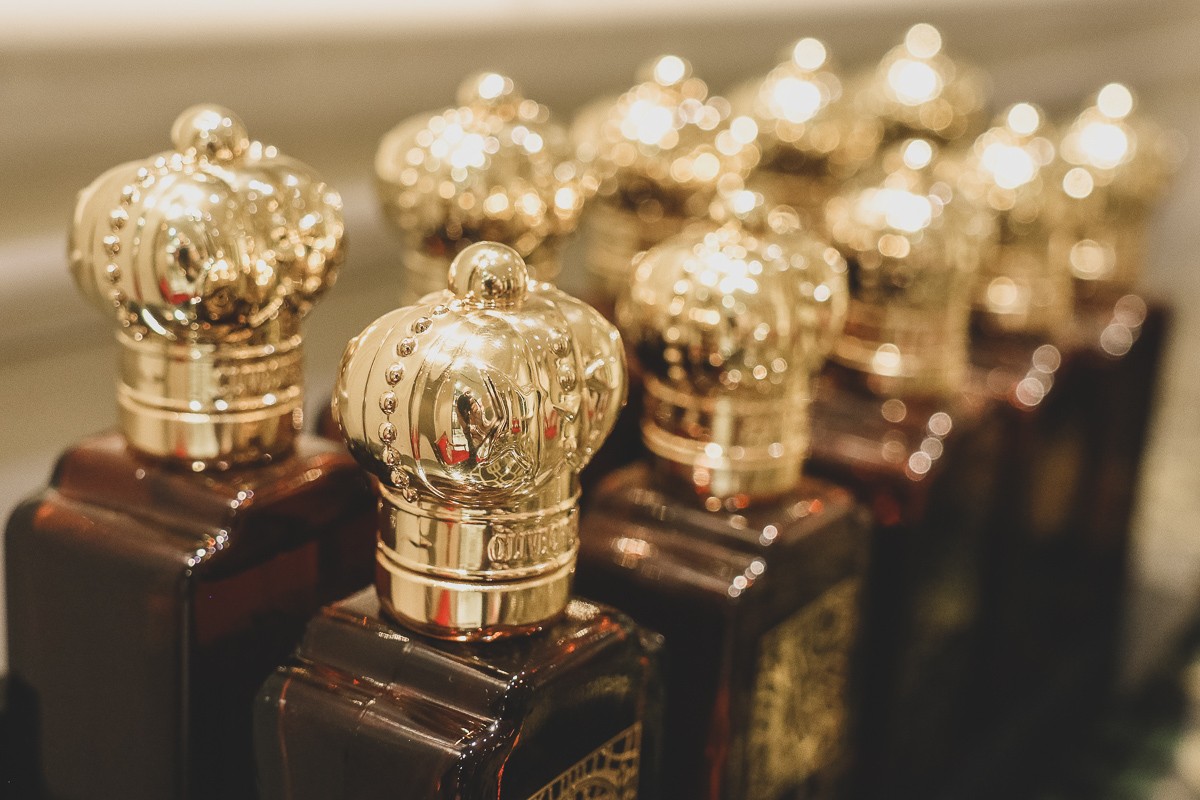 The very first perfume launched by Clive Christian was the Original Collection of three pairs (feminine and masculine) of scents: 1872, as an homage to the history of Crown Perfumery, X and No1. The limited edition of the last one – Passant guardant – became known as the World’s Most Expensive Perfume. 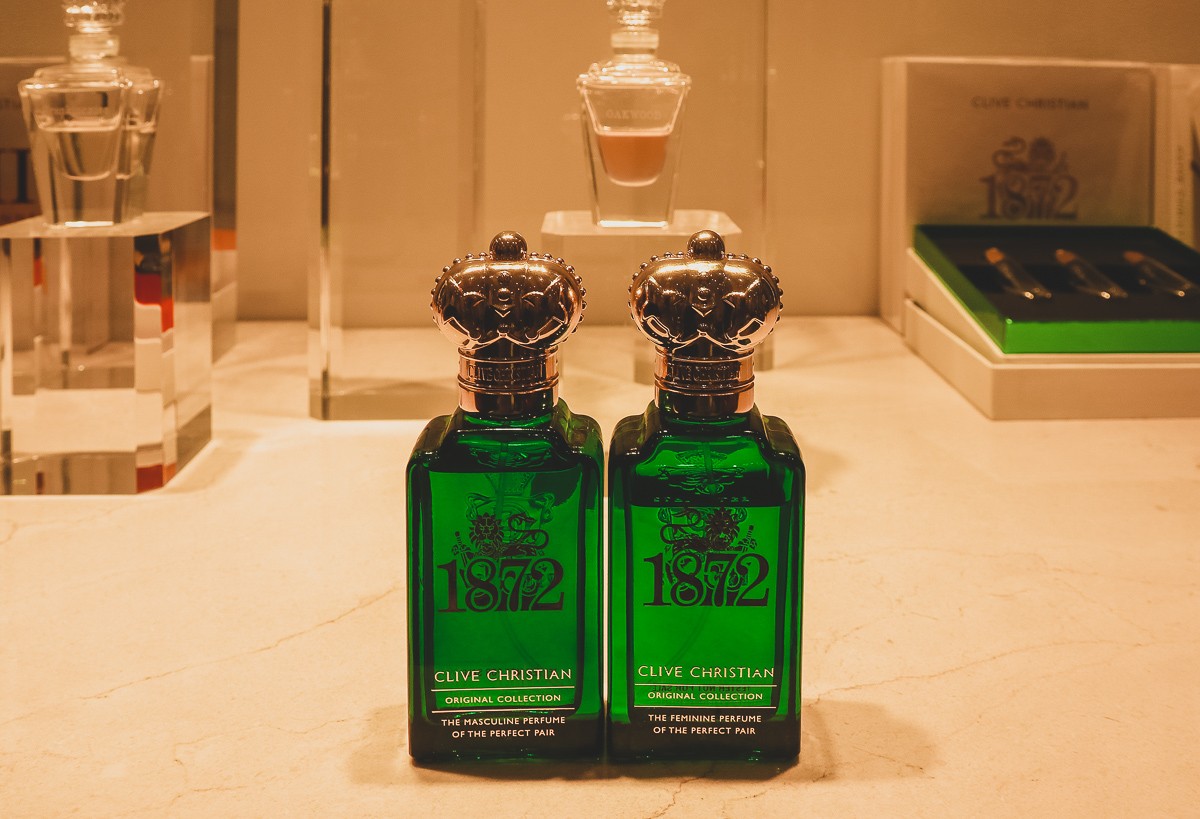 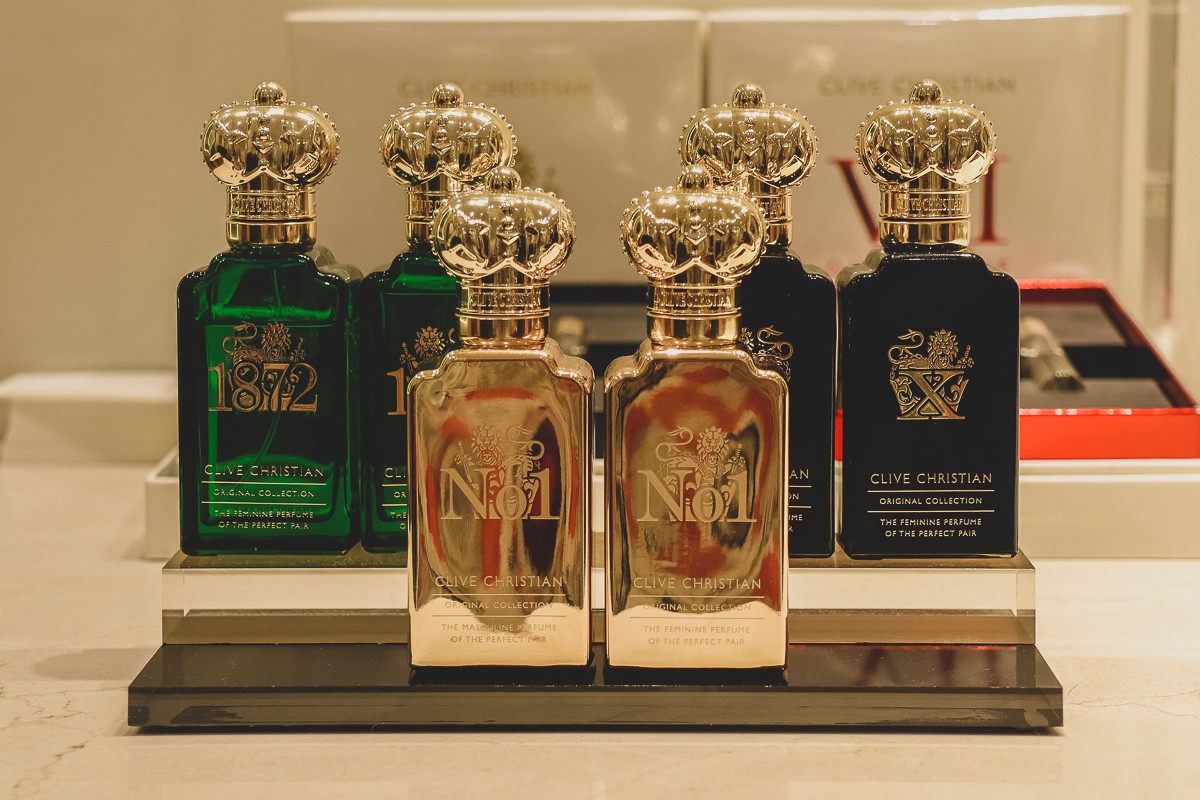 More collections were launched later. The Private Collection –  ‘C’, ‘L’, ‘I’, ‘V’ (named after Clive Christian’s daughter Victoria), ‘E’ – was inspired by Clive’s memories, and The Noble Collection is dedicated to the English architectural history. 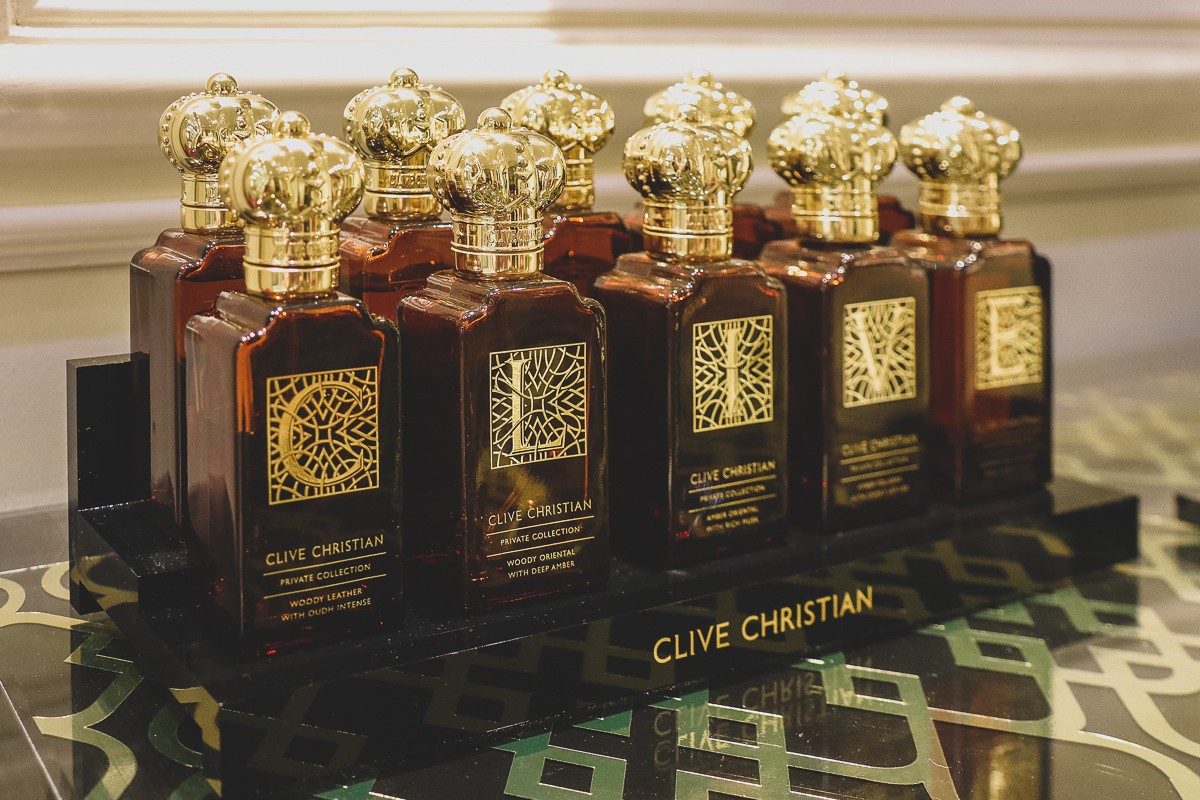 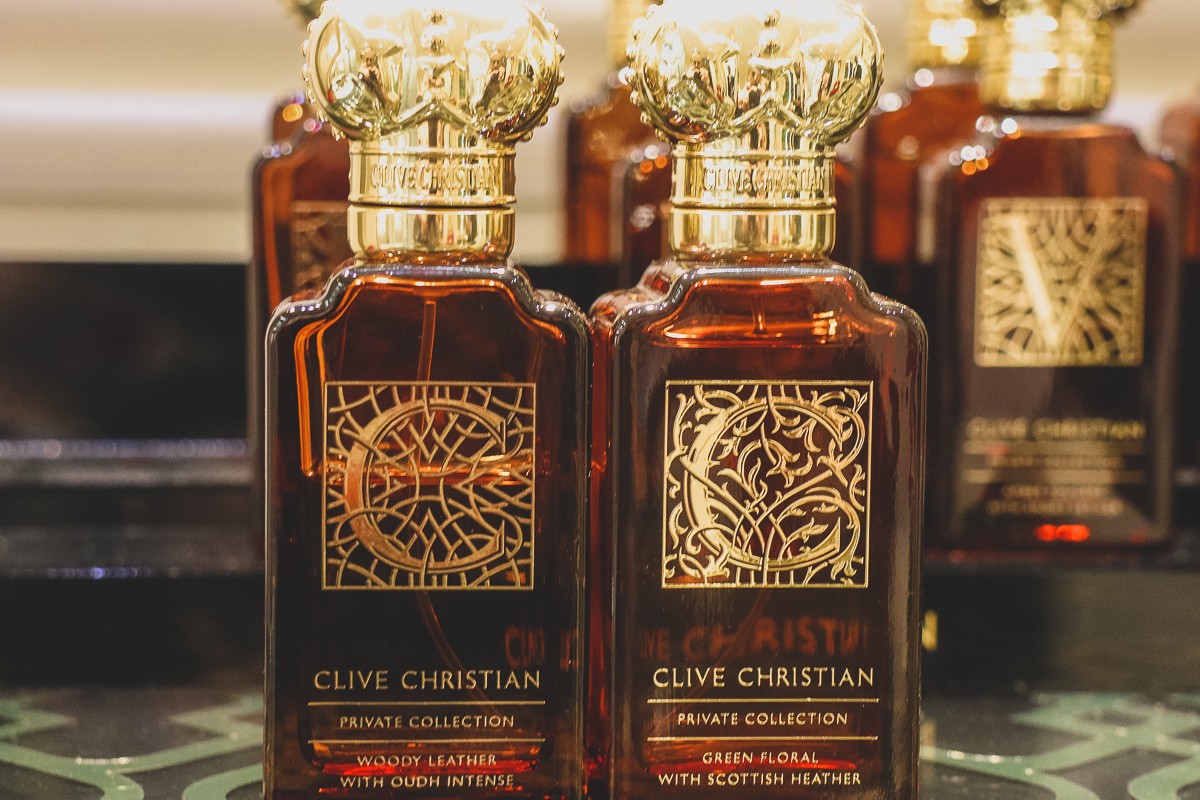 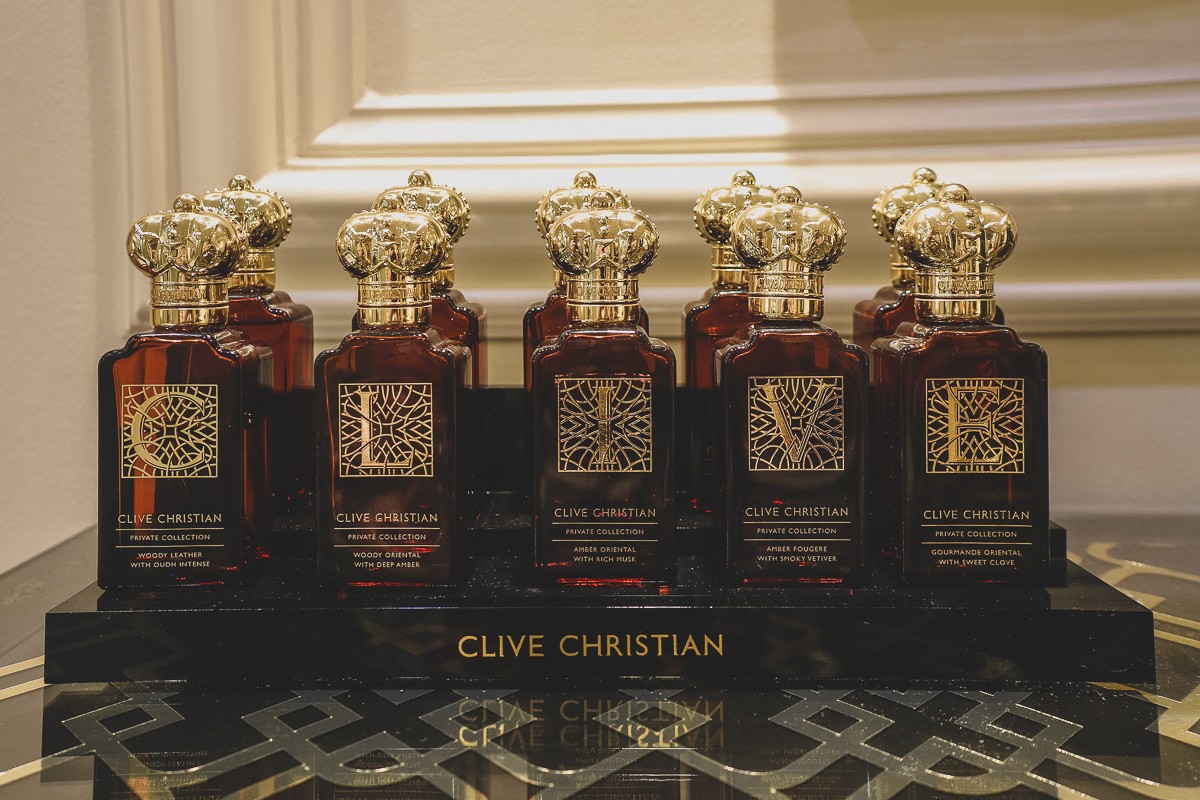 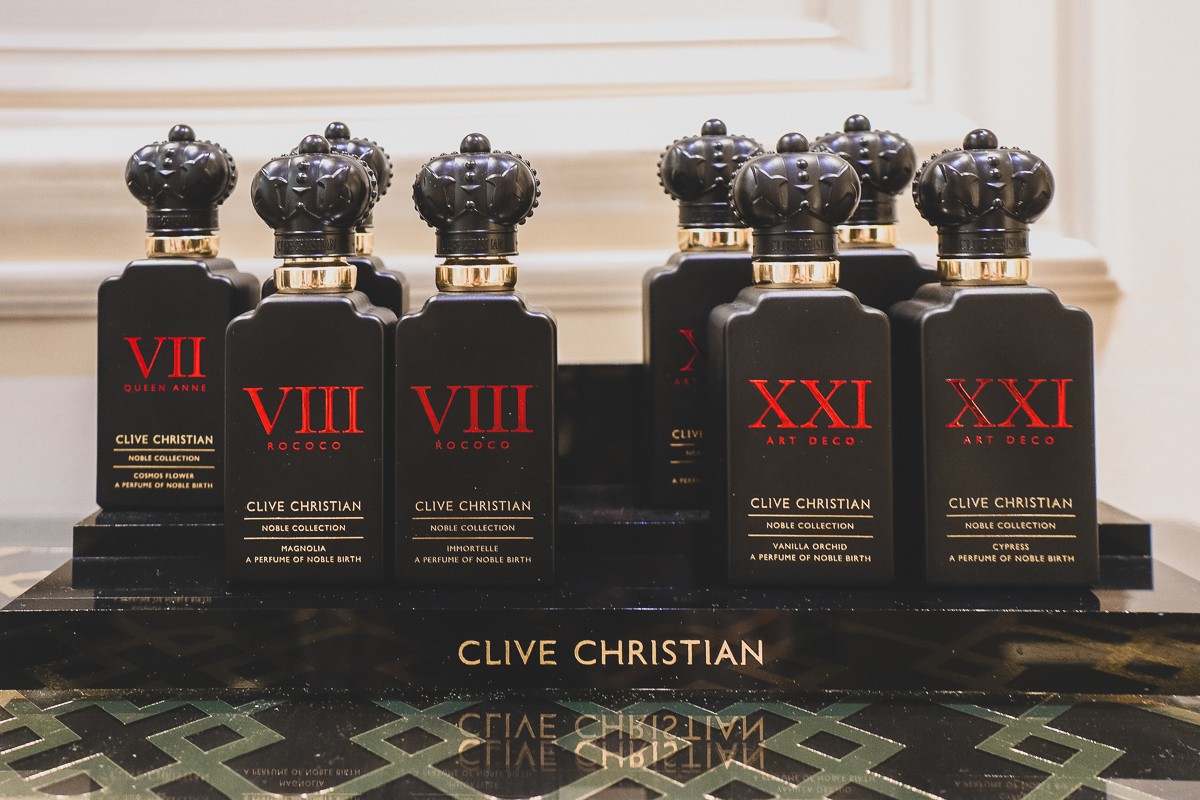 Addictive Arts is another collection capturing your eye by mystical bottles of blue glass – as I was told, poison bottles used to look like that. Two latest scents from it – Soporific and Manic – were launched exclusively in Harrods. 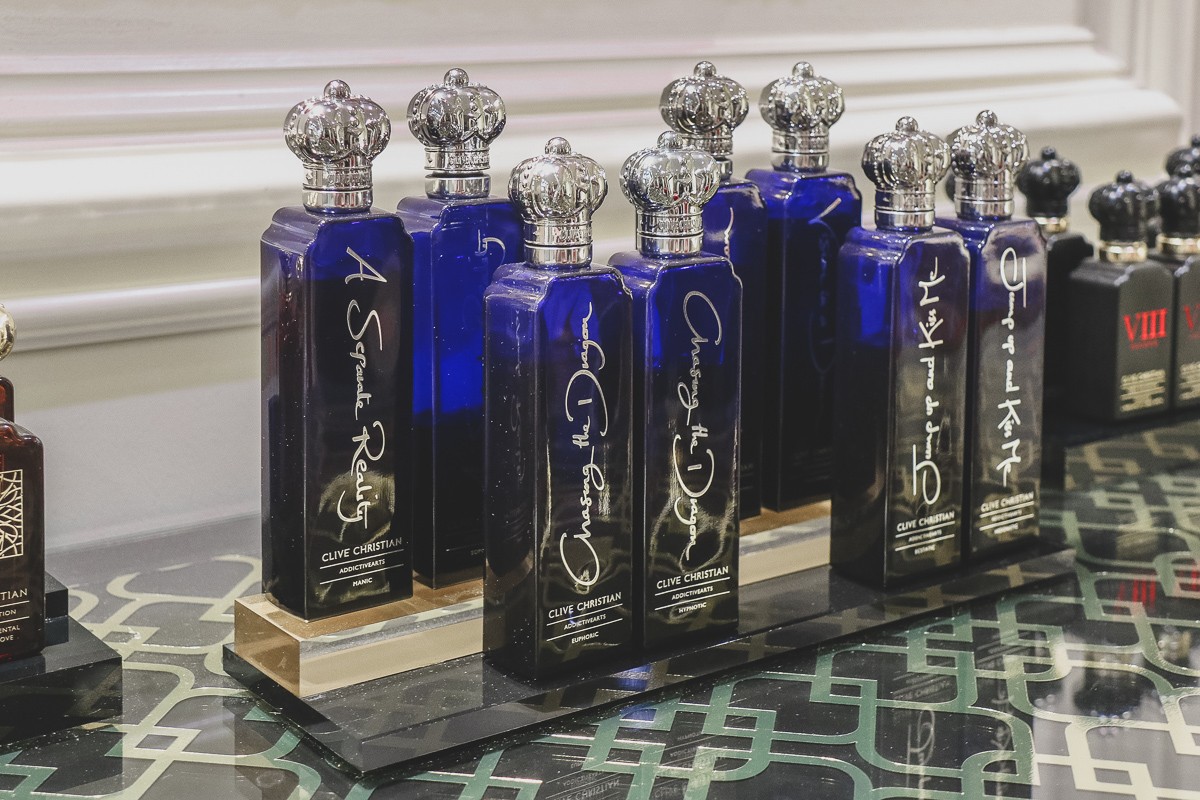 There is the Absolute collection of the Clive Christian oils, the most concentrated form of perfume, too. The flacon is nestled in a handcrafted Walnut Burr box when you buy one. 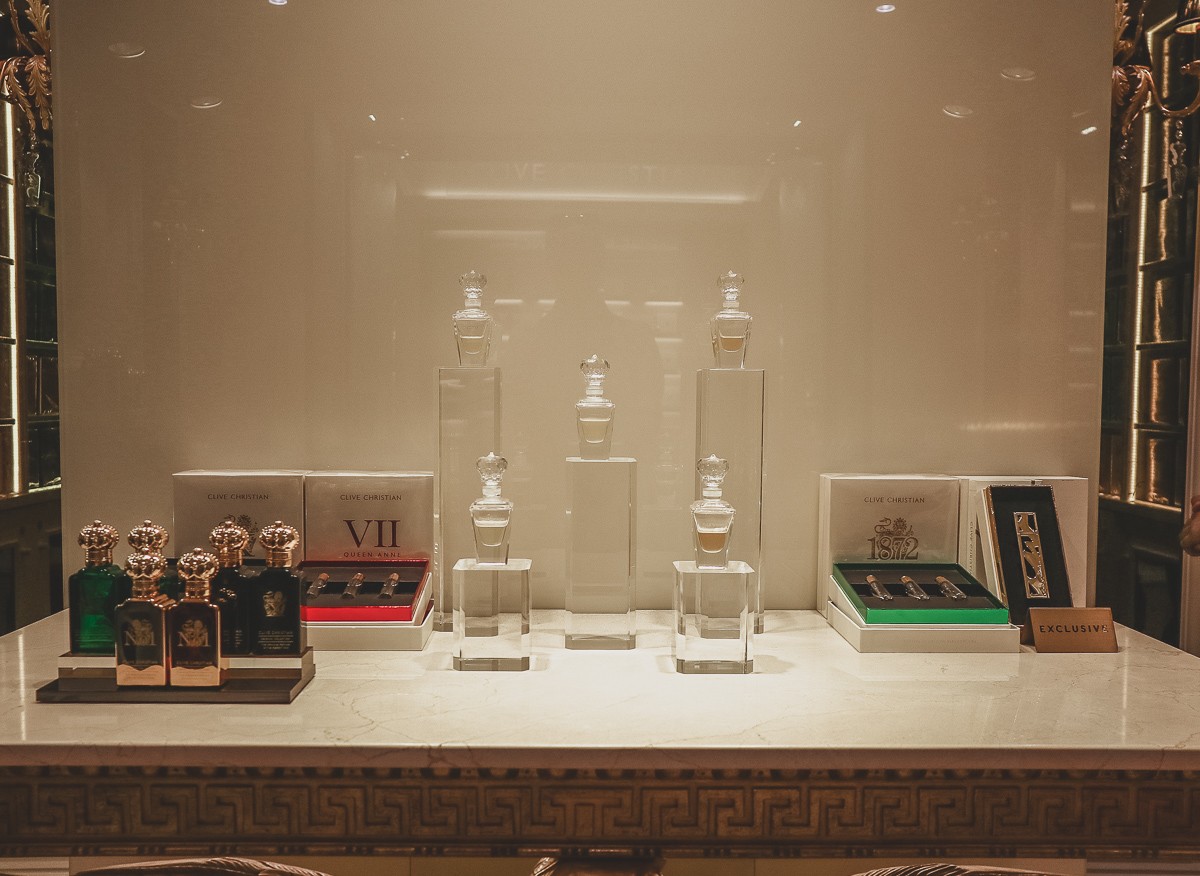 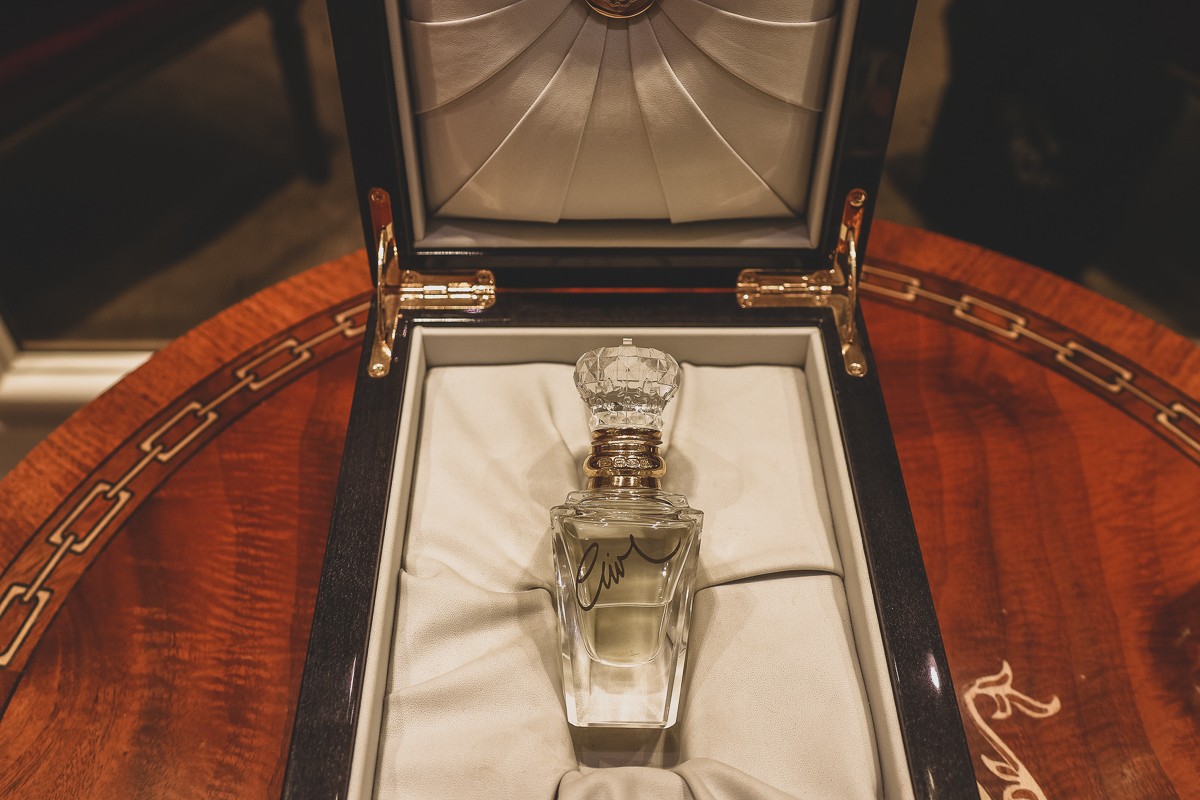 Another treasure in the Clive Christian Collection are Imperial Majesty perfumes: a limited edition of only ten huge crystal flacons with five-carat diamond and gold around its neck and accompanied by a certificate signed by Clive Christian himself.

If we are to talk about scents I Iiked the most, X Chypre Floral perfume, a wonderful mix of jasmine, bergamot, mandarin, rhubarb and cedarwood, is definitely among my favourites!

Hope you enjoyed my blog,
Best,