Right in time for the celebration of the Lunar New Year I’ve prepared a blog about the most widely known historic landmark – the Great Wall of China! Actually I collected some facts which you might find useful if you’re planning a trip over there and also included our experience of visiting Mutianyu Great Wall Section. 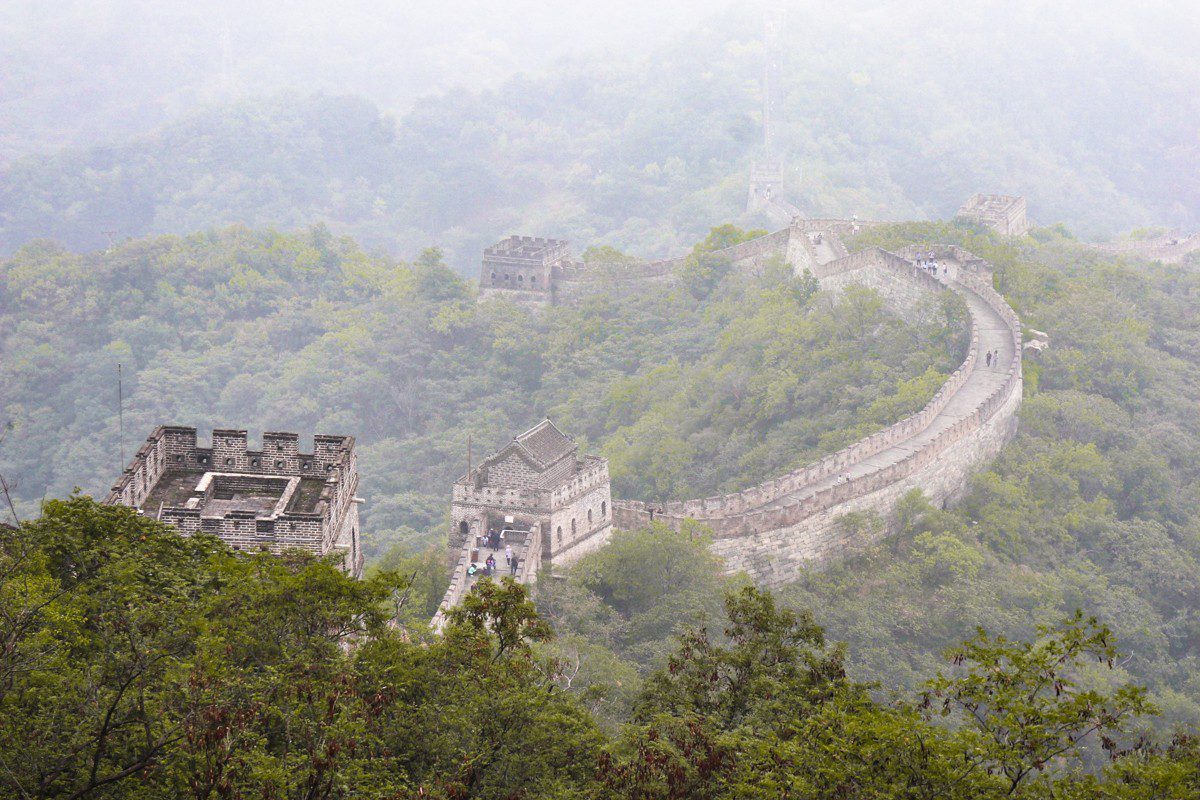 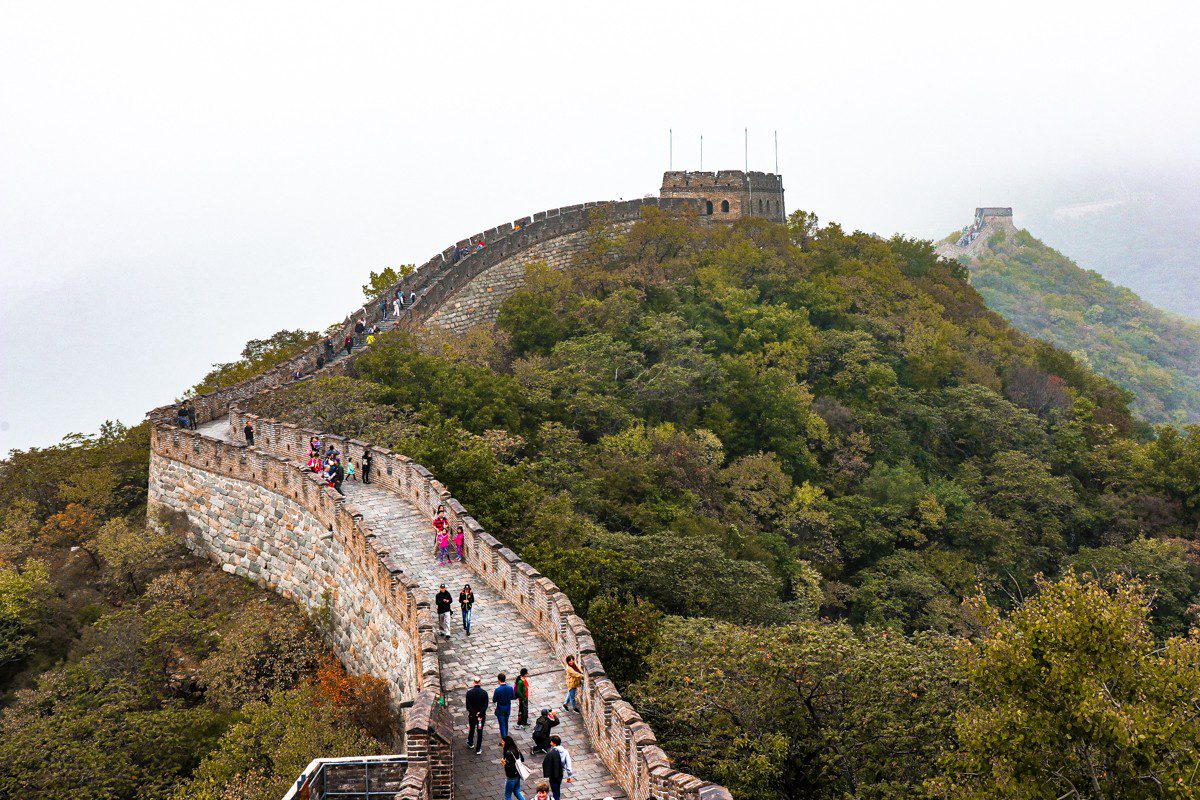 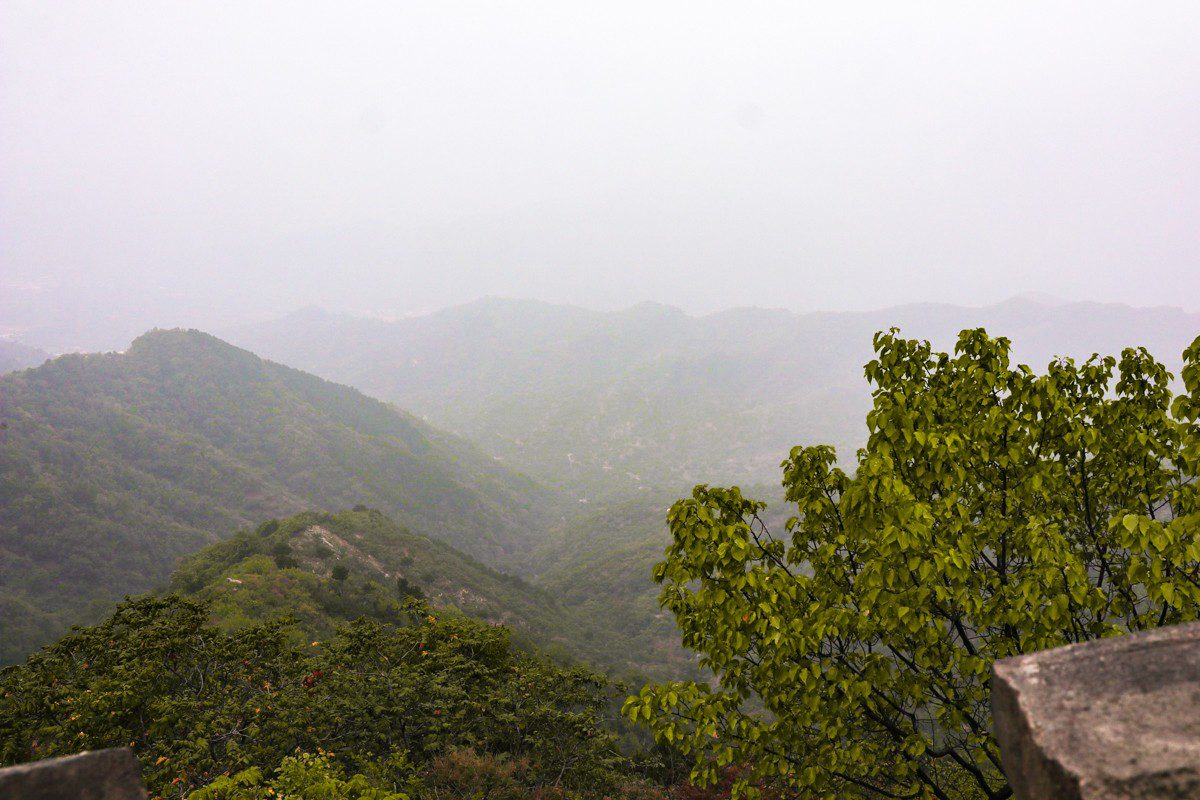 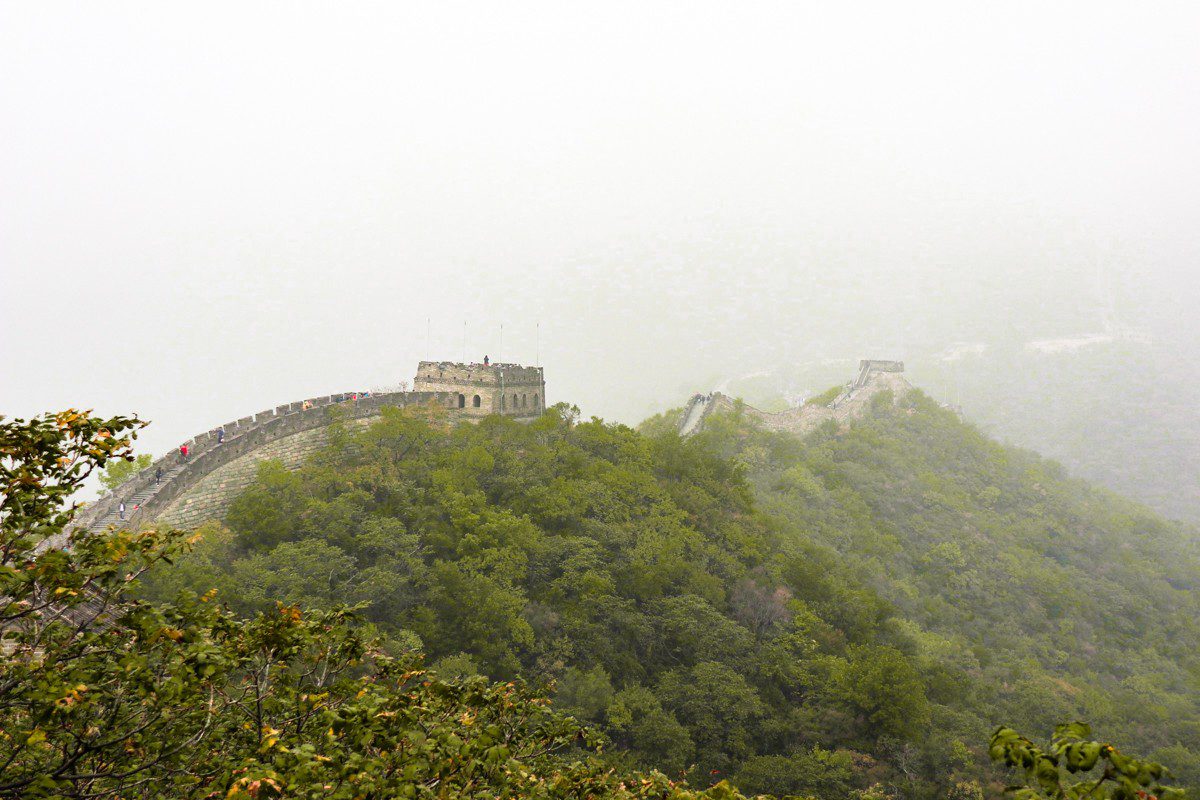 Initially the Great Wall of China was built to protect the northern border from invasions. This glorious defence structure is listed as a UNESCO World Heritage. 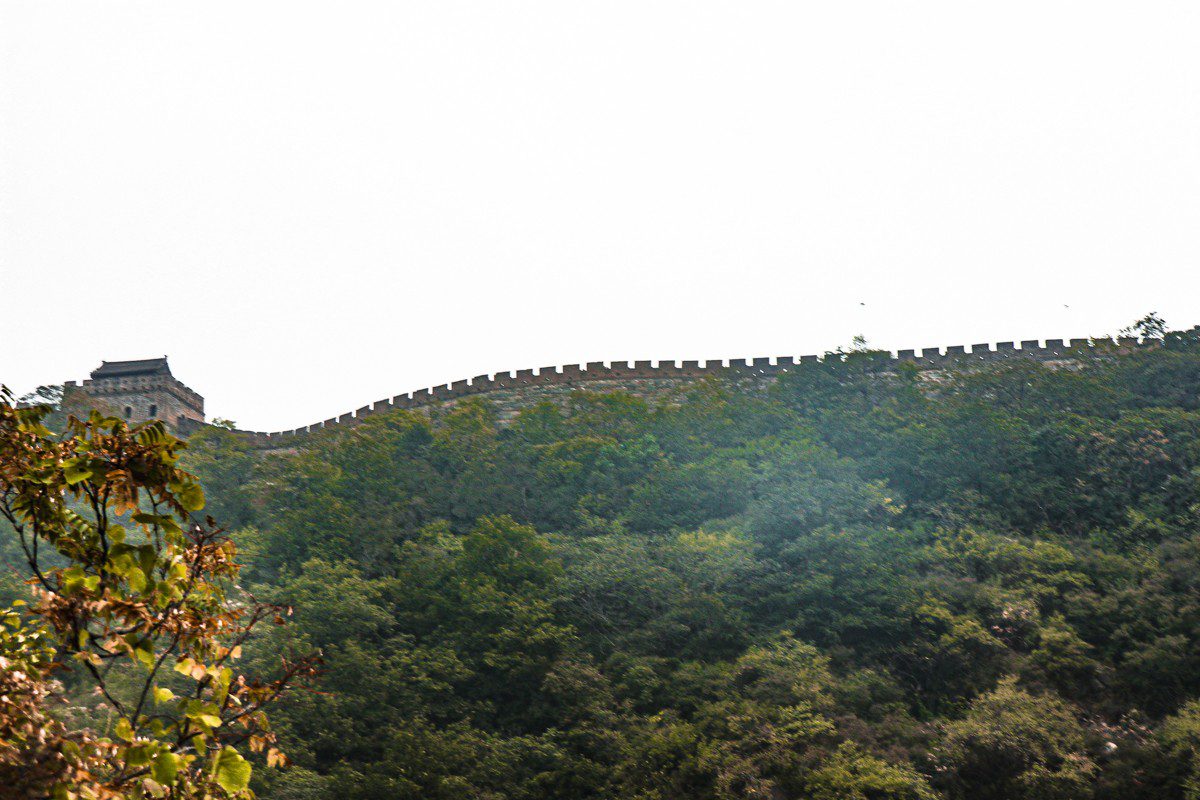 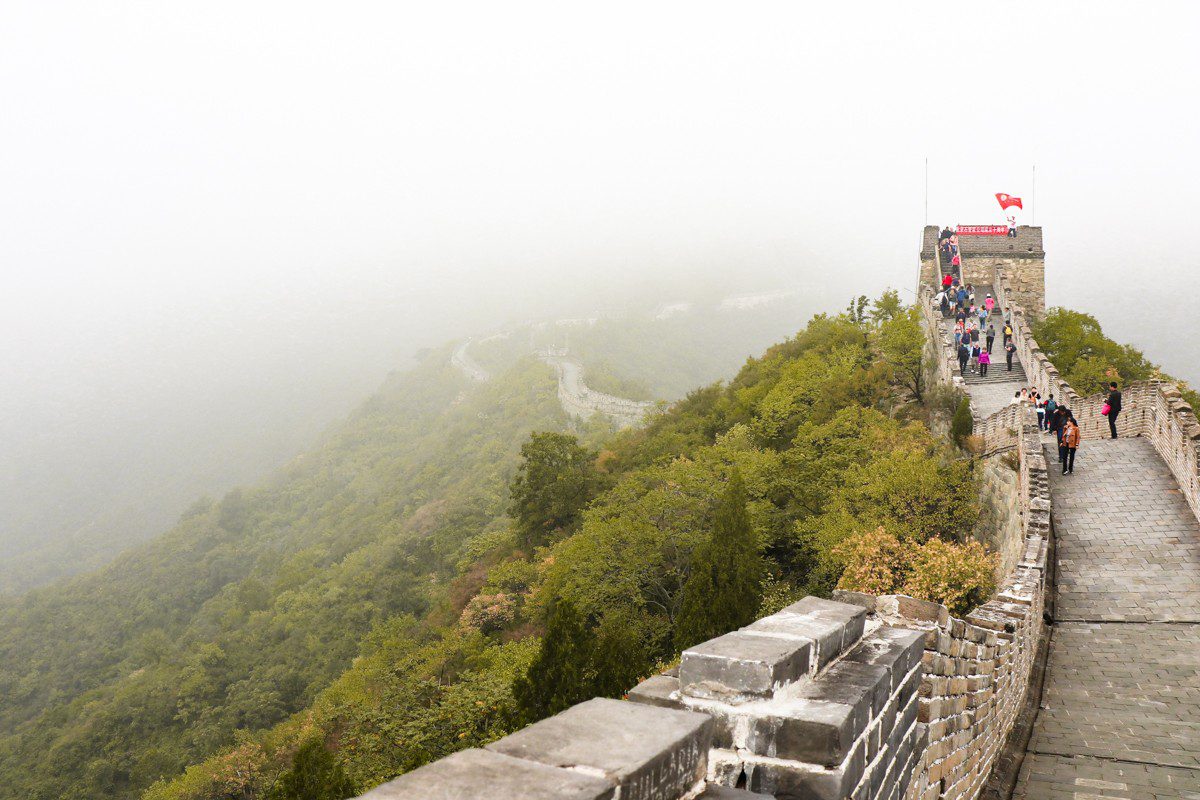 The Great Wall of China is over 2000 years old, isn’t it? It’s true and it’s not at the same time. Its construction took over 2000 years in total. The first independent border fortifications date back to the 8th century BC and in the 3d century BC they were extended and unified during the reign of Qin Shi Huang, the First Emperor of the Qin Dynasty. Only a small sections of these constructions survive in their original form.

Over the centuries and various dynasties, the Wall was rebuilt and extended multiple times. It’s fair to say that the defensive Wall as we know it today dates back to the Ming Dynasty whose rule lasted from 1358 to 1644 when the wall was transformed into a waste military fortification. So, actually the largest part of the Great Wall of China is much younger than you might have thought.

In Chinese, the title of the Great Wall is rather ‘the Long Wall’ than ‘the Great’ and it’s not specified that ‘the wall’ is in the singular form: it could well be translated as ‘The Walls’. And actually, this is more accurate because there is no single solid wall: the wall-like structures have intermissions and even overlap!

Mutianyu Section of the Great Wall

The wall structure includes not only the wall itself, but also the fortresses with gates, watchtowers, beacon towers etc. There are a few sections of the Wall popular for visiting, for instance, Simatai, Badaling and Mutianyu. 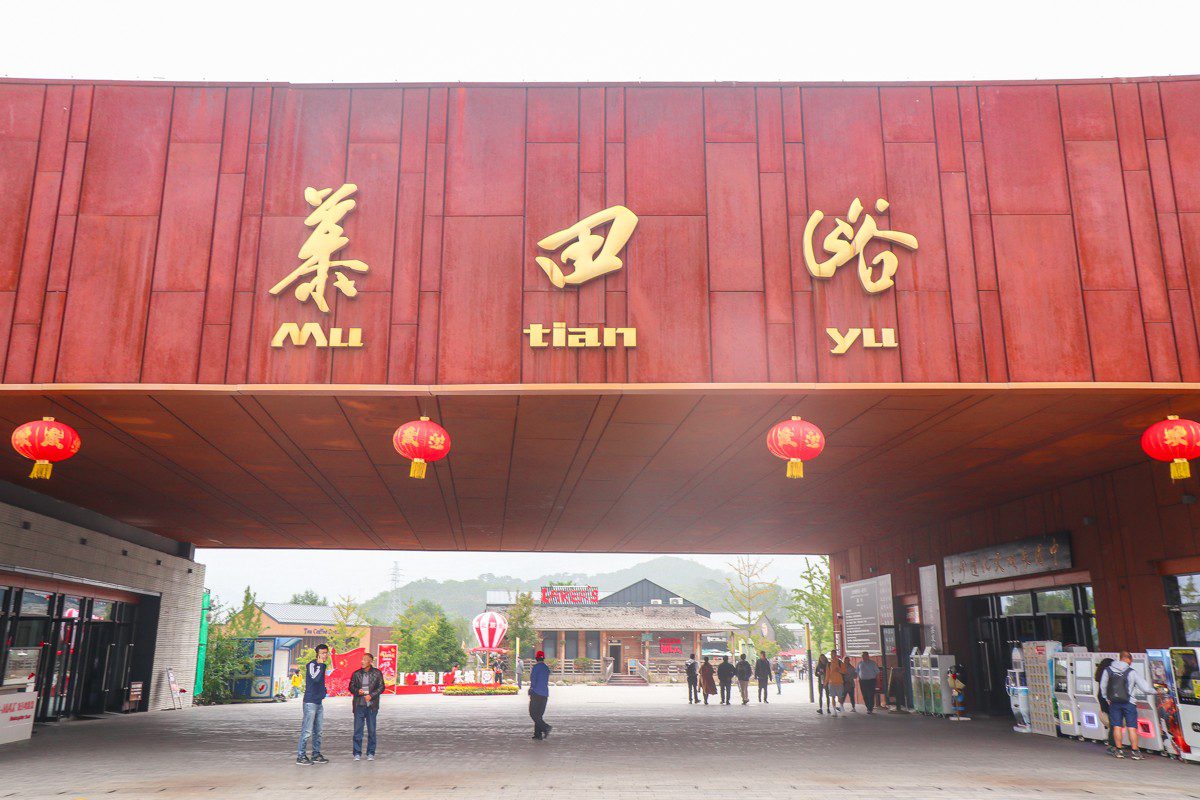 We opted to visit the latter one for several reasons. First, it’s located a reasonable drive away from Beijing, about 1,5-2 hours depending on traffic. Secondly, it’s not the most touristy section: Badaling section is believed to be the most packed.  And believe me, even Mutianyu was quite crowded! Thirdly, it’s also restored so we though we can see The Great Wall in its full glory – but in reality, during our visit it was super foggy, and what you see on my shots is actually a result of heavy editing. Another reason is that the cable car access is available for the Mutianyu section but you can go hiking there too. 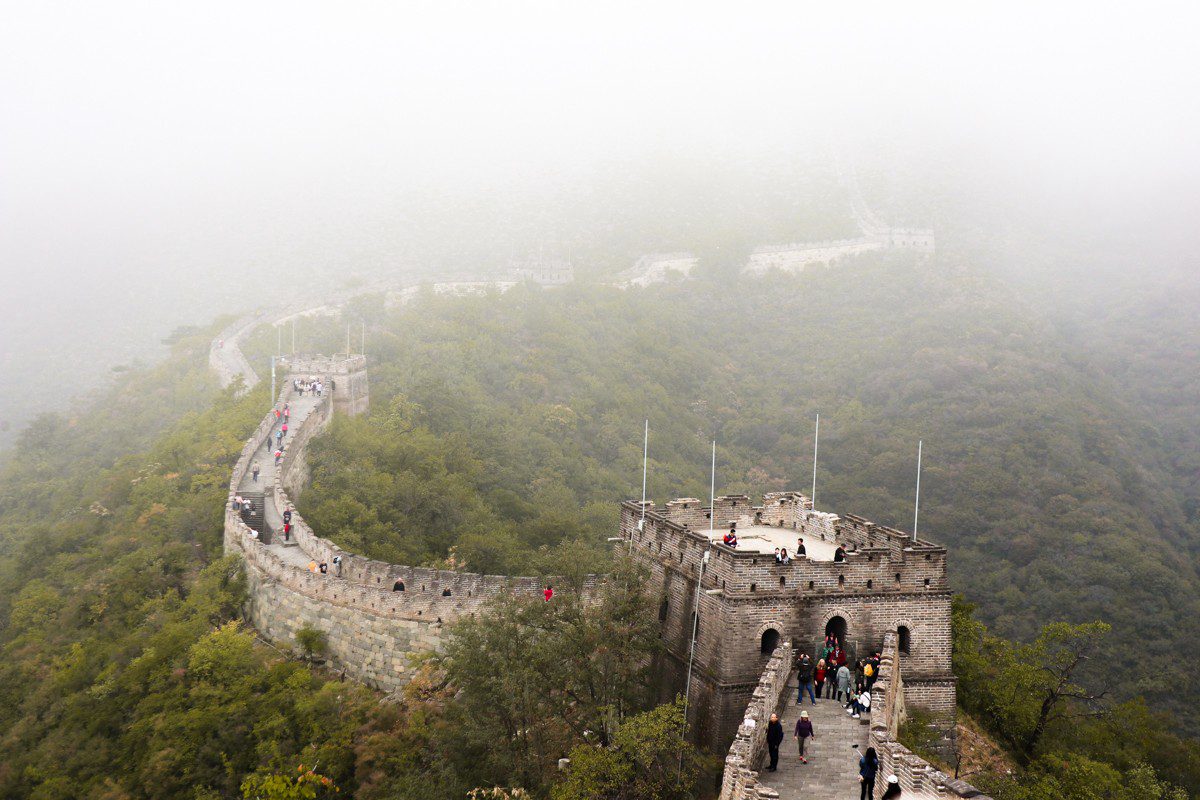 The point worth mentioning is that as this section was FULLY restored, it might be more appropriate to call it ‘a replica’ of the Ming Dynasty wall than The Great Wall itself. But of course everyone sees it as one pleases. 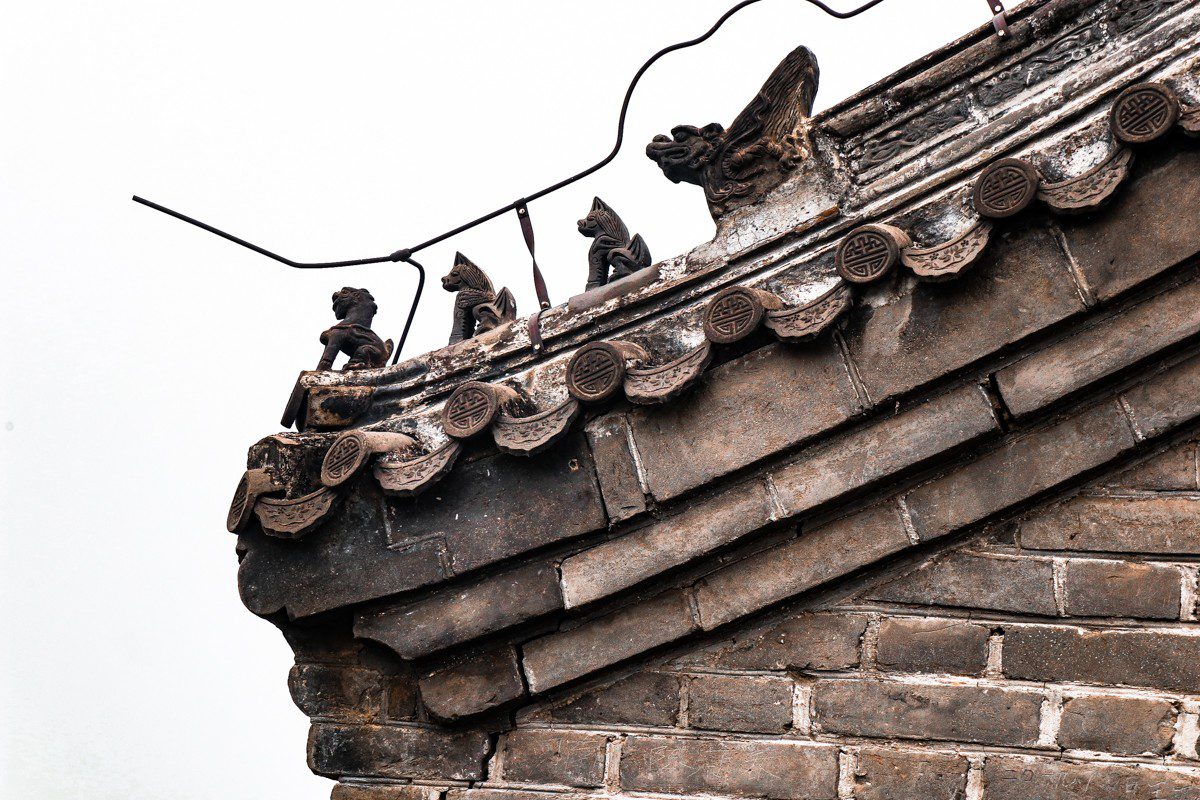 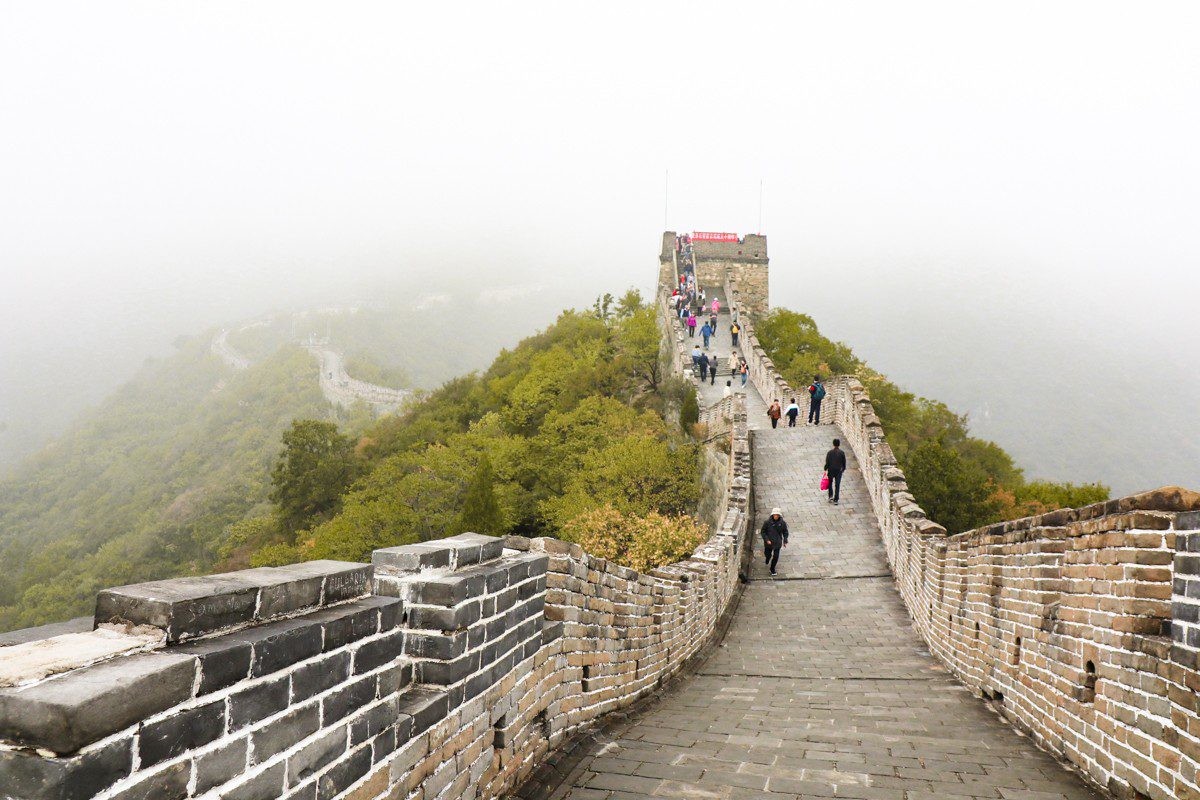 The surroundings even when covered by the fog are beautiful, don’t you agree? 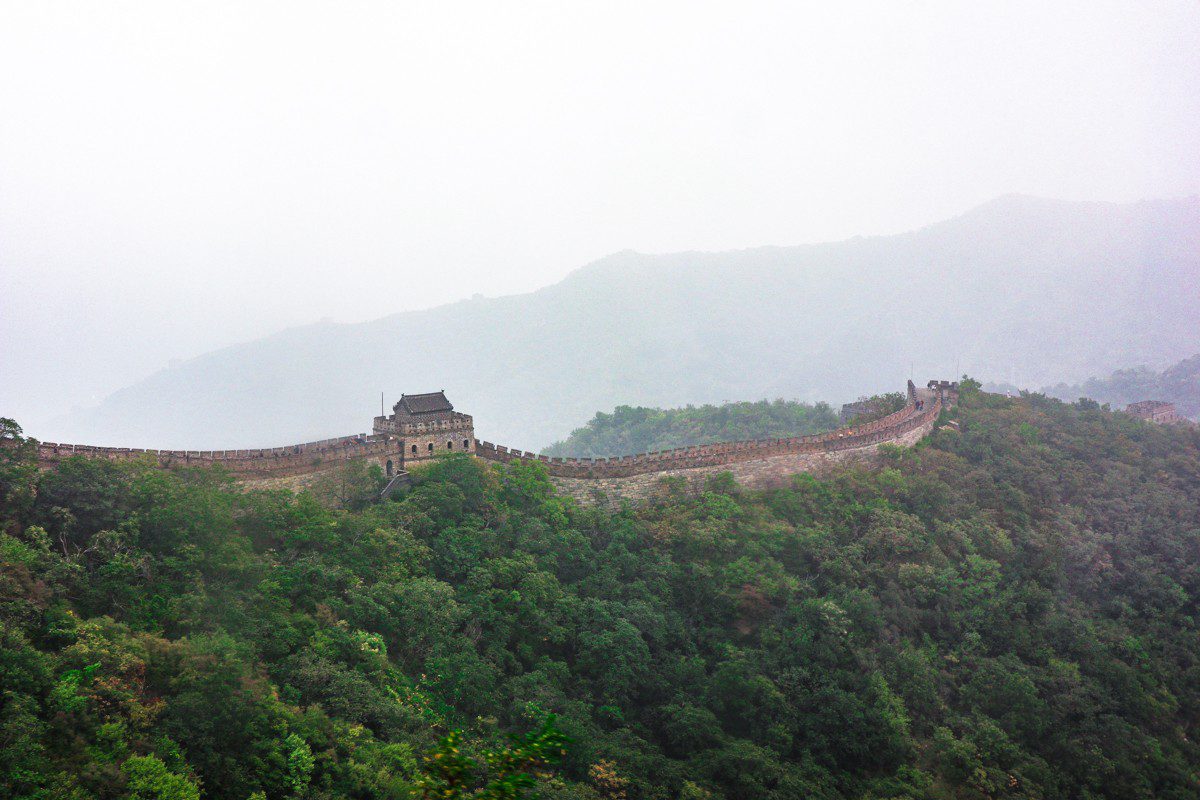 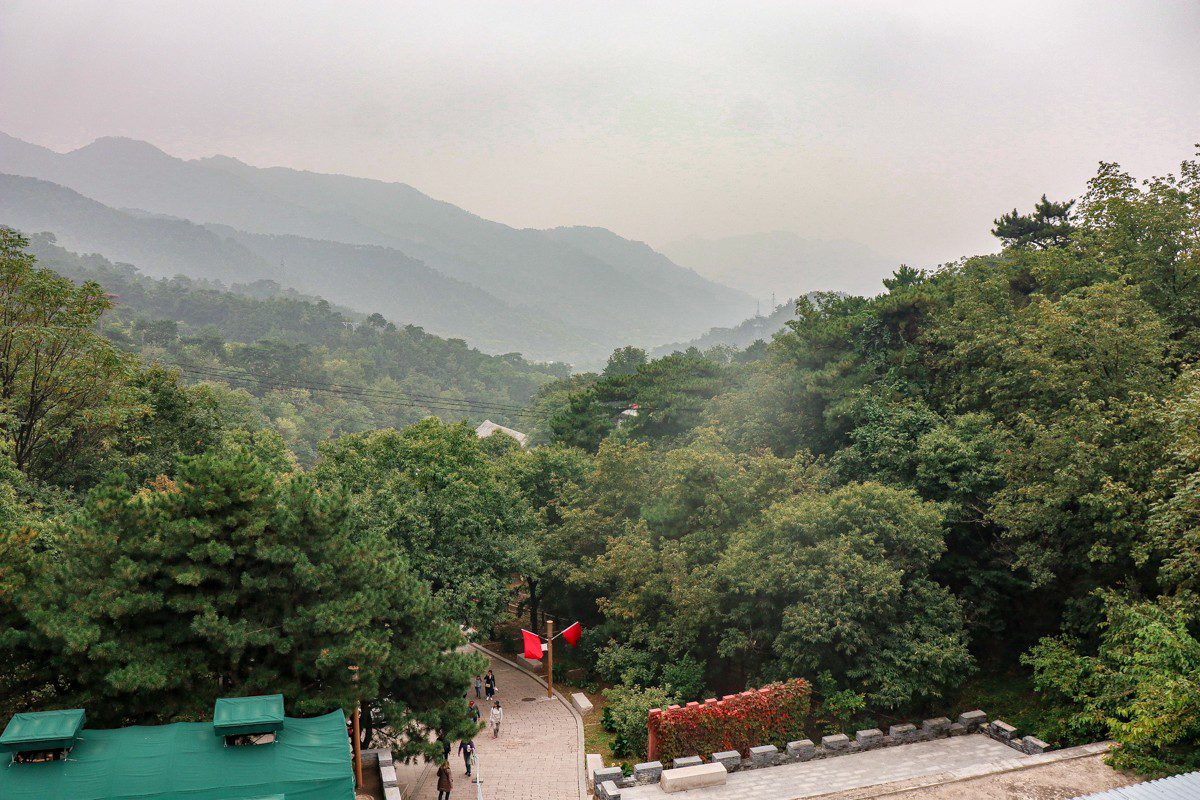 Meanwhile, I must note that even if visiting Mutianyu section is usually described as an activity that doesn’t demand a lot of physical effort, actually it does: the walking area is slippery and uneven, with constant ups and downs and occasional steps. It might happen that other sections are much worse but still, don’t think that you can go to Mutianyu wearing heels 🙂 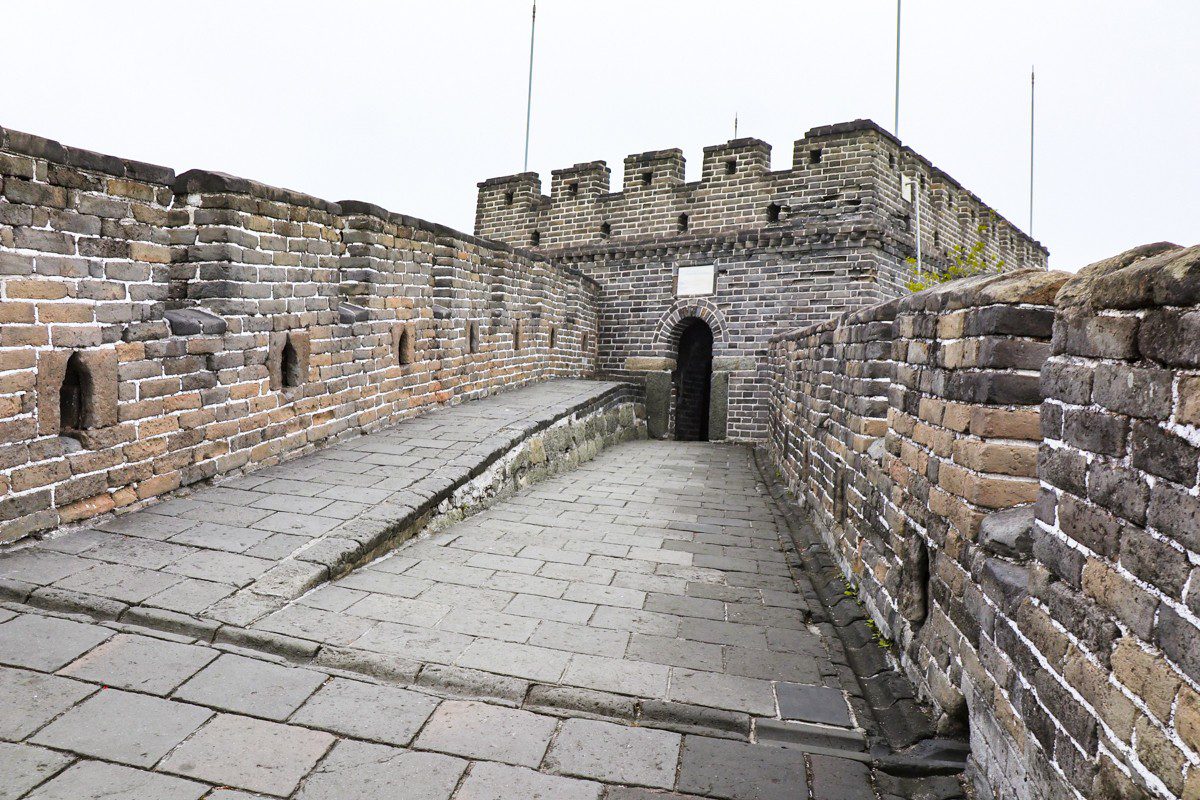 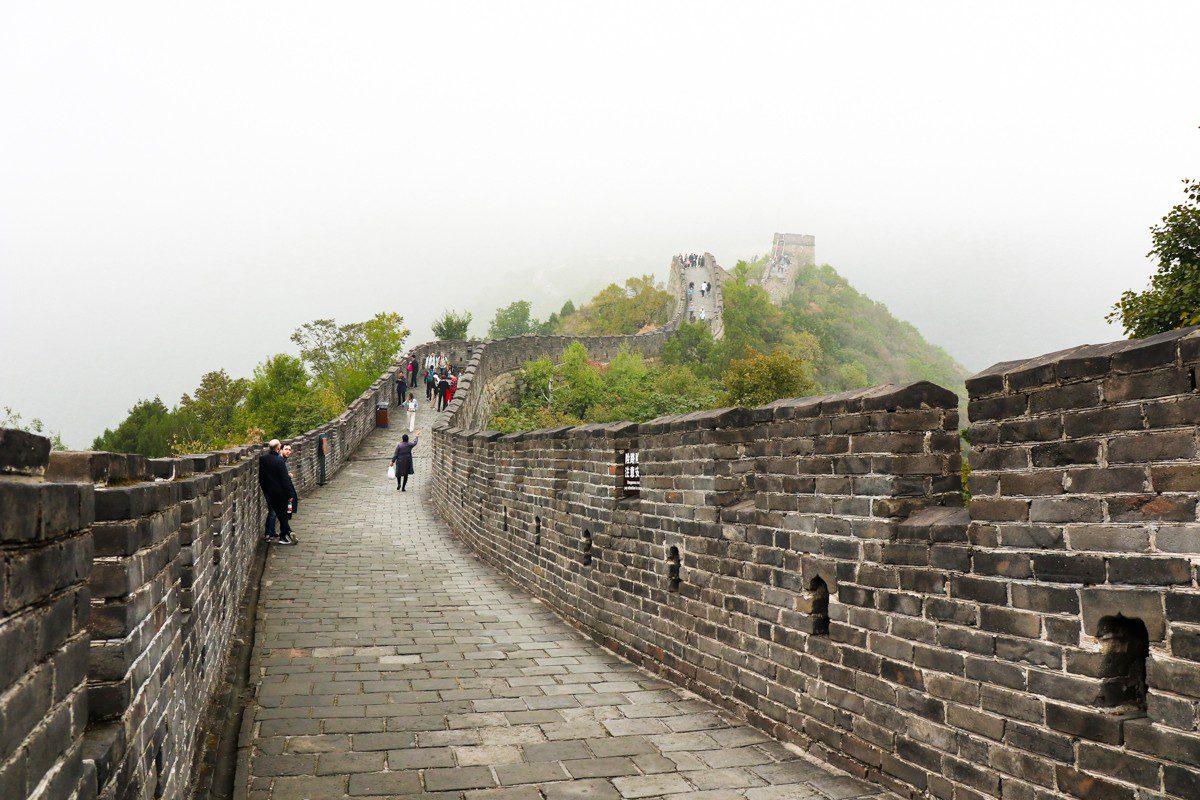 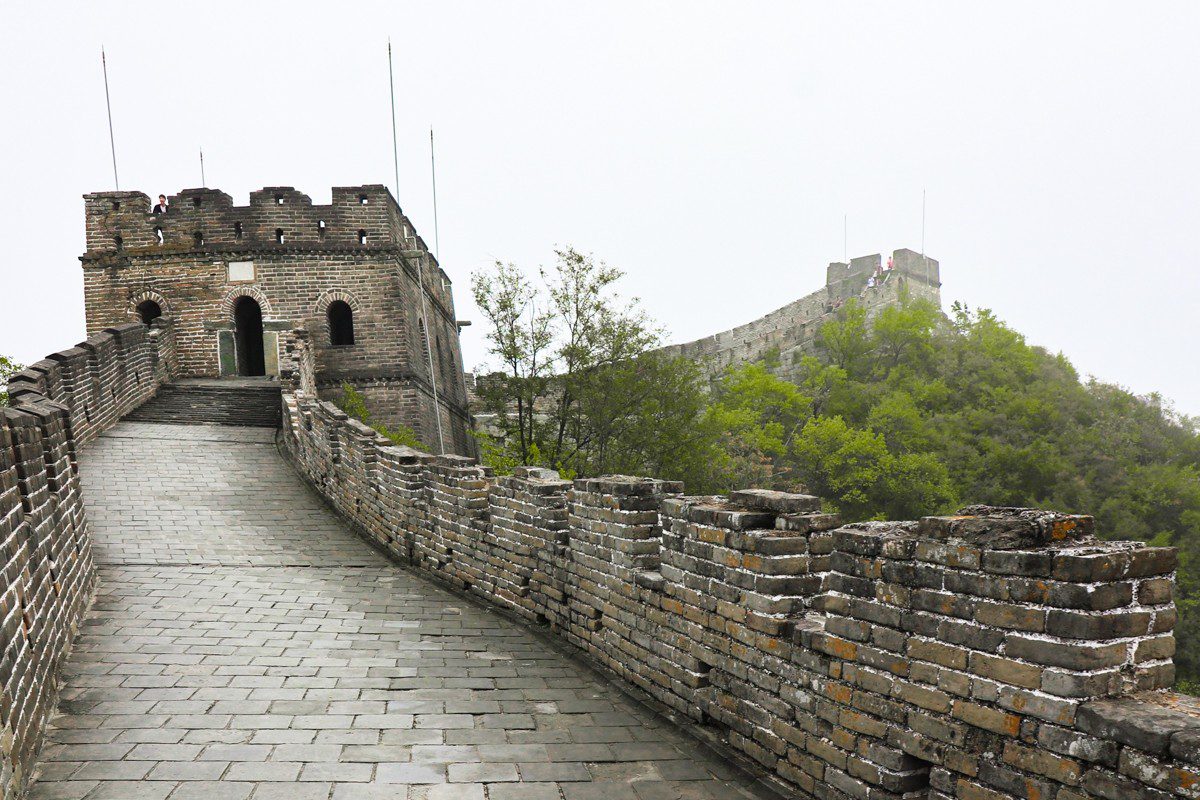 When you arrive, you first buy tickets at the foot of the wall and cross a small village-like touristy area with shops and restaurants.

I was particularly inspired by local fruit stalls!

Then you go up to catch  a transfer bus which brings you to a cable car. And finally you get to the area from where you can climb up to the top of the wall and enjoy the view! 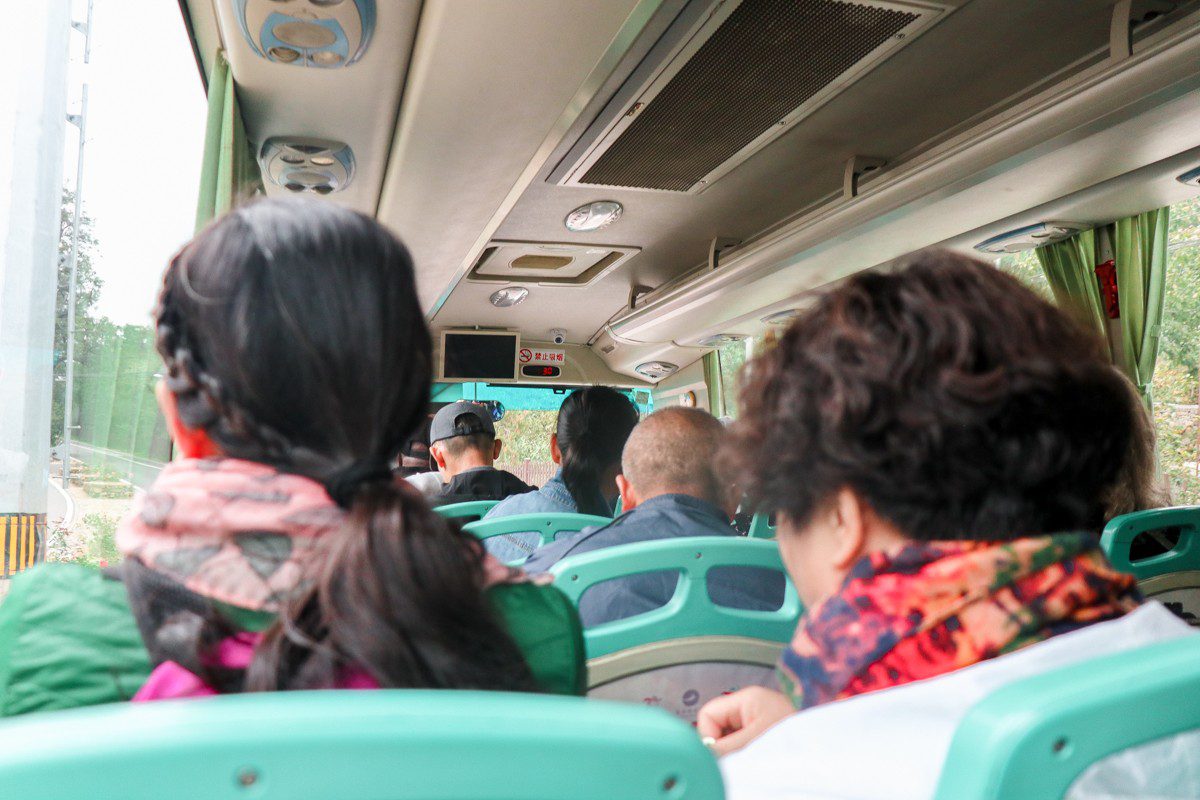 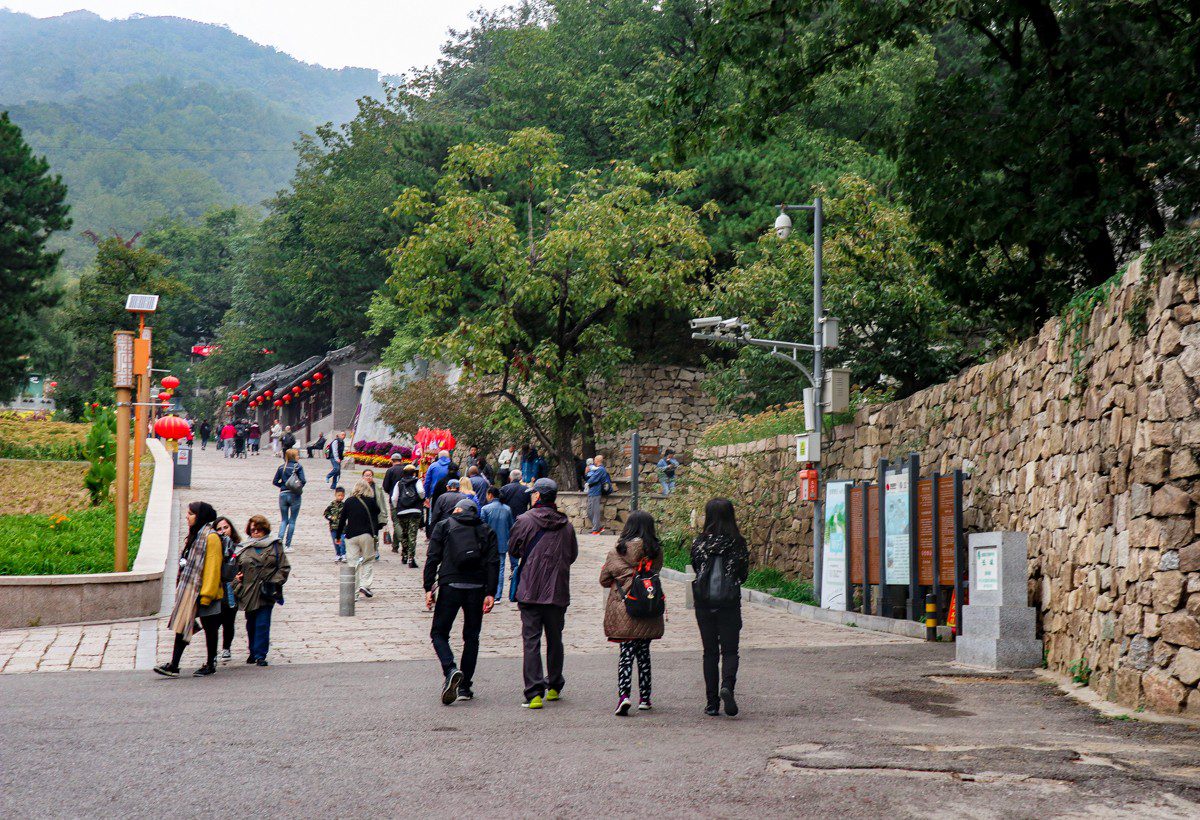 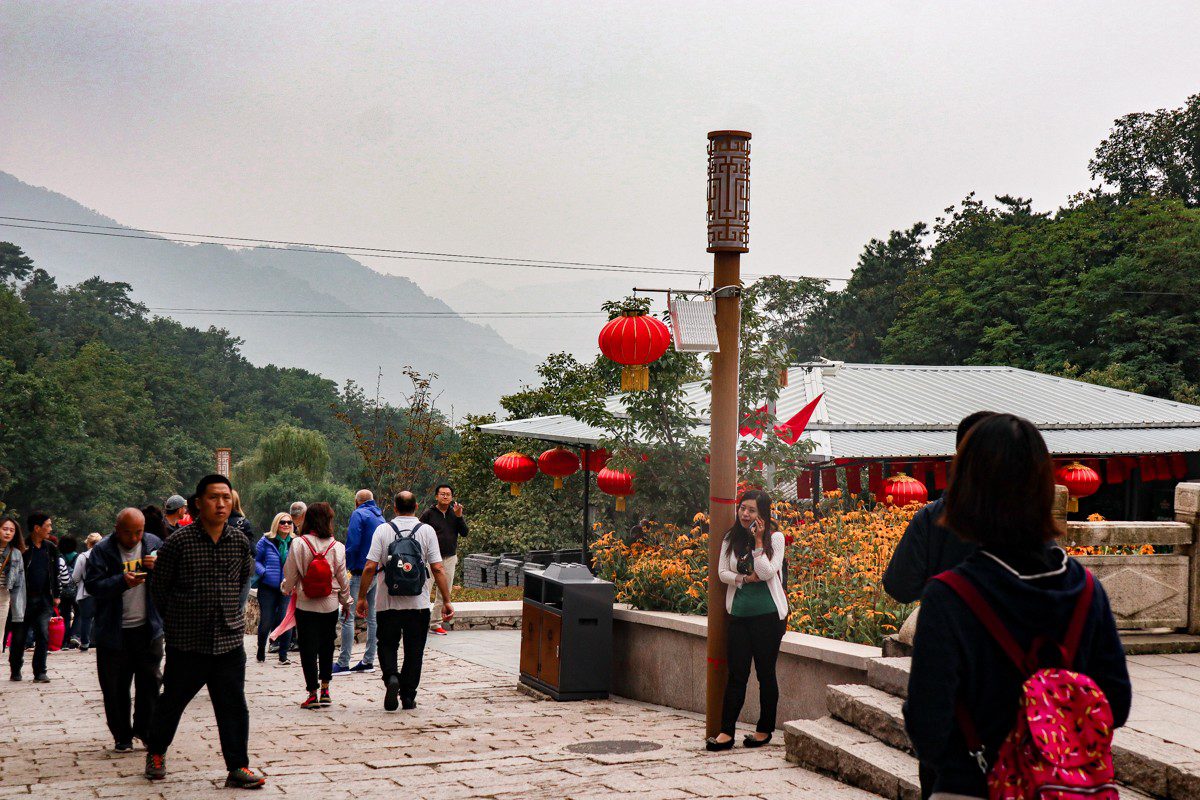 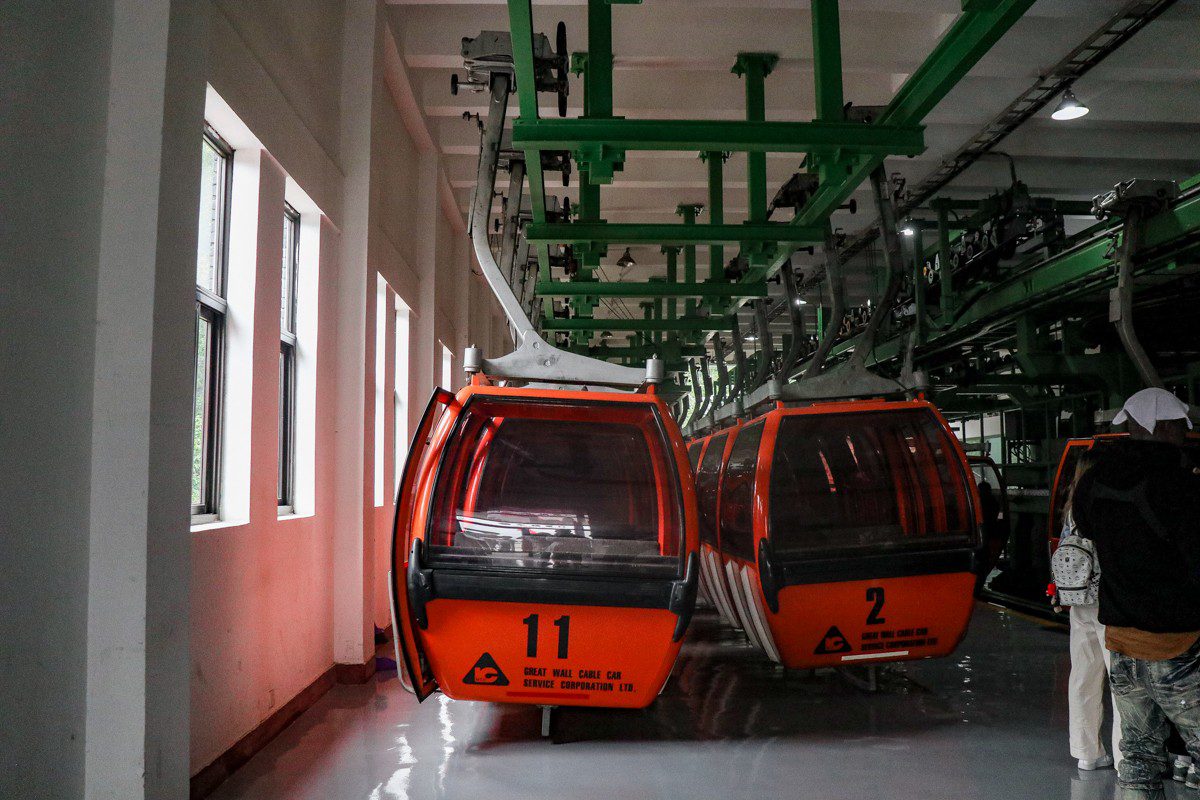 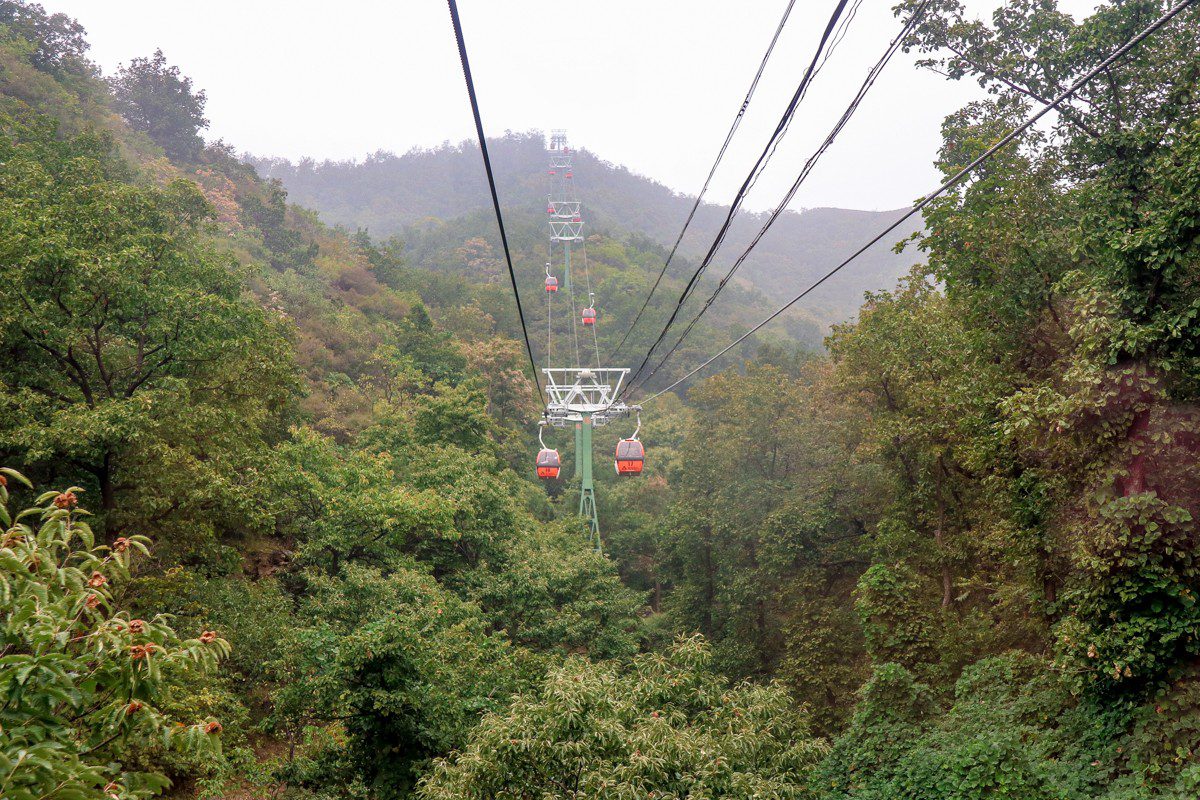 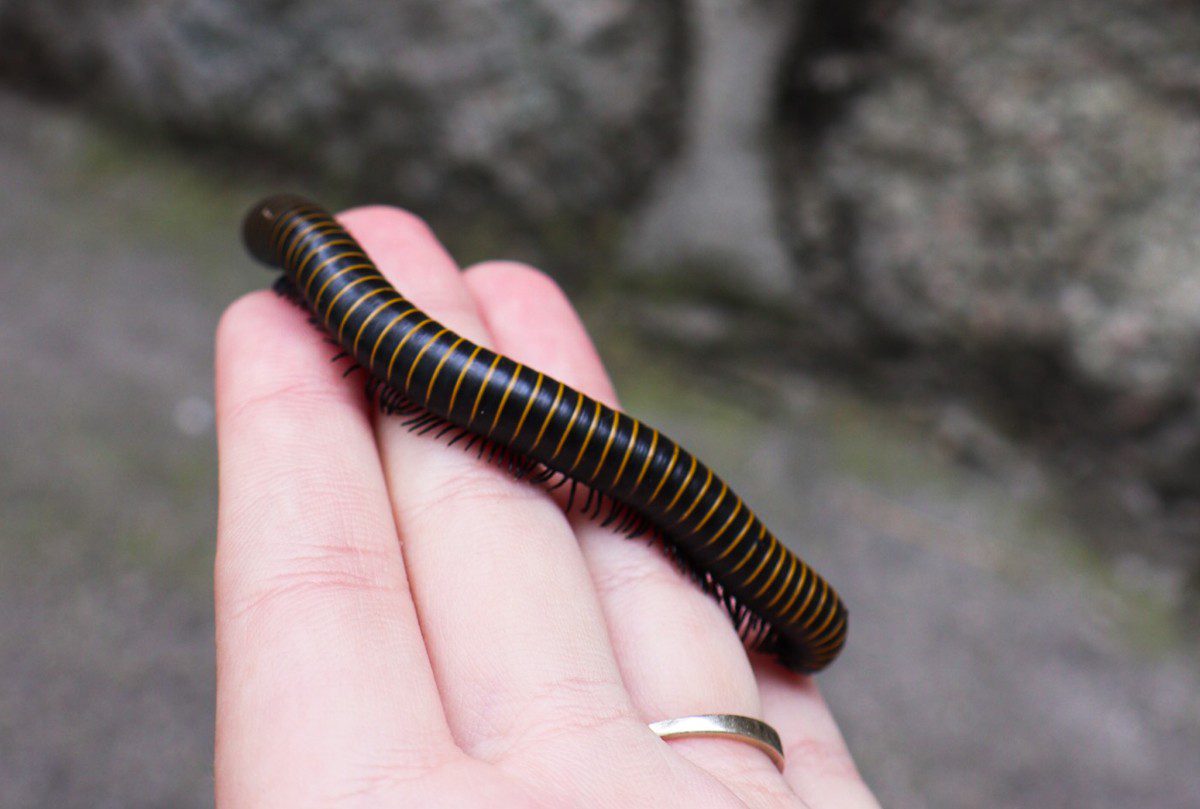 • Such a famous landmark as the Great Wall couldn’t skip a step of growing some myths around it, both mystical and pseudo-scientific. So, what is true and what is not? 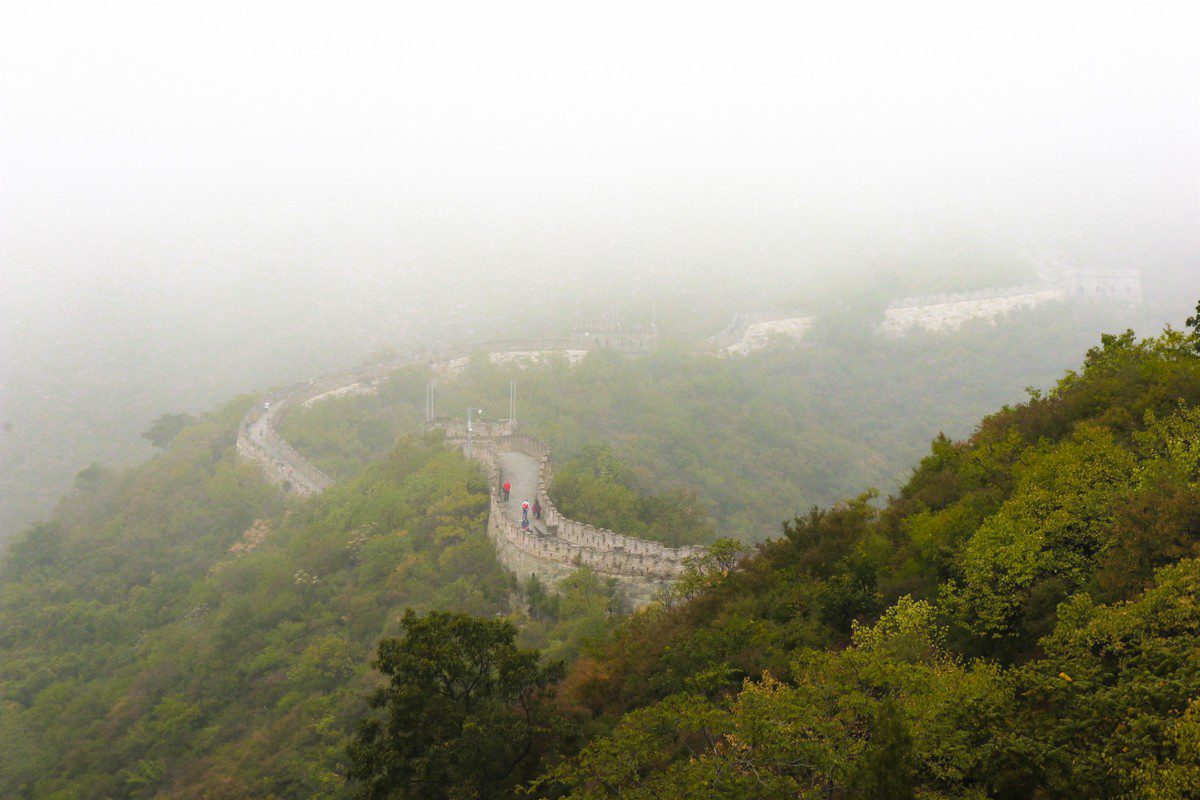 • No, Chinese Wall is not the only man-made object visible from the Moon: the wall is not visible from space (believe NASA, they know it better) but you can see other traces of human activity. 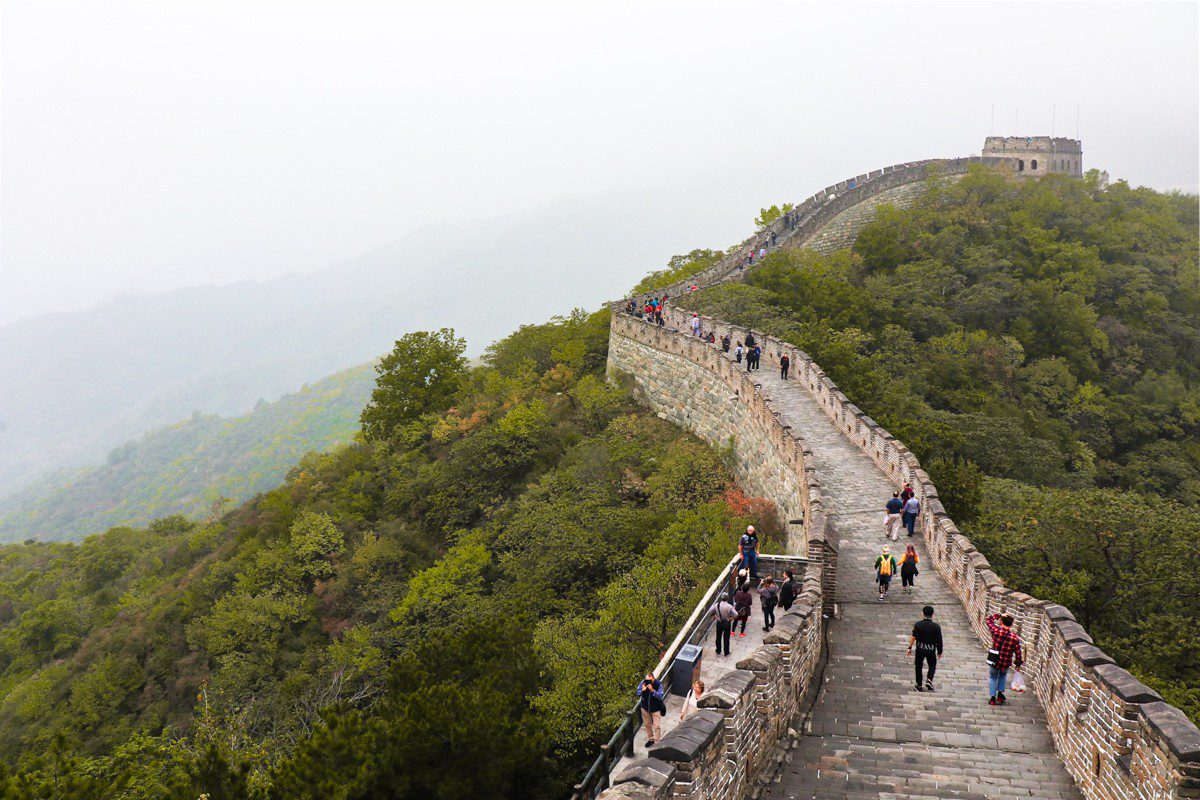 • There were no skeletons found inside the Wall (so far) so the myth that the labourers who built the wall were buried in it is still a myth.

• The width of the Wall varies greatly between different sections so suggestion that carriages could ride though the Wall freely applies only to certain locations.

What to wear to the Great Wall of China?

Layer and only layers! As you go up in a cable car, it gets colder but when you climb the wall you might feel warm again. Waterproofs sound like a good idea too.

Don’t forget to wear comfortable shoes because it was really slippery and some steps are incredibly uneven (especially when you pass the towers). As for the weather, actually it was quite warm albeit humid during our visit in October but I suppose it must be much windier and colder if you’re visiting in winter.  Don’t forget plenty of sunscreen too especially in summer season!

How to get there?

We booked a guide with a car to go to Mutianyu Great Wall section but you can go there independently on a bus or with a group tour. We were just not brave enough to buy all the tickets ourselves (speaking English and not Chinese is a real problem for tourists even when visiting the most famous landmarks) and we were able to play with the time as we wished. 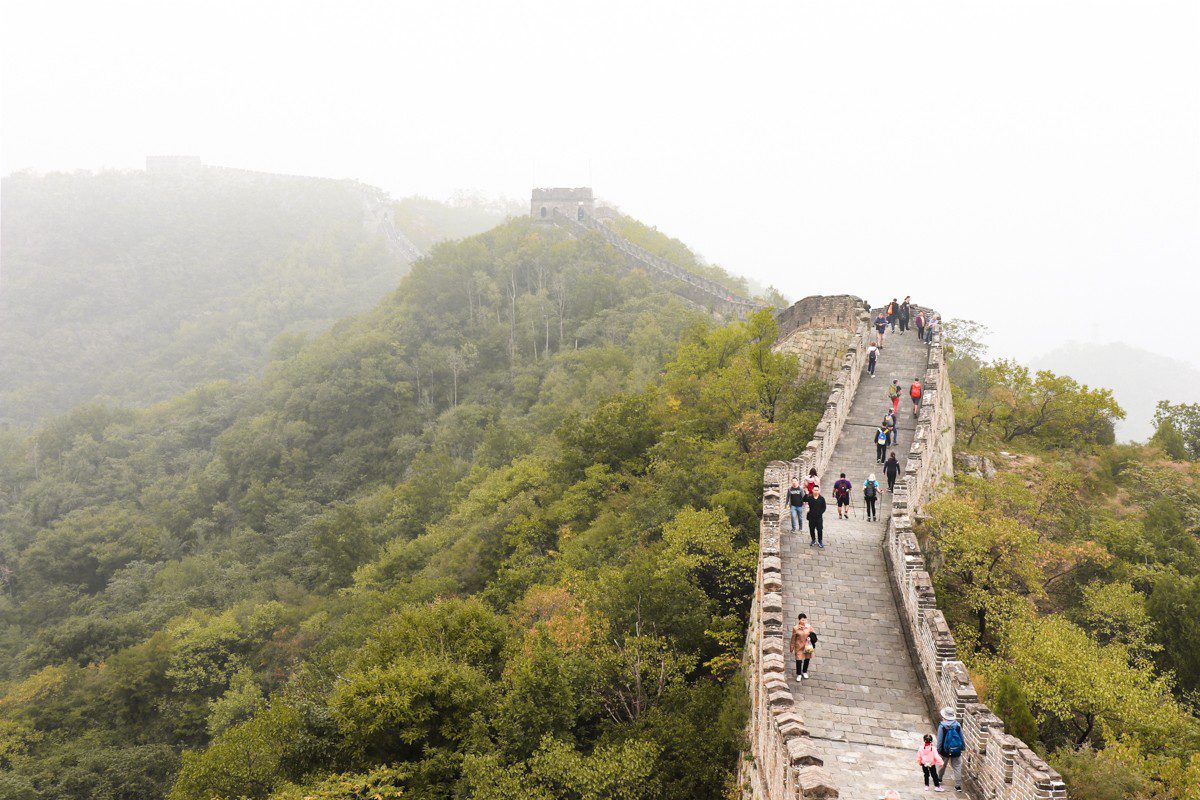 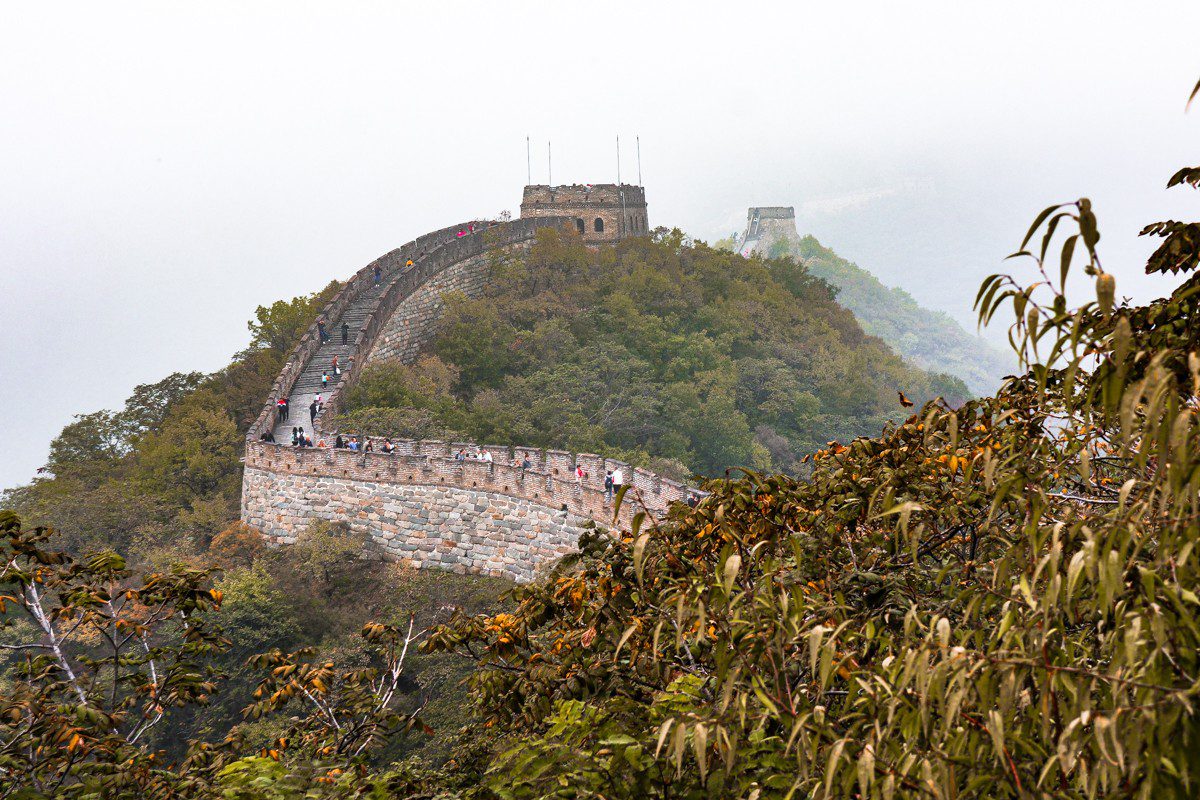 There was an option of walking for a few kilometres along the Wall but actually we chose to spend much less time there because at some point it became boring: the Wall and the scenery were still the same no matter how far you go. I suppose you can’t be that flexible when you’re in a group tour. And remember, you have to come back too! 🙂

Happy weekend guys! What are your plans? ✨✨I m

[invite] One of my favorite places to lunch with a

London today, in +27 degrees outside. Such a bliss

London why are you so pretty 😍😍😍

[ad] Nothing can beat a proper pasta 🍝 for lunc